I enjoyed this marathon.   It’s a big event and getting better

each year, a jewel for Indiana road running to be sure.

It’s not the Chicago Marathon but it has a big city feel. 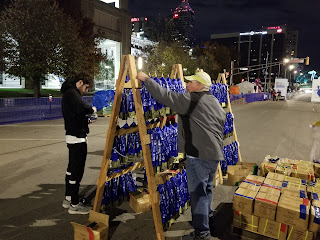 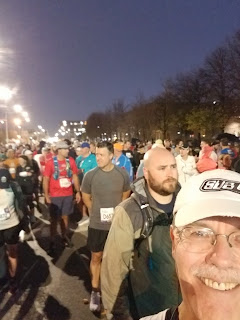 It’s too bad this year’s event was dominated by the weather.

A fierce wind directly from the south was the talking point,

20mph at the 8am start and increasing all morning.   Given

the course ran north and then back south, it meant a

monster headwind for 10 of the final 13 miles.

I was pleased with my run overall.   I ran the first half

crossed the halfway mat at 2:18:27, clearly helped by the

tailwind.    We then turned south and I held onto that pace

through mile 17, near the Butler University campus.   But,

by then, it was obvious the wind would take its toll.   So

I backed off the pace, not having anything to prove and

ran comfortably to the finish line.   The final four miles,

between tall buildings with a howling wind, were not much 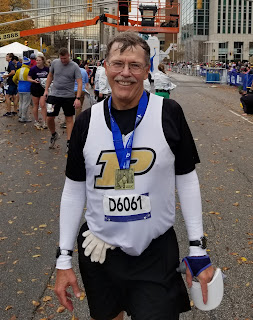 And four other experiences were memorable...one truly

strange, one ironic in light of the strange event and two musical.

It’s a given that a large road race in a city will disrupt traffic.

We’ve all seen it and you just deal with it.   But I saw something

in this race I’ve never seen before and hope I don’t see again.

About mile 8 or so, the marathon pack was still thick.  We

approached an intersection, where a guy was trying to pull out

of his neighborhood but the stream of runners was steady.   He

was OK with it, though, simply easing his car near the intersection,

trying to look for a gap.   Nothing aggressive at all.   But, about

40 feet in front of me, I saw a fellow runner start to scream at

the driver, hurling obscenities his way and giving him the finger

right up next to his front bumper.  As  I pulled even with the angry

runner, I said to him “Come on, man, just leave it alone, that

Wow, this wasn’t good.  We went on running, leaving the driver

behind but my fellow runner then turned his anger on me.  “I’ve run

this race 15 years in a row! How many times have YOU run it?”

I let him know this was 8 for me at Monumental.  “You can’t say

anything to me then!”   I looked at him quizzically and tried to

to get out of his neighborhood.”  “Oh yeah? I can yell at anyone

I put my hands up and walked, letting him continue on.   Another

runner came up beside me, having seen the whole thing and we

both shrugged our shoulders...the guy had some issues.   Yet it

didn’t end.    Over the next two miles, he fell back and talked three

more times with me, each time justifying his anger and adding

more reasons to be angry (like not enough cups at a water stop).

I’ve never seen such behavior.  He clearly had other issues.   But

driver.   I’ve seen anger the other direction but never by a runner.

Which made the second event both ironic and funny.

Around mile 15, running straight south along the right side on Meridian

Street, the biggest and most famous surface street in Indy, we came

turn lane, hoping to turn in front of the stream of runners.   Quite

spontaneously, another runner and I spotted a gap ahead of us that

would allow a couple of cars to turn.   We both held out our arms,

slowed for a second or two with the few runners right behind us,

motioned for two cars to turn and then carried on.   The drivers waved

and smiled, as we did in return.  I gave a fist bump to my fellow traffic

And then the music.

new pattern, we came up to a garage band banging out classic rock for

the runners.   They had just started playing the 1964 hit by The Kinks

a headbanger, for sure.   I started singing with them and to my surprise,

the lead guitarist saw me, walked into the street and stuck his mike out

to me...I joined in to sing the epic phrase “you got me so I can’t sleep

at night” along with him.  Wow, what a moment.   The band got a charge

out of it and we were all laughing, as were the spectators.  Later, I realized

was released but likely their parents had not been either.

Then, around mile 22, a guy with just an acoustic guitar was singing and

playing from the back of his pickup.   He was attempting The Doobie

Brothers’ “Long Train Runnin”.  Great song but he didn’t quite have the instruments or volume to

do it justice.   I tried to help him out a bit yet news of my earlier vocal

success had not reached him.   Oh well, those pistons keep on churning. 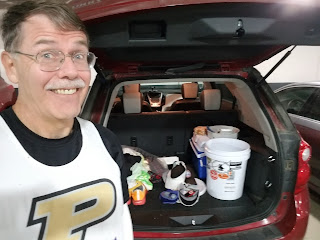 When I recorded the race results later, I noted my time was a mere 33 seconds

faster than the Carmel Marathon nine months ago, also in Indy, also on a

windy (but much colder) day.  Despite the identical times, the Carmel race

felt truly miserable for me at the end, while this race was enjoyable and just

kinda long.   I realized two key things that made a difference.   First, and primarily,

I had many more training miles ahead of this race, averaging 150+ per month

all summer and fall, vs 120/month or so leading to the April race.   Secondly,

half.   Good reminder...get the miles in and take it easy early.

That’s the story.   And better to laugh with a garage band than yell at an

Great report and congratulations! That's so crazy about that guy. You are right that he clearly has issues. Anyway, you got it done AGAIN!!

Nice work! (Formatting is off on the post and cutting off the right side of the text but I can pick up most of it.)