The HUFF 50K on December 28, 2013, was a most enjoyable ultramarathon.  The weather was kind, very kind, the course was welcoming and the people friendly as always.

The HUFF 50K has a long and storied tradition, both in Midwest ultra running and for me personally.  It's been around for 17 years now, a fixture on the calendar either right before or right after Christmas, depending on where in the week the holiday lands.

I first ran the HUFF in December 2004...9 years ago.  Here's a photo of me at the close of that race.  At the end of this post is my photo after this year's race. 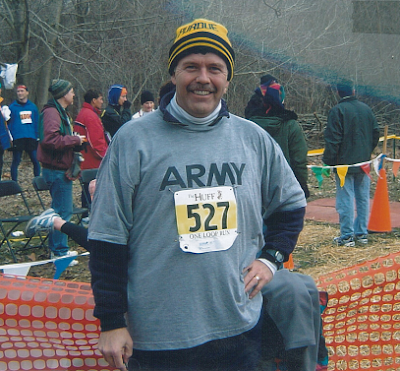 The HUFF offers both the 50K and a 10 mile option.  I took the latter in 2004, only 8 months after I started my second era of running.  Before that date, I had not run farther than 8 miles in the new era and had never run on trails.  The HUFF that year served to show me I could run longer distances and also gave me a taste of the exhilarating and challenging elements of trail running.  It's a hoot to read my blog post from the 2004 race and see how my view of running has evolved.

Fast forward to this year's race, now in its third edition in a venue 25 miles north of the one I ran in 2004.  I've run all three of the 50Ks at the eponymous Chain O' Lakes State Park.  Both long-time readers of this blog might recall my deeply philosophical report on the 2011 race (with knee deep, 34F water throughout...still the hardest race I've ever run) and the happier (and shorter) report on the 2012 event (a pleasant day in the woods, with snow wafting down and me taking a hard fall).

I drove up the night before the race and stayed in Columbia City.  Given the new diet I moved to nearly three years ago now, the traditional runner's "carbo load" dinner has given way to a perfectly sized spinach salad for supper.  Thanks, Bob Evans, for having such healthy option on the menu!! 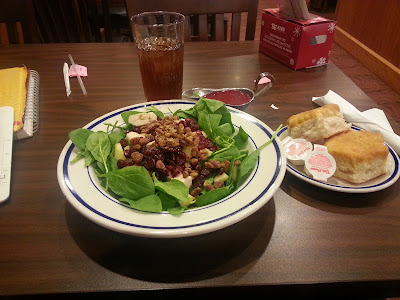 I checked into a motel, where the desk clerk remembered I had stayed at the same place the night before the Veteran's Marathon about 7 weeks ago.  That's impressive when someone remembers an individual like that.  After a reasonable night's sleep, I was up at at oh dark thirty and was parked in a primo spot at the race site at 5:45am.  I picked up my bib and stayed warm in my car, enjoying oatmeal and thinking about the day.  Or should I say "over thinking".

"Over thinking" is an issue for me generally and it all hit home for this race.  The temperatures were forecast to start in the low 30s and get into the mid 40s by the end.  That overlapped the temperature at which I shift from wearing tights to shorts.  Yet, the actual temperature, even before dawn was 34.  Back and forth I went, but ultimately decided to wear shorts, if for no other reason than to simply say I ran in shorts at the end of December in Indiana.  This proved to be the right choice...it was perfect to be in shorts all day.

My other "over thinking" didn't work out so well.  What shoes to wear?  I had brought two pairs of my usual Brooks Adrenilines with one pair modified with sheet metal screws in the bottom, as shown below (and blogged about here ). 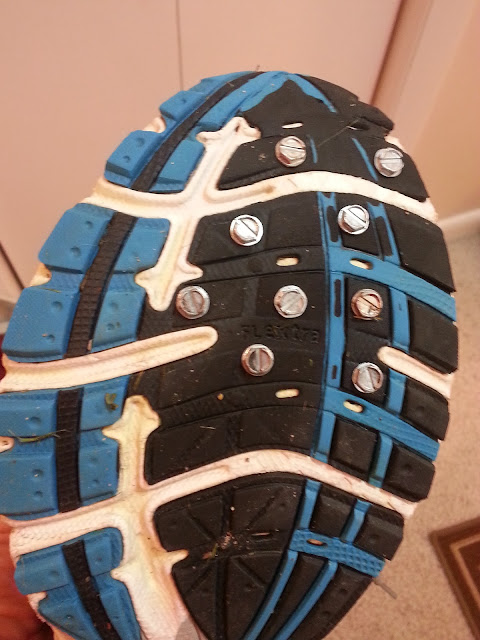 My decision rested on what trail conditions would be.  From the weather and what trail reports were posted on-line, I expected to encounter mostly dirt with some mud.  So, I ultimately chose to not wear the screw shoes.  That proved to be a mistake, as I'll describe.

The sun rose and the nearly 900 runners in all events (460 50Kers and the rest in a 10 mile loop and a 50K relay) gathered.  As usual with logistic delays getting people into the limited parking in the park, we started 10 minutes or so late.  During the wait, the assembled Marathon Maniacs quickly posed for a pre-race photo...sure good to see many of these folks at yet another event. 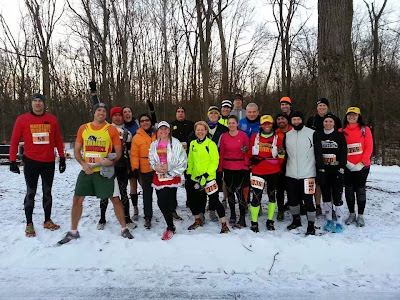 The gun went off, we had a short run on a park road, then turned into the woods.  You can see me making this turn, towards the left in shorts, a minute or so into the race. 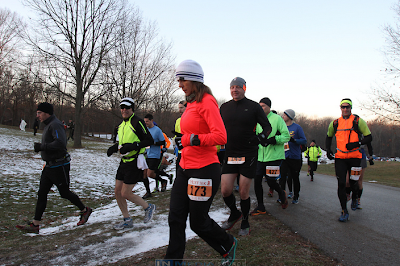 There was more than a little snow on the ground.  Unexpectedly,  a localized snow squall put about an inch of fresh snow on the ground in the park overnight.  As we began the race therefore, I quickly found I was running on packed, slick snow, pushed down by all the runners ahead of me, not the bare dirt I had planned on.  I was surprised by this and kept expecting it to clear.  This saga would continue.

Other than that, man, what a wonderful day it proved to be to run!!  The sun had just risen as we  headed into the woods.   The empty trees gave a constant view of a cloudless blue sky and the modest 7mph southwest wind was of no consequence and kept the temperatures warming.   The course along the lakes in the park yielded some fantastically beautiful views of the sun reflecting off the icy surface of the lakes as you can see in this photo one of my fellow runners snapped early in the day. 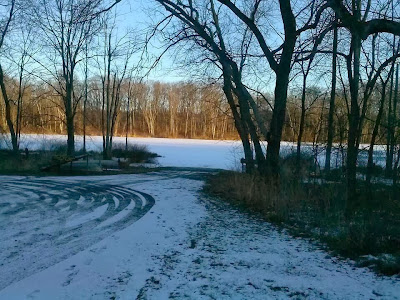 With more clarity of thought, I had decided  to use a 3/1 run/walk sequence, as that pace lets me go comfortably over long distances.  Once the crowd thinned by mile 3 or so, I shifted into that sequence and the day settled into a rhythm.

Around mile 5 or so, there was a stream crossing which represented the only real water on the course this day.  Here's the sequence when I came to it...you can see the "conga line" forming to cross on the stepping stones rather than going calf deep through the stream. 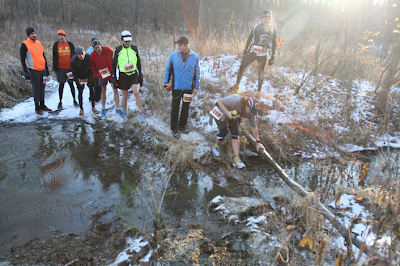 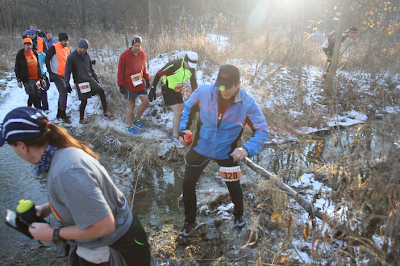 That crossing done, the course just rolled along.  By this time, it was warming and I soon stuffed my bulky mittens into my fuel belt.  It was perfect to run in shorts.

During the final portion of the first lap of the 15.5 mile course, I reverted to over-thinking mode regarding footwear.  I had not put my screw-shoes into the drop bag at the start/finish line.  These homemade beauties were still in my car and getting there would require an extra half mile or so of running.  Should I do it?  You can see the internal debate.  I finally decided that I would swap the shoes, despite the necessary detour.  At least I had scored the good parking spot.

I came across the timing mat in 3:01:05, thrilled to be at 3 hours half way through.  I then dashed up the hill to my car, changed shoes, dumped my bulky mittens, texted my wife and nephew/brother John with news of the race so far and asked an unsuspecting but helpful passerby to snap this photo of me.  She admonished me to look enthusiastic...I guess an "over thinking" face looks worried, not happy!!

From there, it was back on the course.  And, within a quarter mile, I could tell the difference.  Even though the rising temperatures had melted some snow, the ground was still icy and the screws truly gripped a lot better.  I wished I had worn them from the start, both for the grip on lap one and to avoid the 8 minute "pit stop".  But, hey, we all learn.

And lap two proceeded comfortably.  Mostly, I was alone in my thoughts with just a few conversations.  One of the funniest happened on a hill climb.  Many times, people have initiated a conversation with me based on a race t shirt I'm wearing.  But this was different...a lady I passed asked "So, did you enjoy the Bayshore Marathon?"  Wow, how did she know that...I'm wearing a Brooks night life vest with no advertising.  Then she said "I have a pair of socks like yours."  Sure enough, in all my trail runs I wear the socks which were a giveaway at that race with the race name knitted around the top.  And this lady actually spotted my socks!!  What a hoot.  We had a nice chat.  All due to a pair of socks.

Mostly, though, the race was about the scenery and serenity of the woods, well captured in this photo. The miles just kept clicking by on the second lap, which always amazes me.  How is it this thing came to be, where it is enjoyable to simply run and run and run??  I never lose the enjoyment of that fact.

By mile 26 or so, I noted more labored breathing, accompanied by a soreness in my left hip, around the abductor muscles.  What to do?  I didn't over-think this too much, for once.  From experience, I knew I needed to keep hydrating and I also decided to cycle back from the 3/1 to a 2/1 run/walk ratio.   Mentally, I was a touch discouraged to hit the hit the 26.2 mile mark at about 5:29...gee, a five and a half hour marathon, that didn't do much for me.  But, hey, guy, this is a trail ultra and you also spent 10 minutes changing shoes and posing for a photo!!!  OK...let's just keep moving.

By mile 27, the slower pace allowed me to recover and the good feeling came back.  The last four miles of the race were pure fun.  I ran well during the run segments, enjoyed the woods when I walked and was thankful for the whole experience.  About a mile from the end, I came by a four-way trail intersection which was familiar to me since this is my third time to run this course.  Not so for a young couple who had been just ahead of me for some time...they very nearly made a wrong turn and would have run three extra miles rather than heading for the final mile towards home.  They looked around, slightly confused, and asked directions.  I was able to help them and we all had a good laugh about the "brain mush" which happens after 6+ hours of running.

And home we headed.  We crossed the park road for the last time and I ran continuously the final 3/4 mile.  There was a nice collection of runners and family around the finish area and the smiles and cheers truly helped.  I hit the finish line, feeling just fantastic and so thankful.  Marathon/Ultra #45 was done. 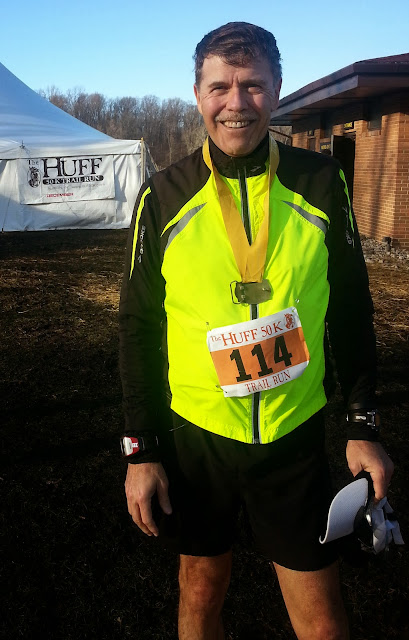