It's no surprise Grand Rapids, Michigan has heavy snow and cold temps in early February; this described conditions for this six-lap marathon.   Tough, powdery footing effectively turned it into a trail race.  What WAS surprising was that decent layers allowed it to be surprisingly comfortable and a marathon in the snow was an enjoyable long run.

I ran this race for the first time in 2020, which turned out to be the last big race we’d have for quite some time amidst the Covid pandemic.   So, I decided to have a go again in 2021, wanting to get in some racing after so many cancellations.     Running buddy Jon and I also had our first road trip in over a year; that alone was worth the trip.  We drove up on Friday, got our bibs and slept reasonably well.

This race commemorates not so much Punxsutawney meteorological prognostication as it does the movie by the same name.  The theme of the same thing, repeating, captured what the RD felt about running six equal-length laps for a full marathon.   For me, I thought, “Only SIX laps?  How stimulating!”

The course is in a city park along the main river of the city of Grand Rapids, conveniently named the “Grand River”.  The first two miles are quite flat, directly above the river bank.   The course then loops meanderingly over a few rises and dips for 2.4 miles back to the start/finish line.

This is relevant since GR had had at least a foot of snow in the few days ahead of the race.  And the parks do not plow the portion of the trail along the river, preserving it for cross country ski activities.   Thus, the first two miles of each loop was running in a narrow, single-track path based on the footfalls of runners ahead of me.   This improved for about a mile and a half of the loop back to the start/finish but then got more complex again as the final portion was in a windy spot that continued to drift from the 15mph west winds that picked up as the race went on.   The entire course was thus run on 100% snow pack...it just varied a bit as to how deep and fluffy that pack was. 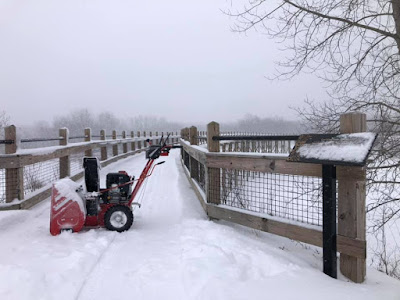 The RD did a good job to allow the race to happen and still encourage social distancing. He communicated a lot with us and opened the start mats at 7:00am and allowed people to start anytime they wanted between 7 and 8am. Jon and I decided to start around the time we had daylight, 7:25am. The hardest part of the entire day was choosing to get out of the warm car into the windy, cloudy, dark 12F and start running. 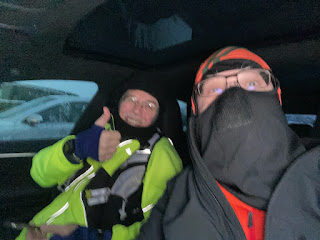 Off we went, though, Jon doing the HM and me the full.   We wished each other well and took off.

I wore my trusty "screw shoes" and was really glad I did...that extra traction helped a lot, particularly where the snow was packed. 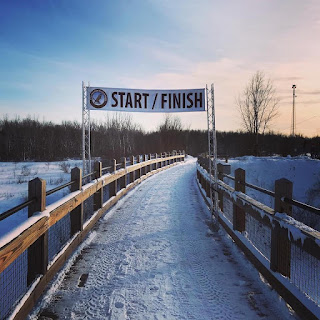 I immediately discovered the depth and bad footing of the deep portion of the path along the river.   By a mile or so into the course, it was clear to me it would be best to regard this as a trail race, not a road race...the footing was everything we find on a trail event, as each step landed differently and you had to watch carefully to avoid doing a very cold face plant. 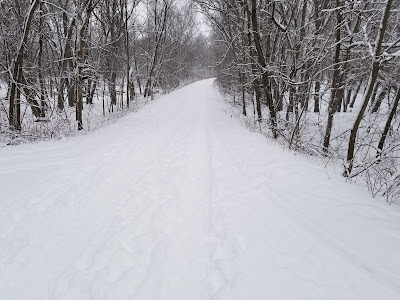 So, I modified my expectations, dialed back to a 3/1 run/walk and realized the day’s objective was to finish, enjoy it and avoid injury.    Many of the portions of the wooded section were very pretty, with snow clinging to every twig. 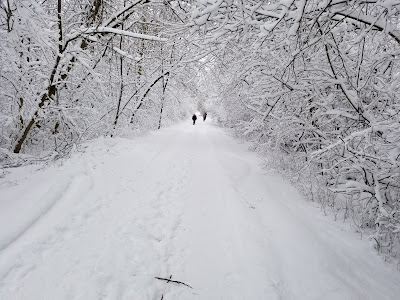 And that’s pretty much the way the marathon went.   Not much exciting to describe...just lap after lap. 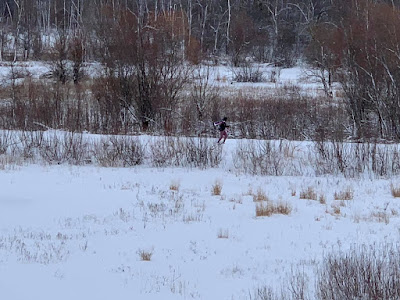 I was pleased to eventually get my lap times...they were consistent through the first four and at least the last two were equal, meaning I was steady from mile 18 to 26.2.

Much slower than a year ago but such were the conditions. "Run the best race conditions allow"...it still holds. 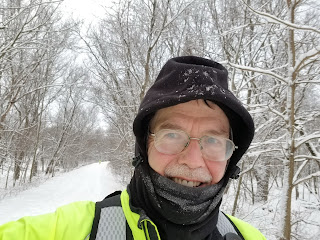 Jon had the car well warmed up and we headed home right after I finished.   I felt fine, not having the stiffness I usually feel after sitting the car ride home from a race.  I’m not sure why, as the footing was so uneven.  But I’ll take it.

Cookies:  At the HUFF 50K, I noted how helpful a couple of oatmeal raisin cookies were to chow down during the event.   So, I tried that again, making a tasty bunch of large, chewy cookies to eat rather than some gel.   Winner...I ate one or two each lap and it was great fuel.   I’ll keep doing this at races where I can stash them along the way.

Running vest;   For years, I’ve tried to get a good system for carrying water while running.   I’ve had several belt systems but I didn’t like the way they sat so heavy around my waist.   I got a running vest with a water bladder but, man, that takes a lot of energy to such the water out of the bladder and, besides, it was only water you can put in a bladder.   But, it occurred to me, I could still use the vest without the bladder and carry water in the front pockets.   Boom...worked great at Groundhog.   Made up my favorite electrolyte, put it in an 16oz soda bottle and that was all I needed...the weight was negligible on my shoulders and it was wonderful.

The Cooler becomes a Heater:   With the lap format, I knew I could set up my own aid station.   But how to keep fluids from freezing in the upper teens?    I turned my small cooler into a “heater” by using no ice and tossing in a couple of hand warmers to raise the temp above freezing.   Worked perfectly.

So, that’s it.  Don Kern and his crew do a great job organizing fun racing in the Grand Rapids area and we're all the better for their efforts. 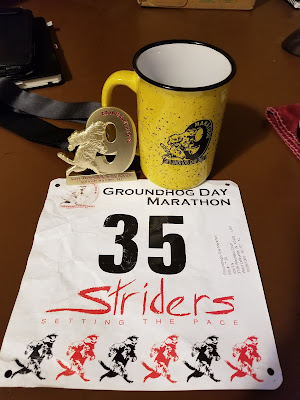