The rule of thumb that the sorest you'll be is two days after the run is certainly true. I had a very enjoyable 17.5 mile run on Monday and woke up this morning pretty stiff. I got out the door, though, and had a very easy five miler. And, as usual, after the first couple of miles, the legs loosened up, I got moving more smoothly and the run was in the books.

And, after a loooooooong Midwest winter, I can't tell you how good it is to just toss on a shirt and shorts and head out the door in the early morning. That alone makes the running worthwhile.

Looking ahead to the next event, the nation's largest half-marathon in Indy on May 3 (also known as "tres de Mayo" in Indiana), the weather may not be all that good...looking like it will be warm and possibly muggy. Makes me very glad I pushed for a good time in the first of this series of five spring half marathons. It sure is fun, though, to have a series of races fall together so nicely.

Also, a quick shout out to blogging buddy David who is running the Country Music Marathon in Nashville this weekend. Enjoy the hills, David, and persevere to the end!!
Posted by Joe at 6:51 AM 9 comments:

What a treat! After groggily dragging myself out of bed for a five-miler in chilly 31F weather, I got a unexpected thrill.

My favorite Cumberland Woods route takes me 2.5 miles west then I turn around to head home. I slogged through the out portion, not very awake, thinking about a very, very busy day ahead of me.

Then I hit the turnaround point.

The cold weather came with a high pressure system which made the sky cloudless. By this time, the pre-dawn light was just barely visible over the eastern horizon. The palest of pinks, grays, purples and blues danced slowly with each other as I made my way back home. The entire tapestry of light was painted before me. Birds, just returned to the Heartland after having the good sense to winter farther south, were singing their hearts out. No humans were around, the trail was just out there, alone, with the sky, the birds and me clomping along. It was indescribable.

On the front end of a work day which will extend past 11:00pm tonight, it was a marvelous morning. I hope yours is as well, as you persevere.
Posted by Joe at 6:53 AM 11 comments:

It was a big day today for our family. My oldest son David was given his honorable discharge from the US Army yesterday after nearly 5.5 years of service. He arrived back home early this morning.
David was in boot camp when the US invasion of Iraq took place. He served a 12 month tour on the DMZ in South Korea plus 12 and 15 month deployments in Iraq. He has just been away from his wife and three kids for another 2 months outprocessing at his base in Colorado Springs.
We're glad to have him home. 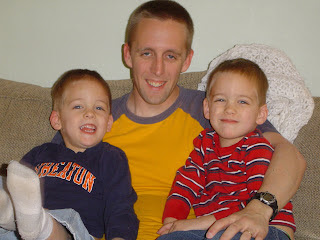 I first caught up with him at noon today, after he'd had maybe 3 hours of sleep. While young Miss B was napping and his wife was teaching at her post at the local community college, David was just enjoying being with the 4 year old twins...who were waaaaaaay less sleepy than Daddy. Never mind...it was all right, being together again.

Plans are for David to take some time getting reaquainted with the family he's missed so much of, then begin coursework in the fall towards a Physician's Assistant degree, building on his Army medic experience.

Rejoice with us...we've all persevered.

The first time I’ve ever run half marathons on back-to-back weekends. I shot for a 2:05 on this hilly course and beat that, with a negative split to boot. Cool and clear, another perfect day for running made for a most enjoyable outing.

“So you are running a race tomorrow in Bloomington?”

It’s another half marathon, the same as last weekend.

“And what time do you have to leave in the morning?”

A pause and a smile; “And you regard this as huge fun?”

I just smiled in return. She loves me a lot.

I was up at 4:30 and backing out of the garage at 5:00am. (Gretchen reported later my departure didn’t disturb her sleep!) The 2 hour drive was uneventful, as was check-in. The temperature at the start was around 38, with projections to the mid 40s by the end of the race. Sunny skies and no wind made this quite enjoyable…a couple of technical layers and gloves were quite adequate.

Work and life intervened this week and I only had a single 5 mile run since last weeks half marathon. I wondered what my goal to “Run the best race conditions allow” meant this week. I concluded, rather quickly, the race would not be as quick as last week. It was a new course to me this week (vs the known course last week), a hilly course (vs a flat one) and my legs were not as fresh. David encouraged me not to over think this race and I didn’t. A target of 2:05 seemed about right; I wore my clunky Brooks Beasts and determined to just enjoy a lovely day.

The race started on time. I estimated about 800-1000 folks ran. We wove in and around the campus of Indiana University, a beautiful place, and the college town of Bloomington, Indiana. The course was quite hilly; I would guess there wasn’t more than 1 mile of the 13 even close to flat. We were up and down all the way.

During the Sam Costa race last week, a fellow runner observed the first six miles or so seem to crawl by, while the last mile seem to start clicking by very quickly. I’d never heard that so succinctly; I found it to be true last week and the same thing this week. All of a sudden miles 8, 9, 10, 11 just clipped by. The second half went really quickly, in my mind.

My legs felt heavy during the first few miles, worse than last week. But they seemed to perk up around mile 5 or so. By the time we got to mile 12, I knew I had gas left in the tank, so cranked it up a bit. Mile 13 went by in 8:53 and the Garmin told me I ran the last tenth, a downhill sprint to the finish line, at a 5:52 pace. It was very nice to see 2:03:11 on the watch. The organizers had a great finish; plenty of water and food, a nice medal, a great shirt and all for 25 bucks...a terrific value.

This has nothing to do with anything but it puzzled me during the race: Why do college kids not wear gloves? There were a lot of fresh-faced, intelligent-looking kids helping to direct runners on this chilly morning. But not a one of them had on gloves. Shirts, hoodies or coats were pulled down over their hands, shoulders scrunched up to keep the hands in the sleeves. All of them. My son, in college, won’t wear gloves either. Why?? I don’t understand. And I sound like an old fogie…

I had a first after the race. I was walking to my car when a man drove by, rolled down his window and said "Are you Joe Ely?" Well, yes. "Great! I read your blog!" How cool. Randy, thanks for stopping by and talking...it was great to meet you and your pal. Good luck in the Flying Pig! 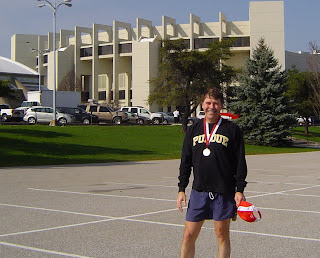 As a proud graduate of Purdue University, I couldn’t help having some fun with our archrival Indiana University. So, after the race, I pulled on my Purdue shirt and had my photo taken in front of Assembly Hall, IU’s palace of basketball, former home of Bobby Knight and Kelvin Sampson. Go Boilers...we don't have scandals.

It was a fun day. Race 2 of 5 in the spring series in the books. I’m enjoying it.