You've heard the old saying about that great vacation you had: "Yeah, you can never go back."   It's often not the same the second time.   Such was the Sandhills Marathon on June 5, 2021.   I first ran this race in 2018 and, as I wrote at the time, it was a phenomenal experience, indeed in the top 5 of my lifetime marathons.   Weather and the course changed dramatically this year however and so did the experience.   Nevertheless, it was terrific to run in my home state and have much time to be alone.

The 2021 edition of the Sandhills Marathon became an anchor point of the first post-Covid, post-retirement road trip for my wife and me.   We drove 2,800 miles in nine days making a giant counter-clockwise loop from Indiana to Minneapolis through South Dakota, Nebraska, Missouri, southern Illinois and back home.  It was a fabulous trip and the two of us totally enjoyed the time together and all the scenery in the west.

We spent two days at Badlands National Park near the Black Hills of South Dakota.  Amazing and beautiful.   We did a good bit of hiking.   How about this landscape? 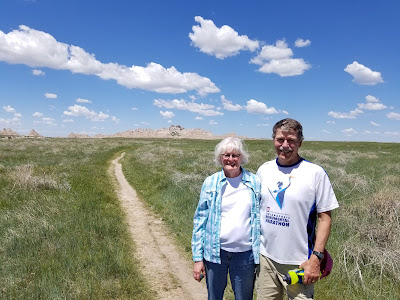 I shot a video along that hike...enjoy 90 seconds of prairie solitude.
From the Badlands, we took a spontaneous detour to Rushville, Nebraska to visit a baseball field where, in 1970, my American Legion baseball team won the Nebraska state championship.   That's a story in itself...it was a thrill for me to visit the same ball park again.   I was the catcher on that team.   Here I am behind home plate now. 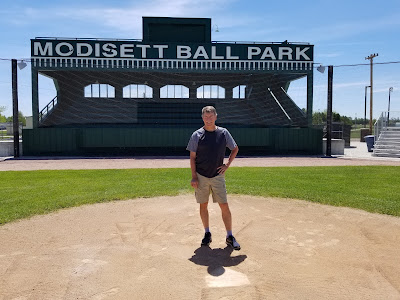 And here's our team photo in front of the same grandstand after winning the state championship in August, 1970.   I'm the fourth guy from the left on the back row. 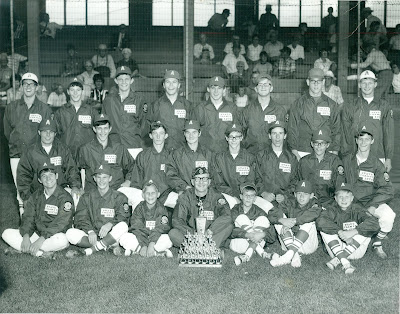 It was a treat.
I really wanted Gretchen to see the Nebraska Sandhills ( image collection ) such is its beauty and uniqueness.   Like the Grand Canyon and other massive places of natural beauty, you have to see it in person to grasp it.   She grasped it, getting what I had been talking about.
On the day before the race, we were drove all over the area, took a hike to an abandoned fire tower built in the '30s by the Civilian Conservation Corp and generally bask in the stark beauty of the place.
To the race....
Pre-race, the organizers sent out very little information.  One cryptic bit, however, gave me pause about the actual course...that's basic race information, describing the route and its surface.   Yet it wasn't clear and appeared to be a different course from the one I had run three years ago.   Further, from some photos, it appeared to be a gravel.     Five days before the race, the RD answered a question I posted on FB about the route, confirming the route was different from 2018.   The surface question remained unanswered until my wife and I drove it to see for ourselves.   It was, in fact, asphalt.   Yet, that remained a question mark for me up until the day before the marathon.
With only 35-ish marathoners and maybe 45 half-marathoners in the event in this emptiest part of a sparsely populated state (the Sandhills contain 4 of the 10 least-populated counties in the USA), race check the night before was simple.   The start line was a 50 mile drive from the nearest hotel, so the 6:00am gun required a 4:45am departure which required a 3:45am alarm!   I awoke on race morning, slipped out of the room to let G sleep and encountered four other sleepy runners noshing on toast in the hotel lobby.  I had arranged a ride with a fellow runner and we had a nice chat on the drive in the dark.
We assembled in the small parking lot that was race HQ.   Yes, this is the entire marathon field!!  No loudspeaker required...the RD just spoke loudly. 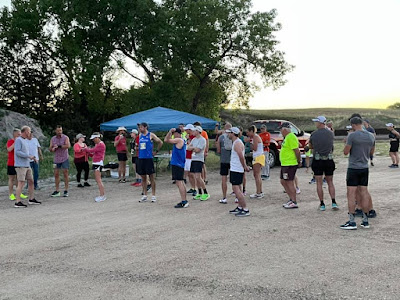 At 6:00am, just before sunrise, we were off.
And, less than a mile into the run, I was by myself, the sky just starting to brighten. A fellow runner took this picture and I happened to be in it...pretty sure she was trying to capture the sunrise scene though :-) . 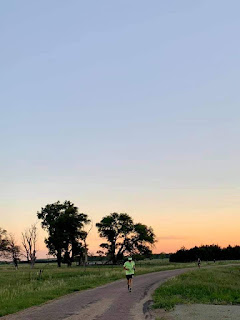 This was the narrow road on which we spent the race.   It was every bit this empty and amazing. 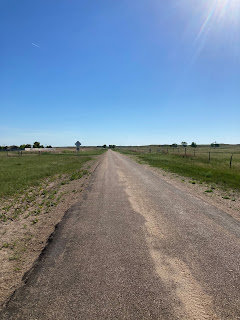 The 6am temperature was around 70F but we knew it would go up sharply as the morning progressed.   I was comfortable through the first nine miles, mostly by myself, though I chatted briefly with the three or four other runners with whom I leap frogged all day.   The course was generally flat, with only a couple of rises, very much unlike the course I had run three years go, which had two massive inclines.
By my mile 11, though, we were past 8am local time and I could feel the temperature rising.   I had started at a 3/1 run/walk, but then dropped it to a 2/1.   I hit the halfway turnaround at 2:23...not great but knowing how hot it was and was going to get, I was OK with it.  I still had gas in the tank.
The field was long since stretched out...this shows what it did look like when runners were still within sight of one another. 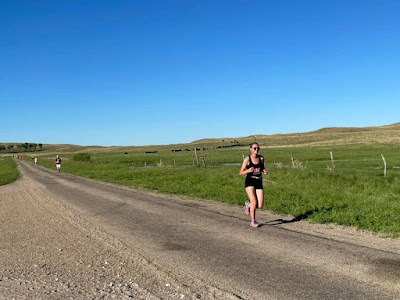 An unfortunate thing happened after the turnaround, which took me a mile or two to fully grasp.   The course angled generally southwest doing out.  We had a small "headwind" running out which was helpful for cooling purposes.   Turning around, though, those small breaths of wind were at our back: the effect was running with very little movement of air.   Coupled with the rising temperatures, it was getting very warm.   Around mile 19, I backed the run/walk to a 1/1...run a minute, walk a minute.
Nevertheless, I continued to bask in the amazing scenery of the Sandhills...empty of people, full of cattle, wide open to all horizons.   Moving through it on foot, slowly, only made the effect more striking. 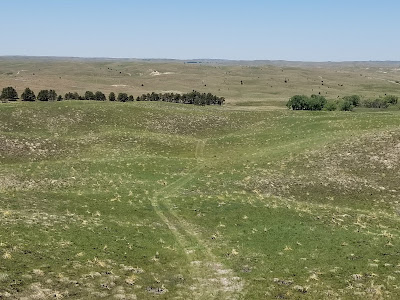 Around mile 18, the cattle looked like they might have a better deal than the runners as they headed for the water at the windmill. 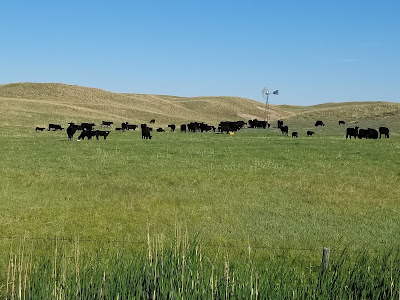 The organizers did a very good job for hydration support for such a small field of runners in this remote location.   At every other mile marker, they dropped a large cooler packed with ice and 8 oz bottles of water and Gatorade.   I carried my 20 oz water bottle and reloaded at each cooler.  Cramming ice in my handheld bottle helped a lot just by simply keeping one hand cool.  I popped a salt tablet each hour.   I was never concerned about dehydration and had no symptoms of it nor any cramping.
It was just hot.
By 10am, it was really getting warm.   Mental math told me I'd be over 5 hours before I finished.   By 10:30 am, 4 hours and 30 minutes into the marathon, I was only to mile 21 and the 1/1 run/walk was just too hard to keep going.   I came to grips with that and chose to keep good health front and center and walk most of the time.   As I felt my heart rate fall, I would pick out a post or a rock and run for maybe 50m before walking again.   And so I did for the remainder of the event.
I was still smiling, despite the heat. 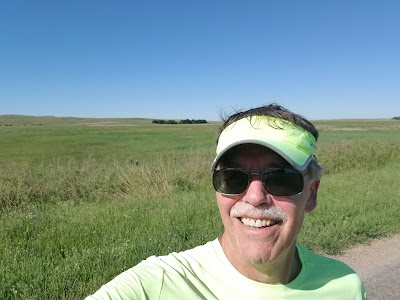 Meanwhile, Gretchen checked us out of the hotel and drove to the start/finish line at a reasonable time. There was about a one-mile straight stretch leading to the finish line and with about a half mile to go, I could see her standing there, peering down the lonely road.   My fluorescent yellow shirt let her see me before I saw her.   And what a great sight to see her there.    We walked the final 150m or so together and then I ran it in.   It was good to be done. 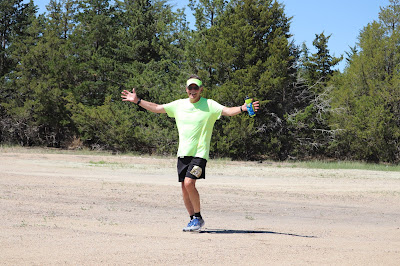 A fellow runner who finished a little after me made a race video...he did a great job capturing the day.    Enjoy it.