Quick Summary:
A marathon is a hard thing.  It's a long way to run.  This race was a reminder of that central fact.  This is a terrifically well-conceived and planned event.  And how often can you ever run 26.2 miles inside??

Let's start with the facts.  The Maple Leaf Indoor Marathon, February 23, 2013, now in its fifth year, is a unique and memorable event.  It is called "Maple Leaf" as that's the name of sports teams at Goshen College, a small private school in Goshen, Indiana.  The Race Director, Doug Yoder, is the head track and CC coach at the college, a marathoner himself and a veteran of the Boston Marathon.  Yeah, he knows his stuff.

And man, did I get questions from my friends!!!!  Enjoy them and the pix.

"Why on earth would you run an indoor marathon?"

Shoot, it seemed obvious to me...it fit my schedule, was only a couple of hours from home and let me run in shorts in Indiana in February.  Do I need a better reason??

I got up at 4am, backed out of my garage at 4:30am and was in the parking lot outside the GC Rec Center by 7am, enjoying hot oatmeal in my car, as is my habit now.  It was so neat to walk inside, be greeted by name, have a racquetball court to set my stuff down on and get set to start.

Thirty of us ran this race and I knew a number of them.  10 of the 30 were fellow Maniacs....probably not surprising. 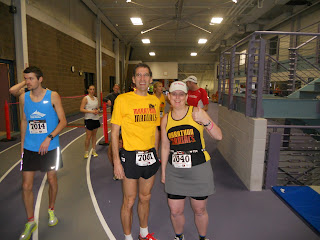 Doug, lower right, pulled the entire field together for the pre-race instructions just before 8am.  When have you ever run a marathon with part of the instruction being "please use the stairs behind you to get to and from the rest rooms...it keeps all the lap counting straight if everyone uses the same staircase"?? 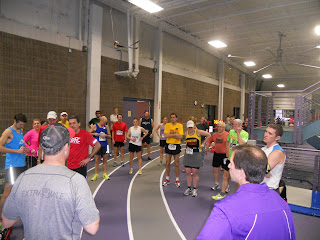 And, promptly at 8am, we got going, 204 trips around the indoor track ahead of us on this fateful day.

Best to just show you some visuals.  Here's the video I shot some 20 laps into the race.


The track was essentially a rectangle with rounded corners.  We had four lanes to pick from. 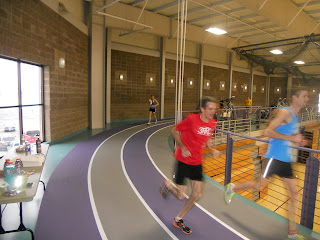 In the photo above, you can see a water table on the left.  We were told to bring our own drinks and we could set them in any or all of the four tables, one in each corner.  So I filled four old Diet Coke bottles with my secret electrolyte elixir,  put one on each table pre-race and that kept me in good shape for the entire race.  When do you ever run a race with 816 water stops??

"Did you ever change direction?"

Mercifully, yes.  Every half hour, an organizer would plunk down an orange cone at the point on the track exactly halfway round from the start finish line.  We'd do the do-si-do around the curve and head back the other way.  It became a fun event, lots of encouragement and high fives as we saw all our new-found friends once again.


This direction change was terrific...I could really sense  the outsides of my legs getting stiff with the four tight turns every lap.  It always felt good to shift directions and 30 minutes per direction was about right.

Not at all.  Lots of folks have wondered if one would go crazy doing 204 laps like this.  Actually, there was a lot going on to keep one's mind engaged.  Personally, using the run/walk method, I always have changes of pace that way.  I was paying attention to hydration.  It was great to talk to people as we went round and round...I had some very nice talks.  The basketball courts below had steady activity to watch...as a long-time soccer fan and referee, I enjoyed watching the Goshen College men's soccer team get an indoor practice in (and Coach did not seem happy with his lads).

"How did you pace yourself?"

This was probably the biggest challenge of the day.  We had neither mile markers (the track was some 7 1/2 to 7 3/4 laps to the mile, depending on the lane...no way I could do that math in my head) nor satellite visibility to use GPS.  We just had 204 laps to run.

The night before the race, it occurred to me one way to assess pace.  I made a modified version of my Universal Pacing Chart based on 10 lap race segments and, remarkably, it ended up working well.

Early, I just ran by feel.  How was I breathing?  What did the legs sense?  That's all I had to go by.  I tried to get a good feel every 10 laps but the laps went by so quickly, especially while in an interesting conversation (such as I had with fellow Maniac "Mad Dog" about the use of Six Sigma variability assessment techniques on predicting marathon finishing times), I often missed the decade laps.

Around lap 170 or so (probably about mile 22), I started to hurt.  The legs were starting to "go" a bit, getting heavy in a way I haven't sensed in any of my marathons over the past couple of years.  I kept plugging away through lap 180 but when my stomach got queasy, I decided to back off the pace and accept what was to be on this day.  I reset my watch from a 5/1 to a 3/1 and, as it so often happens, the legs thanked me and the system re-stabilized.   The pace chart told me I'd probably be right around 4:50...and that was OK. 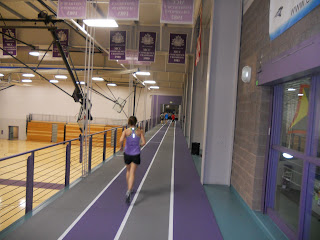 Wonderfully, when I passed lap 194, the organizers started the anticipated "countdown" for me each time past the chip timing station.  When we got to 5 laps remaining, I shut down my beeper and ran it in.  Ego made me hope I'd get under 4:50...but not to be...4:50:09 is was and those extra seconds are good for the humility.  It was the best race conditions allowed.

"What was fun about THAT?"

Well, it's always fun to run.  It was really fun to do such a unique event.  I completely enjoyed the lap layout because, unlike typical road races, we got to see just how fast the fast runners were.  Around my lap 70, I asked Laura Gillette, the eventual women's champion, if I could run one lap with her.  She shrugged her shoulders and welcomed me.  Wow, was that a fun lap...she was fast, finishing in 3:14.  And she chatted, telling me how this was a mere "test" marathon, her first since she had given birth to their second child six months ago.

It was also good for me to run a lap marathon.  As Race Director for the upcoming Circular Logic Marathon, I need to have empathy for lap marathoners.  And, in the CLM, we only ask people to run 26 laps--easy, right??!! 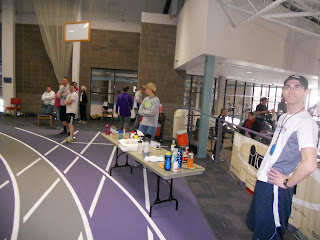 "Joe, are you just plain crazy?"

That's the real question my friends have asked.   I suspect they already have an answer in their heads.

It was a good race.  It was hard at the end.  On reflection, I think the 816 corner turns just took a toll.  And it's good, vital, to remember just what a distance 26.2 really is.

Because, ultimately, it's most important to persevere.