A few years ago, I blogged about how to improve winter running by putting short sheet metal screws in a pair of old running shoes.

I just produced a video with the same information.  I've used this so much, I wanted to make it available for many others.


Feel free to share!   And welcome to our kitchen!!


Summary:   What can you say about the Chicago Marathon?   It's huge, it's amazing,  an estimated 1.7 million people on the streets, a vibe, an energy that's unique and likely only rivaled by the New York City Marathon.   In my third shot at Chicago, I had hoped to qualify for Boston Marathon but, again, came up shot, despite a perfect weather day.   Yet, race day fell on my 63rd birthday and it was a treat to run the best race I could on an October 9.

My local running pal Jon and I were at it again and it was fun to do this together.  We drove to Chicago on Saturday afternoon and got through the Expo with minimal hassle, even with the traffic challenges.   We posed for the obligatory "Hey, I got my bib!" photo. 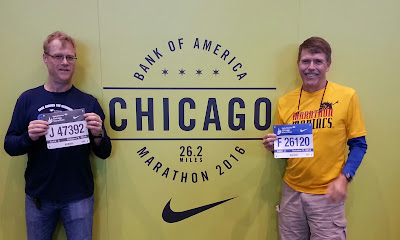 We spent the night in the 'burbs with fellow Marathon Maniac Jerry, whom I had met several years ago when we ran much of the Fox Valley Marathon together.  Jerry and his wife were quite gracious and it was terrific to be in a home, not a hotel.  Even better to share with Jerry the Cubs beating San Francisco to take a 2-0 lead in the NL Division Series.   I fell asleep hearing the final out...sweet.

We were up at 4am and backing out of the driveway at 5, heading downtown on empty Chicago expressways.  Jon did a terrific job to reserve a marvelously well-located parking spot on State Street, in which we parked by 5:30am.   We didn't want to be rushed and we weren't.

We got our layers on in the cool morning and walked towards the start area in Grant Park around 6:15am.   Jerry had advised us to be there early, due to security checks on all runners.  We beat the rush, moved through security and got near the starting grids with plenty of time.   In fact, we had so much time there were no lines yet at the portapots!!

As the sun began to light the eastern sky over Lake Michigan, Jon and I posed for a pic in front of famous Buckingham Fountain. 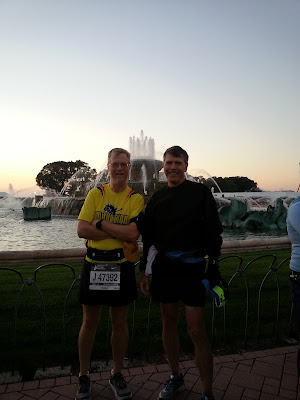 We struck up a long conversation with a young man who was volunteering and wondered just why he was up so early.   We tried to help him see the value in it.  Maybe it helped, dunno.

Jon and I then split up to get to our respective start corrals.  On the way, who should I see but the ubiquitous Dave Mari!  I had last seen Dave at mile 10 in the San Diego Rock and Roll Marathon in June.  He remembered that...how, I don't know, he has a gazillion friends.   We had a fun talk and, of course, the mandatory selfie. 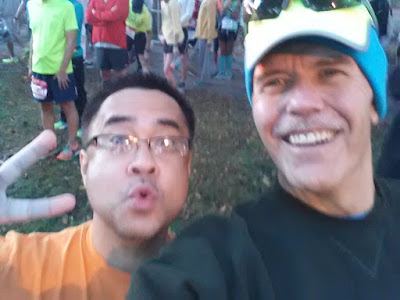 With about 45 minutes until our corral started Wave 2 at 8:00am, I got in the corral, stretched and began to get ready mentally.   I took one final photo of the grid at about 15% filled, put the phone away and began to rehearse the plan for the day. 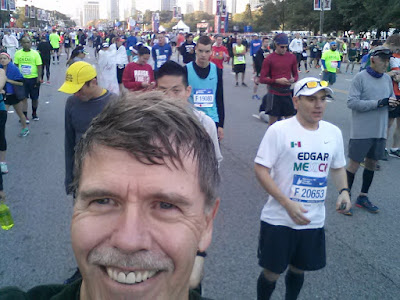 The plan was simple at its core: run 8:55 miles, not too fast so as to use up reserves and not too slow to set me behind the hope of a 3:53 finishing time, a 2 minute cushion under my BQ requirement of 3:55.   How would this work in the crush of people running?  Would my GPS unit work in the concrete canyons of the Loop?  Could my form hold up?  We were about to find out.

As 8:00am approached, the organizers had us queued well for the start of Wave 2, given the "fasties" in Wave 1 were already on the course following their 7:30am start.  I was midway back in the front corral and at 8:02, I began the journey.  It was very difficult to guage pace early on.  Indeed, the GPS lost track of the satellites between the buildings, so I ran by feel.  I passed the Mile 1 post at 9:00 even, a little behind.  It was a crush of people but not as much bobbing and weaving as I had feared.

Along the second mile, I fell in behind a lady who seemed to be running a perfect pace for me.  We hit mile 2 at 8:53, then mile 3 at 8:43.   Sweet.  I paid her a brief compliment and learned she had the same BQ time as me and was also attempting to qualify.  Then she added she had qualified for Boston three times and "knew how to get this done".  Good, I'll shut up and just stay with you.   So, we did through mile 9.   The miles clicked by perfectly, at an average of 8:52.  I was pleased.

We wound through Chinatown and out towards White Sox Park...that gave this Cubs fan a smile.  But the miles weren't smiling as I was right at 10:00/mile for the rest of the way.   Across the Dan Ryan, through IIT and then, finally, the left turn onto Michigan Avenue for the last 5K.

I did my best to run well down Michigan but the turnover wasn't there.  It was here I accepted there would be no BQ today.  When the 4:00 pace group passed me, I knew it was over.  So I resolved to simply run as well as I could, on a beautiful day in a terrific setting with a world around me.  I made the final right turn up the only significant hill on the course, then the quick left to the finish line.  4:03:29, done.

And I was done.   Very done.  I hurt more at the conclusion of this marathon than I  have at the end of a marathon in a long time.  I guess I "left it on the course", which took me a couple of days to really grasp.   I leaned on the barricades and slowly, very slowly, made my way through the finishing area.   I put a good face on for a finish line photo on my phone...you can see what a magnificent day it was. 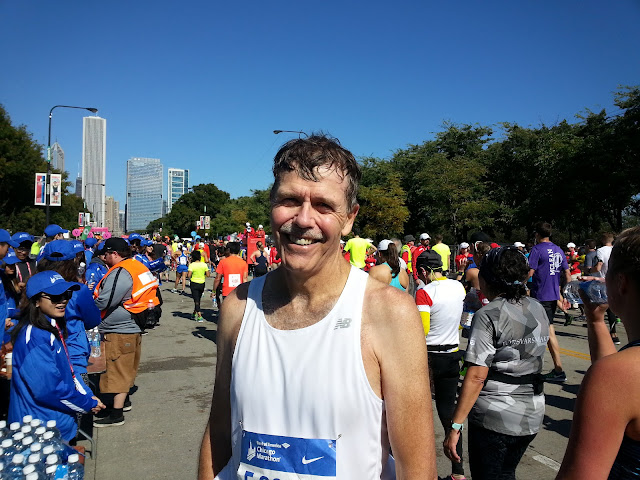 I found the chocolate milk stand (masquerading as Gatorade Recovery drink) and downing two of them made a world of difference, along with a banana and an apple.  I was moving better at last and worked my way towards the exit of the runner area.

And saw this mass of humanity, crushing up against the barriers.  It was a little scary, actually.  I'm not quite sure how anyone really found a loved one in this mess.  I just had to take care of myself. 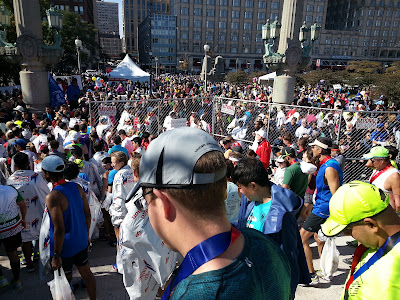 As I mentioned earlier, Jon found a terrific parking spot, so it was a short walk to his car, where I got some dry clothes and some further fluids.   I then headed back to Michigan Avenue, using the phone app to track Jon's location.  I found him around 16th Street and we ran a good half mile or so as he finished up.  I broke off before the security entrance for runners only and we met up at the car shortly.   On the road, soon we got home by 6pm, in time for a birthday gathering at our house.  It was quite a 63rd birthday, indeed.

Since race day, much post-race reflection.   How did I actually feel about a 4:03 marathon?   I remain mixed.   My goal-oriented side is still disappointed.   My pragmatic side noted I had given it my best.   I wondered if I should have modified my training or racing plan.   Overthinking knows no bounds, after all.

Jon is a kind listener to my navel-gazing mental meanderings.  I sent him some race data from four decent marathons over the past year and, rather than just talk, he complied the mile by mile times in four sub 4:05 marathons into one coherent graph.   He's a data guru, professionally, and it shows.

The key here:  Blue is Monumental Marathon, 7 Nov 15;  green is Carmel Marathon, 16 Apr 16; yellow is Wisconsin Marathon, 7 May 16 and orange is this Chicago Marathon.

So, I ponder that.

Yet, as I get a bit of distance from the event, I feel better about the race.  Placing in the top quarter of my AG and top third of the entire field was very encouraging to me.

Where to I go with my effort to qualify for Boston?  I'm not sure.   If I wait two years from now, I will only need at 4:10 to qualify.   Can I maintain that speed till then?   Oh, so much to think about.

And, maybe I just smile and enjoy running for its intrinsic pleasures.   More and more, I'm landing there.