Where did July go?

The month of July has dissipated and I'm in a bit of a tizz over it's departure. We were in Bermuda for the first week of the month. Upon our return, I plunged into the annual process of umpiring numerous Little League Baseball tournaments. The effect was that I've been umpiring for 12 of the 15 evenings since we returned. To say the least, this leaves blogging long in the dust, along with most everything else besides work and communicating the barest of essentials with my wife and family.

It all tied up on Friday evening, when I was at first base for the Indiana state final game. The game went well, a crisp, 3-1 affair in which the umpires were invisible and the winner was clearly the best team. Here's our umpiring crew; I'm the third from the left. 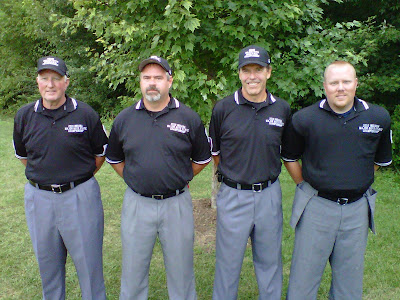 The late nights have clearly affected the preparation for the fall marathons. I don't think it is insurmountable, however. I've simply lost some miles and at least one 15+ mile training run that got cut short. Replanning the schedule, I did mile repeats today which went well. Next Saturday will see a 22 mile effort.

I've added one more race as well. On the Saturday before Labor Day, I'll be running a 30K race in Michigan as a shake down for the Chicago Marathon set for October 10. I'm also looking at another marathon in December; the date will depend on some work events. It is possible, however, I'll run Rocket City again.

Nice to have some sanity back. The regularity of running and the discipline of training is central for my own perseverance.

We got home around midnight Saturday from a terrific week in Bermuda. Relaxing, great conversation, saw some wonderful things while we were there. Bermuda is quite a unique place, a fascinating combination of British, American, Caribbean and a touch of African cultures that defies description. The people were contagiously friendly and polite...we were quite taken by the place.

If you'd like to see some of our photos, here's what I uploaded.

Run? Yeah, I got to run. The roads are very narrow, tight and twisty, so I was pleased to find the Bermuda Railway Trail available not far from where we stayed. I did all my running there and shot a video one day...enjoy.

It was a great way to celebrate our 35th Wedding Anniversary. While we were there, we decided another 35 would be a fine idea. 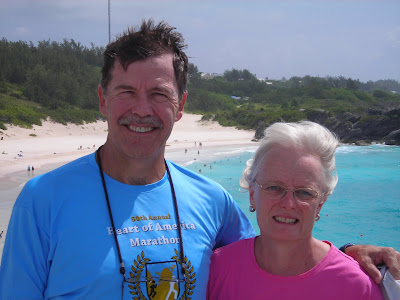 Persevere. It makes for both good running and a good marriage.

ORN:  18.5 miles, 3:24:46, 11:05/mile, R3/W1
Now, all is in order...the training cycle for the Chicago Marathon is in synch.  Due to hitting some company targets last winter, we shut the place down today, Friday, making a four-day weekend for all.  Talk about a morale booster...that one really worked.
So, I went running on a Friday, not a Saturday.  The run went well...temps in the mid 50s at the start, the low 70s at the end.  Felt really good through 16, the last 2.5 were a bit of a struggle.  I attribute that do doing 16 miles last Saturday as well.
And tomorrow, Saturday, my lovely wife and I head for a week in Bermuda to celebrate our recently observed 35th wedding anniversary!!  Never been there before, sure looking forward to it.  We rented a small cottage for the week and, thanks to Google Maps, I found a super place to run while I'm there...about a half mile from our place is a 4+ mile path right along the ocean.  A far cry from Indiana running, for sure.
Perseverance works for a good long marriage.  I have much for which to be thankful.
.
Posted by Joe at 9:04 PM 3 comments: