Tourists in Washington, DC--Photos from our trip in August, 2018

Off topic from running here, but wanted a place to stash some photos and one video...enjoy!

On the first week of August, we took a long-planned trip to Washington, DC.   We hadn't been there in a long time and just decided to be tourists and see touristy things.   It worked well and proved far more thought provoking than we had imagined.

Long-time friends, Stan and Ann Marie, had invited us to stay with them, using their Virginia home as a base for our forays.   It was a lovely gesture and it was terrific to spend a lot of time with them.   We drove to DC on Saturday, August 3 and got going on Sunday.

Sunday morning,we went to church with our hosts and got to hear Stan preach, which was a nice blast from the past.   Sunday afternoon,we visited the Udvar-Hazy Air and Space Museum near Dulles Airport.   Part of the Smithsonian Museum system, it is a HUGE aircraft hangar with many planes, very cleverly displayed.

Just after entering, we saw the Enola Gay, the B29 which dropped the first atomic bomb on Hiroshima.   Arguably, the most profound airplane ever. 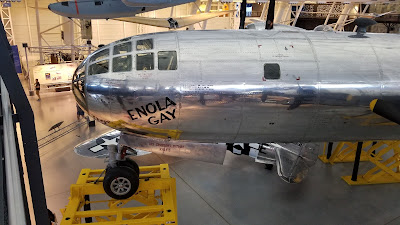 Did I mention it was big??   Yep, here is the last Concorde to ever fly...the full airplane. 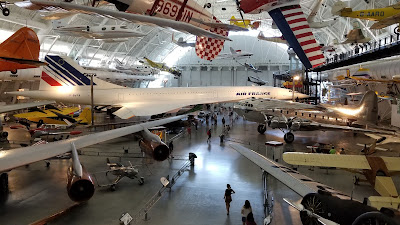 And tucked under the wings of these large planes, were many other aircraft, including supposedly the smallest airplane to ever fly. 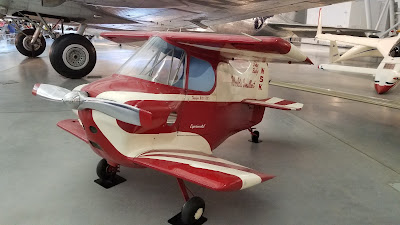 They had a large wing just for spacecraft, dominated by the Space Shuttle Discovery.   I had no idea just how large it really was...standing next to it was awesome. 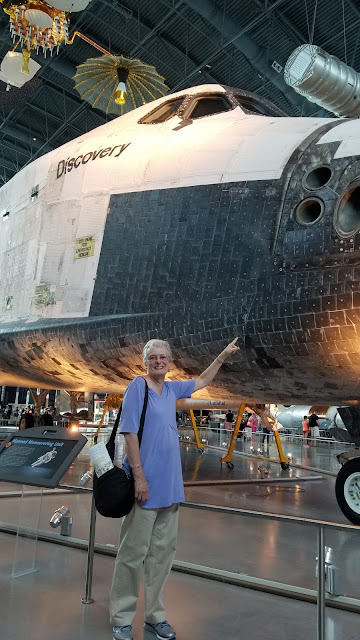 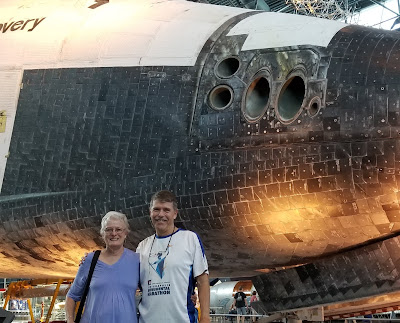 One pleasant surprise was this Beechcraft twin from the late 30s, likely a plane produced while my Dad worked in the Beechcraft plant in Wichita before WW II broke out. 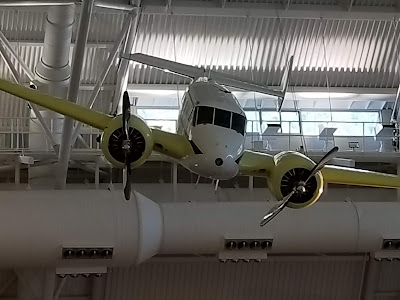 It was a first-class museum, with catwalks arranged to get you up close with many, many important aircraft.

Sunday evening, Stan and Ann Marie set up a chance to have dinner with Debbie and Phil, folks with whom we worked in 1976-78 in Swaziland.   Terrific to catch up with them. 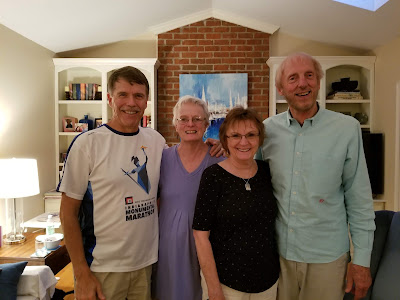 On Monday, Gretchen and I headed to the heart of Washington, the National Mall.   Taking the Metro to avoid traffic and parking hassles was a smart move...and, walking up out of the Smithsonian subway station, we saw the Washington Monument in one direction, the US Capitol Building in the other.  We were right where we wanted to be. 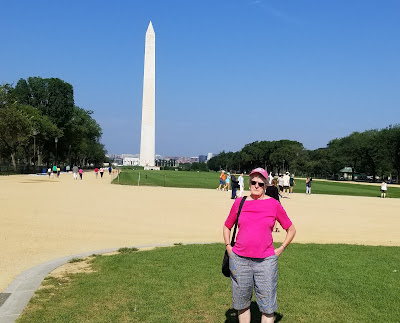 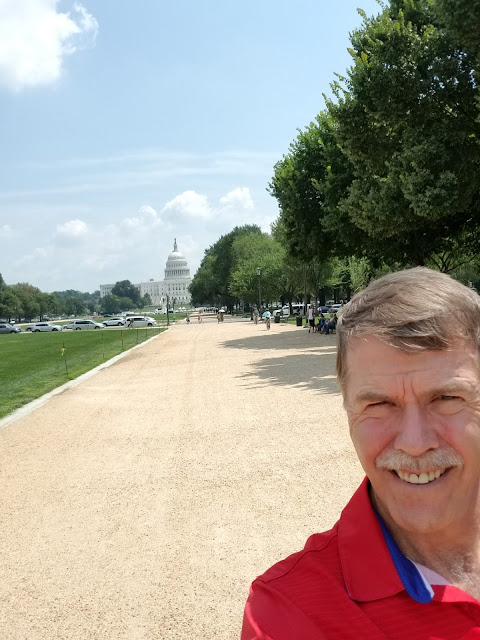 We spent almost all day exploring the various Smithsonian museums along the mall.   From great art to the Hope Diamond, we enjoyed it all and were on our feet a lot.   It was super hot outdoors, so it was nice to be inside in AC most of the day.

We decided to miss the rush hour on the Metro and found a spot to eat dinner, which turned out to be next to a US Navy Memorial, which we were surprised to find, north of the Mall. 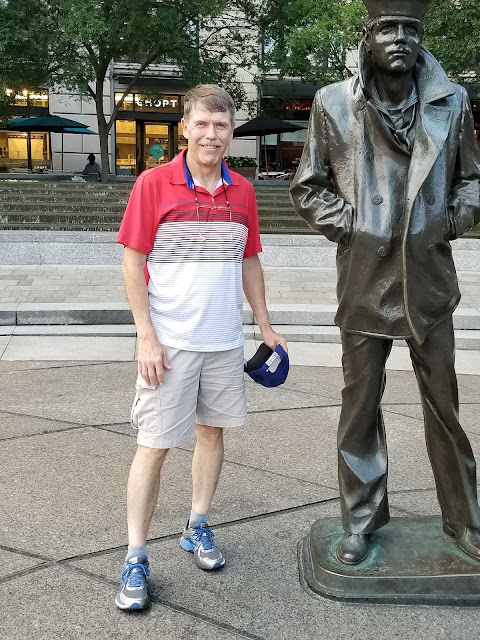 Amongst the many plaques commemorating aspects of Navy life was one noting the first time an airplane launched from a ship. 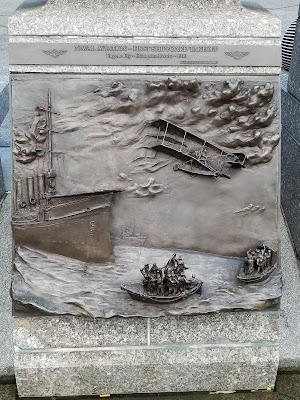 I smiled as I looked closely, pretty sure what I would find. 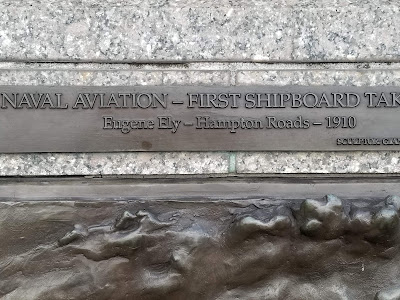 The pilot of that first shipboard launch was Eugene Ely...which was my own father's name!   Of course, this event took place a full five years before my Dad was born but our family has always enjoyed this historical detail.   It was nice to see his name, if not him, in this famous place.

We spent all day Tuesday, August 7, at Mount Vernon, the home of George Washington. 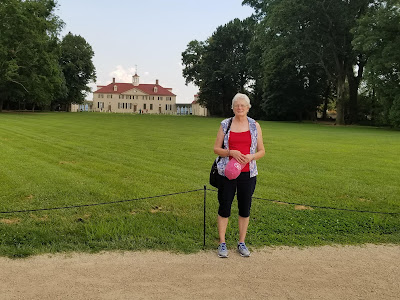 While both of us had visited Mount Vernon as teenagers in the late sixties, neither of us had any memory of it at all.  There was much to learn about our first president; he seemed a remarkably innovative man, agriculturally, governmentally and militarily.

The staff at Mount Vernon also faced squarely the problematic fact of Washington as a slave owner.   We went on an hour-long docent tour of the grounds discussing the matter.   Much more to this than I can capture here, but one item captured much.

Washington's 8,000+ acre estate ultimately had just over 300 enslaved persons.  They lived, worked and died on this estate.   And where were they buried?     Perhaps 60 meters or so from Washington's own tomb is a wooded area which turns out to be the final resting place for many of those who worked the land, living there as property, not as persons.  No records remained of these burials, no markers on any grave and even the discovery of the cemetery area took time.

Relatively recently, Mt Vernon has build a monument and seating area in the slave burial area.   We spent a good 45 minutes in and around this area, speaking at length with two docents familiar with the matter. 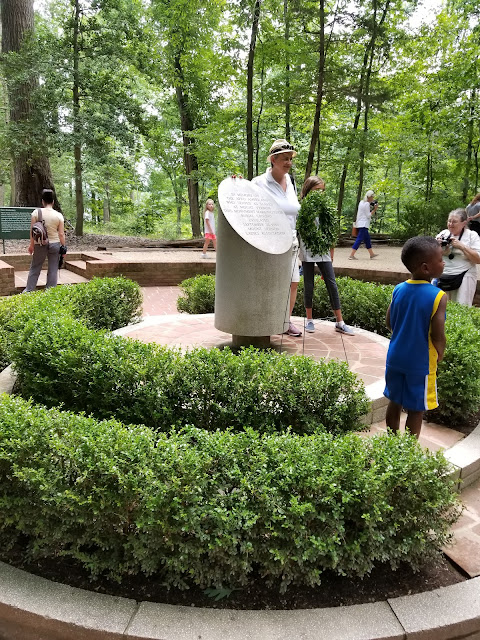 Archaeologists are also using X-Ray technology to methodically explore the ground under this area and, without disturbing any human remains, have definitively located 75 individuals' resting places.   They estimate they will find many more.  While unable to individually identify the remains, the mere location of the bodies restore a touch of the humanity which each had lost. 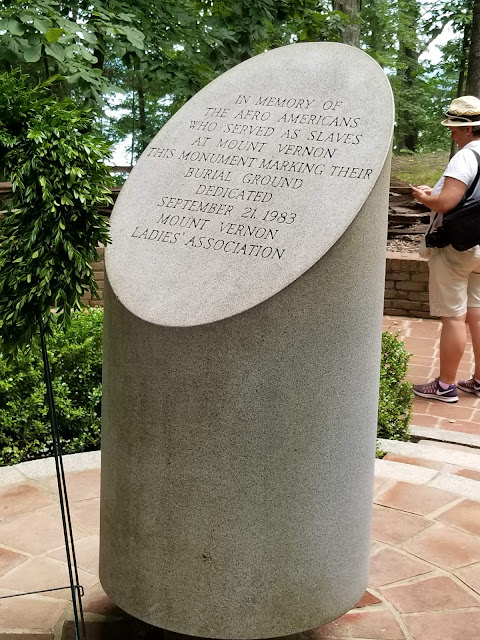 Indeed, twice each day now, the staff conduct a brief ceremony to honor these enslaved individuals, telling the story of the burial place.   Gretchen and I both participated in the ceremony, as the docent asked for volunteers to read a paragraph about the life and role of one of them.   It was a moving moment.

We took Stan and Ann Marie out to dinner afterwards and had much substantive conversation on our day.   And fish tacos always work for me.

On Wednesday, we headed back to the heart of Washington.   We hopped off the Metro at the wonderfully-named Foggy Bottom-GWU stop.   The day's objective was to visit a number of Washington's famous memorials.   First off was the Vietnam Memorial.  I'd been here several times but G had never seen it.   It's so amazingly designed and pulls you in. 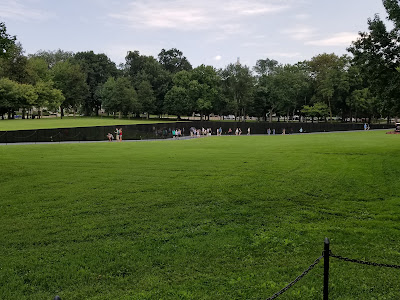 The polished granite simply lists the names of those who died there.   The sheer magnitude of our loss is almost overwhelming. 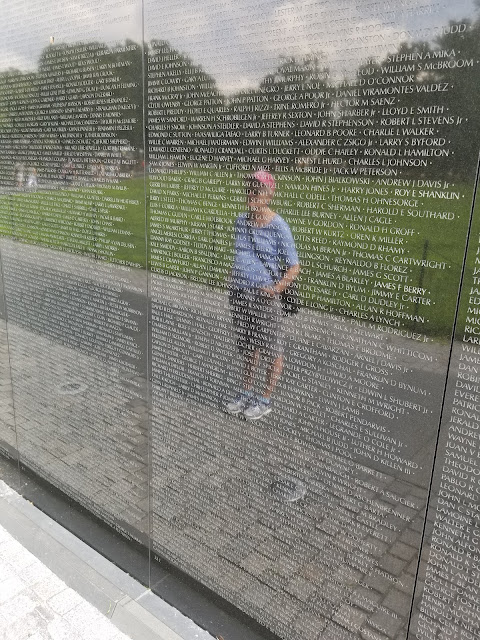 G and I are fortunate to not directly know anyone who died in Vietnam.   Yet, looking up the alphabetical listing of names, I did find one with our surname.  While not related to me and I have no other knowledge of this Ely, it is still sobering to see my name there and realize he, just like every other person named on the wall, left a family behind and many unfulfilled dreams. 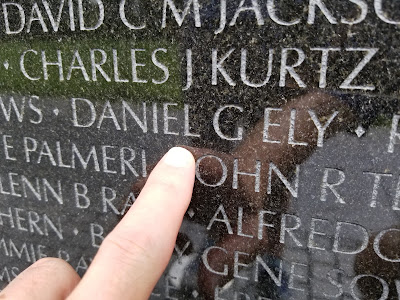 We had a spontaneous discussion with a Canadian couple while standing along the memorial.   We appreciated their empathy. 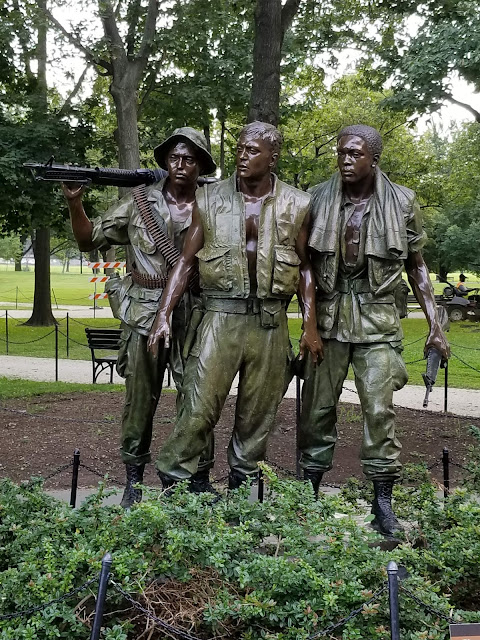 From the Vietnam Memorial, we walked to the Lincoln Memorial.   Massive and impressive.   What more can I say? 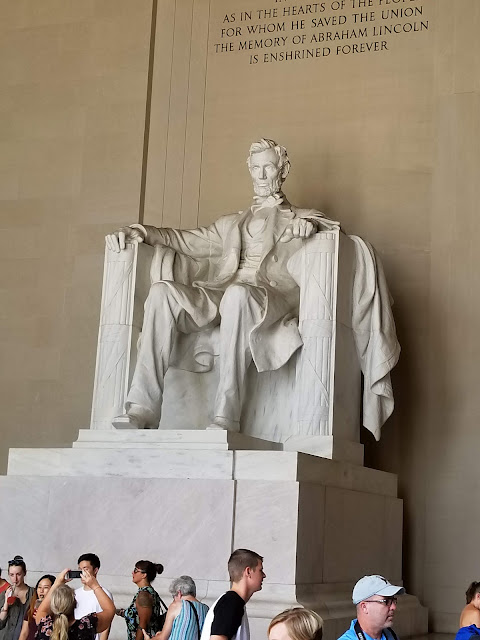 I've been to the Lincoln Memorial several times but had never noted inscribed on the wall  to Lincoln's left is his second inaugural address, made while the Civil War still raged.   It would be good reading for all of us in this divisive political moment.

We then turned and proceeded to walk the length of the Mall, all the way to the Capitol building, in the distance here, on a very hot day. 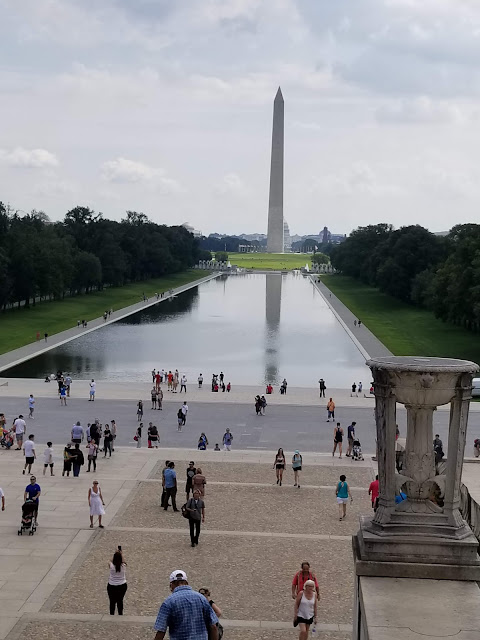 We stopped first at the Korean War Memorial which neither of us had seen.   It had it's own appeal, yet is a war about which many of us know little.

Farther along, is the relatively new World War II memorial, almost at the base of the Washington Memorial. 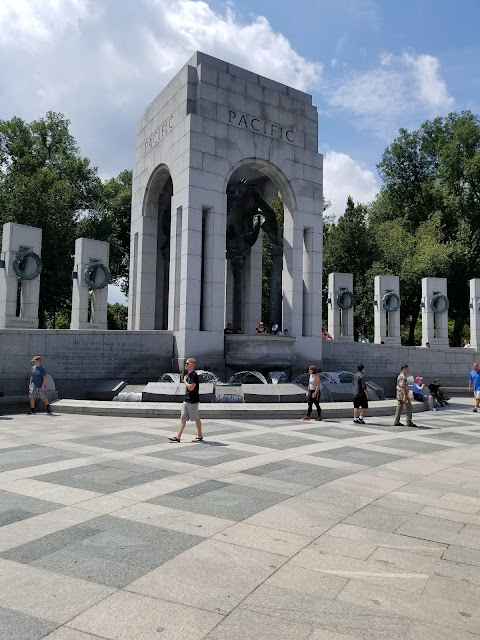 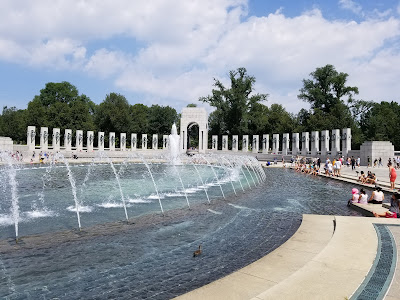 This quote about the most famous of battles in the Pacific reminded me of another museum we enjoy and is special to our family. 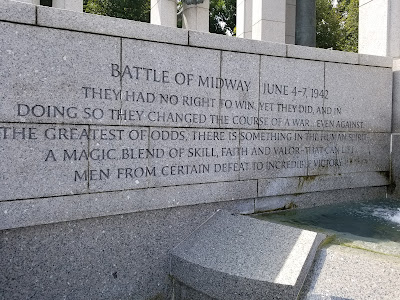 By this point, it was very, very hot, so we were relieved to find this hidden lunch boutique near the Washington Monument and cooled off for a while in the midst of the welcoming, intimate and special setting.

We walked on and visited the National Botanic Gardens.   It looked wonderful, yet we were just so hot (it was 3pm by then) we couldn't absorb it at the level we'd have liked.   Perhaps another time, in cooler weather.   There was much there.

We then caught the Metro to the National Portrait Gallery, at the strong suggestion of our son Matt and our friend from dinner on Sunday, Debbie.  As the name suggests, it presents American history through the eyes of portrait artists.  We could have spent more time but chose to go through the history of the American presidency, with portraits from Washington to Obama.

I found this early photograph of Lincoln very compelling. 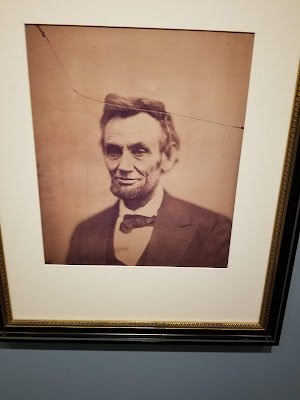 And other portraits were funny.   Here's the long view...to the left is a tiny portrait of Richard Nixon.   In the center is a Huge portrait of Jimmy Carter.   Someone chose them. 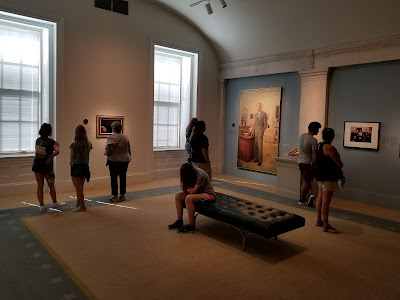 We bid Stan and Ann Marie well on Thursday morning and headed home by way of the Antietam National Battlefield, the crucial Civil War battle about 60 miles west of Washington, DC in rural Maryland.   Being away from any commercial development, the authorities have been able to purchase the multiple square miles over which the battle took place and reconstructed the farm buildings, tree lines and crops which were present for the battle in 1862. 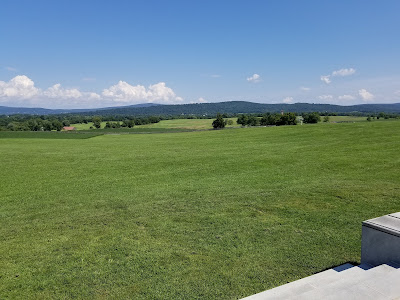 We heard two presentations at the Visitor's Center which oriented us, then went on a driving tour of the entire battlefield, seeing many markers like this along the way. 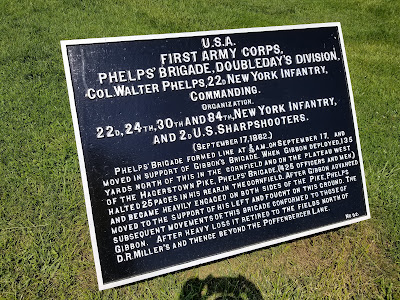 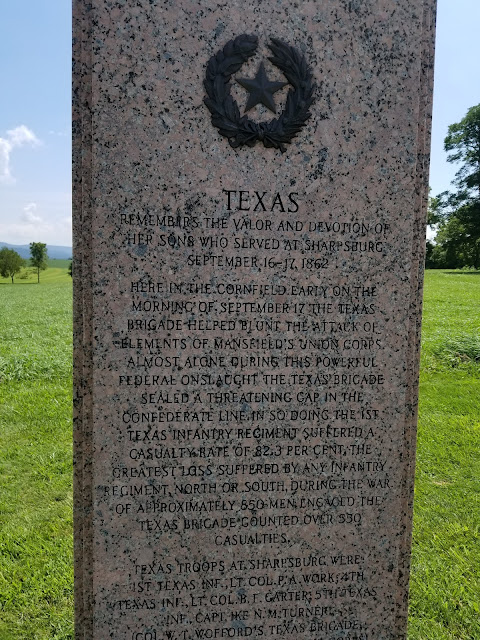 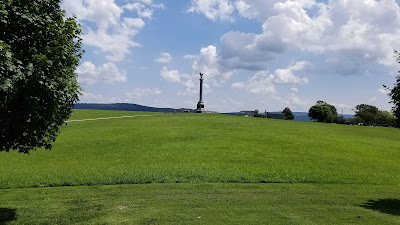 And I summarized my observations in the moment on this video from the high ground held by Gen. Robert E. Lee during the entire battle.

So that was our trip.   I so enjoyed sharing this with Gretchen...we could do a lot more trips like this, I'm thinking.

Thanks for reading along.   Perhaps someday we'll come to your city.