2018 was an odd year, running wise.   I came off late 2017 having finally qualified for the Boston Marathon yet took my first ever DNF in the year's final event, the HUFF 50K.    Where would the year go?

I resolved to just run some events I enjoyed, plus some ultras.   With Boston in the bag, I could just enjoy myself, right??

Didn't quite work that way. 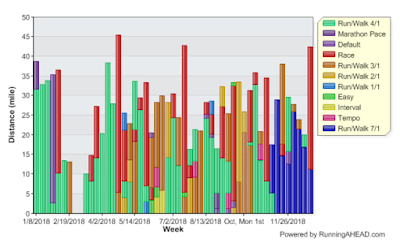 My weekly mileage chart for the year was consistently inconsistent.   This isn't very good at all. 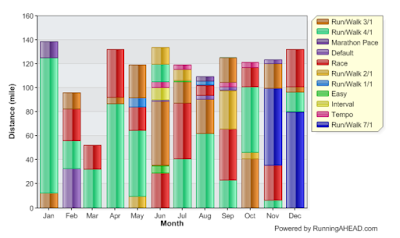 In January, I got my toenails worked on.   That got in the way more than I had dreamed.    While on a planned 17 mile run while on a February vacation in Gulf Shores, Alabama, my left foot got so painful, I had to walk the final 3 miles.

Yep, the dreaded PF, which I'd heard about in so many others, arrived in my very own left foot.    I took a full five weeks off from running.   Man, was that disorienting...haven't been off that long since I started this era of running in 2004.  By late March, I gingerly started running again.   I took a shot at running at an old favorite race of mine, running half of the Sam Costa Half Marathon.    It was OK.   A couple weeks later, I ran a real HM at the Carmel Marathon weekend and it was ok, not great, but ok.

Looking at the miles by month, it isn't really different, just lumped together a bit more

Then, the test (or perhaps the stupidity) was the Glacial Esker 40 mile race in late April.   A trail ultra.  The second longest single run I've ever done.   I was pleased to have done it, indeed.  But it took a deeper toll in recovery than I anticipated.   I did come back in time, though, to enjoy one of the finest marathon experiences I've ever had at the Sandhills Marathon in early June.

I messed up training in summer...the Run Less, Run Faster didn't work at all. That was really a bad move.   At least I got it corrected.   But the low mileage really got in the way of having any good marathons during the fall.  In particular, my performance at the Monumental in early November was disappointing.

So, looking back to the start of this era of running in 2004, the annual totals are not so hot for the last three years. 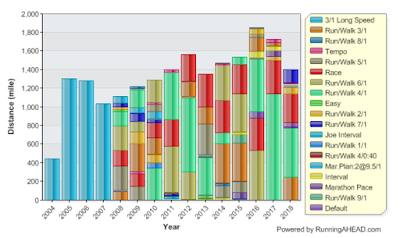 Another major issue for the year was the sad but necessary end of the Circular Logic Marathon.   In 2012, wanting to give back to the sport I enjoy,  I started this early spring marathon on a one-mile loop in a local city park.  Amazingly, it grew and attracted a small but enthusiastic following.   The 2018 race went wonderfully.   But changes in the local park leadership, the construction of a new municipal swimming pool and the fatigue of the three of us who really led the effort made us decide to end the race on a high note.   It was a good, seven year "run" (pun totally intended) for this event.   I was glad to give back to running.   Yet, I'll miss it.


Quick Summary:    Just a very enjoyable day in the Indiana woods on runnable trails on a very mild, December day.   Enjoyed this race to the hilt.

The HUFF 50K is a year-end mainstay of the midwest trail running circuit.  It's been around for over 30 years, the last 8 in it's current location at Chain O Lakes State Park near Albion, Indiana, not far from Fort Wayne.   I've run it many times.


I first participated on December 16, 2004, running a single 10 mile loop just seven months after the start of this era of running.  Until that day, I had never run trails at all.  I'd never run farther than 8 miles before that day.   So, it's funny to read now my race report of that day.  Dan Quayle, where are you now??  But, it was a big deal at the time.

I've written about all prior HUFFs since the organizers had to move the race to its current location at Chain O' Lakes State Park.  Weather conditions in late December in Indiana give each year its own character .

2011:  The Deep Water Year. ( 7:33:44) The most philosophical I've ever been on my blog.  The lessons of that wet, cold, muddy day still hold, remarkably.  link  The 2011 race and the "aura" surrounding it has grown over the years.   When I meet anyone who also ran that day there is an instant bond.

2017:  The coldest and harshest weather of the race series.   My head was not in it either, so I dropped out after one lap.   link

Having done poorly last year in bitterly cold temperatures, I wanted to complete the full 50K this year. I drove to nearby Columbia City, Indiana the day before the race and hunkered down at Super 8, eating in my room and trying to then sleep.

With the sun still not fully risen, we got started sorta on time, which is a de facto tradition at this race.  The weather was between 29 and 31F all day long with cloudy skies and negligible wind.   Importantly to this trail race, there was no snow on the ground, had been little rain,   A very wonderful, runnable trail race day.

Lap One was fun.  The pack was intact and the footing was wonderful, neither too hard nor too soft.   I chose to particularly work on my downhill running technique, knowing I'll need that full well at Boston in April.    It was just enjoyable.    The only fly in the ointment was a persistent "rock in the sock".   Somehow, three times, I managed to flip a pebble which got not inside my shoe but inside my sock.   Had to stop, take off my shoe AND sock, clean it out, reload, all in the woods.

I finished lap one at 3:14 and headed back out to do the course again.

Lap Two at HUFF is always different from Lap One...the relay runners are largely done, the one lap folks are done, the full 50K field is spread out.   This year was the same.

And I enjoyed it immensely. I simply ran and got into my own world, alone in the woods.   I had a good friend from work who I knew was having a tough day as I ran and many thoughts went his way. Around Mile 23, I was tiring but I knew a secret weapon awaited at the Rally Camp aid station.   They are famous for having fresh hamburgers and I remembered their miraculous powers.   I ran into the station, looked for the warming table, where a lady assisted by slathering ketchup all over a half-burger.   Yum...down it went, washed down with a cup of CocaCola.   Man, was that good.   I suddenly felt wonderful...the proteins, sugars and caffiene combined to pick me up for the final seven miles.

The view in the woods looked like this almost all day.

Week Three of Hansons training, heading to Boston.  And I took the biggest liberty I'll take with Hanson's plan.

Here was the plan for the week:


The weather was amazingly mild this week...I ran on Christmas Day and on December 27 in shorts.  Amazing.   4 miles on each day, at paces better than called for.   I'm wondering if I'm doing them too quickly.   By the same token, I'm not yet fully into the full teeth of the program, where I'll really need to back off and give the legs a break.

The day after the 50K, I ran with my grandson for 3 miles at a 12 minute pace.  Legs were a little stiff but zero pain.

So, week 3 is in the books.   And no races, only training now until late March.

So we move now into Week Two.   Not much different from Week One, really, except five running days, not four.    The plan from the Hanson's looked like this:

I only made one switch from the plan, running Wednesday and taking Thursday off, since I had a 7am meeting at work on Thursday.

I was pleased.  And I full well know this is the easy part of the training program.   Our weather has been unusually mild as well...I ran in shorts on Friday, for example.

A challenge for me, as we approach Christmas, is ignoring the Onslaught Of Carbs.   Cookies, cakes, nuts and snacks are everywhere.   Candy doesn't do too much to me but breads, cheeses, crackers...yeow, those do me in.

Week Three holds a 50K trail race...defintely NOT in the Hanson's plan.   But I'm going to do it, keeping up a streak at this race which I truly enjoy.

So, I finally got going on Actually Training For The Boston Marathon.

In a real way, this feels very much like crossing the starting line of a marathon.   I'm excited, glad it is going and knowing fully the start line is mostly just an administrative necessity.   You can't finish unless you start but by itself, it means little.

Here's was the plan  for Week One.   Looks pretty simple.  Four days of running.


I took advantage of this.   My right ITB has felt sore...the rest did it OK.  My actual runs and paces were:

The Week One mileage was just so low.   But the big difference was on Saturday.   I have a long-scheduled 50K race coming up in two weeks so I felt I had to get in a modest long run.   My ITB is still tight...next week I do the low mileage as taper into the HUFF.

Easy to do Week One.  Mile One is easy in any marathon.   Keep the powder dry, keep moving.

The Boston Marathon is a race like no other.   So, I'm going to begin a weekly series of posts about my training for the race.   You might enjoy the journey; mostly I'd like to keep a diary of the effort.   Read along with me.

The effort will be unique, in that I'm going to implement a full, formal, 18 week training plan.   I've chosen to use The Hanson's Marathon Method.   This is a widely respected plan which is very carefully planned to build to a good performance.    The unique part of the plan, which appeals to me, is a targeted pace for each run.   The pace is calculated from the top end by the targeted marathon time (for me, four hours) and the bottom end by a typical mile pace for 5K (for me, 7:50/mile).

The training period begins on Monday, December 10.   And there are a lot of long runs, hard runs, interval runs, easy runs through the Indiana winter...how will it go??   I'll keep track of it here.   I'll try to publish each Sunday evening, as that's the end of the training week.

I'll share each week's plan and the actual results every Sunday evening, as well as my thoughts and reactions to the plan.   It'll be up and down, I can anticipate.   And I'm looking forward to the journey.

Persevere.   That's my theme this winter.