The Maple Leaf Indoor Marathon is a treat.  Got in a long run in a perfect climate with no wind, no hills, comfortable temps and friendly people.   The fact it was 204 times around an indoor track was, frankly, irrelevant.  Lifetime marathon/ultra #72 in the books.


Not Many Gory Details:

This is a short write up, mostly to capture a few thoughts and a few photos.  I first ran this race in 2013 (report here) and the logistics were identical this year.    Running buddy Jon had also registered but persistent illness prevented him from running.   So, it was a 2.5 hour drive in the dark Indiana countryside by myself and, after a hectic week at work, the time alone was welcome

One photo tells much of the entire story...here is the entire marathon and half marathon field.   Yep, this is ALL of us at one corner of the indoor, mezzanine level track on the campus of Goshen College in Goshen, Indiana.

Race Director Doug Yoder is in the yellow hoodie on the left.   Doug and the timing guy handled the entire race...two people.   And it went well.   Contrast this to monster events like the Chicago Marathon, where it takes a helicopter to get high enough for a photo of the entire field and thousands of volunteers to make the race happen.   Fun to run both types of events.   And a lot of me really likes the smaller better.

The most remarkable thing about this race was that it was entirely unremarkable.   We got started and just ran.   Many have asked or shook their heads about running an indoor marathon.  What I've observed (this is my fifth indoor marathon) is that you don't even think about the number of laps.   Instead, you just run comfortably and run for time.   And that's what I did.

So, in the absence of any great drama or other big race news here are a few interesting tidbits from the day.

The race winner was Jake Gillette, below, with his wife Laura.  I've come to know the Gillettes since my first Maple Leaf race in 2013.   Laura and Jake have both run (and won) the Circular Logic Marathon, for which I'm the RD.  They are both speed merchants.   Jake ran Maple Leaf as a final tune up for the Boston Marathon in April.   Laura didn't run Maple Leaf but did come out and run a few laps with a friend and, in a wonderfully kind touch, wore her green Circular Logic T shirt, knowing she'd see me there.   I appreciated this!  Both of them will run Boston...they will do well. 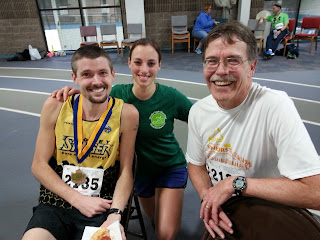 Alongside the track was a huge collection of national flags.   I presume this represents the nationality of students who have attended Goshen College over the years.   And one caught my eye...the distinctive flag of the small southern African country of Swaziland.   Gretchen and I lived in Swaziland from 1976 through 1978 and our oldest son was born there.   Many memories came back from that time, now long years ago. 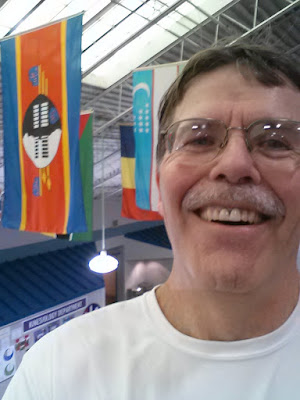 Yes, this race is not like Chicago and, yes, there are nowhere near the spectators there are in Chicago.   In fact, you could count the spectators at Maple Leaf without needing to take off your shoes.   Shoot, how exciting is it to see the same people parade by every 35 seconds or so??  Yet, the few folks who were there had a good sense of humor.   This girl had a relative running the half-marathon option and entertained us with a steady series of signs on her white board...it was great fun as we went round and round. 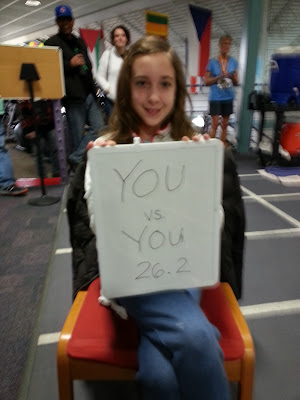 A hot shower right after the race in the college locker rooms capped off an enjoyable morning.   No soreness, no pain, just a good, long run to prepare well for spring racing.