Off topic this post, yet really not for those of you long-time blog readers.

A week ago Sunday, May 8, was one of those days you remember. Our youngest son, Matt, finished his four years at Wheaton College, with quite a flourish.

As a high schooler, Matt decided he wanted to pursue being a part of the US Army. He worked towards and won an ROTC scholarship to Wheaton. He spent four amazing years growing in stature, understanding and leadership. All of that was culminated when he took his oath of office and became a Second Lieutenant. It was a very special moment. 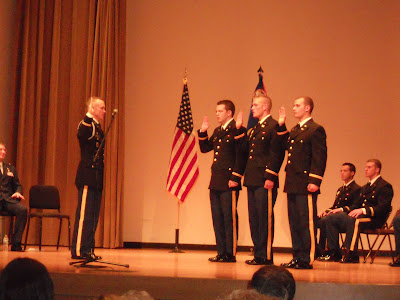 The ceremony also included the traditional "First Salute", the first time an enlisted man or woman salutes the newly-minted officer. Matt asked his brother, our oldest son David, to offer the first salute. David, even though out of the Army for 2+ years now, dug out his dress uniform with full sergeant stripes and offered the salute.

After the commissioning at noon, Matt and his 10 fellow new officers had to hustle across campus to line up for commencement at 3pm. The 600 undergrads filled the stage and the event had all the pomp expected of such an occasion. 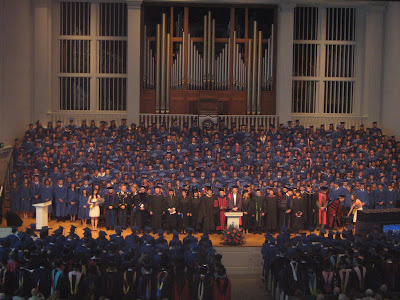 After commencement, we got together; the smiles are genuine. 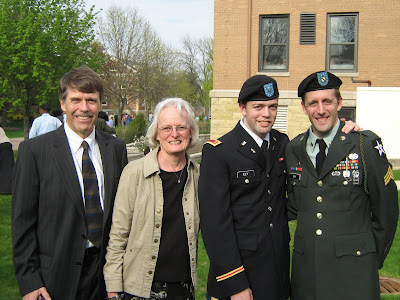 The only tough part of the day was that our third son, Nathan, was unable to get time off from his job in Portland to join us, despite his best efforts. We included him on several phone calls anyway. David's wife Susan was with us on Saturday but she had to drive back home early Sunday morning as the college where she teaches had its own commencement.

If you'd like to see more photos of our weekend, I've posted about 17 pix here.

Be glad with us. It's been an amazing thing and now three sons all through college and moving on to their lives. We love each of them and are grateful for the gifts and skills they each bring to their worlds.

And each of them continue to persevere. As do we.

What a terrific weekend at the Illinois Marathon!! A marvelous chance to run not one but two races with Darrell in mild spring weather. The 5K on Friday night was fun and "spontaneous". Saturday's marathon taught lessons (as usual); this one about preparation and training mileage. It was a great way to finish up a stretch of 6 marathons in 7 months.

The weekend started mid-day on Friday. I had taken the day off and left about that time to Midway Airport in Chicago to pick up Darrell who had arisen at 4am in California to begin his journey east. I'll spare you the details, but suffice it to say we knew it would be tight to get him off the plane at 3pm and make it 140 miles south for a 6:30pm start for the 5K. (We actually planned ahead and wore our running shorts under our jeans.) Despite traffic in both Chicago and Champaign/Urbana, needing a friend to pick up our bibs/packets and one-way streets the wrong way in a strange town, we kept all four wheels of the car on the ground through all turns, ran the 1/3 mile from our car to the start line and had all of 60 seconds to spare before the gun went off.

The 5K was just fun. We ran easily, mindful of the fact we had a marathon the next day, finishing in a very relaxed 29:28. The finish, making a circuit of the U of Illinois' football stadium, was fun, with a big crowd and loud music. A couple of folks noticed I wore a Purdue shirt inside our rival's arena; alas nobody picked up on Darrell's California Cruisers Running Club shirt here in the Midwest. 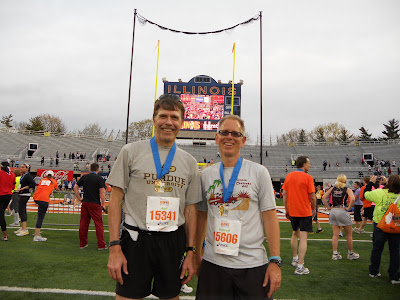 We enjoyed the race pasta feed after the 5K, headed up the road 15 miles to the only hotel room I could find, laid out food and gear for Saturday's race and grabbed some winks.

The usual drill flowed on Saturday morning. Up at 4:20am, fix the oatmeal, dress, pack and out the door of the hotel by 5. The skies were clear and we watched the pre-dawn sky slowly lighten over the prairie, an unusual and pleasant sight for us both. I stashed four bananas at miles 18 and 23 and we scored a sweet parking spot before 6. We had time to relax a bit and get oriented, walked to a Marathon Maniac meet up and photo op at 6:30 and then strolled to the start area. 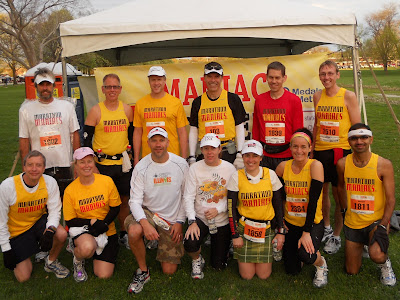 The weather was true to its forecast; it was around 48 at the start but headed to the low 60s by the end...nice temps. The kicker was the wind, out of the south, at 15mph at the start and up to 30mph by the time we'd get done. So, we dressed in some layers and accepted some chilliness at the start. 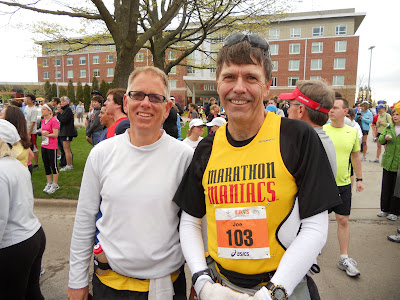 Promptly at 7:00am, off we went and another marathon was underway.

The plan for the day was simple. Darrell wanted to stay conservative and plan for a target race in July. So, he went with my run/walk ratio of 4 minutes running, 1 minute walking, with the run pace at about 10:00/mile. Doing the math (and Purdue engineers ALWAYS do the math) this works out to a 4:50ish marathon.

Other than some unneeded over-thinking of the busy opening pack on my part, the race quickly fell into a very nice groove. We ran 4, walked 1. We talked with each other, many other runners, the many residents who were out to cheer us on (or, in some cases, to scratch their heads as to why seemingly normal people would be running this early on a Saturday). We had a steady stream of miles in the 10:30 to 10:50 range. Once moving, the temps we perfect to run in and we enjoyed ourselves a lot. 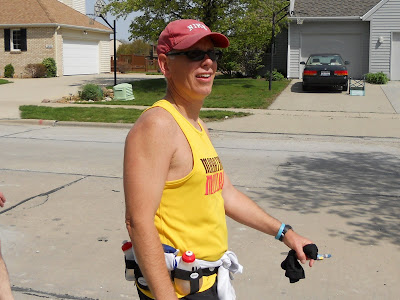 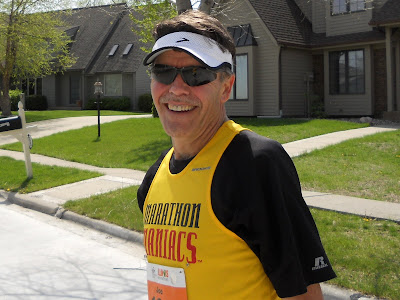 Once around the big loop from miles 18 to 23, the usual challenges began. In this case, Darrell just felt his legs' energy dropping off. But we were still enjoying ourselves. At mile 24.5, we noted the 5 hour pacing group leader passed us. We had truly hoped to come in under 5.

And Darrell was a true friend at that point.

He looked at me and said "Joe, I'm not moving that fast. I'll get done. But you go on ahead and see if you can't get in under 5 hours." I could tell in his eyes he was sincere. I thanked him, shook his hand and took off. I ran the remaining 1.7 miles without interruption and actually had my fastest mile of day on mile 26 at 9:12. The run into the stadium was fun and special. Final chip time was 4:56:57. Marathon #22 was done and I still felt good.

Darrell was fine...he held to the 4/1 all the way in and finished 5 minutes later. We enjoyed the atmosphere, picked up a third medal for the weekend as a bonus for running BOTH the 5K and the marathon.

We also some neat people. On the right, below, was Carrie. I spotted her wearing a World Vision shirt, an organization I have admired for many years. She was running to raise funds for needy kids in Africa. She was headed for South Africa later this summer. Since Darrell is heading to Zimbabwe himself in August and my wife and I lived in and around South Africa for six years, we had a good chance to compare notes. 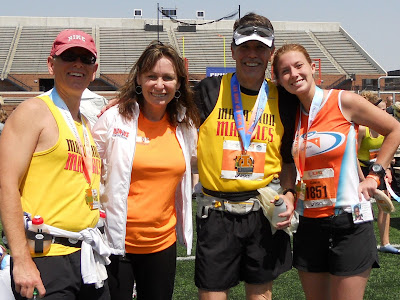 with Lorraine and Carrie

Between Darrell and me is Lorraine Moller. Lorraine represented New Zealand four times in the Olympics, winning the marathon bronze in 1988 in Barcelona. We heard her speak alongside Frank Shorter at the pasta feed on Friday evening. I had a chance to talk with her for quite a while on the floor of the stadium, discussing, among other things, how those of us who are introspective (as are many runners) can be more extroverted. What a country...you can have a chat with a sub-Saharan development expert about third-world education and a 4 time Olympian about human behavior all in one spot. I guess as marathoners there is a certain "acceptance" of others who have run 26.2.

Darrell and I headed up the long steps from the field to the concourse where we could sit down and get some water and food. I was surprised at how good simple cooked penne and marainara sauce could taste minutes after a marathon--thanks to the organizers for having fresh Italian food! It restored both of us. We were able to take a shower at the fabulous U of I intramural sports facility and then drove back to Chicago, when Darrell flew home on Sunday. He and I had a marvelous time. I'm grateful for Darrell's friendship. We have much in common and the conversation flows easily and seamlessly across multiple topics.

What did I learn from this marathon? Familiar topics were more deeply cemented in my mind:
-Weather matters. Temps below 60 always make for a much better race.
-Training mileage matters. The increased miles I have put in over the past few weeks helped.

Thanks for listening. And persevere!