Seldom have I had such a total failure at a race but this one just went very poorly.  My own poor planning  amplified the impact of heavy rain.   Here's the story...please learn from my mistakes!

The Dawn-to-Dusk 15.5 Hour Endurance Run  has been a fixture of the ultra community around Green Bay, Wisconsin for ten years now.  I only discovered it in mid May when a schedule change closed off one race weekend for me while opening up a chance to run on June 26.

As its name implies, the race extends from dawn to dusk and it is set annually near the summer solstice.   In northern Wisconsin, there is a lot of daylight at mid summer!   I was game and signed up, fully intending to see if I could last all day.   I came up short in a 12 hour race in April...I wanted to get back on that horse.

The drive north, in retrospect, may have portended a poor weekend.   Three hours into it, in deep traffic getting around Chicago, I discovered I had left my wallet at home.   No Drivers License, no credit cards, no cash.   Oy.   I called my patient and loving wife, who immediately located my wallet on our dresser and she drove north to meet me halfway to Chicago.   I turned around, drove south again through the still-heavy traffic.  I gave her a hug and, wallet firmly in hand, drove again through the (now later on Friday) Chicago car crunch.    What should have been a six hour drive took nearly ten and it was a bit frazzly.

I had booked a room in the nearby town of Manitowoc, Wisconsin and checked in fairly late.  The place was undergoing some renovation, so it was dusty and had lots of "loose edges".   I slept ok but the 5:08am gun time meant I was up at 3:30am to get some food digested and drive the 25 minutes to the start.

The best move of the day was scoring a perfect parking spot...with heavy rain forecasted, I didn't want to leave my gear out doors.   Thanks to a helpful volunteer in the pre-dawn darkness, I parked just next to the running path, making it simple to adjust equipment after each lap.  Only later did I realize I didn't bring the right gear.

The organizers have their act together.   We started right on time...even with the heavy cloud cover and light drizzle, we had enough light to make out the trail and off went our merry little band of 50 or so 15-hour runners.   The course was a delightful and varied 3.5 mile meandering loop through the woods of a private camp.   There was some up and down, with a couple of steep portions.   Much was on a "Jeep Track" with the last 3/4 mile shifting onto single track.   I completely enjoyed the first two laps.

As I headed out on the third lap, however, the light drizzle shifted to Real Rain.  Not a downpour but steady rain.   I noticed the wheel tracks in the route getting mushier and the lower spots filling with water.   The single track was getting slick.

After lap 3, I did something "new on race day"...yeah, I know you're not supposed to do that.   But it was raining so I shifted from my visor to my "Tilley Hat" 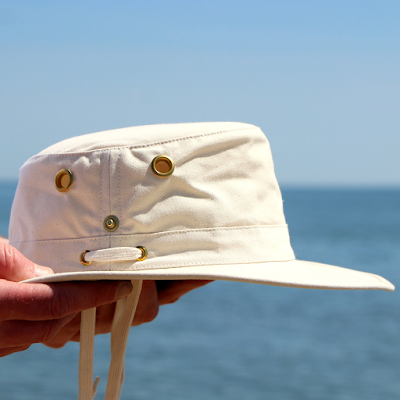 You've seen these...I have one too.   But I've never run in it.   I decided to try it, as it sheds water better than a visor or baseball cap.  Amazingly, it worked great while.   Not something you'll ever see in a running store...but it worked for me on this day.  I'll likely use it again.

Unfortunately, on lap 4, the hat was the only thing working for me.   The footing was getting muddier and slicker.  The combination of the runners and the steady rain was chewing up what footing we had.  My enjoyment was waning.

The fifth lap just got sloppier.   Many inclines were difficult to move up, it was so slick.   About 2/3 of the way around, I lost my footing and landed flat on my back in a large puddle.   As so often happens in the trail running community, two fellow runners were there in a flash to give me a hand up and check on me.   So grateful.   My right knee torqued a bit in the fall but mostly it was only my pride that was hurt.  I got my wits about me and kept going.   Yet, on the single-track that finished the loop, there were sections on which I could barely stand, let alone walk, let alone run.

By the end of that lap, seeing it had taken me over 5 hours to cover a mere 17 miles, I decided to hang it up and head home.  The rain had settled in for the day and I quit.

I didn't carry my phone around the course but did ask a volunteer to take my photo after I let the organizers know I was done.   Here's the front of me, Tilley Hat and all... 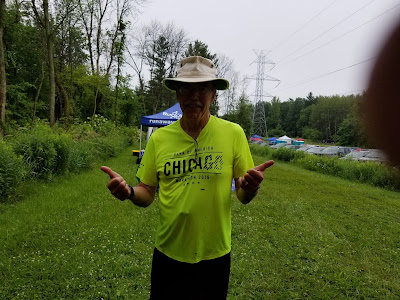 And here's the back with the evidence of my kersplash in the puddle.

As you'd expect, my shoes were very muddy, though they eventually cleaned up. 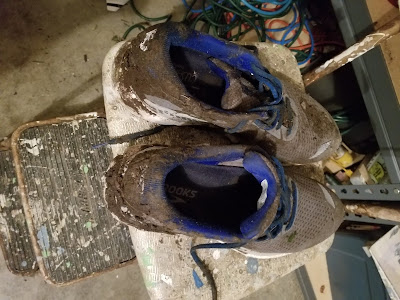 Each finisher did receive a nice coffee mug. 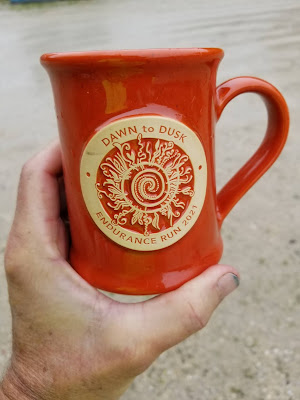 I was rattled, though, despite the good cheer and encouragement of the volunteers.   I changed into dry clothes, walked to the cookout table and had a tasty burger while chatting with one of the RDs.  The drive home was as woolly as the drive up, with heavy ran all the way, causing gridlocked Chicago traffic.  Another nine hours in the car and I was pretty well "done" by the time I got home around 10pm on Saturday night.
The real lessons of this race only became evident later.
The teaching started as I reviewed the race results a couple of days later.   While I thought in the moment that many other runners were struggling, I saw I placed 42nd of 49.  In the same conditions, most just kept slogging it out.   I was impressed and amazed and reflective.   Why did I bail out when others kept chugging along, despite the tough footing?  I had "toughed it out" in other trail races ... so why not this day?
I finally realized why.
I was not mentally prepared ahead of time for tough conditions.   This is because, in my mind, northern Wisconsin is a place of bliss, happiness and marvelous summer weather.   We've vacationed in Door County, Wisconsin for decades and summertime is perfect there.   So, I drove north looking forward to a nice day in the woods, never imagining even the possibility of bad conditions.
As a result, I didn't take any of the gear that might have helped in rain and mud, even though I saw this was in the forecast.    My fellow runners planned better for such a day.
So, I've made two changes to help me in future situations.
First, I made a new race-packing checklist for trail races.   Equipment for a trail event is often different from a road race but I have never made this distinction.  In particular, I need to have my screw shoes on hand for muddy races.
Second, I noticed at least one fellow runner grab a set of trekking poles from his car as the rain increased.   I've never used trekking poles but in this event, they would have been of huge benefit to maintain balance and progress on slick surfaces.   So, I ordered a basic set of poles and have taken them on a seven mile trail run already. 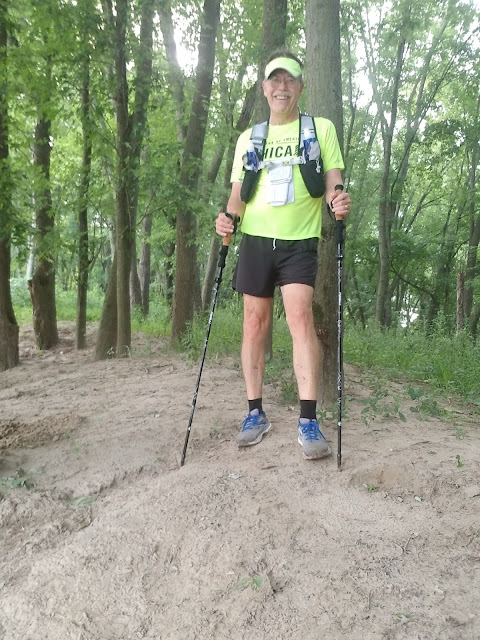 It took me 4 miles or so to get the hang of the poles but once I did I could see they really helped.   Surprisingly, Strava told me I ran this particular bit of local trail faster than I ever have before.   I'll keep working with them.
So, the race itself went poorly and driving through Chicago is seldom pleasant.   But there were some good learnings, even in this.   Not the least of which was finding this recipe for making a tiny, individual chocolate cake in a coffee mug.   A dollop of vanilla ice cream on top...I'm good with that. 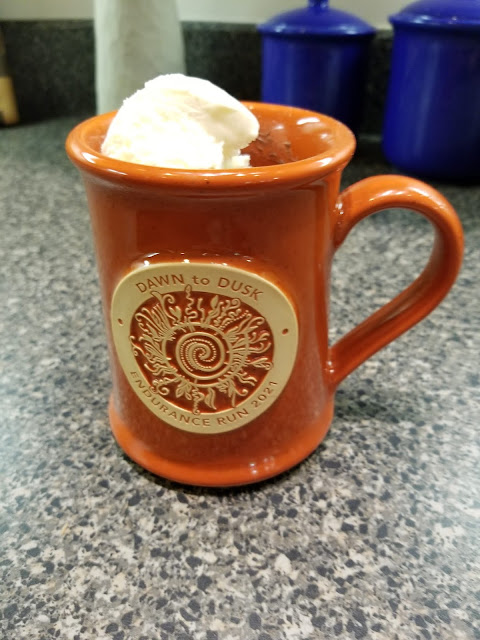 Thanks for reading.
Persevere.
.