Summary:   For the first time ever, I didn't finish the full 50K on the HUFF's Chain O Lakes course last Saturday, December 30, 2017.  The cold, the snow and poor footing, my feeling of being "out of it" led me to choose to drop out at the halfway point.  On balance, I'm fine with the decision.   But, it still bugs me a bit to have DNFed.

As I've written before and told many people, the HUFF 50K Trail Race holds a special, unique place in my running.  It's a year-end target that never ceases to amaze me.

I first participated on December 16, 2004, running a single 10 mile loop just seven months after the start of this era of running.  Until that day, I had never run trails at all.  I'd never run farther than 8 miles before that day.   So, it's funny to read now my race report of that day.  Dan Quayle, where are you now??  But, it was a big deal at the time.

I've written about all five prior HUFFs since the organizers had to move the race to its current location at Chain O' Lakes State Park.  Weather conditions in late December in Indiana give each year its own character .

2011:  The Deep Water Year. ( 7:33:44) The most philosophical I've ever been on my blog.  The lessons of that wet, cold, muddy day still hold, remarkably.  link  The 2011 race and the "aura" surrounding it has grown over the years.   When I meet anyone who also ran that day there is an instant bond.

Amazingly, 2017 became the seventh consecutive year of the HUFF for me.

This year's race was back to the preferred date, the Saturday between Christmas and New Years Day.   Weather was cold and with snow in the forecast for the day before and day of the race, I drove up on Friday afternoon, got my packet and basked in the Lap of Luxury at the Budget Inn in Columbia City.

Up early on race day, I scored a good parking spot just above the start/finish area...it's nice to have experience on a race setting.    I ate my oatmeal and turkey sandwiches in the car and napped, awaiting the 8:15am start.   I didn't really want to be outside too much when I wasn't running.   Starting weather was 12F, cloudy with light snow and modest wind.   I ended up with four tech shirts and a windbreaker, tights, and a couple layers on my head/neck.

The start grid was short and to the point.   I had a nice chat with long-time friends Walter Evans and Jen Savage.   The only photo of the day was with other running pals Bethany and Michelle. 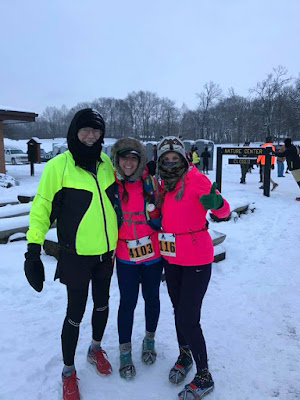 Yep, it was just as cold as this looks.

Off we went and it took a while to find a rhythm, as is usually the case.   The snow was somewhat powdery, though not as much as the 2016 powder levels.  It was cold and crowded and single track through the first four miles to the first aid station.   Not surprising and I knew the day would go that way.

The five miles between the first and second aid stations went smoothly.   The course is straightforward, the crowd thinned and it was fun.  I reloaded water bottles, ten miles done.   And I noted the sun was coming out.  And the wind was picking up.   And the temperatures were dropping.

The loop's last five miles get hilly, working up, down and along the signature ridge line of the Chain O' Lakes State Park.   Around mile 12, as I ran along the ridge, I noted the wind for the first time, blasting from the right.   My cheeks were freezing.  The previously cleared running tracks were drifting in.   My pace was slowing.   And I had 3+ miles to get to my drop bag and start loop two.
The ups and downs of my spirits matched the ups and downs of the terrain.   I was cold and, mentally, really not into the race.   As I neared the halfway point,  my run pace slowed more and more.   What do I need to prove?  Could I even get around this loop once more?   I looked at my watch, realizing I'd be pushing four hours to complete the loop the first time...the slowest ever.   The wind kept picking up, the windchill was dropping.

I decided to drop out.

It was simply the better decision.   While I enjoy running a lot, it is not my central identity.   Having run HUFF six times before, I had nothing to prove.  As running pal Elizabeth has written, nobody cares about your running time.  I settled it in my own mind.

The final half mile or so around the lake to the start/finish line was slow and cold, as the wind was most pronounced in that open area.  I was grateful for a knowledgeable volunteer who wrote down my number as a DNF.   I really wanted to know they knew I was dropping.   It would be awful, as a race official, to not have a full accounting of all runners in such weather.   I grabbed my drop bag from the tent, had a couple of spoonfuls of warm soup and headed for my car, my torso already chilled.

On the drive south from the state park, I got a fuller sense of the severity of the storm.  The west wind at 25 mph was blowing snow over the north-south road and drifting it shut.  The temperature had dropped to single digits, with wind chills dropping well into negative territory.   It felt an existential struggle with Nature to survive.   I was glad to be driving in daylight, not dusk to darkness, which is what a second loop would have brought.