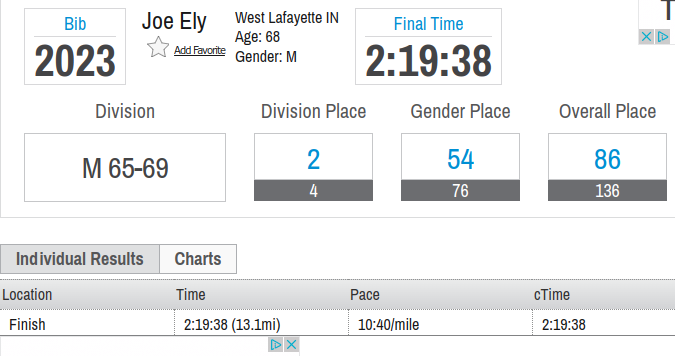 It’s fascinating how an ordinary running event can yield

significant moments.   Such was the Fair on the Square Half Marathon.

I was very pleased with my race plus found other insights

along the way, most in a surprising fashion.

In early August, I had an awful race.  On reflection, I modified

my autumn race plans significantly.   I chose to reduce the

for the Monumental Marathon on Nov 5 and the HUFF 50K

to enjoy these two major events.    I had registered to run the

back to half marathon and use it as a “workout with friends.”

Most of August remained a running bust however, as a

out of reach.   Only in the last week of the month was I able

We went to Door County, Wisconsin starting the Labor Day

weekend for a marvelous nine-day vacation. The program

feeling better, I clicked through the first four Monday thru

Thursday and drove home Friday.  The plan was to drive

early to the race site, run 3 miles to warm up, run the

half-marathon and then another 3 to get in the 19 for the day.

There was an unexpected detour on the state road approaching

the race location, however.  Shortly after getting back on

the main route, I got an alarm of low pressure on my left front

tire.  Sure enough, I heard an odd sound from that tire, the

to pull over.   I found an abandoned driveway in the middle of

the country, got out, and experienced the deflated feeling of

looking at a tire going down.

Nothing to do but to fix it, so I pulled out the jack, spare and

the one thing that made me smile a bit: a dedicated lug nut

wrench.   Years ago, a friend suggested having a proper socket

wrench in the car rather than depending on the stamped-out

wrench supplied with cars.   It worked.

And then an angel showed up.  A random guy had just dropped

his daughter off at an early volleyball practice, saw my situation,

pulled in, positioned his headlights since it was still pre-dawn

and helped me out.   We got the flat off, the spare secured, a warm

handshake to my new friend Brook, and off I drove on the final 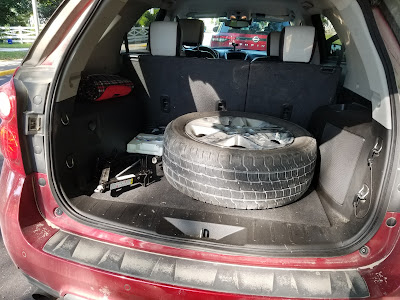 I parked 18 minutes before the gun.  Good thing it was a small event,

as I grabbed grab my bib, made a trip thru the porta pot line and

walked into the starting grid just as the National Anthem played. The

flat tire obviously wiped out my planned 3 mile warm up.  I barely

stretched.  And the race started at exactly 8:00am. 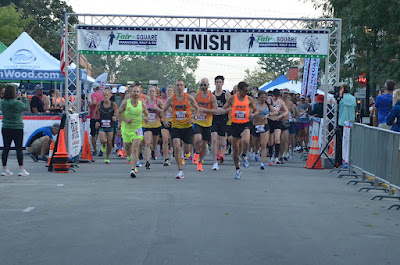 I got rolling in the back of the pack. 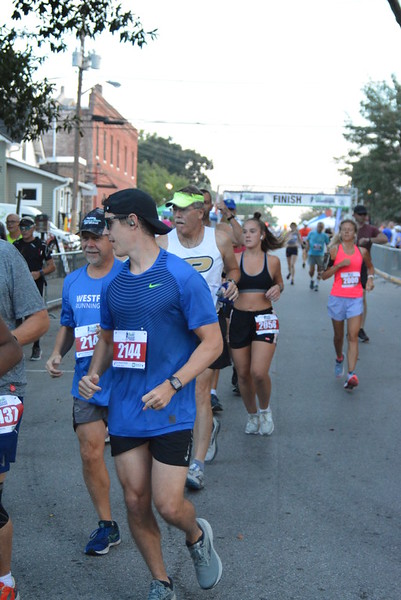 with friends and not as a race.   So, I didn’t push things early, focusing on

just getting loose.   Early on, long-time friend Jen spotted me and we

had a great chat, not having seen each other since the pre-Covid days.

That was a treat.   We chatted a longer time post-race. 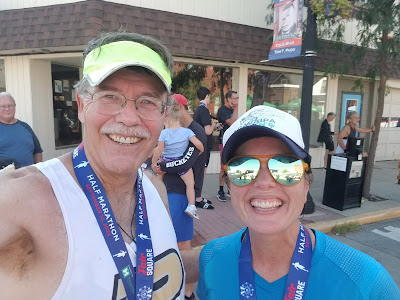 By mile one or so, I was moving comfortably using a 3/1 run/walk ratio

west end of the rectangular course at about mile 5 and I was feeling good.

for multiple hours?”   It's a good question.  On this day, the question “what

is my role in the world as a retired guy?” was big on my mind.  This was

prompted by observing striking examples along the course of both rural

poverty and rural opulence.   We were up close with both as the race

moved along.   During my working career in manufacturing, I felt strongly

and have the opportunity to progress.   Folks living in rural poverty could

get a job with us and move ahead.   So, now that I’m retired, how do I

positively impact those who are regarded less-well by society?   That was

much on my mind this day and often while I run. 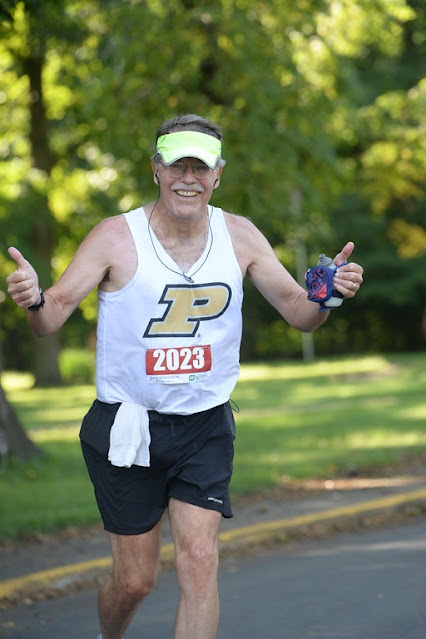 Around mile six, I was surprised by a phenomenon I have seen many

times in the past but not much recently.   I noticed I was gradually passing

people but not getting passed, even as I retained the run/walk cycles.

I laughed...years ago, I observed it was often about an hour into a half or

full marathon that I’d begin to one by one pass people with few passing me.

Such was the case again and it was kinda nice.   By mile nine, I noticed

I needed to tell myself to slow down the pace during the run cycle...I was

feeling better and better.    It’s been a while.

Around mile 11, we were back into town, with some zigs and zags through

neighborhoods to get the mileage right.   I did some quick math at mile 12

and realized if I hustled, I could finish under 2:20.  As I did the math, I laughed

out loud.   What is it about us runners which drives us to try to get under

some arbitrary round number?   I know I’m not alone.  I don’t fully understand

it but the drive is real.   I picked up the pace and with about a half mile to go, 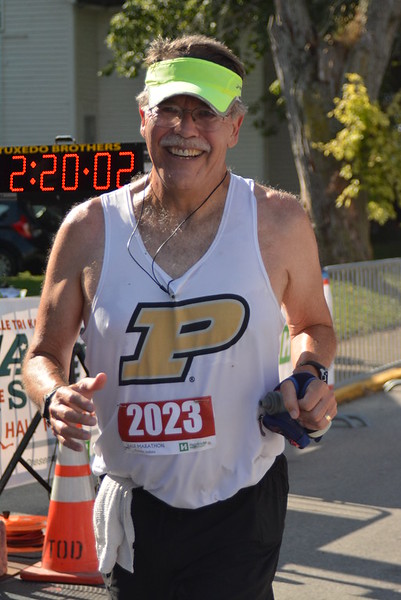 Across the line, I chatted with a few folks, with a particularly pleasant

conversation with local running pal Hacene who had also driven down

for this HM.   He too had a  hard time on the detour but his tires stayed

inflated.   He’s a great guy and also very fast.  I can only chat with

him pre and post-race! 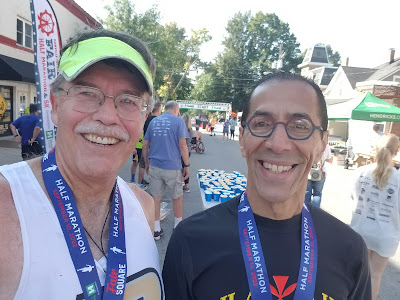 They started the awards ceremony just after I finished.  Amazingly, I came

mind you, but second nonetheless.  And my wife likes the size and heft of the glass. 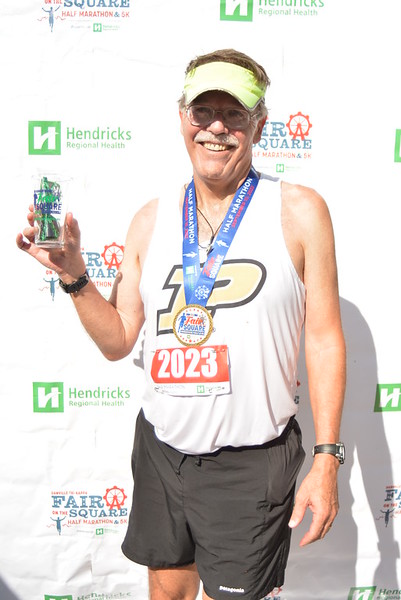 The Rest of the Miles

Work remained, however.  Since I didn't get three miles in pre-race, I

needed to do six post-race. I refilled my water bottle, walked back to my

to the ten mile marker, then back to the finish.   I saw a few of the fast

marathoners finishing their second lap but was mostly by myself.   The last

mile or so got hot but I finished the six. I walked back to the finish area,

treated myself to a DQ ice cream bar, changed into some dry clothes

and got on to even more work.

I didn’t want to drive the 70 miles home on the spare tire, so I located a tire

repair place nearby which was open, sat in their waiting room for an hour

Saturday afternoon.   Home around 4pm, making it a much longer day

than I had imagined.  Still, it was a surprisingly successful day.

What do I take from all this?   First off, training miles matter.   I was finally

on a better weekly total and this helped.

Second, I gained some clarity on how I continue to approach retirement.

Reflection on this open course was helpful.

Third, I was thankful I had a lug nut socket wrench in  my car.   That

made the flat tire an annoyance, not a crisis. 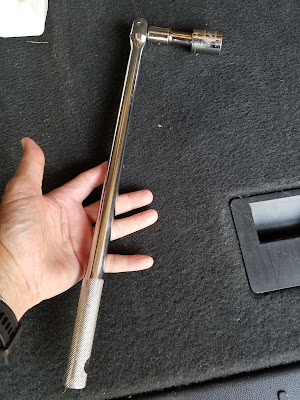 Thanks for reading.   Hope you can get your miles in and avoid

nails in the road.

Aw, I've met Jen. How cool to run into her at the race!
Way to go! You didn't let the stumbling blocks in your road to the race. :)