These races on consecutive Saturdays formed a planned experiment and the experiment was successful in that it showed me what I wanted to know.   The question?  Just what is my current endurance limit?

I’ve run this race maybe eight times now in it’s 11 year history.   A flat-ish course through tony suburban streets on the north side of Indy, it was the first “real road race” I’d run in 18 months.   Weather was chilly, with increasing winds all morning straight out of the south, getting to 20mph by the end.   The atmosphere was great, though, as about 4,000 runners showed up for the combined 5K, 10K, HM and Marathon distances.  It has been a long, long time since this has happened due to Covid and the collective spirit was great.  People were very careful to wear masks pre-race and the grid was way spaced out.   More than a few folks were there to attempt a BQ ahead of the April 20 opening of Boston Marathon registration.

I was hoping to run with the advertised 4:35 marathon pace group. Alas, that pacing person didn’t show up. So, I fell in with the 2:15 half-marathon group to try to find a groove and this worked wonderfully through 13.1...hit the halfway mat at 2:14:23...spot on. Then, I was on my own. It soon became obvious my HM pace had been too quick.  By mile 16, I was really feeling things and had to shift to a run/walk pattern and it was a slog through mile 23.  It was striking to me just how long it had been since I had run a road marathon.  I had forgotten about navigating runner traffic, getting in and out of crowded water stops and keeping my wits about me.  Amazing. 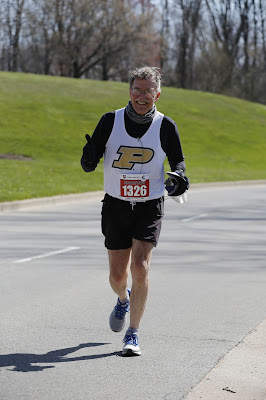 I had a treat around mile 23, though.   Work colleague and running friend Michelle had run the HM, had to stick around Indy to get her Covid vaccination later on Saturday, so she ran out to mile 23 and ran in with me.   It was a pleasant pick-me-up.   We talked at length about several work-related topics of interest and it helped to take my mind off of my poor performance.   Retrospective examination of my splits showed I ran faster too once she showed up.    These final miles were directly into the wind, adding some extra work but the final two tenths measured at a 8:50/mile pace. 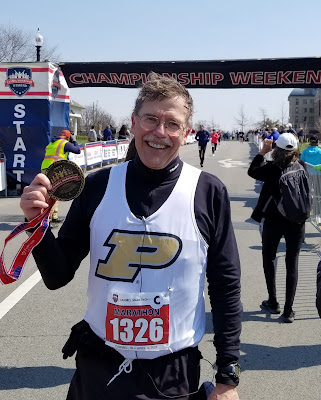 Yeah, so you then ran even longer a week later?   Indeed.   That was the essence of the experiment.   On “tired legs”, how long could I run??

This race was a first-time event and happened to be in the town our oldest son and family now live.   So, I could spend the weekend with them and run...a nice combo.

I ran a 12 hour race last June and enjoyed it.   I had a modified strategy based on what I learned and

I was keen to see how it would work.   A simple plan...do a run/walk sequence of run a minute,

walk a minute and see just how long I could maintain that pattern.  I gave myself permission as well

to “recover while moving” which is a fancy way of saying “walk more if you need to”. 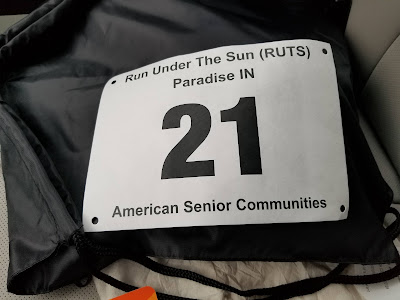 and round we went.   I backed my car into a spot right next to the course and had all my fluids, PB&J,

And I needed most of that pile. 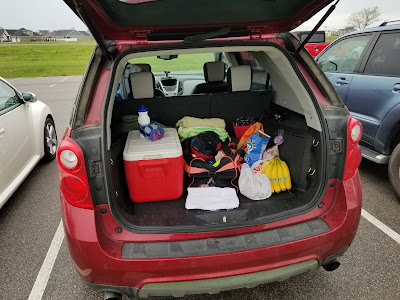 We started on schedule at 8am.  123 people paid registration fees for the three time frames offered

Weather was quite the factor on this day.   It was cool and cloudy most of the day with temperatures in the mid 50s.   Being a new park with no large trees on a high spot, it caught all the wind...it steadily pounded us between 15 and 25mph all day.   It drizzled much of the morning, a light but steady moistness.   It dried off from about noon until 4pm, when we had a 20 minute heavy downpour and then the temperatures dropped into the mid 40s by the end...still windy.   The wind was relentless and became wearisome over the course of 12 hours. 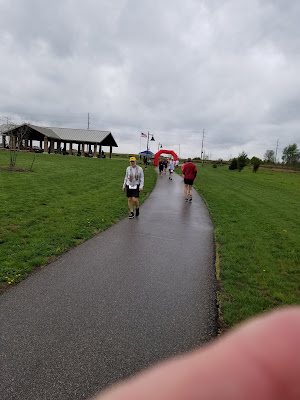 The run/walk strategy worked quite well for nine hours.   I was comfortable and kept steady mile splits of around 11:30/mile through mile 21.  Miles 22 to 37 were around 12:20/mile.   From mile 38, it was more walking than running and the pace was from 14:30 to 15:30.   I hit major distance marks, with the half-marathon in 2:38, Marathon in 5:27 and 50K in 6:34.
In the midst, it was a treat when our son, wife, her dad and all three of their kids came out to watch me run for a while mid-afternoon...they managed to arrive during the most lovely 30 minutes of weather we had all day...fun to see them and sense their real encouragement! 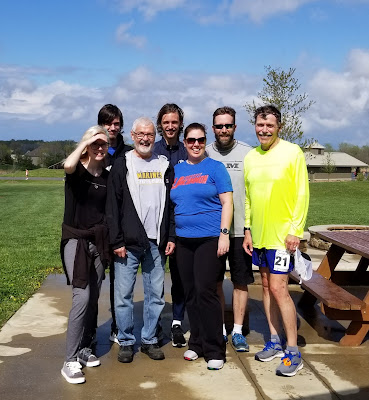 Somewhere around mile 46, near the 11 hour mark, 7pm, I felt fully depleted for the first time all day.   I had really wanted to NOT stop at all but rather to keep moving for the entire 12 hours   But the wind kept pounding and so I stopped for about 15 minutes, sat in my car out of the wind and collected my thoughts.   I was pretty close to done but I really wanted to get in 48 miles.   So I got back out and mostly walked for another couple of miles and when my Garmin hit 48, I finished that lap and called it quits, at about 11 hours and 25 minutes with 48.1 miles.     In retrospect, I could have continued to walk for another 35 minutes but my mind was really done with it and I wanted to head back and see my family.

Results showed I finished 15th out of the 53 12-hour starters.  I was very pleased with that position.   Identical, proportionally, to my finish in the 12 hour race i ran last June.The top three men ran 73.6, 66.8 and 65.7 miles respectively.   Those guys just never quit running.  The top three women ran 51.1, 49.4 and 47.1 miles.  It was impressive to be with all these amazing athletes   Only about 20 of us were still present on the course for the final hour.

The Results of the Experiment

So, class, what did we learn here?   Since January, I had been seriously toying with the idea of entering a 100 mile race this coming autumn...there are several I can get to easily.   So, I needed to see just how I would do, on tired legs, through 12 hours.   Would I feel good enough to realistically think I could repeat it again, all night, in the dark, to get 100 miles done??   I had to try.

And the answer is, no, that’s not realistic.   And I’m fine with that.   Because the answer is also, yes, on tired legs I can go 50 miles.   And that’s nothing to sneeze at.   All useful.   Class dismissed.