"Are you crazy?  Yes, you are crazy."   This is the almost universal response when I told people I was planning to run two marathons in a single weekend.  I've grown used to it.   I just like to run and these two races fell out wonderfully on my 2017 running calendar.

Actually, I have done two marathons in a single weekend once before in September, 2014 (link).   I've wanted to do it again but a lot of logistics have to fall in place to make such insanity possible.   The 2017 version fell into place because I didn't need to run either marathon for time, the two marathons were in reasonable driving distance from my home and from each other and the weather had a chance to be favorable.   In addition, the two races have a loose alliance with one another, calling completion of them both the "Mittens Challenge".  So, I signed up around the first of the year and the big weekend finally arrived.

I've run the Wisconsin Marathon three times before, so was quite familiar with the course and logistics just north of Chicago, across the Wisconsin border in Kenosha.   I took Friday afternoon off from work and headed north.  Packet pick up was a breeze.   A treat was having Friday night dinner with Laura and Jake Gillette and their two kids.   Midwest runners will recognize both their names, as both regularly win and place in marathons around here.   I've had the chance to get to know them as they both won the Circular Logic Marathon three straight years.   Great folks and it was fun to share bowls of pasta and talk running and raising kids.

I awoke around 4:30am on Saturday for the 7:00am start time and scored a primo parking spot by getting to the start area so early.   The temperature was set to be near perfect, in the mid to upper 40s at the start; the only question was how the wind would behave.   As the course flows along Lake Michigan for the entire 26.2 miles, the breeze off the lake can be severe.  The 2016 race proved that, in spades.

As the sun rose, runners assembled.  I saw a lot of folks I knew, including Heather Ziegler, below, a fellow Marathon Maniac and a truly excellent runner. 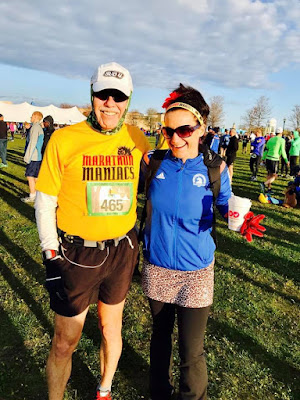 I decided on layers for the day...I wore two short sleeve tech shirts, tube sock arm warmers, a neck warmer, hat and mitten/gloves.   I picked all this as it was adjustable as the day warmed and as we varied either into or with the wind.   And I wore this sign on my back to make the case. 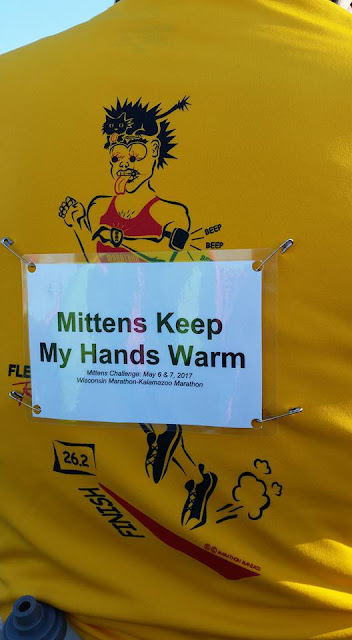 The race started on time and the new course was a little different than we had run the past two years.   We went farther south during the first half than in previous years, made a loop and headed back north.   During this out and back, I saw Jake Gillette amongst the leaders.   Since I didn't see the first runner and since the half marathoners were still in the mix, I didn't know just where Jake ranked.   But I did turn around and run for 50m or so with Jake, wishing him well.   And, man, it felt different to run a leader's pace, even for such a short distance.

I started out and held my run 3 minutes, walk 1 minute routine from the start of this race and, as it turned out, I held that through the entire weekend, until the final two miles in Kalmazoo.   But I jump ahead.

At about my mile 7, I saw Jake again, now waaaaaaay ahead of me.   I had counted all the leaders and confirmed for him he was in third place for the marathon, about 100 m behind the second place guy.   Again, fun to run that fast and Jake told me later the intel helped him.   He ran hard, but so did the other guy...he ultimately took third.

Around the  half way point, the new course had us looping near the start finish line.   Laura Gillette (who was watching their kids as Jake ran...the reverse would happen the next day, when she won a marathon farther into Wisconsin as Jake took care of the kiddos) managed to snap a photo of me plodding along.   I hit the halfway point at 2:24:00 and felt fine. 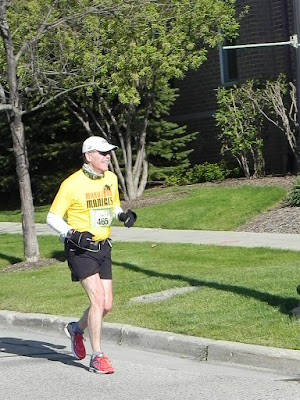 We continued south on the second half of the marathon with the wind generally at our back.  This portion of the course spent more time on gravel roads on the south portion than it had before.   This altered the nature of each stride, compared with asphalt.   I didn't like it as well as the previous course but I suspect it worked better for local residents.

My pace per mile was in the upper 10 minute range for most of the race through mile 19.   Around 19, we turned into the wind as we headed back home and the wind was steadily picking up as the morning wore on.  The combination of fatigue, wind and gravel combined to push the average times to the mid 11 minute range.   It was what it was.   I was very cognizant, as well, I was not yet half way through my weekend of running. 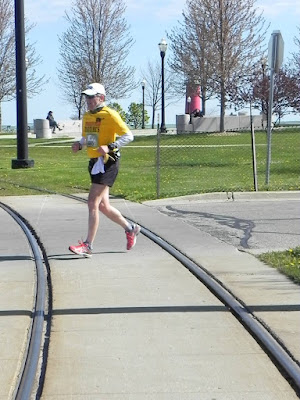 The finish of the race was fun...I was glad to have it over, wondering over the final mile just how the next day would be going.  Yet, as soon as I crossed the finish line, I had huge fun with the volunteer handing out medals.  I told her this was as close as I'd ever get to the Olympics, so "we need to be serious"!!  I then sang the Olympic theme song as she somberly placed the medal around my neck.   Two very European "air kisses" followed and we both then cracked up...she got the joke and played along wonderfully.   Yeah, I was feeling better already.   Lifetime marathon #73, done.

My fascination with logistics then kicked in, immediately.  I grabbed a couple of bottles of chocolate milk and plenty of cheese (this is Wisconsin, remember) and headed for my car.   I called in the results to my wife as I drove to the Kenosha YMCA, where the race had arranged for free showers for any runners, a wonderful feature for us out of towners.   Cleaned up, I grabbed a quick lunch and headed for the Kalamazoo Marathon.   It was around 1pm.

Driving to Kalamazoo from Kenosha involves traveling around Chicago.  Fortunately, it was Saturday afternoon, there was no major construction going on and there were no accidents to snarl things.   Looping around the Lake and heading into Michigan without stopping, I arrived in Kalamazoo around 5:30pm.   Having never been in Kalamazoo proper before, I depended on my GPS to get around.   I swung by the Start/Finish area to gauge where to park and how the start would work.   To my surprise, I saw one guy setting things up who turned out to be the committee member in charge of the finish line.   He was super helpful, explaining start logistics and best parking plans.   He really put my mind at ease about race morning.

Eventually, I found my hotel and then some nutrition for the evening.   I had a long phone call with my wife once I got in for the night, as we had our house up for sale and, out of the blue, had received a serious offer on the house late on Saturday evening...yeah, I like I need something else to think about!!  Bedtime at 11:00pm was later than I would have liked but that's how it fell out.

I was up early again and into my car around 5:15am.  A few fellow residents of the hotel had not yet gone to bed yet and were quite drunk and quite boisterous.  I'll just say they loudly queried what I was doing and were not of mental acuity to comprehend a marathon.  I scurried away and hope they eventually slept it off.

Thanks to the advice from the volunteer, I knew right were to park and was the second car in the lot, a mere 80m or so from the start/finish line.   Two mornings in a row, two primo parking spots.  Sweet.

Pre-race was nice in two ways for this race.   First, was packet pick up...they had a special tent set up just for folks who were running the Mittens Challenge.  Since they understood we'd get to Kalamazoo late, they let us get our packet on race morning.  It was fun to see a number of folks I had run with the day before, swap stories about Chicago drivers and get set.

The second was the opportunity for Christian worship pre-race.   I had seen this on the race info and it was really nice!  A local pastor who was running the half-marathon led the open service.  He had some good stories and scripture application and it was great to sing familiar music as runners gathered for the race.   It meant a lot to me.

The weather was a bit cooler than on Saturday, with the temperature just at 40F for the race start.   I opted for one extra layer underneath the Maniac shirt and everything else was the same as on Saturday.    Right on time, the race started and off I went, again.

I hoped to finish around 4:50 again but had no familiarity with the course so didn't know just how that would work.   Not surprisingly, I was also stiff early through the hammies, glutes and lower back.  As they had pacers available, I fell in early behind the 4:45 pacing group as their slowness felt just right.   I stuck with them for well over an hour, as it felt very comfortable.    Around mile 8 or so, we got into some uphills and so I fell out of that group and switched into the 3/1 run walk again.   We looped in and out of the Western Michigan University campus, a fine looking place with which I was totally unfamiliar (other than they correctly spell their mascot as "Bronco" unlike a local high school team in my town which spells the same mascot "Broncho" but that's a different story).

From there the race just took on a fun nature.  Here's a few points:
All of this was climaxed with an amazing thing just before mile 24.   The elusive but famous "second wind" set in for me.   I felt fantastic.   I bid my new teacher friends adieu and proceeded to run the final two miles, to enjoy the moment and the running conclusion of the big weekend.   There was one short, steep hill which I walked, chatting with a very friendly volunteer there to encourage runners at this tough moment, and otherwise just tried to pick up the pace.   Splits showed I dropped my pace from the mid 11s to 10:24 and 10:26 for the final two miles.

We made the penultimate turn and I was just feeling awesome.   You get a sense of that in this photo from that section. 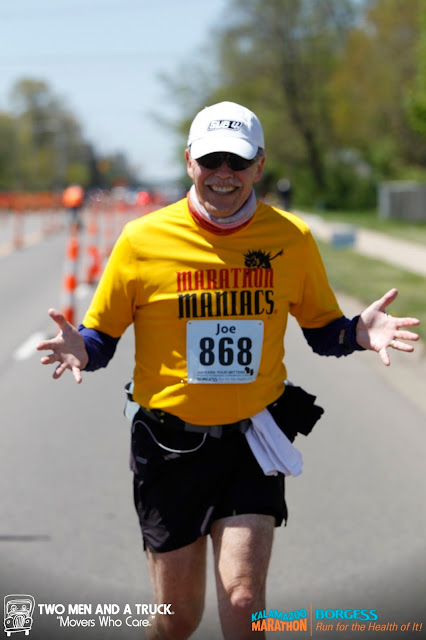 You're not supposed to feel this good after 52+ miles of running over one weekend.   But, bumblebees aren't supposed to fly, either.    I turned the final corner and it was a joy to cross the finish line.   I got my two medals (one for the marathon, the other for the Mittens Challenge) and then just hung around the finish line for a while, as if I didn't want the day to end.   I greeted my teacher friends and other folks with whom I had run.   It was a blast.

I did finally head home, a four-hour drive to wrap up a most enjoyable weekend.
A few timing statistics emerged after the dust settled.


So there you have it.   Hope you enjoyed the story...I sure enjoyed the weekend.  Thanks to both races and all the volunteers and organizers.

Persevere.  No matter where or if you run.