As the summer ends over this Labor Day weekend, so my attention shifts to the fall marathon schedule. Three await, the United States Air Force Marathon coming up first, a mere three weeks from today.

Which means my last long run was this morning. Out the door at 6am, I saw the sun come up and had a marvelous run. 4+ hours later, I was done. Man, it was fun. Just go and run. And run. And run. I could well have gone another 3 miles…in fact my last two miles were almost exactly the same time as my average pace. It is long training runs like this that remind me why I enjoy this sport so much. I found myself smiling a lot over the last five miles. No way I can explain that to anyone else but runners will understand.

To get in 23 miles, I have to add a loop through Purdue’s campus. With no football game today, the campus was quiet as the dedicated young scholars all remained asleep. I did run past the dilapidated old house I lived in for two years as an undergrad. The place was pretty rickety back in 1972; I’m stunned it is still standing. But, as they say in real estate, “Location, location, location.” I was temped to knock on the front door and ask if the kitchen cabinets were still rusted.

A little later, I talked with long-time friends Dick and Marilyn. Long retired, now in their early 80s, the two of them are in great health, marvelously upbeat and wonderfully involved in the community. To wit: each Saturday morning they go on “eco walks,” strolling along the running path picking up litter. A small public service, indicative of just who they are. I wanna grow old like them.

So, now we taper and in the absence of high mileage, I’ll share more of the plans for the fall over the next couple of weeks.

While we persevere, as always.
Posted by Joe at 3:33 PM 6 comments:

No Cornfields on This Run

A late-breaking business trip landed me in southern California yesterday. I didn’t know even where I’d be staying and awoke this morning at a hotel in Newport Beach. My body was still on Eastern Time, so I was up way early. Needing a run, I wandered out the door of the hotel.

And what a find.

Just outside the hotel was the Back Bay Loop, a 10.5 mile trail around a beautiful piece of water, just off the Pacific Ocean. I set out to explore it and was treated to one of the best runs I’ve had in a long time. 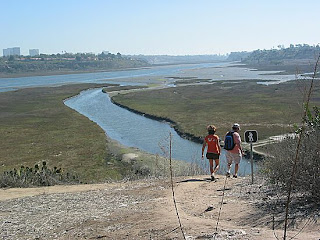 The paved path provided a wonderful view of the bay. There were a lot of runners, bikers and dog walkers. On the way out, I discovered a parallel trail, unpaved, with grit and sand and more ups and downs. What fun. I reached a turn around point way too soon. Heading back, I stayed on the dirt/sand more than the tarmac. I run on tarmac all the time in Indiana…when in SoCal, I wanted to do something different.

It was a run I hated to see end. I had to flip back to Professional Business Person Guy mode. Of course, PBPG pays the bills, so not a big problem with that.

My apologies to my southern California friends about not letting you know I was coming but this happened too quickly and I had no idea what my schedule would be. Thanks for understanding.

We persevere through all our training runs. And sometimes, a really cool run emerges.
Posted by Joe at 2:08 AM 9 comments:

Like many of you, I’ve been fascinated by the Olympics this past week. I sat entranced last night watching the entire women’s marathon. I appreciated NBC devoting so much time to the event. All of us who have run 26.2 sat in awe of their pace, endurance and strategy of the event. Gretchen and I had a personal treat to see a woman from our former African residence of Lesotho hang with the leaders for 16 miles. The athletes from familiar sports provide much inspiration.

Surprisingly, I’ve also found instruction from other, less familiar sports. Most strikingly to me has been sculling. These rowers, particularly the teams of four, show me so much about the importance of form. As these teams glide the pencil-thin hulls in a perfectly straight line, with 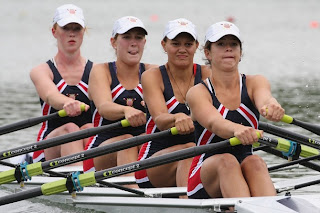 perfect cadence, working as one, it is a thing of beauty. Watching the close-ups, it is amazing to see the subtlety of each stroke. They rotate the blade of each oar on each stroke. Each arm has to work equally with the other one. The timing had to be coordinated. Oh, and by the way, they are racing the other teams.

All of this centers on perfect form. Which instructs me. I have to pay attention to my running form. Without attention, I tend to arch forward, hulking along, putting strain on my back. With attention, I get my head up, hips forward, hands lower and move close to gliding than plodding. Over and over. I’m not to a point of good form being second nature, like these skilled rowers. Maybe some day.

I’ve been inspired and instructed. A good basis for perseverance.
Posted by Joe at 6:58 PM 5 comments:

What a wonderful morning for a long training run. The twenty felt good…pace held up well. My legs felt it a bit at the end but no real difficulty. With the humidity down and temps between 60-72F over the run, it was a surprisingly enjoyable summer run. One more 23 miler in three weeks, then the first fall marathon on Sept 20.

Flipping the calendar to August made me realize I had missed an important anniversary in July; it was 30 years ago I started running. Allow me a brief history.

We were living in Swaziland, Africa when our oldest son was born in March, 1978. I realized I had become woefully out of shape. While I had played multiple sports through High School and a bit of baseball at Purdue, I had no outlet for conditioning as a new Dad living in Africa and was grasping what to do. With no real knowledge, I just started running. Out in the morning, seeing if I could first run a mile…then two…then three. Although I had hated track in High School, I found I really liked it. 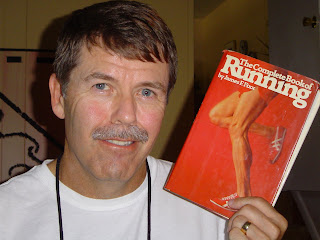 We came back to the US for a vacation in the fall of 1978, and I discovered the first “running boom” in America had started. I devoured Jim Fixx's classic The Complete Book of Running. I ran my first race on November 11, 1978, a small 5 miler, finishing in 35:32. I was hooked.

We headed back to Africa, moving from Swaziland to Lesotho where we spent three years. I ramped up the training and entered my first marathon sometime in 1979. Temps in the 80s with no water stops for the 30 entrants left me fully dehydrated after mile 21. I regrouped, planned better and finished my first marathon on August 2, 1980. In a field of 150, I ran a 4:17 and was next to last. The quality of African running has always been strong. I ran another marathon five months later in 4:16; I beat two guys. And they were guys...we never saw women running at that time.

We moved back to the US in late 1981 and I continued running. Raising a family, settling into a new job, going to graduate school all cut back on my training miles but I kept running. I entered a lot of 10Ks and half marathons through the 80s. As my two older sons got into sports, I started refereeing soccer, a hobby that lasted through the late 90s. I ran to stay in shape for soccer; it worked pretty well. In the back of my mind though, I wondered if I’d ever run another marathon; the desire was there but I couldn’t see the path.

A cool job popped up in 1996, the only down side of which was 70 minutes of commuting each day. That drive pretty much wiped out running and, eventually, even soccer. I struggled to find a way to stay in shape in limited extra time. My weight crept up and the conditioning leaked away. Then, out of the blue, an even cooler job opportunity found me in the spring of 2004 with the added plus of being less than a mile from my house.

Over the one weekend I took off between the two jobs, I determined to begin running again. I exchanged the time I had been commuting for running and it seemed to work. I found newly-constructed trails near my house, measured some courses and started back running. And I had no idea what I didn't know.

In the 17 years since I had run a road race, a new generation of shoes had emerged, about which I knew nothing. I started hearing of “technical shirts” which I assumed to be a cotton T-shirt with an integrated circuit embedded. There were hardly any 10K races, only 5Ks, it seemed. Running was new, all over again. My knees and Achilles kept hurting. I wasn’t really sure what I was doing. Yet, it was great to be running regularly again.

I ran my first race of the new era over the Labor Day weekend of 2004. A simple, local 5K fund-raiser, I wondered if I’d be able to run it without stopping. I did, finishing in a very modest 29:45, despite wearing two neoprene knee braces. More importantly, I felt the rush of race day. It was awesome. During the fall, I discovered a good running store in Indy which reintroduced me to Brooks shoes. The pain went away and running started to click again.

The distances moved up. More races. Since I was already had a professional blog, I searched out running blogs and learned more. I began to think perhaps, maybe, just possibly, I could do another marathon. On April 9, 2006, it came true at the St. Louis Marathon. I ran a 4:29 and beat more than two other people. And this blog contains most of the rest of the story.

Thanks for listening…it is fun to recap 30 years of running. Blogging has been a huge part of this new era. What I’ve learned from all of you can’t be quantified. The camaraderie, the knowledge, the ups and downs of all of our experiences means so much to me.