The plans for this weekend started one way, a long time ago, and then shifted and shifted....and it all worked out OK.

Last November, in my plans to see if I could run a 4:30 marathon this spring, I registered for two in April...the Carmel Marathon on April 9 and the Illinois Marathon at the U of Illinois on April 30.   I guessed I’d have a better shot at decent weather by picking two, rather than depending on just one spring marathon.

Well, sometime over the winter, the Illinois Marathon organizers sent out a note saying they wouldn’t be hosting a marathon after all.   It seemed they could not hire enough off-duty police officers to supervise all the street crossings in Champaign-Urbana for a full 26.2 mile event.   Thus, the event became a Half Marathon on Saturday, April 30.   They also offered a one-mile and a 5K race on the Friday evening before.   I opted in.   And, with the way the Carmel Marathon shifted my planning, it was just fine.

Race weekend weather was not favorable but it could have been far worse.   The forecast called for high wind and rain on Friday night and most of the day Saturday.   It turned out to be mostly just very windy, yet the meteorologist became a central figure.

Here’s how each race played out.

The utter flatness of the U of I campus allowed for a unique race; a straight-line, flat, one-mile run on Third Street, from north to south.  Not many ran it, only 227 folks, and it seemed disjointed (in contrast to the perfect organization of everything else for the weekend).   But we got started about 15 minutes late and I resolved to try to run it as hard as I could, hoping for a time with a “7” as the first digit.

I took off trying to find a pace I thought I could hold the entire distance.   It was simple to look at the per-mile pace on my Garmin to see how I was doing.    I was holding to a sub 8 well past the halfway mark.   Then, it got a bit more labored.   With about 200m to go, I was digging deep and the pace was still slipping.   30m or so from the finish line, I was simply out of gas and could only jog across the finish line.   8:14 on my watch was disappointing...bent over double, gasping for breath let me know I had given it my best shot. 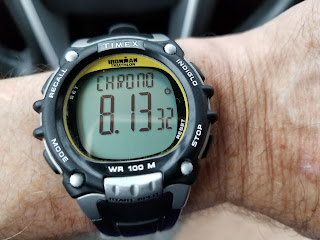 I was nevertheless encouraged to rapidly, within a couple of minutes, have my breathing back and my heart rate back down to normal.   I ambled back to my car to get a dry shirt and run a 5K about 35 minutes later

Whereas the one-mile race was small, disorganized and a flat-out effort for me, the 5K was very big, perfectly organized and a gentle jog.   I can’t recall ever running a 5K with this many people...they stretched out for 200m behind the start line. 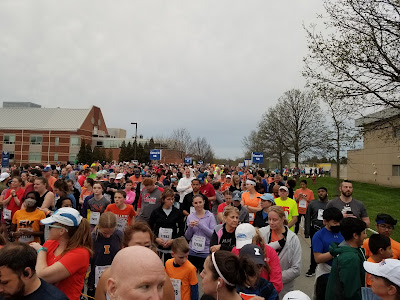 One group of intrepid local charity runners did the 5K with Sousaphones...note the bibs on the bell!! 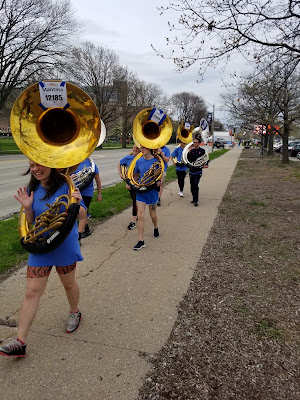 The sharp wind and low 50s temps made standing around in the grid quite chilly.    We started on time and warmed up.

I just jogged this one at a pace that felt comfortable.   It was a nice tour around the U of I campus and we finished at the 50 yard line of the venerable Memorial Stadium, one of the oldest stadii in the Big Ten.  Perhaps a little cheeky of me to wear a Purdue shirt at an opposing university but no one really seemed to notice or care. 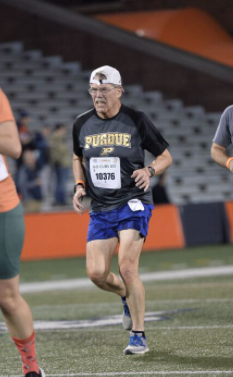 I actually ran hard at the end and the photos seemed to capture that a bit, albeit not very flatteringly.

It was very windy but the rain held off.   I headed to my motel and slept a bit.

Illinois Half Marathon, 7:30am, Saturday, April 30

My objective for the HM was to run it in 2:15 and enjoy it.   Walking into the Expo on Friday afternoon, I happened to meet a pair of pace group leaders, one of them leading the 2:15 group.   I decided to see if I could simply hang with that group and get it done.

Up early on race morning, I scored a primo parking spot, about as near as I could get to the finish line exit from the stadium...parking spot planning proved a major topic of thought all weekend, with two different finish line locations and three separate start lines and blocked streets abounding.

Weather remained chilly, windy, grey, overcast, threatening of rain.   We chatted in the start grid on the late, chilly spring...for an April 30th race, we all had hoped for better.    We started in waves and got going on time.

I fell in with the 2:15 group and it seemed comfortable early.   The course was quite serpentine, as the organizers had to get creative on how to snake a combined 10K and HM course all contained on or next to the U of I campus.   Thus, we had the wind in our face, then at our side, then at our back and then in our face again all morning.

Around mile 5 or so, I was dismayed to find hanging with the pace group became more difficult for me.  My breathing was more labored and the legs were heavy.   Was this yet another disappointment like I saw four weeks earlier in Carmel?   I was concerned.   After some debate, I decided to shift from a steady run with the pace group to the more familiar 6/1 run/walk, using the same pacing I used in Carmel which could lead to a 2:15 HM finish.

I reset my watch and lumbered on, discouraged. 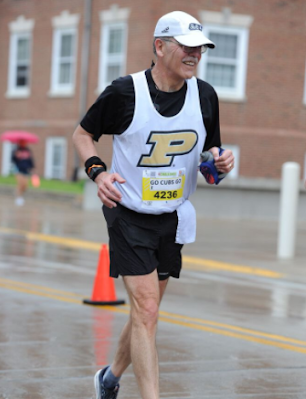 Some drizzle started, we took our first trip past the stadium to drop off the 10K runners, and we headed on a long, increasingly open trek through the prairie south of campus, home to many academic agricultural research projects, I’m sure.   The wide open farm ground was a jarring contrast to the academic, commercial and Oxfordesque old residential areas.

I was working the 6/1 and gradually felt my legs coming back.  Some volunteers passing out orange slices added some citrusy zest.   The local Corvette club had a dandy display of cars I’ll never be able to afford.  There was no shelter from the wind in these open areas, though.   The drizzle stopped but the sky was foreboding.   I chatted with folks a bit to pass the time...a first-time half marathoner was feeling encouraged by mile 9.   A fellow baseball fan and I discussed Albert Pujols’ return to the St Louis Cardinals.   We plodded north, finally heading back to campus.

Around mile 10.5, I flipped my Garmin screen to see my aggregate pace.   To my utter surprise, it was at 10:14/mile.  The pace for a 2:15 HM was 10:18/mile...and I was just a tad quicker!!   I was amazed...I didn’t feel like I was anywhere close to that pace, even though I had been trying to do just that all along, both with the pace team and with my own run/walk calculations.   Really?   Might I actually end up close to 2:15 after feeling so lousy about the entire deal?? 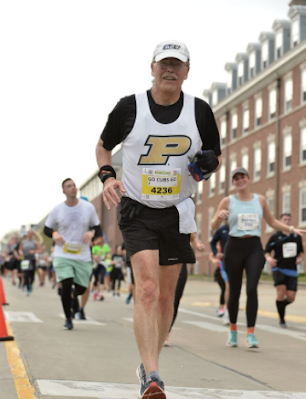 Many turns remained, as the course continued to feel like the waiting line to ride with Dumbo at Disney World.  Around mile 11, the rain started again in earnest.  The wind kept pounding.   I didn’t feel much better but my watch said I was still on pace.   Zigging and zagging, we eventually made our final left then right turns to head into the stadium and the 50 yard line.

Remembering my grimace at the 5K finish the night before, I decided to appear more positive in the free photos at the HM finish. 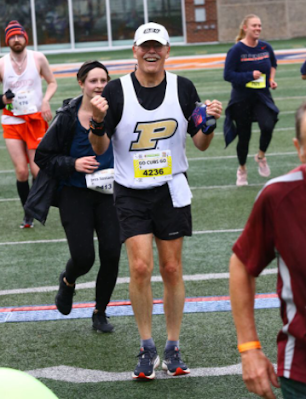 Over the line, a look at my watch and I was thrilled to have actually beat the 2:15 target. 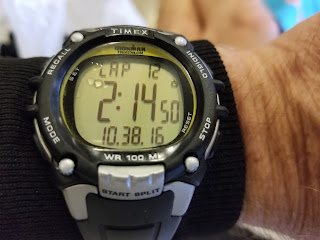 I found the 2:15 pacer who was still hanging out at the finish line.   We chatted and she said “Yeah, I was a little quick at the start” but she was happy I came in under my goal.   I had to have the photo...it’s nice to have my personal pacer, or so it appears. 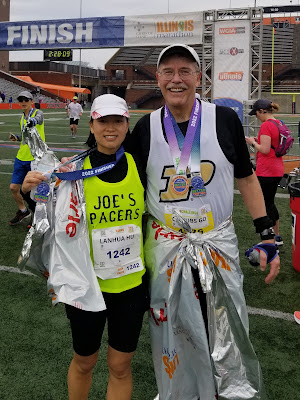 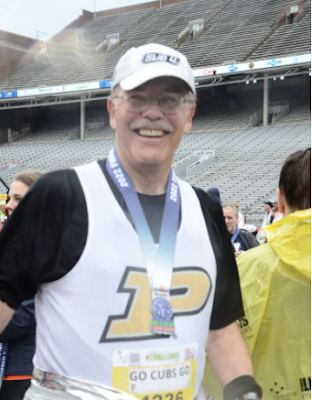 I quickly left the football field, knowing there was warm food, no rain, no wind and my drop bag waiting in the concourse.  I wasn’t disappointed. Chocolate milk, Doritos and a slice of pizza tasted great.   The dry shirt from my bag was even better. 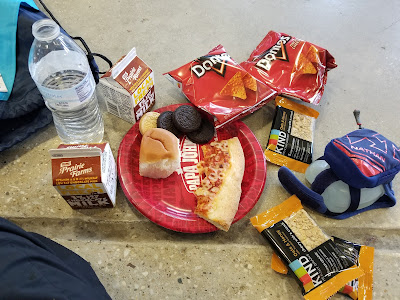 I made the short walk to my car and headed home.

Ultimately, the most instructive moment from the HM happened later when I got a close look at my official pace chart from the various timing mats around the course. 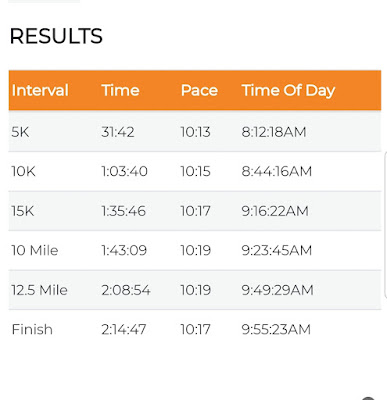 Had you shown this chart to me before the race, I would have taken it in a heartbeat.   Steady, consistent pace, all at the target pace.  Yet, this consistency was in marked contrast to how I felt along the way...it banged all over the place.

I was pleased with the three races in two days.   Each was useful and I always enjoy race day.   Moving on now to some summer ultras.