A fresh 1.5" of snow fell overnight, with light flurries still blowing when I stepped out the door at 5:40 this morning. On one of the streets, no vehicles had passed yet...mine were the first footprints.

On the return trip, some 25 minutes later, my footprints were still the only markings, though they had almost filled in completely from the wind.

It was a simple sight. It was a marvelously simple pleasure. To be out, early, in fresh snow and to be active. I reflected further on my own blessings. Of health, to be able to simple go out and run four miles without thinking too much about it. Of not worrying about where the next meal will come from, knowing I have a warm shower and a warm breakfast awaiting me. Of a wonderful wife and family to love me despite my odd inclination to run in cold weather. Of friends, employment, opportunity.

It was a neat moment, in the dark and the wind to see those filled in footprints. I hope you can reflect on your own blessings today.

The sunshine was invigorating. A bright blue sky stretched from horizon to horizon here on the flatlands. It was a great Saturday morning to get in a run. 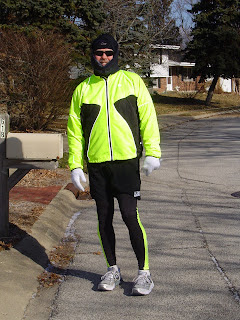 Of course, I saw all of this from the warmth of my house. I knew better. Clear blue sky in Indiana in January means bitter cold. The thermometer said 9. The wind chill was between 5 and 10 below. But I was antsy for a run, so out I went. With my temperature chart providing guidance on what to wear, I layered up and went out.

It actually was quite nice, once I got a couple of miles under my belt. The run was uneventful. And, I have to admit, part of the fun of running on a day like today is looking at the shocked faces of people in cars staring at me. With no touch of pain or discomfort in the right knee.

My wife also demonstrated that she truly loves me. I got home and asked her to come out and snap this photo. I was warm…she had been warm. She did it anyway. Thanks, hon.

Here's the entire family from last week's get together. 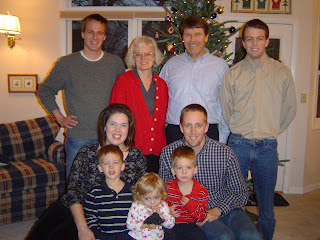 We are deeply blessed and are humbled to have our family together. Having David back in town is an awesome gift. Rejoice with us!

The Soldier Gets Home

After a long, difficult, 15-month deployment, our oldest son got back from Iraq on Wednesday morning. Words are totally inadequate to describe what Gretchen and I felt as we were 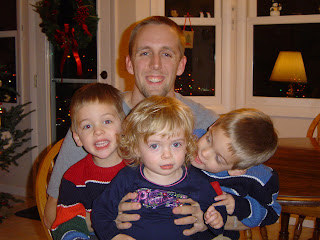 able to hug him again and welcome him home. To see him back with his wife and three kids is just amazing.

On Wednesday, we finally celebrated Christmas. Gretchen’s parents were able to join us, so we had four generations in the room with the appropriate wrapping paper flying and little kids being excited.

Also joining us for the week was our middle son, Nathan, who flew in from Portland for the reunion with his brother. Youngest son Matt is still home on Christmas break from college, so we had our entire family together again…an increasingly rare occurrence with grown kids.

Rejoice with us in this wonderful event. We're taking more family photos tomorrow, I’ll post them in the 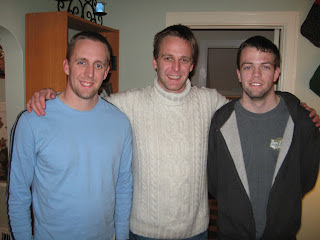 What you do when you're not running much

As I claw back to the surface of steady, 20+ mile running weeks, I have more time on my hands. Or, on my feet.

So, I’ve diddled with this blog. I’ve wanted to have a more interesting header for some time. Thanks to photos from Dee Dee and expert photo-editing by my sister Karen, I have it. Mind you, this is “art” as envisioned by an engineer; i.e. pretty clunky and very, very, linear. But, hey, there it is…the solitude and pleasure of running alone and the ultimate prize of finishing the race. Karen offered to edit out the clock on the finish photo. I wanted to leave it, as a reminder of plodding and the cruel but real fact some tasks just require you to slog through it and finish, no matter the time.

I’ve also added data from RunningAHEAD on the sidebar, posting my 5 most recent runs and on-going totals. For the voyeuristic amongst you, I have made my running log public. If complete boredom takes over, you can go see what odd comments I make about each run.

Core strength is a new item. Looking at my log, I realized it was mid-November when I added daily sit-ups and push-ups. Fascinatingly, I now look forward to them. Like many habits, it takes some time to get used to it…then the feelings follow. I’m up to 25 of each in the morning. Now, rather than just getting through them, I’m focusing on form. I’m trying to see how many perfect sit ups and pushups I can do in a set. I’ll get maybe one or two right now, each day. I gotta say, the abdomen and lower back feel a lot better.

I’ve also dusted off the weight bench in the basement and have added daily leg extensions to the regimen. I understand from a number of sources quad strength adds to proper alignment of the knee, diminishing the knee pain I’m trying to avoid in 2008.

Oh yeah, I’m also running a bit. Had a nice 3 miler yesterday, and plan to do 3 more this week and 6 next Saturday. The knee is feeling fine…I’m going to ease it back into service.
Then I had a wonderful surprise run this afternoon, Sunday. My youngest son, Matt, still home from college, is in ROTC. After getting home from church, I suggested we go for a run since it was nearly 60 degrees and he needed to keep in shape for Army PT purposes. He agreed and so out we went. I suggested he set the pace and, boy, did he. We ripped through the first mile at 7:56. He slowed a bit through the second mile, at 8:11, then a runny nose slowed him further to a 8:45 pace in the final mile. He still had enough moxie to kick the final 200m and leave me in the dust. Plus, I suspect, he enjoyed proving that 19 is a lot younger than 54, as if we needed proof. We had a great time, though, engendering some great conversation during and after the run. And, guess what?? Not a single quibble from the right knee. Priceless.
You never know what surprise awaits. Raising kids is an ultimate test of perseverance. And, sometimes, despite the difficulty, you get a glimpse of the finish line.

One of the fun things about running locally is our running club’s annual “Run in The New Year” or RITNY, race. RITNY got started in the early 80s as a midnight run on New Year’s Eve. It 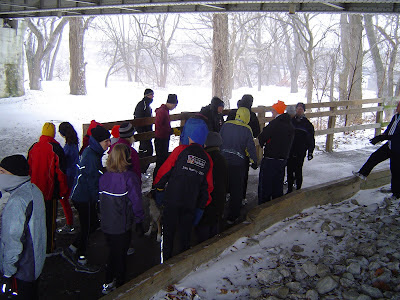 has continued, uninterrupted for over 25 years now, kind of an amazing feat for a small running club in a small city.

Somewhere along the line, sane thinkers shifted the run to New Years Day morning, with a breakfast afterwards. It’s a nice format and over 70 people came out today in snow, 25mph winds and a minus 4 wind chill to run. We have a two mile course that folks can run as much or as little as they’d like…it is billed as “less than a race, more than a training run.” The folks at the local hotel where we gathered and then ate looked at us like we were crazy. Then again, they decided we were all sober-crazy, much better than the drunk-crazy people they had seen last night! I enjoyed seeing lots of folks I know and making some new friends. 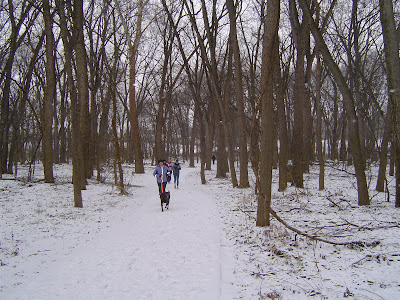 Looking ahead to the running year, 2008 starts, in many ways, like 2007 started. I’m injured and fuzzy as to goals.

I came to the reluctant diagnosis of “injury” last Saturday. My plan called for an easy 17 mile run. 5.5 miles into it, my right knee, the one giving me fits since Rocket City, packed up again. I walked home and decided to own up to the problem, after all 4 of the long-ish runs since the marathon have triggered the same pain. Reviewing my running log and the relevant literature, it seemed clear to me that this is a case of Chondromalacia a.k.a. “Runner’s Knee.” It is a general pain below the kneecap, exacerbated by use. Reading several sources suggested I probably injured it as part of the difficulty of finishing the Rocket City marathon. The pain is markedly different from the ITB pain I had a year ago.

Treatment is not complicated. Rest for a couple of weeks, then low mileage for another couple of weeks, followed by a gentle easing back to longer runs. Prevention centers on strengthening the quad muscle to provide better alignment of the kneecap. So, that’s the plan. I was happy two easy miles this morning went smoothly.

The immediate implication of the injury is no spring marathons. I had been planning on running in St Louis on April 6 and Traverse City, Michigan on May 24, but there is no way I can or should ramp up by then. Interestingly, my new global goal to “run the best race conditions allow” proved very helpful. Conditioning won’t be there; I can deal with it. I need to find a way to get healthy and stay that way. Two consecutive winters with injuries triggered by fall marathons has me thinking a lot.

As I erased five months of running plans from my calendar Saturday night, feeling a little blue, I came to a wonderful and encouraging realization. There are four, count ‘em, four half-marathons here in Indiana between late March and the end of May. I’ve run three of them before, the fourth is in its first year. It became evident running these four halves is quite a suitable and doable goal for the spring. You can see the race links and dates on the sidebar. There is also a 15km trail race in early March which has some appeal. So, for now, these become the targets.

I’m also paying attention to core strength. Sounds grand but just consists of 25 push ups and sit ups every morning. Astounding what that does for the abdomen, when you do it every day. I’ve also just added leg extensions on the weight bench for quad strength. And, to add something else new for fun, I’m trying out an on-line training log, RunningAHEAD. I’ve never done an on-line log before and this was free, simple, with some tools which may help me. Thanks to new blogging buddy Nick for the tip.