It's been quite a summer and early fall of running and training for fall marathons.  Mostly, lots of miles and more quick miles than I have done in the past.  My training record looks it.   I paste the screen shot from my on-line record on Running Ahead after today's run. 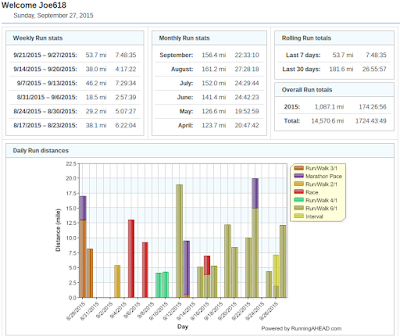 I've never had 181 miles in any 30 day period.  Ever.  September isn't over yet and it looks like I'll be over 160 miles for the calendar month.  The week and month totals say a lot.

No sense of any injuries.  To that, I credit the Run/Walk plan and the gradual build up.

What's it worth to do all these miles??  We'll soon find out, as I have three marathons, all in Indianapolis, over the next 6 weeks.  The first is this Saturday, October 3.  I plan to go out at my sub-4 marathon plan and see if I can hold it through 18 miles.

Two weeks later, I run the final ever Indianapolis Marathon.  That one will be a simple long run, celebrating the last hurrah for a great race in our state for the last 20 years.

Three weeks after that, November 7, is the target...the Monumental Marathon, where I'll go for a sub 4 hour 26.2.

The miles are there...now it's in the sequence to see if it will deliver.

Fun to know I'll be making all three trips with running buddy Jon.  We are now, officially, the "Miata Maniacs", but that's a story for another day. 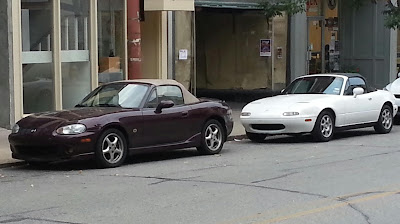 So, this afternoon, three professional sports teams I follow all played important games, simultaneously.  And the teams says something about me.
The Chicago Cubs were in Pittsburgh for a big game vs the Pirates.  Not a surprise there.
But, in the European Championship League (this is soccer), Manchester City hosted Italian powerhouse Juventus.  And, their rivals, Manchester United, traveled to Holland to play PSV Eindhoven. Yes, I really like English football/soccer.
Through the wonders of text alerts, I could follow all three games while at work.
And all three lost by one... Pirates over the Cubbies 5-4, Juventus topping Man City 2-1 and ManU upset by PSV by the same score.
Did anyone else follow these same three games today??
Yeah, it says something about me, but I'm not quite sure what.
Persevere.  Even when you lose by one.
.
Posted by Joe at 8:32 PM No comments:

Summary:  It was a great Labor Day weekend with two races; Saturday's Parlor City Trot Half Marathon and Monday's Blueberry Stomp 15K.  Both were even  better as they were road tips with local running pal Jon.  They set up well for fall races.

Jon and I have a number of Indiana running road trips planned for this fall...this weekend kicks it off.  Up at 4am, we were on the road at 4:45 for the 2+ hour drive to Bluffton, Indiana for this small race, the second time I've run it, the first for Jon.  We arrived a half hour before the gun and had more than enough time to get our bib, get ready, stretch and still stand around and talk.  At 7:30am, off we went with an unassuming start.

This fall's entire running plan is focused on going under 4 hours at the Monumental Marathon in Indy on November 7.  This weekend's task is to practice the exact pacing, hydration and fueling plan for that effort.  I needed to set this following my lousy hydration plan in the Wausau Marathon two weeks ago.  Thus, I changed, as follows.

Hydration:  The day before the race, I drank about 100oz of ice water at work plus more in the evening, to get all my desperate little cells as fluidized as possible.  Then, on race morning, I drank nothing at all before the gun.  I carried my own water in the race, with two 10oz bottles in my water belt.  I took a swig or two on most every walk break (more on that below). Both bottles were empty by mile 6.5, where I reloaded another 20oz at a water stop.  I finished those off by mile 12 but didn't worry about it for the final mile.  I felt fine all along.    Good, all around.

Fuel:  I made up an 8oz bottle of my home-brew energy gel and took a swig of that at every mile marker.  I noticed this really helped.  Not only did I not hydrate in Wausau, I also didn't fuel well either...this was better.

Pace:  I used a 4:30/:30 run/walk sequence from the beginning to the end.  I kept the run pace at 8:42 and my aggregate splits were mostly just under 9:00.  This five-minute cycle worked very well.

It was warm at the race site, upper 70s, and the humidity was near 100%, as we were largely in the woods and it had rained overnight.  I was drenched by mile 8. Yet, I felt good throughout, despite the heat and humidity.  If there was  low spot, it was  around mile 11 with a 9:17 mile.  But then I recovered and the last full mile was 8:25.  I was very pleased to see my watch with the unofficial time of 1:56:31 at the finish line.

Meanwhile, back at the ranch, I knew Jon was going hard for a PR and on track for it.  I had seen him along an out and back segment at mile 7.5 and he was close behind me.  I immediately headed back out on the course to see how he was doing.  In short order I saw him and we ran the final quarter mile together.  He was working so hard and, with wonderful and inspiring effort, earned a 9 minute PR.  I was very excited for him!  You can read his entire report here here. 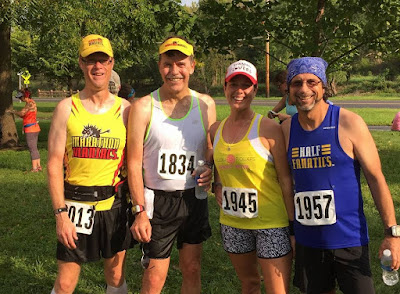 Immediately following the race, Jon and I enjoyed catching up in person with fellow Marathon Maniacs Jen and Stevie Ray, above.  It's always fun to see familiar faces and talk before and after the race as we did Saturday.

Jon and I headed back to the city gym the organizers provided with shower facilities post race.  After we cleaned up, Stevie walked in and said "Hey, Joe, you won an Age Group award!"  Hmmmm, that's unusual and a treat.  So, we looped back to the finish line to pick up my prize, below. 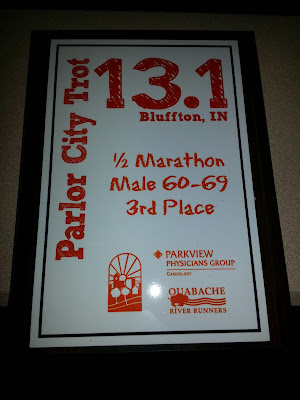 A rare occurrence!!  Nice to have this to hang on the wall.  And, after we got home, I looked at the on-line race results and discovered just WHY I got third in my AG...because there were only THREE in my AG!!!  Hey, I was both third and last!!  Hooray for bling!!   Overall, I was 54th of 78 finishers...a small field of really good runners indeed.

The key takeaway from Saturday's race is how deep I can carry this pace.  I felt better at the end here than I did at the half-way point of the Wausau Marathon two weeks ago.   I really think I could have easily carried that pace another 3 or 4 miles.  Could I have carried it to 19 or 20??  Will temps in the 40s help enough?  There are many more miles to cover this fall to discover.

Up at a leisurely 5:30am, we were on the road north to Plymouth, Indiana at 6:30.  This race is a hoot, as it takes place during a big Blueberry Festival Parade, which attracts tens of thousands, literally.  We arrived, scored a great parking spot, got our bibs and were easily set for the 9am gun.  Over 800 runners queued up for the 15K and 5K races, a far cry from the 120 or so with which we gathered on Saturday.  And, in the large group, Jon and I happened to meet Miss Blueberry Festival and she agreed to a photo, a rose among the thorns!! 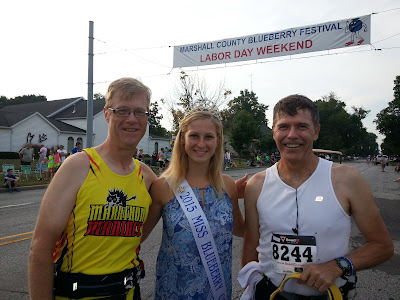 My objective for this 15K (a nice distance, seldom run) was to use my same pattern I'll use in November but to pick up the pace, running hard on legs still tired from a half marathon two days previous.  This worked well for the first two miles, with splits of 8:21 and 8:29.  Then the course pivoted to a long set of rolling hills which, coupled with temperatures moving into the upper 70s with high humidity, took their toll on me.  Most mile splits on the hills were in the 9:00 to 9:11 range.  The hydration and fueling plan, discussed above in the half marathon description, did work well though and I was encouraged in this pattern for the fall's marathons.

On the return downtown, the most fun part of this race emerged, as we ran in the opposite direction of the huge Blueberry Festival parade.  The energy clearly buoyed me, as the 9th full mile took only 8:27 and the final partial mile was at a 8:34/mile pace.

We had good racing on a very hot, humid weekend.  It was even better to have substantial, extended conversations with Jon as we spent nearly 8 hours together in his nifty Miata convertible. 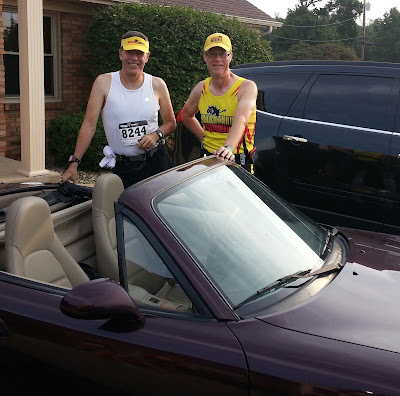 Jon's a terrific conversationalist which made for enjoyable travel.  Several more await during the fall.  I'm looking forward to them.

Persevere.  And have a terrific fall.

Just give it away

Several conversations over the past weeks have bluntly opened my eyes to the sheer glut of stuff most of us have.  Why not just give some of it away?  Why buy something new when something used can do?  Why keep that old shirt you haven't worn in two years?
I complicate things so often for myself; thus, I need to be deliberate in making things simpler.  And nothing simplifies like getting rid of something.  Not a strength for me.
Persevere.
.
Posted by Joe at 5:46 PM No comments: