"If you make the pond small enough, any of you can be a big fish."
Kenneth R. Hutton, my legendary High School Math Teacher
This has never happened. It will likely never happen again. But on Saturday, it did happen.

I ran a race and I was the first one across the finish line.

Now, I really didn’t “win” the race, but I was the first one across the finish line. It is hilarious…here’s the story.

My training plan this summer is aimed at getting solid miles underfoot in preparation for three and possibly four fall marathons. A recurring three-week weekend workouts cycle gets this done. Week 1 goes 20-22 miles, Week 2 goes 15ish miles and Week 3 is speed work. This weekend was the so-called “speed week”. I had planned to simply do 5x1 mile repeats on Saturday. But a few days ago, I saw a flier for a small 5K race alongside the famous Wabash River which bisects our fair city. It appeared to be a simple, no-frills run with a small donation to riverfront beautification. All of this was five minutes from our house. So I modified the plan. I would go early, run some mile repeats along the river and then do the 5K with a moderate effort.

Saturday morning dawned warm and humid. I got to the trail in time but the 3x1 mile repeats I planned didn’t go all that well. Umpiring multiple baseball games this week, coupled with a bad calf cramp at about 3am Saturday morning led to some lumpy legs and a struggle to do miles much quicker than 8:25. But, it was OK and I was done in time to walk over to the appointed meeting spot to sign in and start the race.

It turned out the Wabash Riverfest 5K was organized by a few employees of a edgy women’s hair salon positioned near the Purdue campus. It also became quickly apparent as the small group of about 30 runners gathered that most participants were employees or customers of this salon. The Race Director who was also a Hair Stylist and also a Body Pump Instructor gave us some quick instructions on the route. She waved her hands generally in the direction we were to go and assured us she had personally used sidewalk just before race time to direct us where to go. We weren’t all that sure but, hey, you can always follow someone in front of you, right?? She told us to get ready for the start.

The RD/HS/BPI had drawn a simple chalk line with the word “start” on the sidewalk in front of the salon. It was obvious, yet no one really moved TO the start line. Instead, the group gathered in a half-circle at a respectful distance from the start line. It reminded me of observers of a police crime scene with chalk marks showing where the bullet casings ended up. No one wanted to get too close. A fellow stylist stood then in front of the line and, rather unceremoniously said “Go!”.

And no one moved!! Everyone just stood there!! It was hilarious!!

After a moment, I said to myself, “Shoot, if you guys aren’t going to run, I will!” and I took off. Apparently that got the race going.

And, amazingly, I found myself leading a race. It was the weirdest feeling ever, one I’ve never experienced. I zipped up the sidewalk past the store, looked for chalk marks, made a sharp left and headed for the bridge to take us over the Wabash River. And no one caught up with me. I was actually leading a race. No one was in front of me. Mind you, no police escort in this little race either. But, still, there was no one to follow. It was a hoot.

We got across the bridge and headed North on a paved trail along the east bank of the river. About a half mile into the race, a guy eased up beside me, we chuckled about the start and he moved on ahead. A minute or so later, a lady pulled alongside mentioned we had seen each other a couple weeks ago during a long Saturday run, chatted briefly about marathons and then she pulled ahead. Another lady, less talkative, then passed me and off we moved. I was in fourth and kind of amazed at how this was developing.

And then we got into the mud. Left from recent river flooding, we had to pick our way along the trail for 50m or so. Now, what was it the RD/HS/BPI told us about mud at the start? That the mud was not the way we were to go? I couldn’t quite remember but I started to wonder if we had missed a chalk mark.

When we crossed under a second bridge, I realized we had made a mistake. We were supposed to be ON this bridge, crossing back over the Wabash, not UNDER the bridge continuing along the Wabash. I had to make a quick decision. I stopped and turned around. I yelled at the three folks in front of me but they couldn’t hear. I ran back and then, since I’ve run this particular route a few times over the years, I realized where we had gone wrong. I worked my way back up to the on-ramp to the bridge and there stumbled into the rest of the field…I was now behind about 15 people. My competitive juices started to kick in.

I was trying to run at a steady, sustainable pace at this point and tried to keep this up. Amazingly, though, this level of effort was enough to pass these people as we got on the bridge and then I pulled even with the RD/HS/BPI who was also running the race. I mentioned to her that three folks in front of me had missed the turn, I had fallen behind and I didn’t know if the others knew where they were with respect to the chalk-marked course. She shrugged, not knowing really what to do. Then she asked me if I knew the rest of the route. I said I did and she said, “Good, because you are in the lead!”

And indeed I was. A mile and a half into a 5K, I was the race leader again. We crossed the bridge and curled back under the it, now back on the west side of the Wabash and I just started laughing. How ridiculous! That I would be “leading” a race!! But I was!! It was a hoot!! And I realized this could likely be a once-in-a-lifetime experience and I had best enjoy it AND keep running hard!! Who could know what else might happen?

Well, the rest of the race went well. I had no one in front of me…I carefully followed the remaining chalk markings on the trails, streets and sidewalks. The course took us past the start point to a turn-around making a .4 mile out and back to end the course. Gee, an out and back. I’m so used to seeing all the leaders of the race on an out and back section…what would it be like to see “followers”? I had no idea. But it was sure fun to make the turn and enjoy smiles and a few “thumbs up” from some of folks closest behind me.

After the turn, I was flagging a bit in the legs but knew if I could hang on until my Garmin told me I had a half mile to go, I could open it up and be fine. That point came and I picked it up. This'll never happen again, so let’s not waste it, right?

I got to the final 100m of the course, could see a small set of balloons at the finish line but no people. That’s fine, I have my watch. I crossed the finish line, hit my Garmin and then heard a lady shriek. She was in charge of the finish and photos thereof but had no idea people were actually finishing already!!! So, she grabbed me, asked if I would “pretend” to cross the finish line again so she could get a photo!! We had some fun but I suspect it was a pretty lame photograph.

The epic event completed, I hung around for a while in my dripping-wet shirt and eventually got to speak with each of the three folks who were in front of me at the ill-fated course mix up. They each were gracious towards the organizers, noting it was hardly the Olympic Trials. It actually was fine, as the organizers had planned no prizes for winners anyway, only some door prizes available to any entrant. Nope, didn't win one...I had my "prize" already!!

The final numbers were encouraging. My Garmin had my mile splits as 7:51, 7:30, 7:49 and the last tenth in 0:48, a 7:26 pace. Given the sluggishness of my earlier mile repeats, these are kind of amazing to me. I would have been pleased with those times on a very warm, very humid day even without the fun of the way this worked out.

I can't quit laughing at the events which allowed a lumbering old guy like me to cross the finish line first in a 5K. I recalled the words above from my HS math teacher. This was, indeed, a very small pond and three of the fast fish swam up the wrong creek. It was interesting, though, to feel, just once, what it was like to lead at the start and then the entire last half of a race. In one sense, it was like dunking on an 8’ basketball goal. Not reality, but gives you a glimpse of it. This “feel” to lead a race was both exhilarating and disorienting, all at the same time. Much as I felt out of place hanging out at the edgy women’s hair salon, I was equally out of place in the front of a race. Yet, perhaps, just a little, it’s good to experience these things.

A fun day. Laugh with me. And persevere…you might find yourself out front someday.

As long-time running pal Michelle recently reported, sending a son off to military service is quite a parental moment.

Thursday, our youngest son Matt headed east, where he begins his Army active duty service next Wednesday at Ft. Lee, Virginia. It was time. And it was also a poignant moment, to give him a hug and see him drive off. 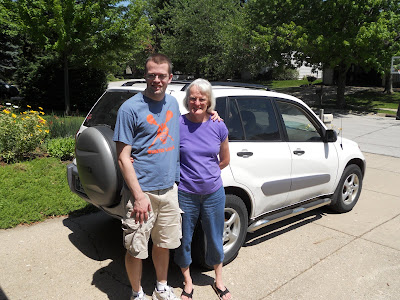 We felt no different than any parent, in any generation, has felt in seeing offspring head out to serve. If I'm not willing to let my kid serve, why should I expect every other parent to have his/her kid serve? It's a key question to me, as a parent, as a citizen. 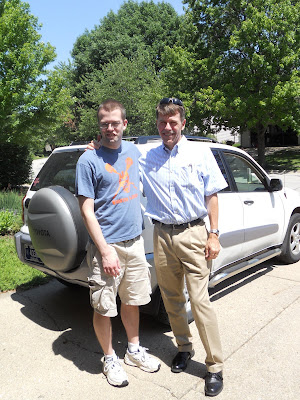 So, off he went. A moment of joy and pride and realization that all three of our sons are now "launched".