Thanksgiving happened at our house this year. Wonderfully, we had our entire family together. Matt is home from college, reading more Shakespere and catching up on sleep. Nathan is in from Portland, enjoying his hometown. He's become quite the accomplished cook; here are some action photos of Nathan making an apple pie for the family celebration.

Our three grandkids are a hoot. They are at such fun ages, with the twins almost 5 and Berneice now 2 1/2. 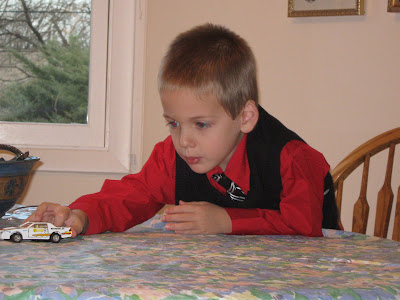 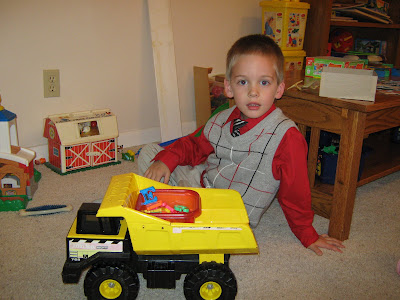 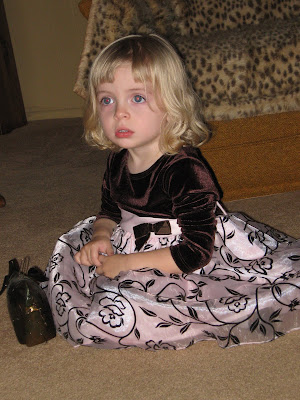 With Gretchen's folks in attendance, we had the unique privilege of four generations around the table. This is also the first Thanksgiving in five years that David has been with us. As we saw many tributes to the troops in Iraq, Afghanistan and around the world today, we were both grateful that he is now home and identified with the very real ache of those families with soldiers far away. 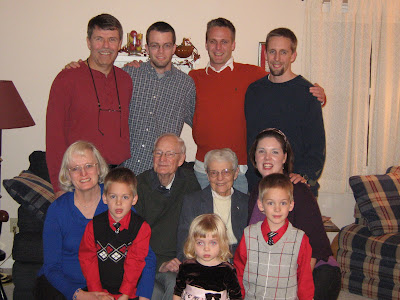 
We have much to be thankful for. Not the least of which is this wonderful, extended running community. I hope you all had a wonderful holiday.

And keep on persevering.
Posted by Joe at 2:37 PM 8 comments:

Many thanks for the many comments to my last post about trying to keep the same model of shoes. I see I'm not the only one who has struggled with this model switch. I've tracked down one pair already and have a line on a second. If I can get the second, I should be set through the spring marathon season. My wife is a wonderfully patient woman, as she hears such prattle and watches shoes stack up around the house. Thank you dear.

My knees/ITBs settled down nicely in short runs during the week in proper shoes. Today's schedule, two weeks out from the Memphis Marathon, called for a mere 8 miler but that sure felt wimpy. I went out thinking I'd do 10 and then pushed it to 12 and then, hey, I just kept going a while longer.

I decided to employ the taper principle of decreasing mileage but increasing the intensity. For me, that means going from my usual 5/1 run/walk ratio to a 7/1. Plus I pushed the pace of my run segments about 30 sec/mile quicker than I plan to do in Memphis (where I'll do a 3/1).

And, man, did it feel good. I felt like I was pushing it but yet it was maintainable. I didn't have a single whimper from the knees, hammies, ITBs or ankles. I felt more ready than I have for a while to take on 26.2.

I'm starting to eye the weather in Memphis for December 6. It typically runs about 12 degrees warmer than it is here in N Central Indiana. If that holds, we could have a dandy day to run. But, in any event, I'll seek to "run the best race conditions allow."

Happy Thanksgiving to you all.
Posted by Joe at 7:31 PM 5 comments:

What to do with the shoe

The long run three weeks ahead of a marathon is intended, among other things, as a final shake down for race day. Yesterday’s long run (intended to be 28 miles) fit that description but not all as I anticipated.

The good news was I did a final, satisfactory test of Salt Stick tablets. I popped one at the top of each hour. They sat just fine on my stomach and I had no cramping, wooziness or tingles in my feet as I do when I start to lose electrolyte balance. They will be quite simple to haul along on race day. I also reaffirmed my geeky practice of labeling Gu packs, mistake-proofing the time to eat each one. 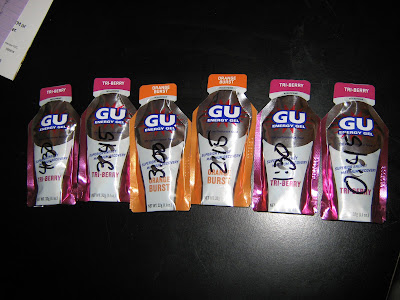 I also had two cool “unexpected” fun parts to the run. The first was an active screech owl prowling one of the woods I run through. Wow, what a sight and sound. The second was seeing fast runners. The NCAA Regional Cross Country championships were going on at 11am Saturday at the Purdue Cross Country course, right next to the trail I run on. The timing was such that women’s teams from Indiana, Miami (OH), Ohio State, Purdue and Wisconsin were warming up on the trail just as I came through. What a contrast…these young, tiny, graceful, fluid college runners next to the big, lumbering 55 year-old slow guy. Ah, but we were all running and that was cool.

But the big news of the run is about shoes.

Nearly two years ago, I came to grips with my floppy, overpronating feet and shifted my shoe to the huge, clunky and very effective Brooks Beast. After moving to that shoe in February, 2007, I’ve had virtually no problems with my knees. I’ve gone through five pairs and just recently received my sixth pair.

And thus the problem.

Pair #6 was the “new model” of the Beast. Same general look but when I first put them on, I knew they were different. The sole was different, the posts were different and in my early short runs in the new shoes I just didn’t feel the same stiffness. The first five pairs worked wonderfully (and hard) to keep my 195 pound frame from inwardly rolling my feet on every step. They kept my IT band lined up and happy.

Saturday’s long run was the first lengthy outing in pair #6. The first ten miles went fine but as I headed out on the (intended) loop around Purdue, I noticed a twinge in my right knee. Will it go away, as it often does after a few run/walk cycles? It didn’t. It gradually got worse. At mile 17, I realized it wasn’t going to get better. So I shortened the course, heading back home. Around mile 19, I throttled the cycle from 2/1 to 1/1 and held that all the way home. But the left knee now hurt and continued to hurt all day. As I write this on Sunday, they feel better, but I won’t know for sure until I head out on Tuesday to run again.

In the short term, I’m OK on shoes through the Memphis Marathon on Dec 6. This due to a nice bit of advice from David Haywood as we sat in a hotel lobby the night before the Rocket City Marathon a year ago. David described for me his method of alternating shoes, always having a higher mileage shoe and a newer pair on hand at all times. I started doing that early this year and, as a result, I have my pair #5 of “good” Beasts which will serve me well through most of December. Luckily, on Sunday afternoon, I did a quick tour of the local sporting goods stores and found ONE PAIR of the old model at one store in my size. And on discount, as they wanted to move them out. So, I’m set through March 2009 or so.

But what to do beyond that?? I’m thinking I need to find out what other really good stability shoes are out there and then get somewhere to give them a good test run. I’m just a long way from a good running store, so “shopping” is a hassle. I recall from my trip to the Naperville Running Company in 2007 there was a pair of Asics that were very close to the Beast. I’ll have to check that out.

And I welcome advice from any of you.

In the overall scheme of things, this is a minor blip. If I was talking to a guy who just lost his job in the recession or was looking down the barrel at foreclosure or had a major health problem, I’d feel pretty sheepish carrying on about the subtleties of shoe design. So take this bit of chatting for what it is…just some thinking out loud to folks who can understand the criticality of shoes for injury prevention. The fact that I can go out and run 20 miles, even in bad shoes, is a huge gift. And it is those simple gifts that sustain us.

Persevere. With or without stability shoes.
Posted by Joe at 3:12 PM 11 comments:

As I walked in the door Sunday afternoon from a run in 36F drizzle and wind, I laughed. My wife, who is used to such odd behavior, waited for the punch line. "You know," I quipped "most people wouldn't believe you could actually be comfortable when running in such weather." She's heard this before and gave me the benefit of the doubt.

The weather was a key thing this weekend, as the first really lousy winter weather rolled through. We had spent the weekend in Chicago, visiting son Matt who is now a sophomore at Wheaton Colleage for Parent's Weekend. It was great to see Matt in his element. He showed us much of the campus, many classrooms and the ROTC facility. We took a bunch of his buddies from the dorm out to dinner on Friday. As Matt wryly observed "Dad, no college kid ever turns down free pizza." Yeah, that has never changed.

I must aplogize to Waddler, as the trip put me in her backyard, yet I didn't call. I simply didn't have any idea what my schedule would be and, as it turns out, the weather was pretty nasty. Perhaps another time we'll connect and run the DuPage trail system.

It was great to see Matt. Having just turned 20, he's rapidly turning into a confident young man. Hard to believe our youngest is at this stage of life, yet it is very gratifying. And, on the Veteran's Day, I'm proud to have a fine young man like this preparing to take a leadership role in the Army. 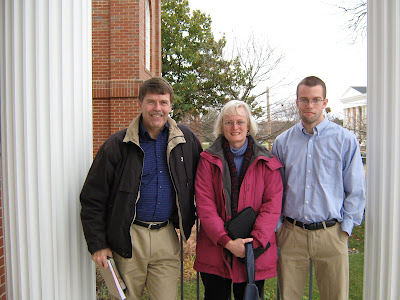 Not much to report on running so I won't bother. A bad head cold knocked out one workout this week. Hope to be back on track this week...five weeks to go to Memphis.

And here's the view down my street on this beautiful fall afternoon. Much to be grateful for. 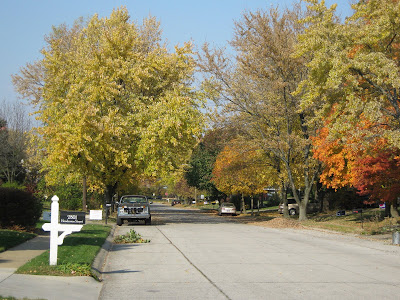