Summary:
In this, my fourth consecutive year of running The HUFF 50K Trail Run on December 20, I managed to set a 50K PR by 9 minutes.  It was both fascinating and difficult...like you would expect anything different in a run this long??


Details:
The HUFF holds a special place in my running history.  It was 10 years ago, on December 16, 2004, that I first participated, running a single 10 mile loop.  Until that day, I had never run trails at all.  It's funny to read now my race report of that day.  Dan Quayle, where are you now??

I've written about all three prior HUFFs since the organizers had to move it to its current location at Chain O' Lakes State Park.  Weather conditions in late December in Indiana give each year its own character .

2011:  The Deep Water Year.  The most philosophical I've ever been on my blog.  The lessons of that wet, cold, muddy day still hold, remarkably.  link

This year, the race was before Christmas and the weather afforded us the most runnable track of the four years at Chain O' Lakes.  But I'm slightly ahead of myself.

By experience, I knew I'd need to put screws in my shoes to have traction on cold, frozen trail.  So, a few nights before the race, I pulled my least-old running shoes and added eight #6, hex head, 3/8" self-tapping sheet metal screws to each shoe, six on the forefoot and two at the heel.  Total cost of 32 cents and I had traction.  They worked great! 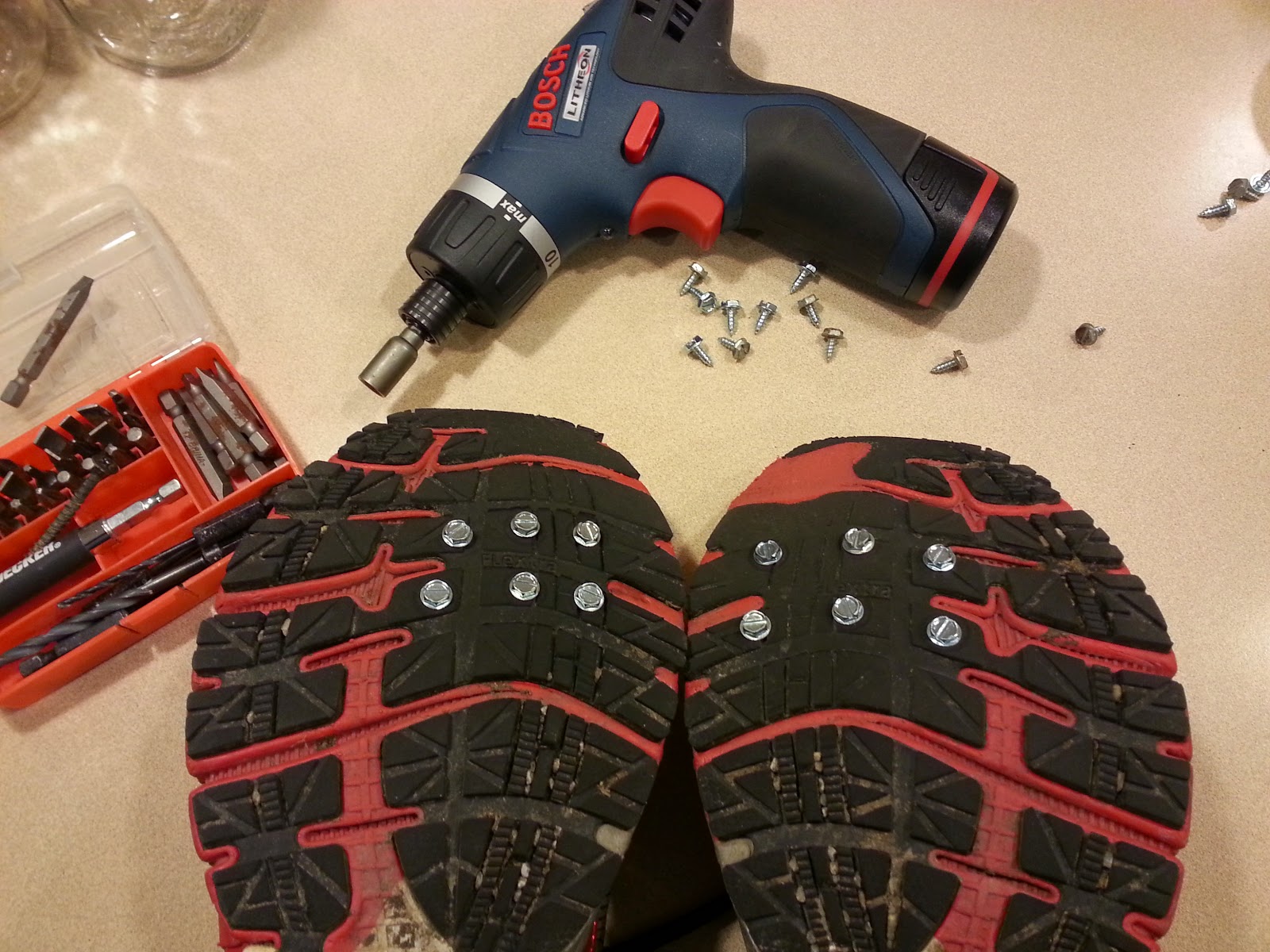 After a very hectic Friday at work, I drove the 3 hours to Columbia City, a few miles south of the park and had a not-carbo-loaded spinach salad for dinner: 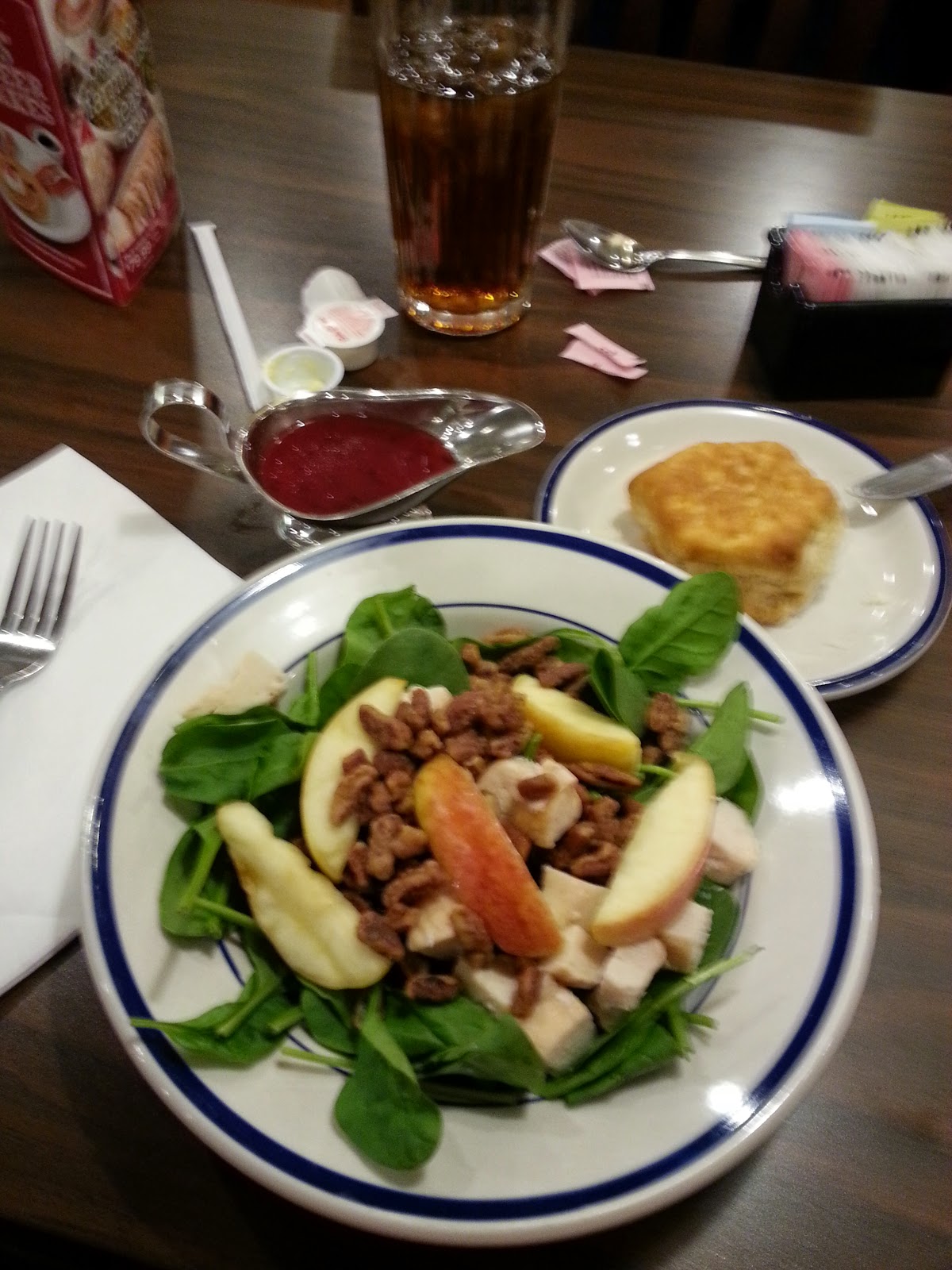 I then stayed at a perfectly fine motel in Columbia City and, even though its grammar wasn't perfect, the rooms were fine. 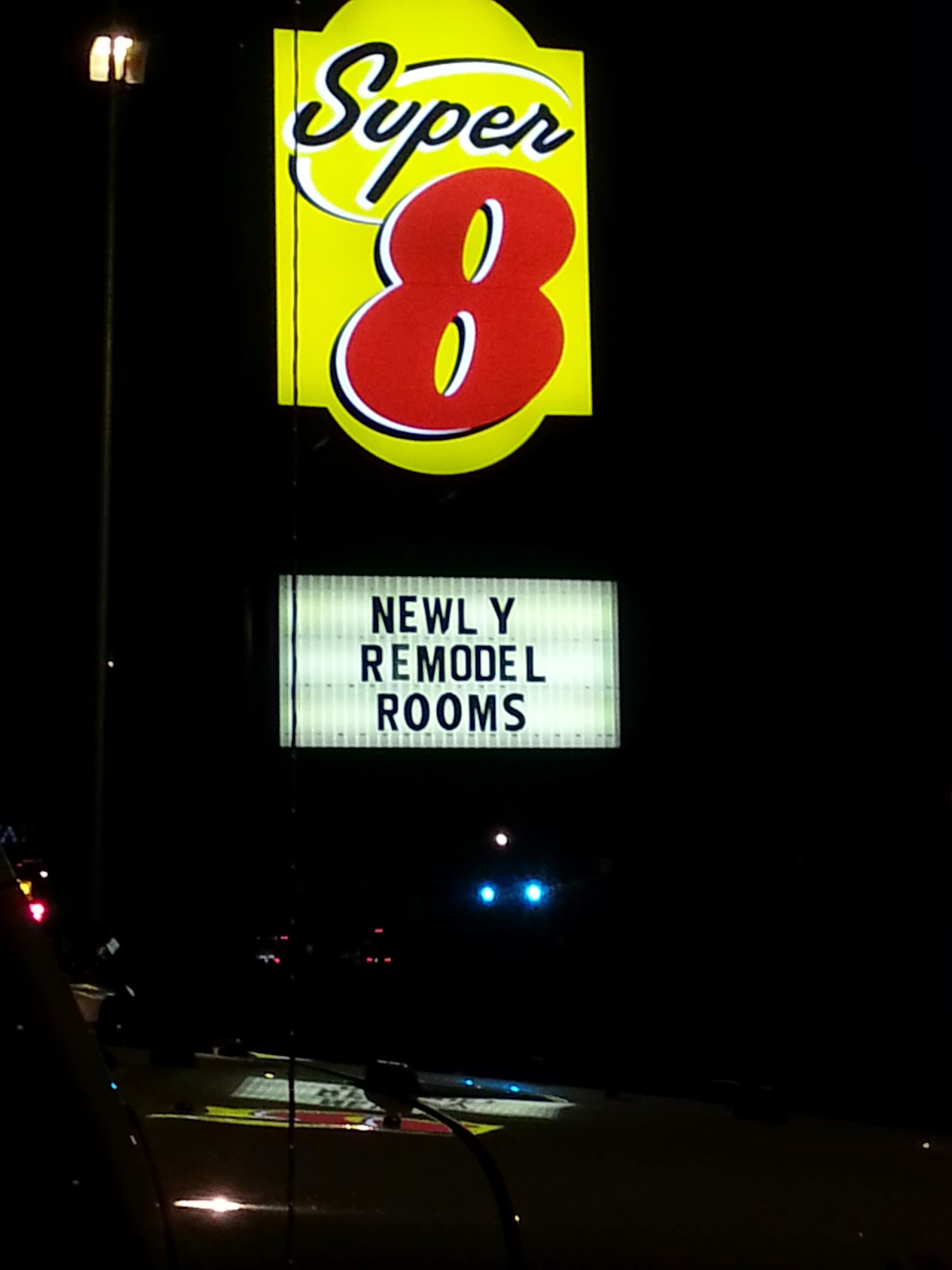 Turned out there were a lot of fellow HUFF runners staying here and I had some nice chats before getting to bed early.

Up before 5am on race morning, I was in the park and had a prime parking spot by 6:05am.  I appreciate races with race day packet pick up and that all worked fine.  I had time to grab a nap and was easily able to be ready for the start.

There were quite a few Marathon Maniacs running and we managed to snag a group photo, thanks to Jen Savage's skill in herding cats. 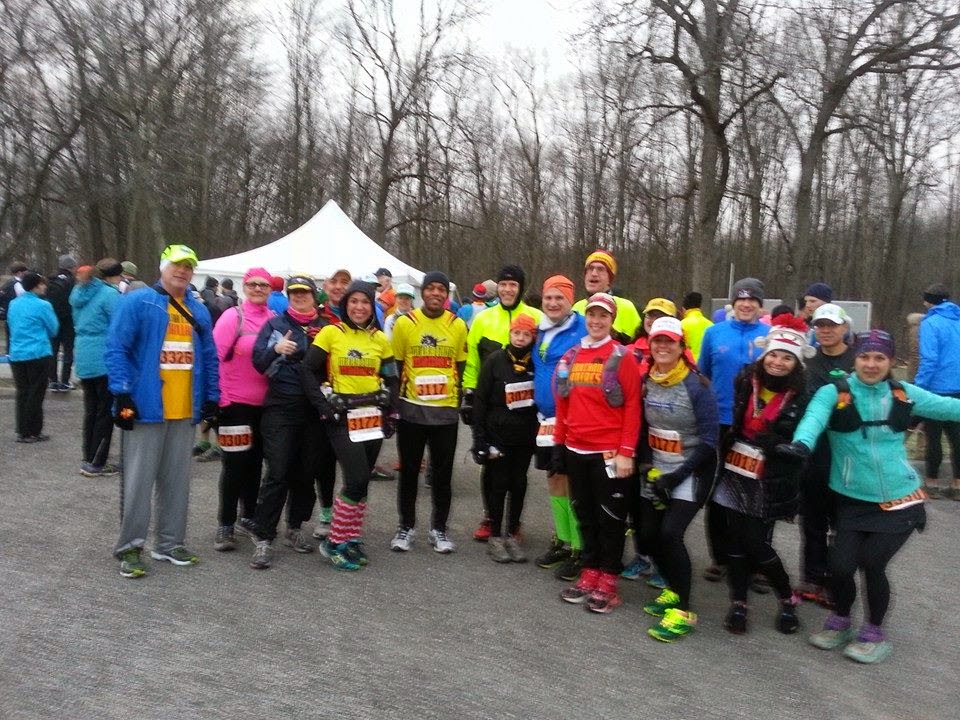 And, though a few minutes late, we got started at about 8:30am.  This race has such a long tradition, it enjoys wide appeal.  Thus, it is one of the bigger trail ultras in the Midwest...you can see the start pack size here. 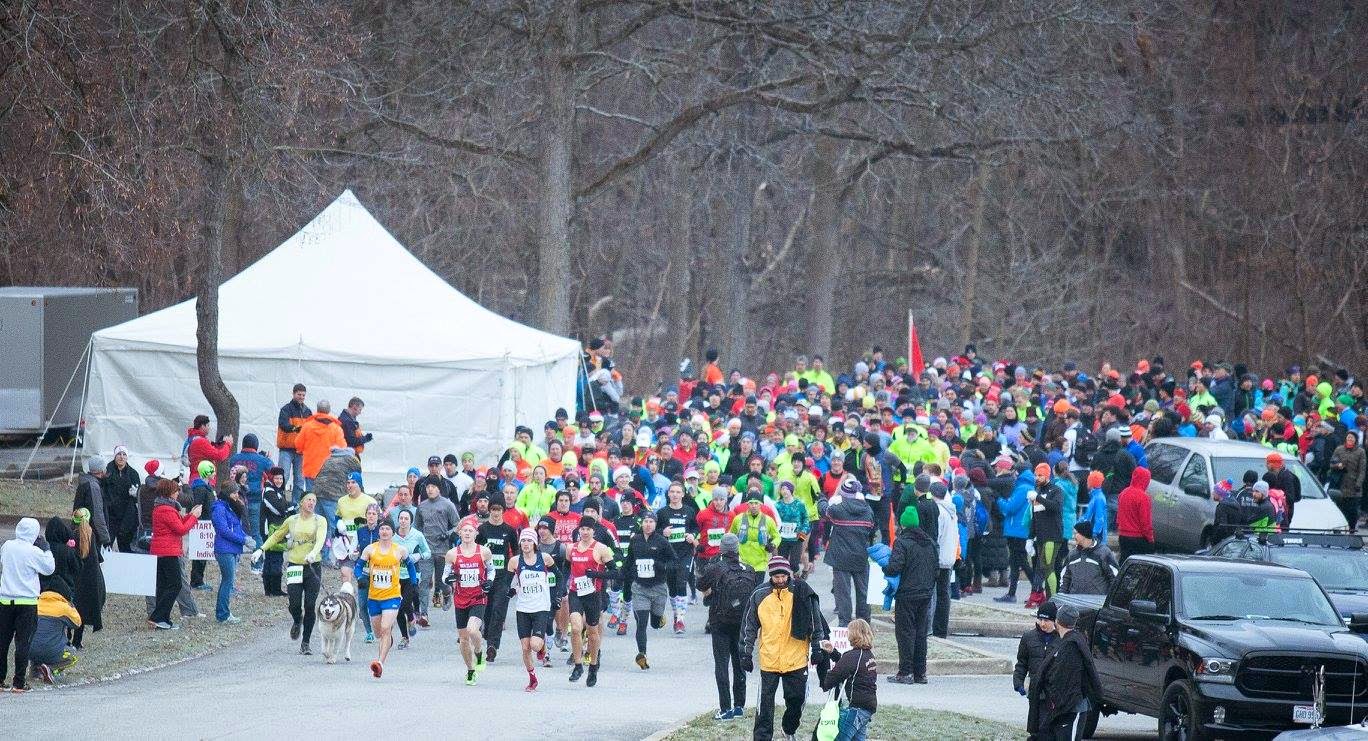 And from the start, we headed into the woods. 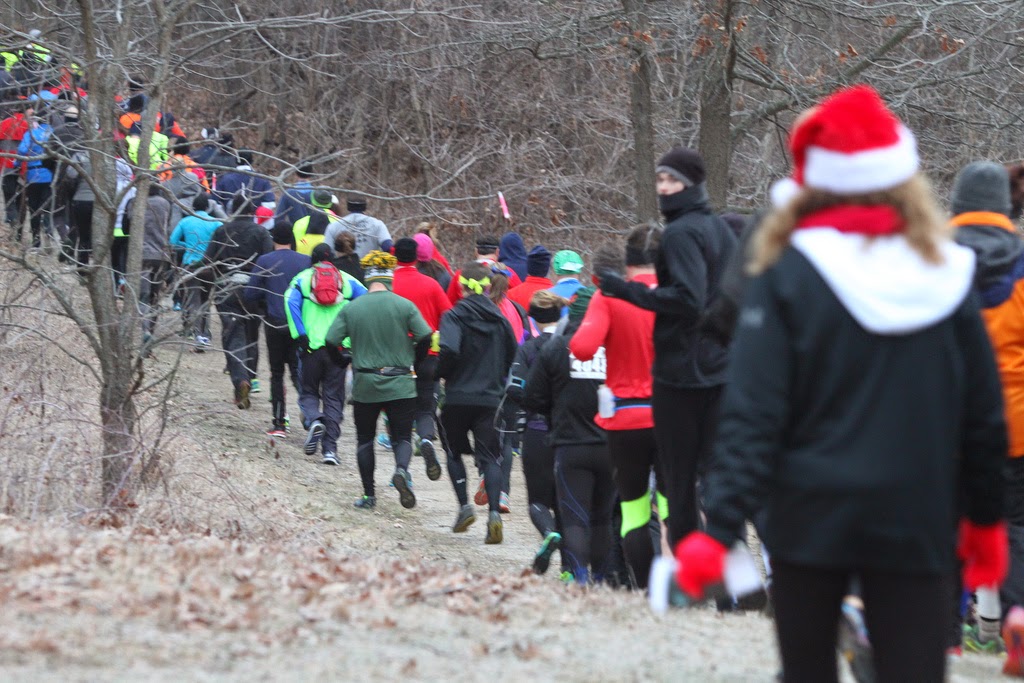 The 50K course is a 15.5 mile loop which we ran twice.  Having run that loop eight times now, I'm finally getting to the point I know where I am!!  The interesting part of the course is that the perimeter portions are gently rolling while the interior portions have lots of steep ups and downs as they work over and along the hog-back ridges which make up the geology of the lakes chained together in the aptly named state park.

The best tour of the course popped up a few days ago from some guys who carried a GoPro camera with them and then edited it to a very comfortable 4+ minutes.  Here's the link:  HUFF 50K Video .   This captures well what the trail was like.  Enjoy the fiddle background music!! 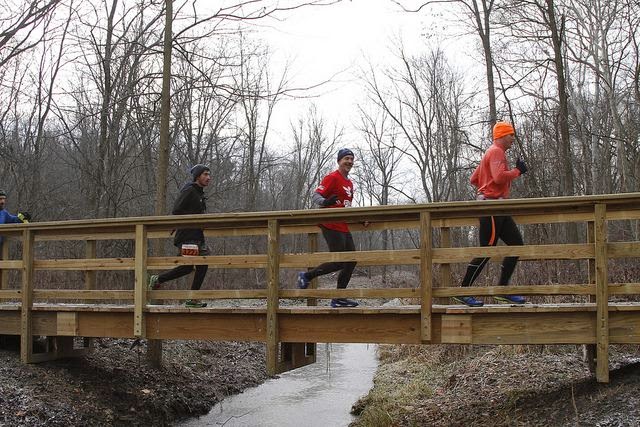 I found the trails very runnable this year.  The temps were in the low 20s through most of the race, leaving the trails frozen and solid.  We've had no snow yet either, so it was open and firm. 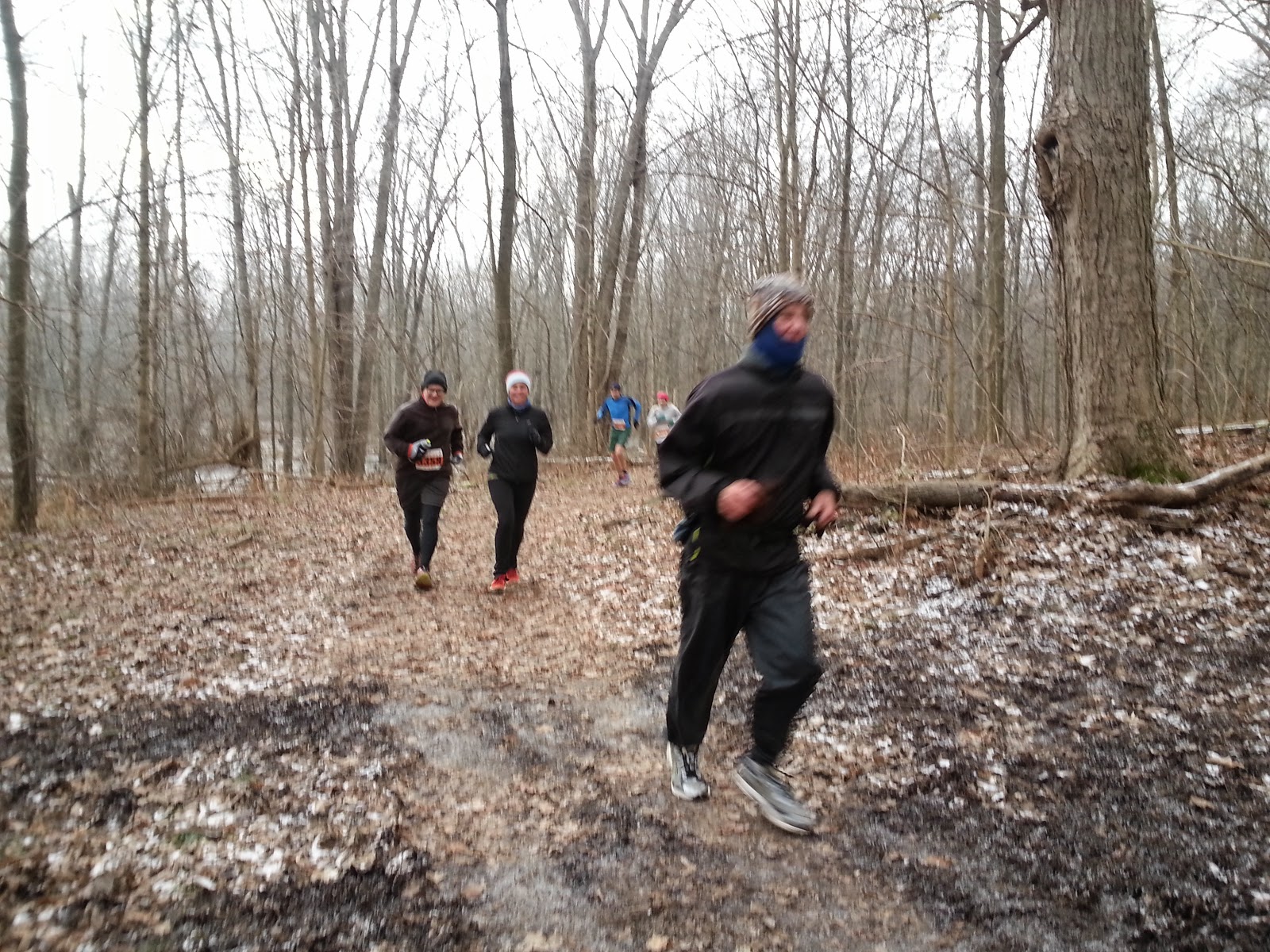 I approached the HUFF as a long training run, since it was not a goal race for me.  I opened using a run/walk ratio of  run 6 minutes, walk 1 minute and tried to simply run comfortably.  And comfortable it was.  The first lap went very well and I crossed the start finish line at exactly 3 hours, the best I'd ever done. 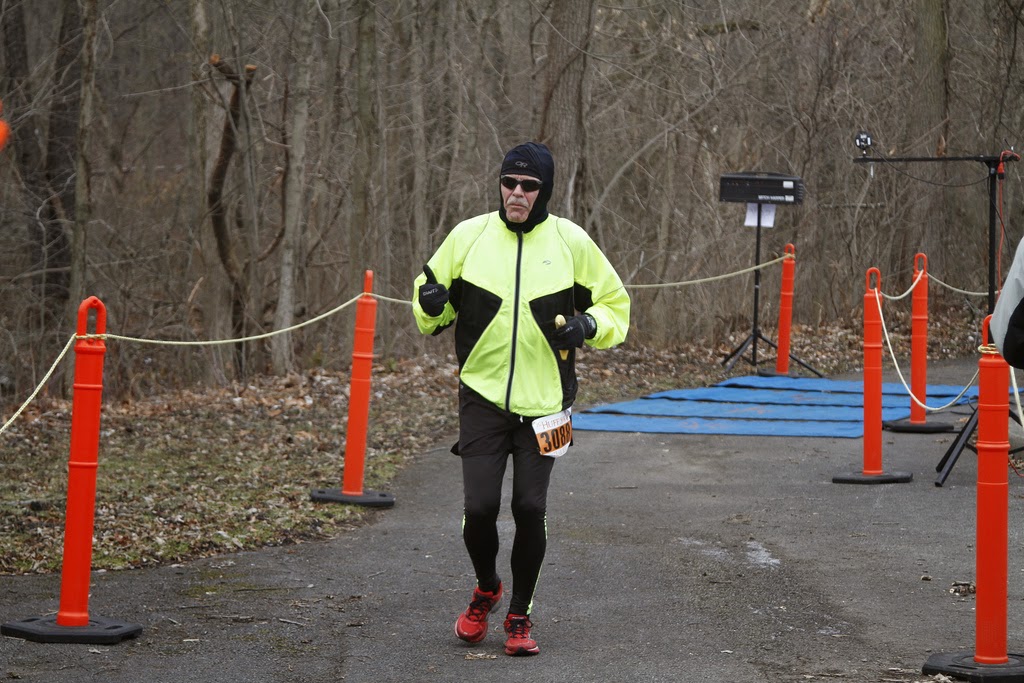 I'm not sure why I look so dour here but I do.  I have a banana in hand and was feeling good but I'm not a poster child for trail running in this action pic.

With the field fully spread out, the running was wonderful.  You can tell here just how nice the trails were for this race. 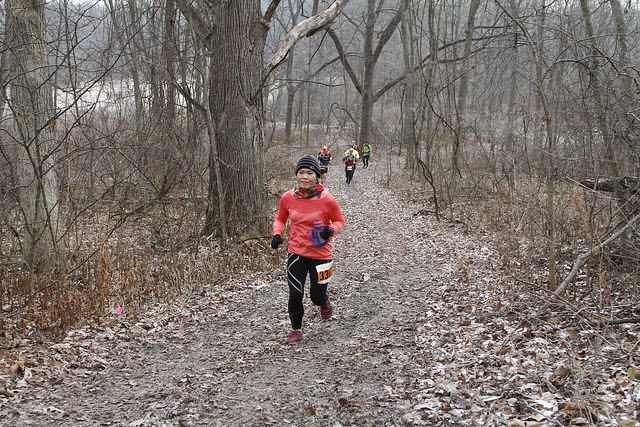 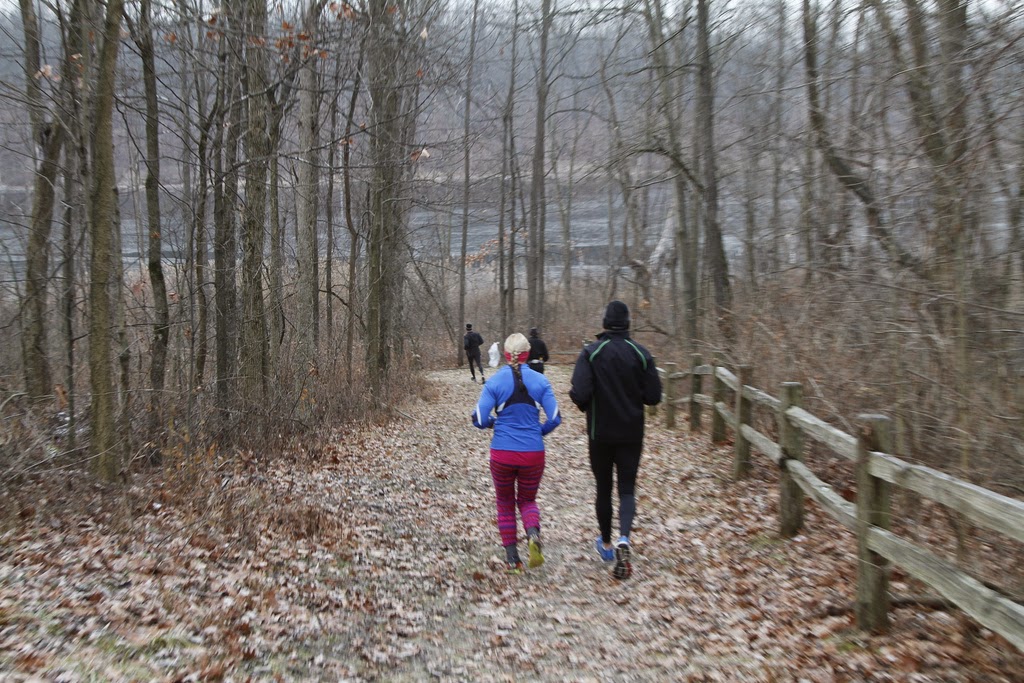 Interestingly, though, distance races are fair but demanding taskmasters.  While I had been careful to hydrate well, carrying my own water, I had deliberately not eaten much at the aid stations, taking just a few pretzels or corn chips at each.  Well, as mile 20 approached, I could feel the "Wall" hitting...just as I've seen it at other times when I was too casual about race preparation.   Within a mile, my legs got heavy and the energy was dissipating.

Realizing this was not a target race, I reset my run/walk ratio to 3/1 and re-calibrated my expectations for the remainder of the race.  But it just hurt from miles 20 to 23 and I was reduced to simply grinding it out.

A great thing about ultras, compared with regular road marathons, is the relaxed and unusual approach to aid stations.  And this great thing served to turn my race around this day.  The AS at mile 23.5 was a fun, welcoming place as you can see here and I was glad to see it again. 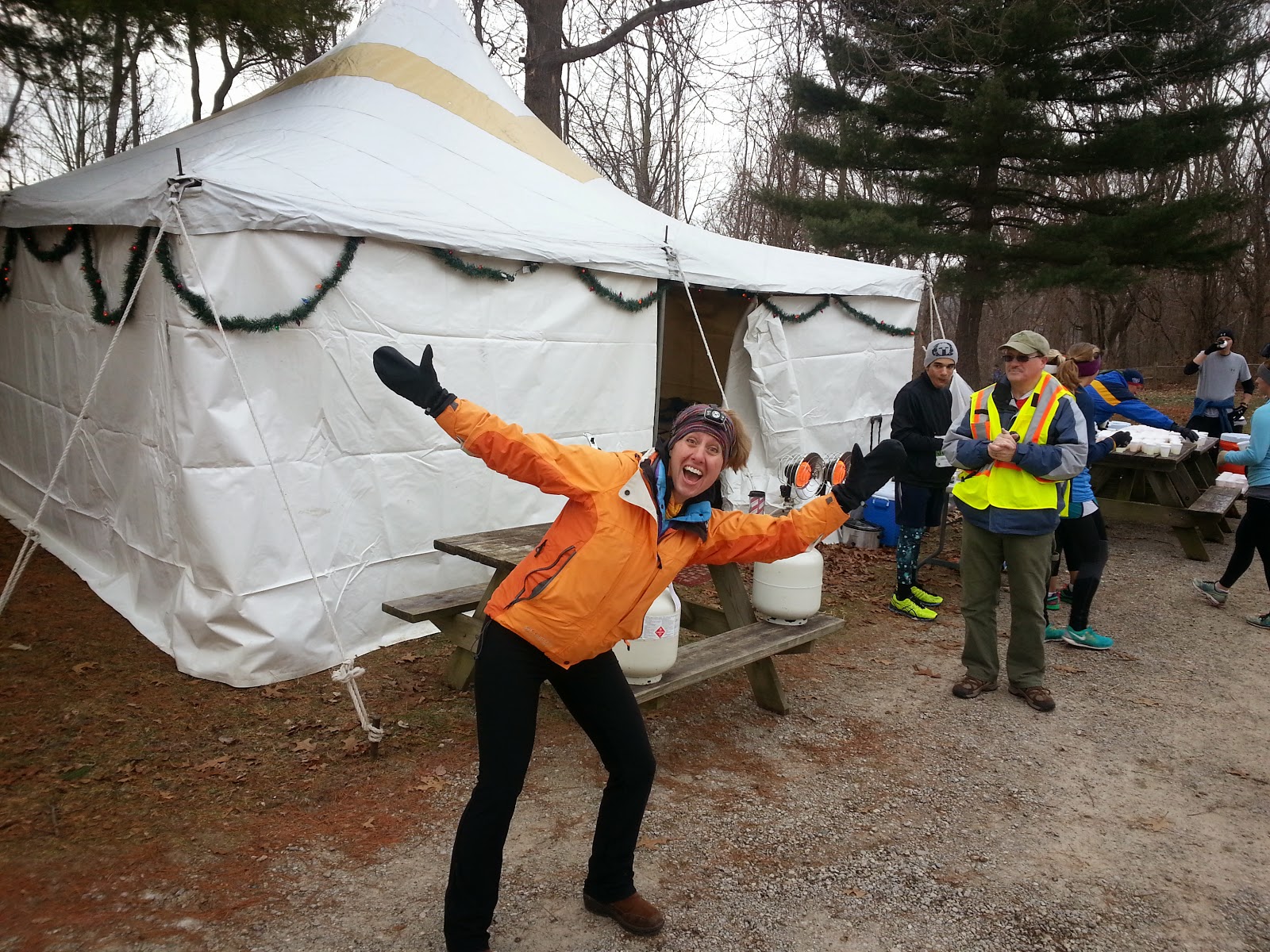 I pulled in with my water bottle out already and one volunteer asked before I did "What would you like?"  I answered and she set off to refill it with water.  Another volunteer at this table said "We have potatoes!"  YES!!  He served me two hot, peeled, large chunks of boiled potato out of the roasting pan.  "Do you have salt?" I asked, almost reflexively, craving the electolyte.  Yep, there was a bowl, with a spoon.  I layered the salt on and popped the potatoes, whole, quickly, as the volunteer's 12-ish year-old daughter looked on, slightly amazed at what she was witnessing. 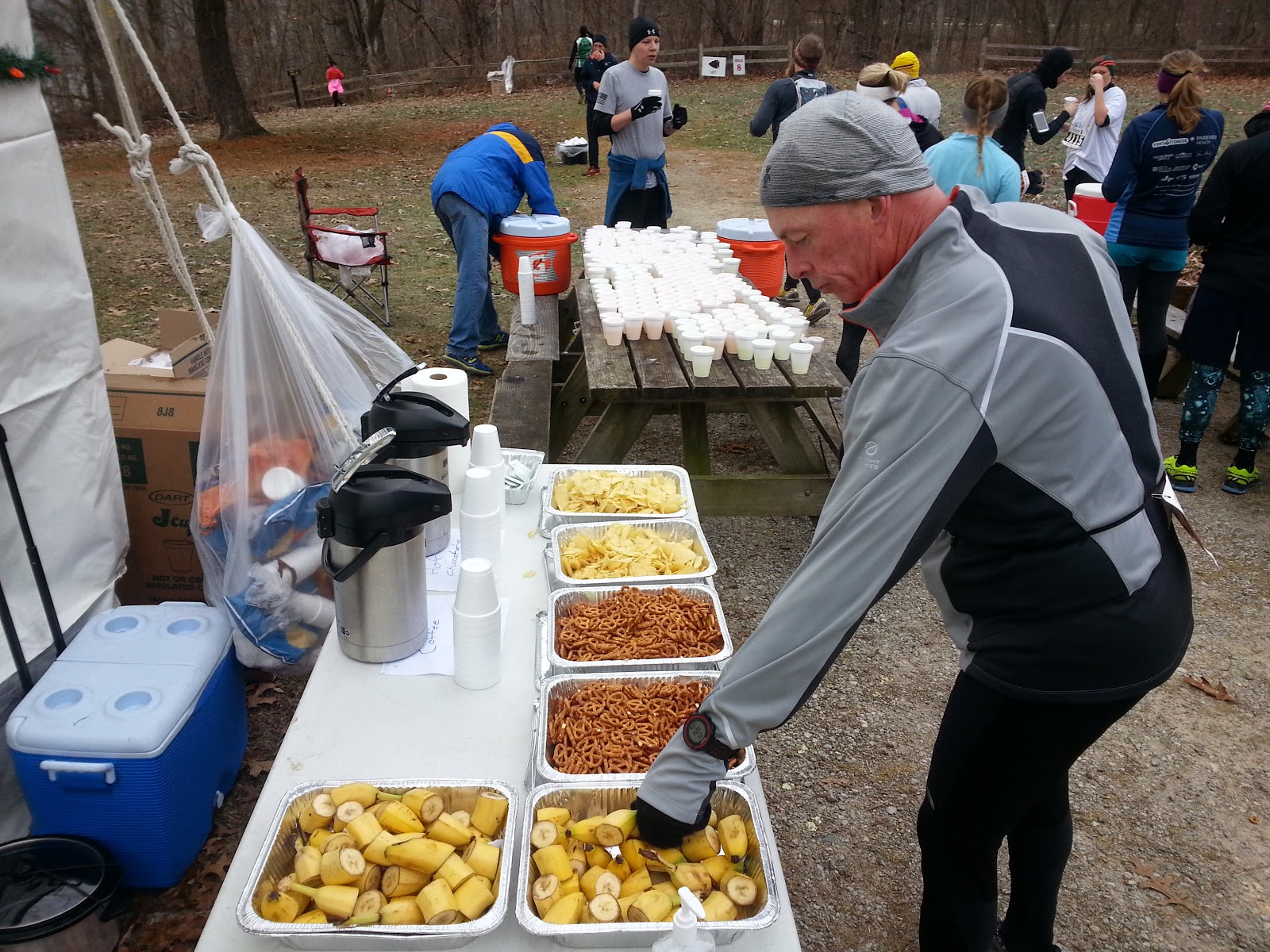 But, there was more.  As I finished the potato, I spied they had also just brought up a pan full of hot cheeseburgers.  And, boy, did that look good!!  Cut in half, they were ready for prime time.  I pulled one out and proceeded to squirt copious amounts of ketchup onto its flat edge.  At the same time, the lady came back with my water bottle and stuck it into my water belt for me.  I was set.  Thanking the crew warmly, I headed back down the trail finishing off my cheeseburger.

And it made all the difference.

Within five minutes, I was a new man.  The ingestion of the carbs and protein and salt worked wonders.  I had no trouble digesting any of it and my running pace picked up, my legs felt better, my mind was clearer and it carried for the remaining 6+ miles of the race.

The majority of the hills remained between me and the finish line but it all rolled fairly well.  The low spot behind me, the cheeseburger in me, it was a matter of keeping a decent pace.  I ran the final mile of the race and, to my amazement, crossed the finish line under 6:20, the fastest of my five 50K races.

Post race was interesting.  On Sunday and Monday after the race, I was as sore as I've been in many years following a race.  I think it was due to the fact I have not trained on trails hardly at all this year.  Thus, the hardness of the frozen surface and the un-evenness of the ground all demanded much from seldom-used muscles.

Most of all, just hang in there.  Ultras teach you that.  And be grateful for each helpful cheeseburger which surprises you along the way.