ORN:(Saturday)    11.6 miles, 2:04:45, R2/W1, 10:46/mile
An ongoing professional and personal interest of mine for the past decade is understanding the fundamental shift in business communication as a result of the Web.  This prompted me to start a blog in 2002, read a lot on the subject and to attempt to see the impact on my company.
Central to this whole matter is a concept called "permission marketing".  Traditional marketing is called "interruption marketing."  You watch a TV program, a commercial interrupts the program, you watch the commercial, and then go back to the program.  It is so "normal" we've quit noticing the interruptions.  Permission marketing, on the other hand, asks you if you are interested in a good or service and asks "permission" to connect with you.  The Internet has enabled this in a whole new way; if you've ever done a Google search and noticed ads that seem to relate to your search on the sidebar, you've seen this.  If you've ever "opted in" for email updates from a company, you've participated. Blogs are a key part of this strategy, in the thinking that if regular folks talk about a product, it has more relevance than if marketers do.  Seth Godin is a prominent writer on the subject and has helped me understand it better.
I explain this to describe my interest when a digital marketing representative of New Balance of Harrisburg, PA emailed me a month ago.  Her offer was fascinating; if I'd post a link on my blog to their store, she'd send me a free pair of NB shoes to evaluate.  We corresponded a bit on the offer.  I explained I was a committed Brooks shoe guy and I have a high standard of running shoe stores, due to my excellent experience at Naperville Running Company.  I'd write just what I thought about the NB shoes, good or bad.  She said that was OK, so I agreed on the deal.  I posted the link on April 7, to her specs (thus the typo...they wanted it to say "mens" not "men's" ...all to do with search engine optimization ).  And I started my observation and evaluation.
The first problem was which shoes to request.  I know virtually nothing about NB shoes...the last pair of NB running shoes I wore was in South Africa in1980 for my first ever marathon.  My calves ached for 3 weeks after that race and I assume NBs are a lot better now.  So, I asked the rep to put me in contact with someone at their store who could recommend the best NB running shoe for me.  I gave her the data on my current Brooks Beast size, my age, height, mileage, overproation issues.  You tell me, I asked, which of your shoes would be best?
That was two weeks ago.
She tried to get someone from the shoe side of the store to respond.  No one did.  She asked me to email their sales folks with the same question.  I did.  No response.  Finally, she sent me the link to some NB USA shoe analysis pages for overpronators.  Figuring I was pretty much on my own, I set out to find the best shoe myself yesterday, with no real knowledge base.  It was a bit circuitous.  NB has lots of shoe models.  Lots of places sell NB shoes.  Reviews existed but not on all models.  I found a couple of pairs that seemed to mimic the Brooks Beast well.  But the Harrisburg store didn't have those models.  Round and round I went late Saturday afternoon, spending over an hour trying to settle on the right model, by myself.  My wife told me we had about 3 minutes until supper, and I decided I had spent enough time already.
I ordered a pair of size 12 New Balance 1123 shoes and then sat down to delicious beef enchiladas.
Their web site worked perfectly.  The coupon code the rep gave me worked perfectly.  I have a free pair of shoes coming my way this week, with a UPS tracking number arriving today.
Those you who know me will accurately predict "this all got me thinking".  Just what is important for a company selling running shoes?  Is it the shoe?  Or is it the contact, the advice, the service?
Seth Godin makes the point, repeatedly, that the Web has made "commodities" out of almost anything we want to buy now.  I can do a Google Shopping search and find 20+ sources for the identical shoe.  If I am only shopping on the web, why would I choose one store over the other if not based on price?  To make yourself remarkable, to rise above mere "commodity", you have to do something the Web can't do...which is listen, respond and make a solution truly delightful for the end user.
I entered into this agreement to see if this store could do this.  So far, no dice.  I have a pair of shoes coming my way I think ought to be OK, but I really don't know.
Contrast this with a question I posed in this blog post last November...check out the very first comment.  The owner of Naperville Running Company somehow read my post, popped in, answered my question about shoes and offered to help me find a pair of discontinued Brooks Beasts.  He did, I ordered, I paid, I promote their store here.  I actually wore the pair he found in my long run yesterday.
Godin also points out with the ubiquity of the Web anyone can comment on customer service.  Very little happens in private.
Like this post.
Thanks for listening.  I'll keep you posted as the story continues.
Persevere.
Posted by Joe at 5:51 PM 11 comments: 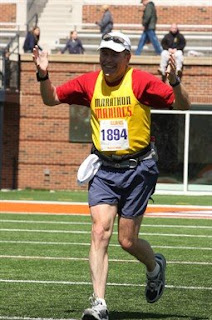 A lot of folks were overdressed, in tights, multiple layers and more.  Having run outdoors all winter, 37 felt balmy to me.  One throw-away sweatshirt jettisoned at mile 2 was all the extra I needed.  I pulled my long sleeve tech shirt off at mile 20 and finished in short sleeves (with the temp at 48F). temps).
OK, all that stuff helped.  Here's one that perplexes me.
Lack of a long run.  As I mentioned in the race report, all this happened with a single 16 mile run, two weeks earlier as my longest run since Memphis Marathon in early December.  This confounds all conventional wisdom.   How did I enjoy a 26 mile run with no slow down with one long run 10 miles short of a marathon??  I don't recommend this, to myself or anyone else.  But why did it work??
Wow, this has gone on long.  And, as I've said before, this blog is often simply a vehicle for me to think out loud.  I hope it is helpful to some others as well.
I welcome your reactions, questions, disagreements or other perplexings.  And, whatever else you do, do persevere.
Posted by Joe at 3:37 PM 7 comments: 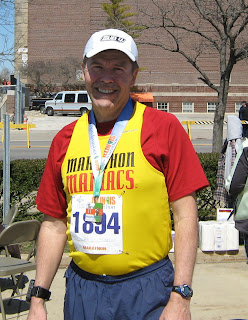 from the field to the concourse level to pick up my drop bag and get some food.  I was pretty pumped and walking normally up the steps.  All the other runners were in the usual post-marathon hobble, struggling with the steps.  I picked up some fruit and water and headed back to the car and realized I was walking normally, whistling, cracking jokes (still) with volunteers, high-fiving other runners.  Thinking back on other marathons and looking around me a little more closely made me realize this was unusual.
I hopped in the car, called Gretchen, and headed home.  Dry clothes felt good, as did some hot food.  I got home in time for dinner with our three grandkids.  Amazingly, I was able to flop on the floor and build Duplo towers with them, just a few hours after a marathon.
So, it was a wonderful day.  But why was it so good?  Why this race?  On such little mileage?  I've thought a lot about that and will offer some observations in my next post.  This is enough for now.  Thanks for listening and thanks for all I learn from each of you.
Happy Easter.  And persevere.  On the good days and the bad.
Posted by Joe at 9:22 PM 12 comments:

ORN:  5.3 miles, R7/W1, 51:59, 9:49/mile, icy, pelting, snowy mix
Perhaps it will quit being exciting at some point in time, but, shoot, I sure enjoy race weeks.  This Saturday, it's the Illinois Marathon in Champaign/Urbana, two hours from home.  I enjoy the buildup, the contacts from the organizers, the planning, the packing, the anticipating.  I got my gear half-packed tonight, as a busy week at work is at hand (but hey, since when is a week at work NOT busy?).
This will be my first 26.2 as a Marathon Maniac.  Looking forward to wearing my singlet for the first time.  I've had email contact with a couple of other MMs from the Chicago area who will be there.  There is a bit of pride that goes along with the shirt; hope I can do all the heavy-duty marathoners proud as well.
One very funny thing arose when I looked closely at the course map.  For those of you who have never driven through central Illiniois, I must tell you the most striking feature of the area is the lack of striking features.  It is flat, flat, flat.  Great place to raise corn; one county just north of Champaign calls itself "The Buckle of the Corn Belt".  But flat.  Anyway, just below the course map is the usual elevation chart.  And, as usual, it had the expected sharp ups and downs, which surprised me.  Until I looked closely at the scale.  The maximum climb will be 85 feet between miles 9 and 13.  Yes, 85 vertigo-inducing, lung-busting, death-defying vertical feet spread evenly over four full miles.  My calves ache just thinking about it!  Yep, this is the midwest.
Bloggers are also so helpful.  I could not get to Champaign on Friday night for packet pick up. Friday is both my wife's birthday and we have Good Friday services I want to be here for. So I emailed blogging buddy Miranda who happily agreed to pick up my stuff and get it to me early Saturday morning.  What a huge help...thanks, Mir!
The goal here is to see how I can do in a marathon with out a real long training run for a while.  I had more miles in March than I've had since August 2008, but no 20+ mile runs.  So, I plan to take it easy.  I'll do a 2/1 run/walk and hope to get home under 4:50, feeling good.  Focus on hydration and electrolytes, using the same plan I used in Memphis.  Will it work??  We'll find out. I'll post my quick results on Twitter/FB Saturday afternoon and perhaps more that night.  It'll be fun.
And, to top it all off, I'm sitting here listening to the Cubs and Astros...baseball is back.  All good.
Persevere.
Posted by Joe at 9:19 PM 4 comments: