The annual Hog Jog yesterday was everything it always is...a fun gathering in the small town of Flora, Indiana.  It's a summer fixture in our local running calendar and is very well attended.

In the starting grid for the 2 mile race, I had a wonderful surprise.  A friend of many years, with whom I worked closely in a previous job, was in the grid.  It was terrific to see Stan...neither of us realized the other was running.  As both of us are engineers, we each do numbers instinctively.  Wanting to run together, Stan asked first: "What time are you shooting for?"  Turned out my 15 minute target was his as well and we were both happy to run together.

And run together we did.   The 7:30 pace felt quick...I seldom run that quickly, much less for 2 full miles.  But the target was the target and I do numbers and I was running with Stan who also does numbers and....well, you get it...we kept going side by side.

The race went fine...shoot, 2 miles doesn't take long.  We ran together and hit the finish line at 14:59.  Target time achieved.  And, what was funny, Stan won a medal for winning his age group.  Funny, in that we are in the same age group.  He said later he'd split the medal with me!!

Since Stan was nursing a problematic IT Band, he opted out of the 10K race.  But we walked and cooled off between races, enjoying the conversation.  I switched to a dry shirt, put the timing chip on my left shoe (note:  why always the left shoe?  Do you have a favorite foot to put your chip on?  Mine is always left...but why?) wished Stan well and headed for the 10K grid.  There, I saw a couple of other friends (this is a local race, mind you) and then the gun went off.

A friend of mine described this race course as "one big country block plus some" meaning it was basically a one-mile square...and she's right. I needed to hold an 8:14 pace to hit my target.  Miles 1 and 2 were each at 8:03.  Like the 2 mile race, this is unusual territory for me.  Mile 3 was 8:17, a bit more realistic.  We turned the corner of the block, ran downwind of an eponymous hog farm and pivoted through downtown Bringhurst, Indiana.  Mile 4 was 8:18, followed by mile 5 at 8:15 but, by then, we were back in Flora.  We made the loop past the grain elevator, turned left and headed home.  Mile 6 was better at 8:07 and then the sprint to the end.  I hit the mat at 50:38.  Not only beating my target by 31 seconds but setting a new current-era PR by 12 seconds for 10K.

A pleasant surprise at the finish was Stan and his wife Beth waiting for me.  They stuck around for an hour just to talk some more...what a friend!!  We went for a nice walk as I cooled off and launched into more substantive conversation.  How cool is that??

We ambled back to their car and I bid these good friends good bye.  I then walked over to pick up the promised free pork burger served up to all runners.  Fresh, hot and man was it delicious! 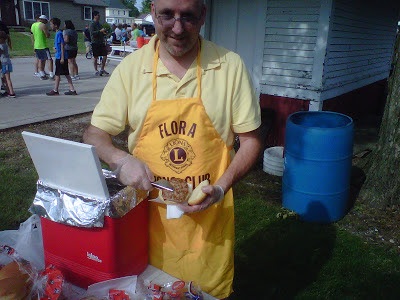 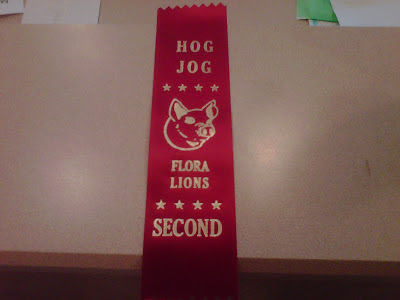 I then wandered over to the posted results and discovered I had placed second in my age group out of the ten of us in the 55-59 year old division.  So, I stuck around a while longer and got this award.  Don't you love the pig head??  It's a great momento!!

So, the summer goes on.  Two checkpoints clicked...more to come.  Stay tuned.

The Sunburst Marathon on June 1, 2013 was a surprising and enjoyable run.  I've run this one race more than any other, having participated in 7 of the past 8 years with 5 half marathons and now 2 full marathons.  I've written much here about the strong emotional connection this race has for me, with my Dad having played football at Notre Dame and the race finishing at the 50 yard line of Notre Dame Stadium.  It means alot to me, more than I can fully describe. In fact, given that I'm writing this report on Fathers Day, it makes me remember Dad even more.  But rather than try to capture all of that, I'll just describe a fascinating marathon that worked out far better than I imagined it would.

I drove up the night before and stayed with one of my nephews who now works at Notre Dame.  Then, it was up early and downtown for the 6:00am start time which is well designed...South Bend, Indiana is often hot and muggy on the first weekend after Memorial Day each year.  We got a break for this race, however, as the humidity was less severe than often and the early start put temps in the low 60s to start.  We began in a very, very light drizzle which also helped to keep things cool    I used my recently-developed strategy of running the first two miles as a gentle warm up and got through them each in just under 10 minutes each.  I then took my first walk break of the day, shifting to my usual run 4 minutes/walk 1 minute pattern.

I had decided to be quite content with a 4:40 marathon on this day.  The weather was warm and I simply wanted to enjoy the workout, be coherent to enjoy the end of the race and not be consumed with hitting time marks.  By mile 5, I was well under that pace though, so I kept holding back.  At mile 10, though, I was still feeling very comfortable and was on a pace for a 4:35 finish.  Hmmmmm, I said, I wonder what this holds?  Up we went on "Mount South Bend" (the one steep hill on the course at mile 11), and then headed on the long out and back section from mile 11 to 24.

It was a wonderful treat to get a banana at the mile 12 aid station...how many times have I  mentioned here how much I like bananas during a race??  The girl scouts handing them out at this station must have wondered why the yellow fruit caused an old guy to sing, but sing I did.  This flat section of the race let me find a comfortable pace groove.  I hit the halfway point at 2:13:32 and by mile 16, I was on track for a 4:33 finish.  We then hit the turnaround, got another banana at mile 17, crossed back over the river and headed for the stadium, still 8 miles distant.  I had a brief encounter with a balky left calf muscle which tightened up on me on the river bridge.  I stopped to stretch it for 30 seconds or so and began fluidizing better and it quieted down the rest of the way.

The miles kept clicking by just a little over 10 minutes each.  By mile 20, I was on a 4:31 pace and I realized that if I could hold it together, I could go sub 4:30, since my Universal Pace Chart padded the last 7 miles with 30 extra seconds each.   The girl scouts gave my my third banana at mile 22 and it was game on.

The challenge on this marathon course comes just before and after the mile 24 marker.  A long hill not so steep as it is just at a tough point in the race challenges marathoners.  Fortunately, I knew it was there, kept some gas in the tank, didn't worry about walking part of it and cracked jokes with the spectators all the way up.

The mile 24 checkpoint confirmed what I had thought...I was now set for a 4:29 finish.  I got to the top of the hill past this marker, turned off my beeper and ran continuously the rest of the way.

Except for once.  Running east on Napoleon Street, south of the Notre Dame campus, we crossed Notre Dame Avenue.  I paused in the exact center of Notre Dame Avenue, as the street's center line gives a striking view of famous Golden Dome of Notre Dame.  Dad described many times to us his first trip up Notre Dame Avenue as a new student in 1933 and his first in-person glimpse of the landmark.  It was a great connection.   As I pause, a helpful volunteer at that intersection, thinking I was injured or cramping, tried to encourage me.  I assured him I was fine, briefly told him the story and showed him the back of my shirt, having a photo of my Dad in action for the Fighting Irish, along with his name.  The volunteer "got it", very quickly.  "Your Dad was Gene Ely?" he said.  I seldom hear anyone use his name anymore and it sounded wonderful to my ears.  I grinned.  "Yes, sir, my Dad is Gene Ely!"  It was great so say out loud.  It was a fantastic moment.

From that point, I was on cloud nine.  I opened up the pace, nothing to hold back, my spirits soaring, feeling wonderful with under a mile to go.  I made the left turn towards campus and kept motoring on, steadily picking up the pace.  Crossing Angela Street onto campus, the Stadium looming on the left, people walking back to their cars from the half marathon, 10K and 5K races, cheering on the remaining marathoners; it's a terrific atmosphere.  We ran along the stadium to its north end and dashed down the tunnel and onto the turf of ND stadium for the last dash through the end zone to the 50 yard line.  Later, I noted mile 26 was my fastest  individual mile of the day at 8:59 and the last 385 yards were at an 8:22 pace.  Across the finish line officially at 4:26:58, it was a negative split by 4 seconds.  Marathon #39 was done.

Post-race on the ND field is a terrific experience.   Stretching on the south goal post made me laugh.  I noted two other guys walk up to stretch at the same time...I asked them if they, like I, really needed to stretch or were also thinking it would be cool to watch football games this fall and say "Hey, I stretched on that very goal post!"  All of us allowed both things were true.  Runners are basically honest people.

How is it happening that I've now gone sub 4:30 in 4 of my last 5 marathons when I had come to believe it was an impossible goal?  I'll ponder that this summer and perhaps share more of the thinking as we go.  More goals are evolving.

Thanks for listening.  Persevere.