The Zoom! Yah! Yah! Indoor Marathon (ZYY) on January 8, 2017 was a blast.  It was terrific simply to run long in shorts in the middle of winter; Yet, this race experience was unique and most enjoyable.   Crazy to run 150 laps??  Not at all...it was a joy.  In two big ways.

Last summer,  my local running pal Jon and I were musing on race plans over nachos when two dots connected.  Both of us have sons who recently moved to the Minneapolis/St. Paul, Minnesota area.   Both of them have recently had daughters (well, their respective wives had the babies, but you get the idea).   Seems like a road trip, right?  So, can we find a race to run in or near Minneapolis?

Jon, a database guru par excellence himself, wiped the cheese from his fingers, jumped online, found ZYY and posed a fascinating idea; Let's drive to Minnesota in the dead of winter, visit our kids and run an indoor marathon!!  Made perfect sense, to us, and the plan was on; ZYY was the target race.  Pass the jalapenos, please.

Entry to ZYY is via lottery; Dick Draymont, the excellent RD, lays out the details on the website.   We put in our names mid summer and, over the Labor Day weekend, learned we were lucky winners of coveted entry slots to the race.   Travel plans got interesting and I'll spare you those details, but it all came off.  With temperatures at 7 below zero, Jon picked me up on race morning at my son's house at 5:00am and we drove the 20 miles from his place to lovely St. Olaf College in Northfield, Minnesota.


Since Jon and I wanted to spend time with our kids, we missed the Saturday night buffet for runners, which I heard was terrific.  Nevertheless, we got our packets on race morning and found a spot along the track to "set up camp" for the morning run.
Dick didn't mess around and we got started a few minutes early and at 6:30am on a cold, dark Sunday morning, we were running a marathon.

One of the wonderful and unique features of this race is the lap counting.   You'd figure chip counting would be the norm, as other lap races have found.  Nope.  Instead, members of the St. Olaf women's cross country and track teams crawl out of their comfy dorm rooms as early as we did to manually record each runners' laps.   Yes; each runner had his/her own personal lap counter and timer, whom we met pre-race.   Dick added yet another layer of personalization of the race by doing his best to match some characteristic of the lap counter with the runner.   Mine was Susie.

Susie grew up about 50 miles from my home; we surmised we had likely even run in the same races while she was in high school or home on summers.   Susie is a senior and a math major, so I felt confident that she'd get all the numbers right. No third order partial differential equations in spherical coordinates required for this event.

So, round and round we went.   Each time past the chairs with the relentlessly cheering student runners, I made sure I made eye contact with Susie; armed with her clipboard and watch, she dutifully recorded each lap time, to the second.   She updated me every 25 laps to the lap total...no way to keep track of that in your head.  Dick had set up a terrific playlist; the music was great.   We all had our names on a small bib on our back...we quickly got to know each other and the race became a social event.

Two other personalization notes on this race.   Note above, I wore bib #63.   Dick asked me pre-race if I liked it...turns out he was able to make the bib number our age for about a third of the field.  Nice.   Second, below is a poster which Susie made for me.   In fact, all along the east wall short chute of the track was a poster for each runner, hand-made by the lap counters.   She got the state map of Indiana built in as well!   I brought it home...one of several wonderful mementos of the day.

And that's pretty much how the race went.   This was my fifth indoor marathon and I've learned to just go run and forget the circles.  Dick set up tables at each corner of the 282m mezzanine course for water and food.   Every 20 minutes, I drank and had a quarter PB&J sandwich (my nod to trail racing).  Enjoy the music, play the air guitar, chat everyone up and eventually you cover 26.2 miles.  So it went in this event.

Over that summer bowl of nachos when Jon proposed the road trip, I immediately mentioned to him that January 8 was my Dad's birthday.   He would have been 102 years old on January 8, 2017.   It made me miss him to think of how he'd have laughed to hear me doing such a goofy thing on his birthday.   But, in the back of my mind all along, I thought it cool to be running on his birthday.

On the Thursday night before the race, however, I got to thinking more about Dad.  It was brutally cold here at home and I was running 5 miles on an indoor track at home in my final training run before race day.   What might I do to honor him?  Gradually a series of thoughts gelled as I went round and round.   Hmmmm, he'd be 102...might I do something on my lap 102 to honor him?   He played football at Notre Dame; hey, that's it...might I pause and sing the Notre Dame fight song before I start lap 102?  Yes.  And I'll get a video me singing to share with my three sisters.  But what shirt would I wear in the video?  I had another shirt planned which suddenly made no sense...I'd really need to come up with a Notre Dame shirt but I don't have one.   And I'm leaving early on Friday morning.  And how about a photo of my Dad?   My sister might have one.  Could I carry a football with me?  Whew, dunno...maybe my son can find one for me to borrow. And, oh yeah, this might mess up the race...I should check with the RD for his permission.  But, I gotta move fast.

So, after I finished, I remembered a local store where I once saw Notre Dame shirts.   I zipped over there, hoping to find something, willing to settle even for a cotton shirt.   Alas, they actually had tech fabric Notre Dame shirts, in my size, on sale!!  Bingo.  I zapped a note to Dick the RD, asking his permission.   Another email to my sister Karen, the family historian and archivist of all family photos.   Zip...Dick wrote back, enthusiastically welcoming my effort...that was nice.   Zip...Karen emailed me this "action photo" of my Dad which we think was taken during his junior year at Notre Dame in 1936.  It was falling into place.  I printed off the picture of Dad and packed for the Twin Cities.

When I got to Minneapolis, I shared the plan with my son, Nathan.  Hmmm, he says...one phone call to a neighbor and we had a football I could borrow as a prop for the day.

So, it all was set up.   Prerace, Dick asked me if I was all set; he was so supportive.   Several times during the race he asked me how close I was to my lap 102.  Sorry, Dick, I'm not all that fast!!  In fact, the race winner finished about 3 laps before I got to lap 102, at about mile 18!! (You'll see him early on the video, in the bright yellow shirt with a medal.)  Susie let me know my countdown, starting at lap 95.   I had my props assembled at my base camp.   It was so much fun to anticipate.   Finally, I finished lap 101 and, in front of the assembled timers, explained what I was doing and, in honor of my Dad, Gene Ely, on his 102nd, did my best to sing the Notre Dame Victory March.   Jon captured it all on video. 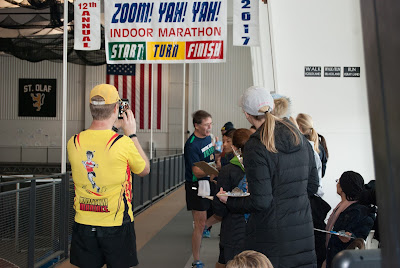 And here is the video:

It's hard to sing well after running 18+ miles but who cares...this moment was one of the highlights of all the running I've ever done.   I can't even quite express what it meant to remember my Dad on his birthday and have others who never knew or even heard of him realize it was special.

I then ran lap 102, carrying Dad's photo and a football.   So many of my fellow runners realized what was going on and were so supportive.   I'm deeply (and forever) grateful for Jon pausing in his race to capture the video for me.  It was a blast.   I could almost hear my Dad's big, hearty laugh as I ran that lap, even though he died in 1993.

I finished lap 102, stowed the photo and football and proceeded to run 8 more miles, nearly an hour and a half worth of running.   No "Wall" in this race, though...the adrenaline and enjoyment carried me the rest of the way.   I told Susie "we're back to normal the rest of the way."   And, pretty much, we were.

The rest of the race went well.   The final 10 laps seemed to go by quickly...Susie commented I seemed to run them quickly.  It felt that way.  Spontaneously, as I got to my final lap, I grabbed my Dad's photo and the football and crossed the finish line with them.    Marathon #70 concluded and what a day it was.

I felt bad for the students tracking those of us in the back of the pack.  They were so positive, though, and real troopers to hang around despite our slowness.  I warmly thanked Susie for her help all day and let her get on with something far more interesting than watching old guys shuffle around the track.   Yet, the enthusiasm from all the students was unique and truly a difference maker.

Jon finished up a little bit after I did.  We cleaned up and headed back to our kids' houses in the Twin Cities.

It was a remarkable morning, a remarkable marathon.  Mega-thanks to RD Dick Draymont, all the amazing and tireless women of St Olaf's cross country/track teams and Jon for his friendship.   And, thanks again to my Dad...I'm blessed to have had such a great relationship with him.   The many things he taught and modeled for me will never be taken away. 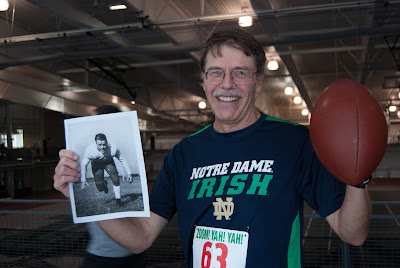