Summary:  The Veteran's Marathon in Columbia City, Indiana became an enjoyable long training run coming, as it did, only 7 days after a hard-run marathon.  It's amazing to me it could be so much fun to knock off two marathons in a week's time.

Even after 40+ marathons and ultras now, I find it fascinating that the remarkable thing about a particular marathon is that there was nothing really remarkable about the race.  This was a nice long run on a sunny windy day with no pain, no wall, no hassles.  It was a small field, so I had only 2 or 3 conversations.  Most of the time I was by myself, enjoying the solitude of distance running.  So, since my experience was fairly unremarkable, I'll simply make a few remarks and add a few reasonable photos.

Since I had a business meeting the day before the race in the same part of NE Indiana, logistics were simple.  I booked a room in Columbia City, was up at 5, drove out to stash four bananas next to a fence post which we would pass four times, parked near the start line and lined up on time.  The race started with a bang, as a local cannon reenactment group fired off a blank howitzer round.  Off we went.

The course this year was simplified, with a single loop of 13.1 miles east of town which the marathoners ran twice.

The cap I wore was the right weight for the day but, when running into the wind, I had to flip it around to keep from chasing it off into the nearby corn fields.


I finished the first loop in 2:18:17 and got a few smiles from the traffic police as I  headed for the second lap, saying "Hey, let's just do this again!"  But that's pretty much what we did...just do it again, only this time with fewer people and the 200 or so marathoners well spread out.

My map-reading skills helped the race prep, as the course layout had a one-mile ish segment which we traversed four times.  A particular fence post along this stretch was at miles 5, 9, 16 and 20.  The four bananas I stashed there were perfect for fuel and made for some funny looks each time I jumped down in the weeds and came up with curved yellow fruit.

The last five miles went quickly for me.  The mile splits were all the same as the rest of the second half but mentally they just zipped by.  We got back into the heart of town and it was over.


I did see quite a few people I know from local races.  I snagged this photo with fellow Maniacs Andrea from Wisconsin and Boris from Michigan at races end.

And that's it!  Another marathon done.  It's been an enjoyable stretch of racing during our fine fall weather, with five marathons, two half marathons, a 15K, a 4 miler and a 5K in 11 weeks.  I am fine, though, to not have another race until the HUFF 50K on December 28.

Thanks for reading.  Persevere.


Summary
The Indianapolis Monumental Marathon is a well-administered race which, on a perfect day to run, afforded me the opportunity to set a PR in the marathon. I did not hit my sub four hour goal for the race but I was happy nonetheless. The marathon is an outstanding and relentless teacher.
Gory Details
This race was the second in a series of three this fall which I hoped would land with good weather enable me to make a serious attempt at getting under 4 hours for the marathon. I could not have been better served with the combination of course and weather I had on November 2nd.
The Monumental Marathon is in its sixth year. It represents a substantial effort by organizers to bring a "big city-style" marathon to Indianapolis. They have succeeded in many respects, as over 13,000 people signed up for the 5k, half marathon, and marathon.
I drove down the morning of the race. I had intended to go down by myself. However a wonderful surprise emerged when a neighbor (who knows of my enjoyment of running) phoned on Thursday night before the race and I asked if I could give a ride down to her nephew. Said nephew and his wife and three children were staying at our neighbor's house and no one was interested in dragging 3 preschoolers in the pre-dawn darkness to go stand in the cold while Daddy went running! This turned out to be a wonderful surprise, as Chris and I discovered much in common during our drive down. We are both old baseball players, he a pitcher/outfielder, me a catcher. The competitive juices we both stoked on the diamond from childhood through college we now flesh out via running. It was a treat to get to know Chris and also a treat to see him after the race and hear of his 3:27 time the first time he's ever run 26.2. 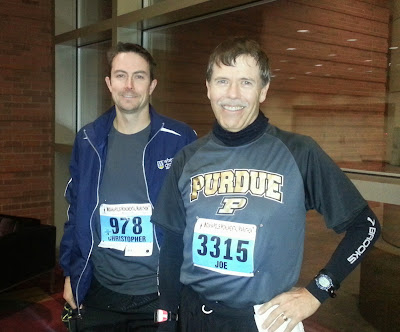 My race revolved around an attempt to get under 4 hours. I've written about this in previous posts and I had a strategy I hoped would work.  With a flat course beckoning, race day dawned dry , with temperatures in the low 40's. Perfect, a real path to hit these splits.

What I had not anticipated was the sheer size of the crowd wedged into running the city streets of Indianapolis. The gun went off precisely on time and the 10,000 or so half marathoners and marathoners begin a winding path through the heart of the city. While, on paper, the course went past many of the famous sights of the city, the turns and potholed streets required one to pay close attention in the midst of crowd. I knew I needed to keep each of my early miles at or slightly under 9 minutes. This proved difficult in the pack. My first five mile times were 9:15, 9:08, 8:32, 8:56 and 9:05. They added to exactly 45:00, on track, but more effort in bobbing and weaving than I had anticipated.
By mile 7 we had a little bit of space yet it still felt very crowded as we moved from having curb to curb to simply having a coned-off single lane of well-traveled streets. By mile 10, I was 29 seconds over my expected pace and even though the half marathoners had pealed off on their trip back downtown, the course remained crowded. I discovered not surprisingly that I kept running into that large pack of runners surrounding the four-hour pace group leader. I wanted to get slightly in front of them and did so occasionally. But merely walking through a water stop, which was part of my core strategy, often let them pass me again. At the half marathon mat, I was dead even with the four-hour pace leader but my time was 1:58:21. I went to Purdue and I can do math and I know that 4 hours divided by two is not 1:58:21! I think the pace dude was a little quick.
Shortly after the halfway point, we pivoted back towards downtown Indianapolis. Unfortunately, this course continued to narrow while the blob of runners at this pace remained the same. From mile 14 through almost 17 we were wedged onto one lane of Meridian Street, one of the busiest in Indianapolis. Much traffic zoomed by just outside the cones. At the 17 mile mark , I was a full minute behind my projected pace. Most of my miles where the 9:02 to 9:20. From miles 18 to 20, we wandered down progressively narrower paths and side streets, I was plotting just what I would be doing the last few critical miles.
I hit the 20 mile mark at 3:01:49 nearly 2 minutes longer than the 3 hours even I had targeted. As mile 21 stretched to mile 22 it became evident that the turnover I needed to keep the pace was not going to happen on this day. It was not a function of the weather or the crowds or the pace or anything. At this point I simply couldn't keep up with the rabbit chasing the 4 hour marathon.
Therefore I modified the plan hoping I could still get a PR. I reset my watch to go back to my run walk sequence, this time using the three minute run, one minute walk routine. As it has so often done, it restored my legs and gave me some confidence as to how I can finish. We turned back onto Meridian Street heading straight south into the heart of Indianapolis at mile 23, where I gathered my wits to see if I could get ahead a PR.
I hit mile 25 just under 3 hours and 56 minutes. I knew that if I applied myself I could certainly cover the last 1.2 miles in less than 12 minutes. So apply I did. It was just work at this point...block by city block, keeping it going, despite the wind in my face inbetween the tall buildings. We made it to the State Office buildings, two left turns and the finish line. I hit my watch and was thrilled to see the digits 4:07; a new PR on a legitimately measured marathon course I was thrilled.
Within about 30 seconds after crossing the finish line, a gentleman walked up to me and said "Joe Ely, how nice to see you!" I looked up and it was Bob Kennedy. I met Bob the year and a half ago when he ran our first Circular Logic Marathon, for which I am the RD. Bob is pursuing a wonderful goal of being the first man in the United States to run a sub four-hour marathon in each of the 50 states after turning 60 years old. Bob returned to Indiana to run the Monumental and succeeded, logging his 44th state a few minutes earlier, finishing in 3:53. Bob and I had corresponded quite a bit about the strategy necessary to consistently run marathons under 4 hours at our advanced age. I attempted to integrate many of Bob's hard-learned lessons. Some I did not execute as well as he did. Others truly worked well. Bob was both empathetic and insightful about my finish. It was really good to see him again. I admire the work he has done. 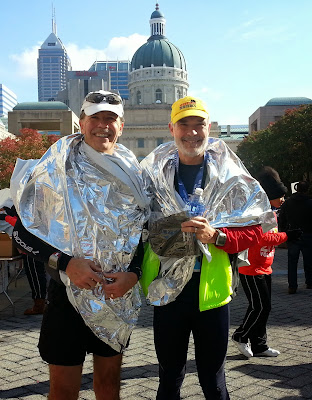 While the weather was perfect for running, I got chilled quickly while walking and chatting with Bob. So I headed for gear check, picked up the dry clothes I had left and walked to the Indianapolis Convention Center about a block away. It was wonderful to change into a dry shirt in a closed, well-lit, virtually empty, clean restroom! From there I walked back to my car, thankful my legs my feet and my spirit felt terrific.
In summary, I'm very pleased with this marathon despite the fact I did not get my supreme goal. I truly ran this race as hard as I could. I'm thrilled with the stat sheet I paste below (despite being the slowest "Ely" in the race!). I have complete peace that I "ran the best race conditions allowed", as my motto in running has been for a number of years now. Will I again attempt a sub four marathon? Right now I don't know, I have a hard time imagining running a marathon much better than I ran at the Monumental. And, if I never run a marathon quicker than 4:07, I'll be fine.
And this is one of the beauties of the marathon. It is so long, it is so hard, it extracts so much of you physically and mentally, yet is the fairest and most demanding teacher of any physical endeavor. And if we just keep learning from it, we are richer for it.
Persevere my friends and keep learning. 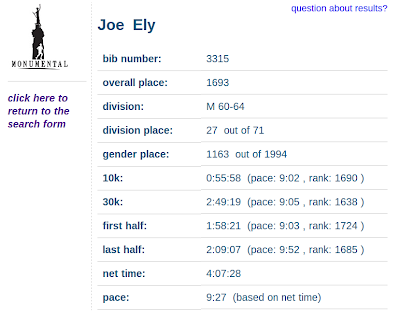