It all fell into place...three races in three days.  I enjoyed the weekend a lot, piled on 35.6 miles of racing and continued to get set for fall running.

The answer is simple...this was an efficient way to get set for a major target race.  For a couple of years, I've wanted to take on the Door County Fall 50, a 50-mile Wisconsin ultramarathon on October 25 in an area where we've vacationed for 30+ years.  I haven't told many about this target, as I just didn't know if I could get ready for a 50 miler.  But my training through the summer has gone well, so I signed up.

As a final prep for the 50 miler, I'm going to do my first ever marathon double weekend, running the Air Force Marathon on Saturday, Sept 20 and the Fox Valley Marathon on Sunday, Sept 21.  Looking at the calendar, Labor Day weekend was exactly three weeks ahead of the double.  All 3 of these races were convenient to my home..could I call them collectively my long run for the double??  I decided I would.

This is a gem of a race which celebrated its 40th anniversary this year.  Amazingly, I had never heard of it and what a pity...it was wonderful.  There were a couple hundred runners and we were treated to a fabulous course on hard-surface bike trails through the Ouabache State Park just outside Bluffton, near Fort Wayne.  I loved the course. 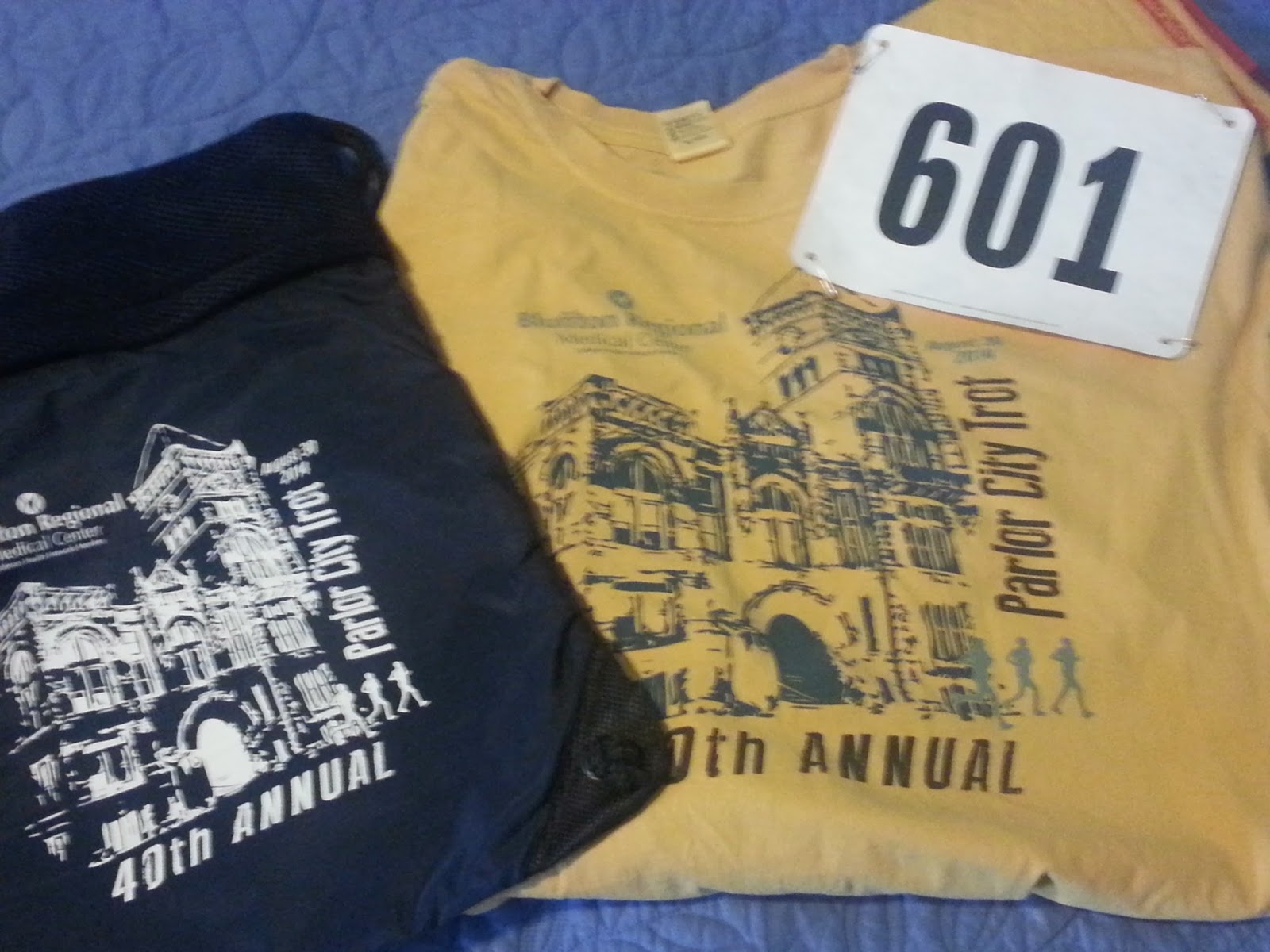 My aim for each of the races was to run at a 9:00/mile pace.  Early on in this one, I fell in with Greg and Gail who were at that pace and we ran almost the entire race together.  The miles clicked by, steady and solid, despite the temperatures in the low 70s but high humidity.  The overcast skies kept the sun away and I finished under 2 hours at 1:58:15, a 9:02 pace.

A treat:  packet pickup was at a municipal gym and, post race, we could use the showers there for free.  It was terrific to get a hot shower after being soaked with sweat...the two hour drive home was much more pleasant as a result. 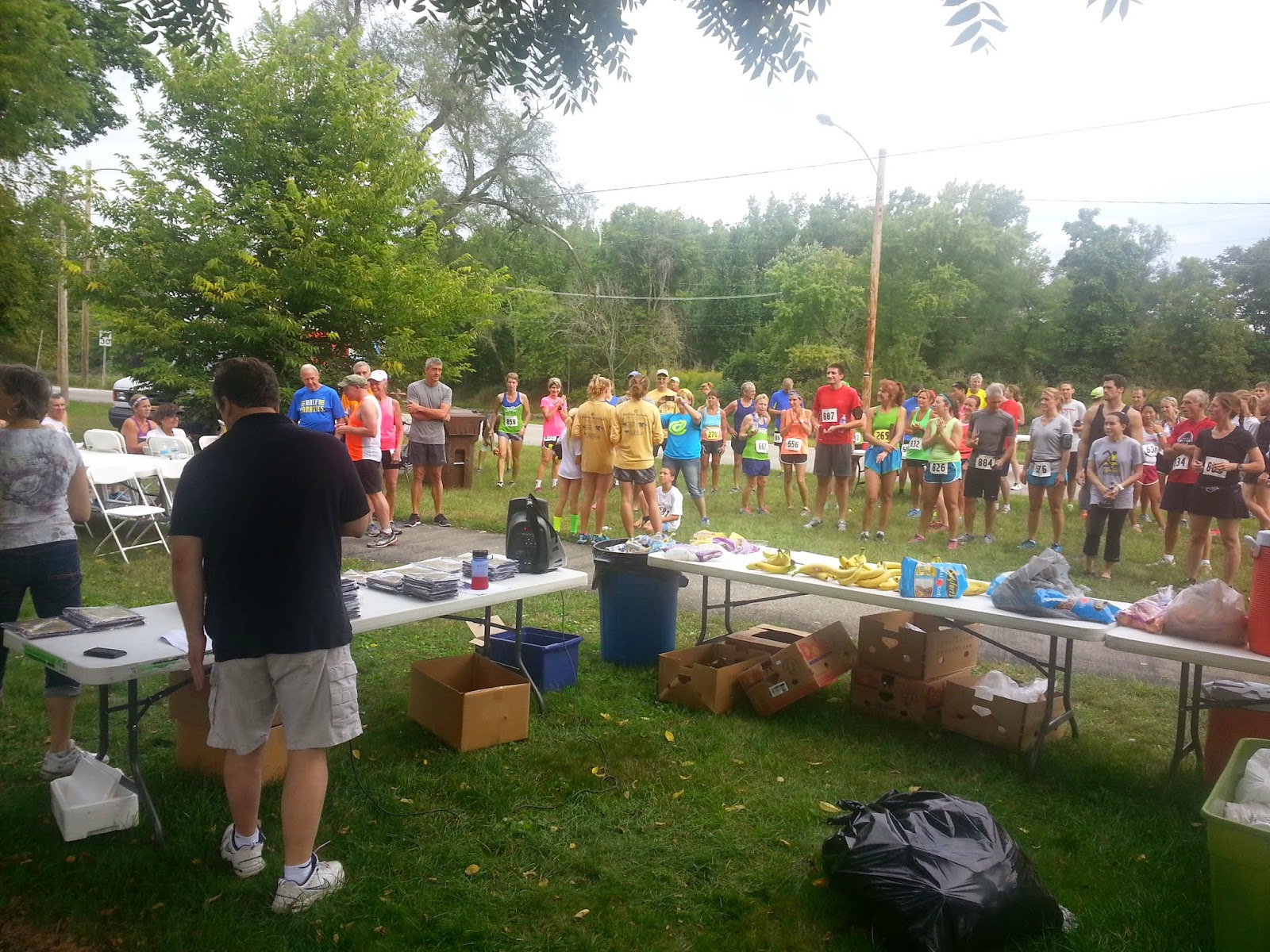 A fun bit of realism as well.  The award ceremony took place not long after I finished and, with a small field, 5 year age groups and awards for the top two in each AG, I thought this might be my chance to win an award.  As my high school math teacher was fond of saying "If you make the pond small enough, any of you can be a big fish."   Alas, the second place man in the 60-64 AG ran a 1:47, so I was at least 10 minutes shy of a big-fish moment.  I was fine and headed home.

Usually, when I get home from a race, it's back to the regular routine.  Not this day...I had to handle my nutrition and other activities knowing I was back on the road at 5pm for the 7pm race in Indy!  I did end up watching a wonderful Chelsea vs Everton soccer match from England, got my hair cut and got a new battery in my race-day watch.  Then, load up and head for Indy, only an hour away.

This was the inaugural effort for this HM.  The night race format was fun.  The organizers measured the 13.1 mile distance into four equal laps in a city park area, starting and finishing at the Major Taylor Velodrome, just north of downtown Indy. 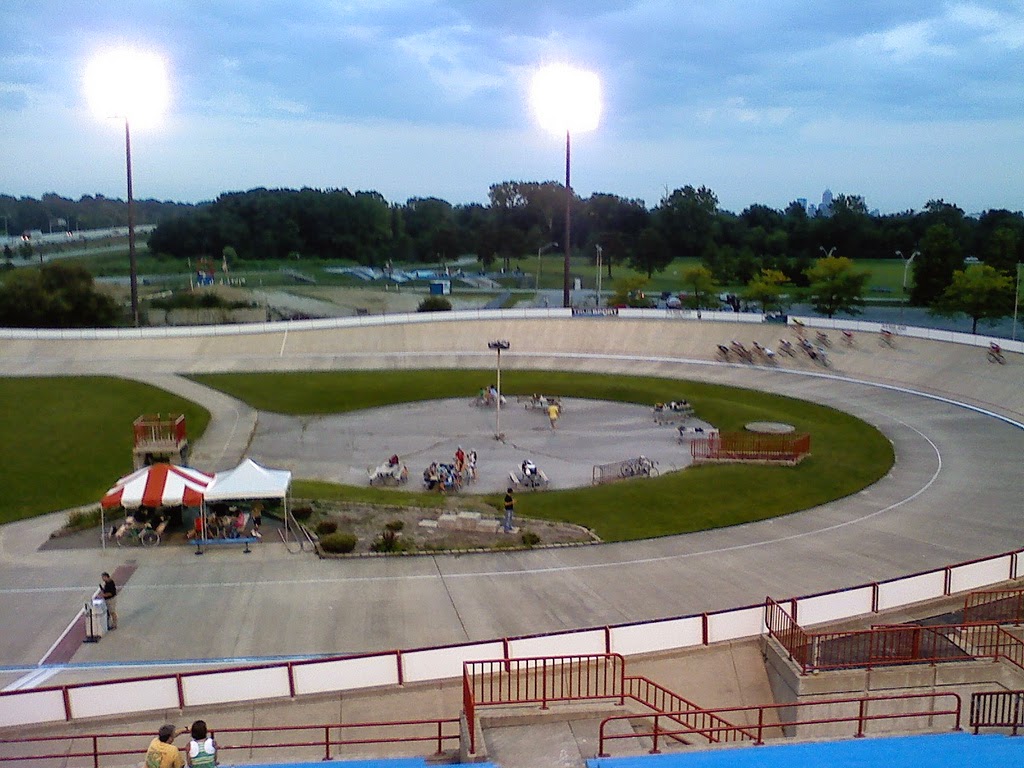 I had been by this complex many times but never in it...it was well suited.  Plus, it's just cool to say the word "velodrome" and know it's a high speed bike track.

The course came into and out of the bike track through a door along the back straightaway and then went out and essentially did one big lap around a city golf course.  It contained two modest hills (well, in Indiana, we'd call them big but not many others would name them such) and was an interesting route.

After running at a 9:00/mile pace that morning, I hoped to do the same for this night race.  During the first lap, I did (in 30 minutes flat) but it was obvious to me as I completed lap one that would not hold up for the next three.  In this race photo, you can see my consternation as I completed lap one. 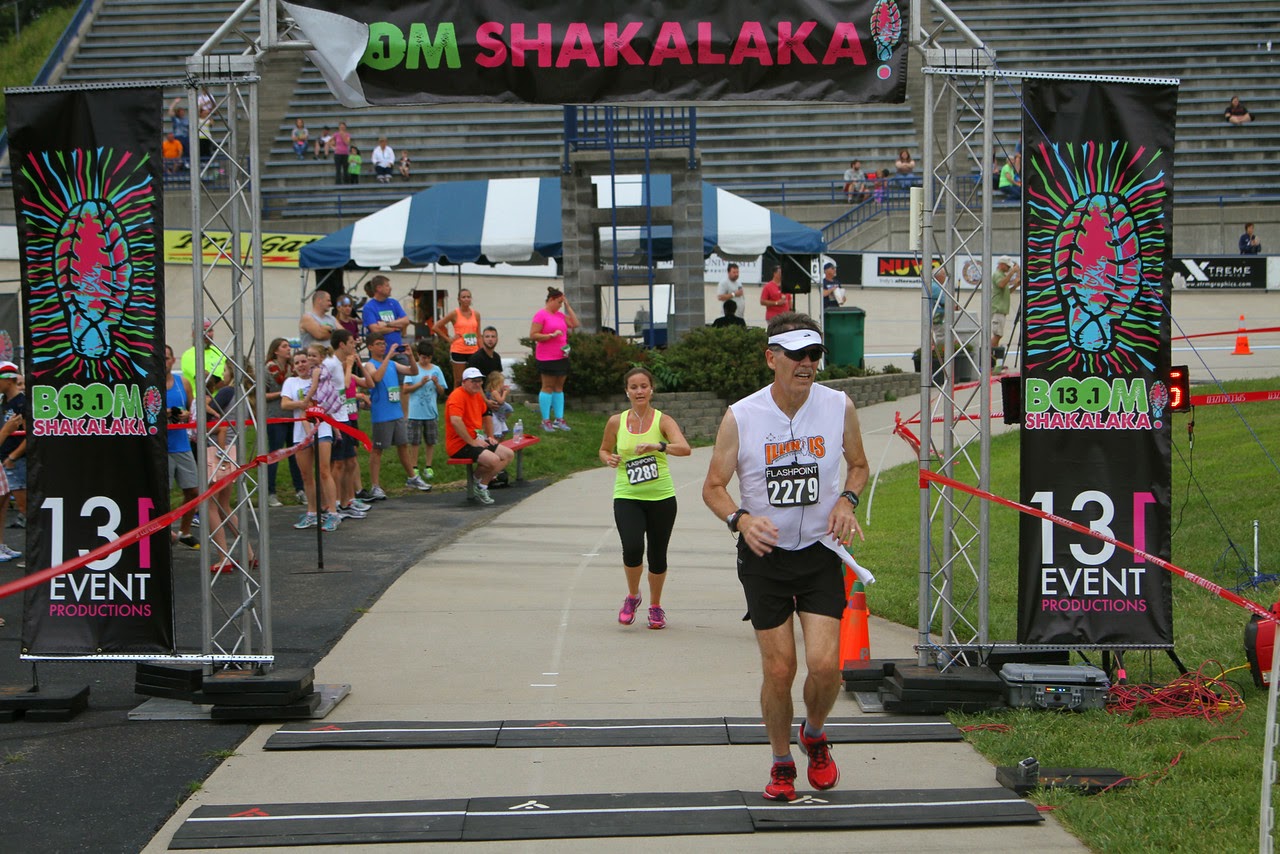 Re-calibrating my expectations as I headed out for lap two, I decided to accept the fatigue I felt in the legs and the heaviness of the 78 degree, very high humidity evening.  I turned the outing into a training run, instead of a race.  I switched to a 4/1 run/walk routine and ran in a more relaxed, unpressured manner.  It took most of the second time around (some 37 minutes) to get it right in mind and body, but you can see I am more at ease when I came across half way through. 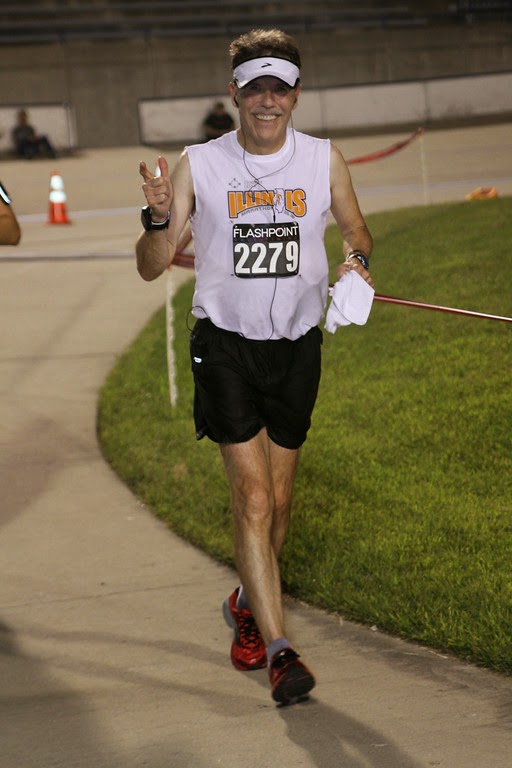 Laps three and four were actually fun, taking 37 and 38 minutes each.  I was able to talk with a number of folks I know and just knocked off the remaining miles.   The only fly in the running ointment was a dandy case of "sour stomach" pretty much from the first lap onwards.  Not sure what caused it, but I tend to think it was a hydration issue coupled with the timing of the afternoon food.

I've run this race three times before, unlike the other two races this weekend.  It's a hoot, as this race is part of a big civic event, which means we get to run in front of thousands of people who are lined up to see a big parade.  Two local runners rode along with me and we enjoyed the day. 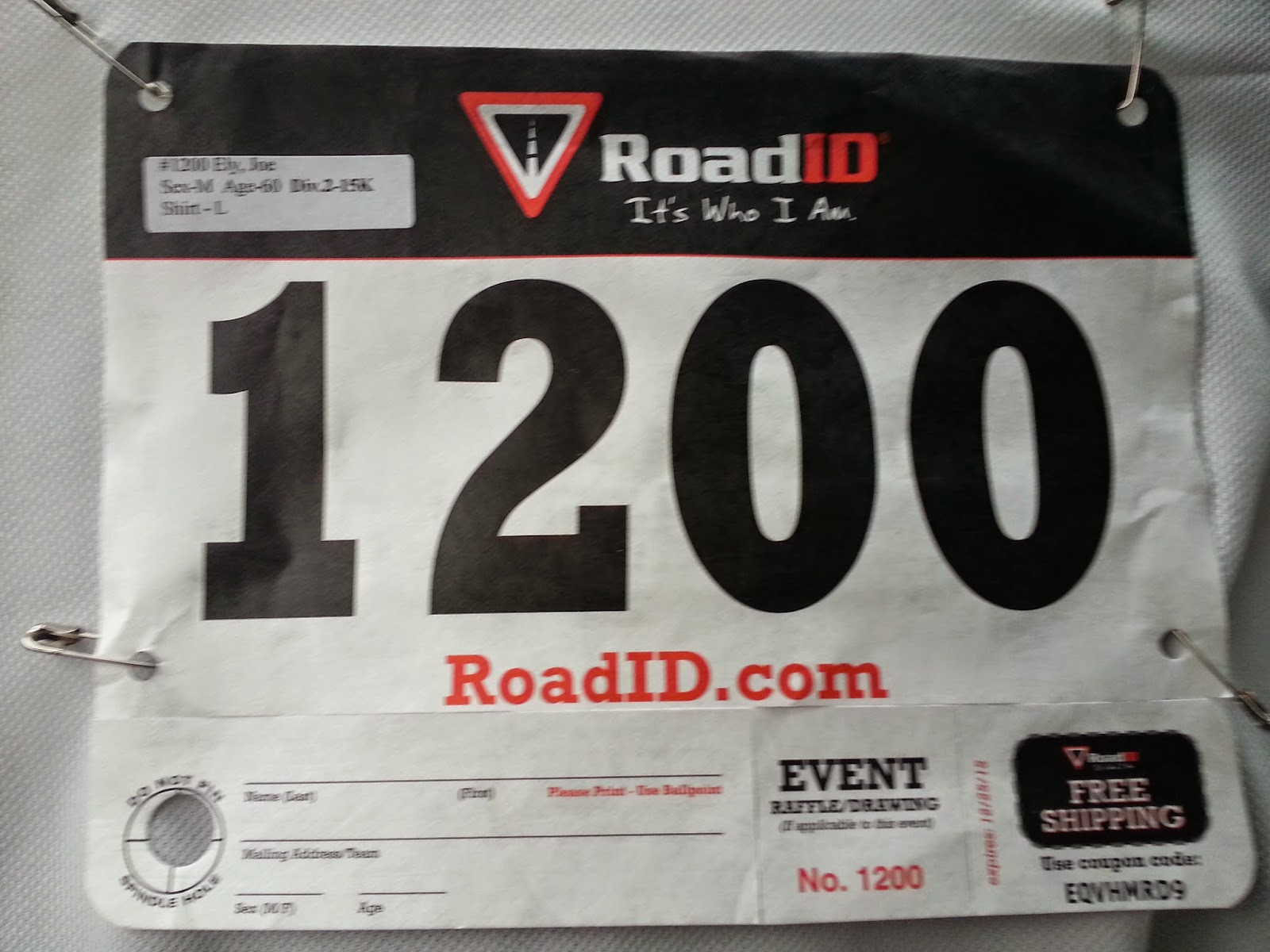 We picked up our bibs, mine decidedly "round" for this race and got organized. My interest was to see just how I could run two days after doing the pair of HMs. Typically, two days after a long run is the "most-sore" day of them all.  I took a longer than normal warm up run and carefully stretched before we started.  The race started on time and off I was, racing again...it all felt quite familiar.

The temperatures were in the upper 70s already, the humidity very high and the sky leaden and overcast.  The air was just plain heavy.  I tried to hit a 9:00/mile pace from the start.  There was some gentle roll to the course and one solid hill.  I was able to manage the ups and downs and hold the pattern.  My quickest mile was 8:37, my slowest 9:14 and the aggregate pace was 8:59/mile.  I was drenched at the finish but happy with the results and how I felt.

Man, that was fun!  I really enjoyed the back to back to back races.  My legs and feet feel fine and, other than the sour stomach on Saturday night, it all worked.  Remarkably, I was in the top half of the field in each race, not something that happens all that often.  The heat bothered everyone, I guess.  Next stop is my first-ever double weekend on Sept 20-21.