Around mile 10, a fellow runner who had also run HUFF numerous times captured the race and the day:  “Each year the course is the same; each year the race is entirely different; you have to always adjust.”

Yes...that’s the story of what has become a highlight of my running year.   In my tenth start and ninth HUFF finish, each run depends on weather, surface, wind and preparation, making it a “new” event every December.

This year’s race was just tough for me...the first 15.5 mile lap had no rhythm and much malaise; the second lap was an exercise in endurance.  It was not a good run.   No glory, no breakthroughs, no drama.  Perhaps, more empathy.   One comic situation; one running hack; but otherwise, just a long, hard run.

The HUFF 50K course is two trips around a 15.5 mile route winding over and through the scenic Chain O Lakes State Park in NE Indiana, near Fort Wayne.  I felt ready and positive going into the event, almost pumped since we’ve had so few races this year.   Yet, the early going was anything but smooth.  I couldn’t find a groove, felt tight and generally clunky.   It was a full six miles before I even felt warmed up; yet even then, it was work...not the enjoyable run in the woods I had hoped..

Around mile 11, I felt an unfortunately familiar twinge in my left ankle.   This has come and gone since mid October in training runs.  I was wearing an elastic ankle brace over my sock which had helped before but the twinge returned.   Feeling poorly, with an ankle twinge, I figured I’d drop out at the halfway point and live to fight another day.

This triggered two imaginary conversations in the four miles from the twinge to the end of Lap One.

The first was with my work colleague and experienced competitive runner Mike.  We’ve had many real discussions on race-day adjustments and I tapped into what I thought he’d say in this.   His core quote:  “Joe, it’s not a capital crime to just have a bad race.  But quitting if you are not injured is bogus.  Let’s make adjustments.”  This conversation got me out of myself, giving me a mechanism instead to look at myself from the outside in.   Many words followed in this chat with Mike, analyzing my condition from the soles of my feet to top of my head.  We agreed on three adjustments with a specific place to assess them:

All very logical (Mike is a fellow engineer, mind you).   Yet emotionally, I still wanted to bail.   I can’t recall ever wanting to drop out of a race as much as I was at this running of HUFF.   The logical argument alone couldn’t compete with my discouragement.

Thus, the second conversation, this just with myself.

While I ran Lap One, I mentally scrolled through a too-long list of family and friends in a variety of tough settings.  Recent Christmas cards only added to this list of concerns.   Most were situations with little path forward other than just carrying on.  Tomorrow would look much like today.  Nothing was going to change rapidly; positive outcomes didn’t appear near or even likely.   They were just in hard places.   I ached for these people whom I knew well and cared about.

And it hit me in a strange way:  symbolically, the rest of HUFF was, for me, no different.   It wasn’t going to be a glorious race with a new PR or an age group award.   No one would notice if I carried on or not.  I would be alone the entire second lap.   It was cloudy and the course was getting wet and muddy.

So, if for no other reason than to identify with these people I love, I realized I needed to reload and get out and run the second lap.

A covid-induced course change allowed me to come within 30m of my car as I concluded the first lap.  I had laid out various supplies beforehand, so went to my car with a settled plan in mind and went to work.  I opened a banana and started eating while I pulled off my ankle brace, reset the laces on my left shoe, ditched the MP3 player and ear buds, swapped my knit cap for a lighter cap with a bill, drank a large amount of water with electrolyte and even shoveled down a homemade oatmeal-raisin cookie.   I grabbed a second banana to eat on the course, closed up the car and headed out with a new perspective.

Back on the course, I was completely alone, listening only to my footfall and curious as to how this would go.  I slowed from a 4/1 run/walk to a 2/1.   Two miles in, I noticed my ankle felt a little better...it seemed the abrasion of the brace was worse than any actual ankle discomfort.  By the time I hit the first aid station, I realized I was on for the rest of the loop.

And that’s how it went the rest of the second lap.   I never did really feel all that great and never felt smooth.  One of the great joys of trail running is the sense of “gliding” through the woods, up and down the hills, splashing across creeks and mud holes.   None of that happened at HUFF this year.  What did happen though was 3+ hours to reflect on the particular concerns of these many people, offering prayers for each of them, making decisions on specific things I might do for each of them to help, a little.   Just one stride after another, keeping moving, however slowly.   In doing so, I sought to empathize in a small way with each of these dear ones who were also slogging through far more crucial experiences.

With about a mile and a half to go, I was jolted out of my private thoughts when I saw my local running pal and work colleague Michelle about a hundred meters ahead of me.  I was stunned to see her. We drove separately to the race but we did meet up and talk in the starting grid. She’s had a strong fall of training and racing, is way faster than me and I fully expected she’d be half-way home by the time I crossed the finish line.   She was walking, fighting an undetermined leg tightness.  So, I walked with her quite a ways...it was nice to talk with a friend, though it hurt to see her hurt.   With about a half mile to go, she urged me to run to the finish but I told her I’d wait at the finish.

Around the lake, up the hill and across the finish line it was.  Michelle shortly finished.  No trumpets or fireworks for either of us but we finished the race. 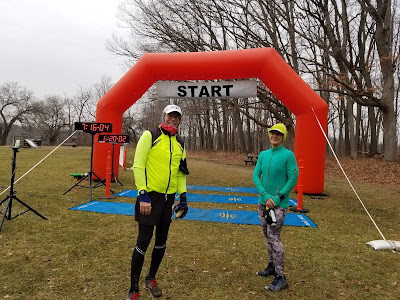 The silliest part of my HUFF experience this year was me thinking I could actually sleep in my car parked near the start.   Ha!!!!   While I certainly got a primo parking spot by showing up at 8pm the night before the race, I didn’t sleep.  Had my inflatable car bed remained inflated, it might have helped but neither the back of my SUV nor the driver’s seat, fully reclined, was an adequate bed.   I may have slept between 11pm and 3am but even that’s not sure.    Here I was, optimistic, before I tried to rest. 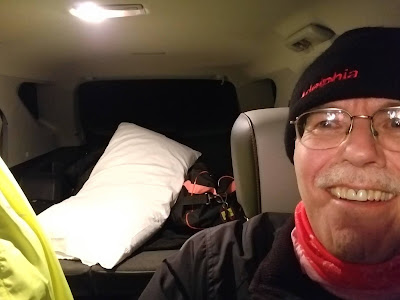 Nerd moment here, but those who know me will not find it surprising.   I knew I’d need to stay hydrated during HUFF yet I really didn’t want to carry a hydration pack and I did want to use my preferred electrolyte drink.   Plus, aid stations were understandably “light” and thus I needed to be responsible for myself.      My hack took shape when I looked closely at the course map and realized it crossed the main road into the park twice, roughly dividing the course into thirds.   So, as I drove into the park the night before the race (excited to sleep in my car...oy...), I stopped at each of the crossings and found a hidden spot to stash a 20oz bottle of fluid.  Worked perfectly the next day, as I could reload my 10oz water bottle I carried twice on each lap and stay well hydrated.  And, on the way out after the race, I picked up both now-empty bottles, leaving nothing behind.   The things I get a charge out of....

I went back and listed all my times for HUFF...Clearly “Each year the course is the same; each year the race is entirely different; you have to always adjust.”

That was so inspirational Joe! You are so right about the same course is different every year, even though this was just my 2nd time doing the 50K. Any "race" of any distance shares the same discomfort with about 20% to go, and THAT will never change, right? You have, and continue to be, one of the main reasons I have transitioned from road to trail running! Thanks again for sharing your thoughts on your difficult 2020 HUFF. You handled it beautifully despite feeling less that perfect. Have a magnificent 2021!

Nice work, Joe! It's strange to read a race report with other runners. Races have been virtual here since March with 2021 races already declaring themselves virtual with no in-person component. Glad to see you are healthy and running. Be safe!