In my second attempt to qualify for Boston in the last three weeks, I corrected several key errors from the first attempt and executed the plan well.  And a 35mph head wind over the final 7.5 miles just knocked the pace enough to miss the target.  Yet I was very encouraged by the day and learned very much.  I'll attempt to capture those learnings here.

The Wisconsin Marathon is a fine race, which I've run twice before ( here's the 2013 report but I didn't publish a report on the 2015 race...sorry) and enjoyed.  It's a flat course hugging the Lake Michigan shoreline, with much scenery and good organization.  When I laid out my running goal for 2016, it's execution was clear.  First, try to qualify for Boston at the Carmel Marathon on April 16 and, if that failed, reload and try again in this race on May 7.  As I detailed in my Carmel report, I messed up both race-day nutrition and hydration which cost me the shot at a BQ.  So, the plan for Wisconsin was to correct those errors and execute the same plan.

I took the Friday before race day off from work, had breakfast out with my lovely wife, mowed our lawn and then drove to Kenosha mid-day, about a 4 hour drive.  I carefully prepared the food I was to eat on race morning and had it all laid out before I left. 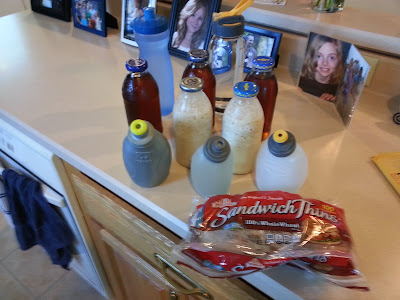 Chicago traffic was not bad and arrived in plenty of time.  Local running club pal Kate and her husband Eric were there, as Kate was running the first of a double.  We met up around 4:30 at packet pick up and walked to a local hot spot for some of the best burgers the three of us had ever had...here they are: 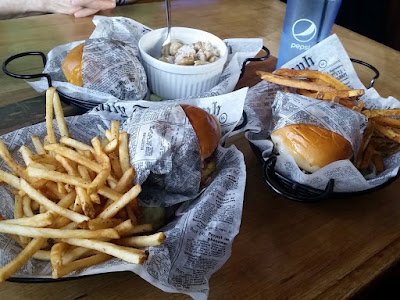 We wrapped this up by 7pm and I managed a decent night's sleep.  Up early on race day, I was parked and set by 5am.  It was beautiful to see the pre-dawn sky lighten over Lake Michigan. 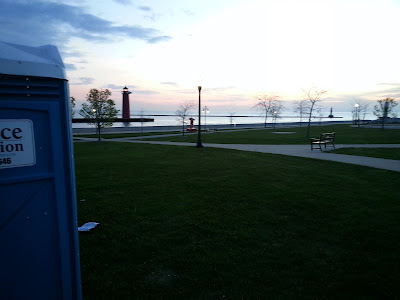 I executed the plan of a pair of turkey and cheese sandwiches two hours before the 7am gun...with a smile, no less. 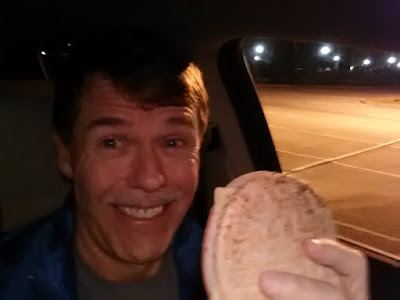 And then there's the weather.

As usual, I had been closely watching the forecast during race week.  Early, it looked good, with clear skies, temps in the mid 50s and modest winds.  By Friday, though, the prospect of thunderstorms appeared on the forecast.  The organizers sent out some cautionary notes.  Ultimately, the weather was uncertain, so we waited.

When I parked, I got out to walk and sense the weather.  The thermometer on my car dash said 68F and it felt every bit of that.  The air was heavy, with a small south breeze.  Having packed three shirts for the race (down from the six I've been known to pack), I was moving to the lightest of the combination.  By 6:15am, though, the wind had calmed but it seemed odd.  I left my car for good at 6:40am, and, belatedly, decided to take along a pair of toe-trimmed tube socks as arm warmers, just in case.

Something I've never seen before then happened.  In the 20 minutes it took me to make one last trip to the portables, the wind turned 180 degrees and picked up pace, straight out of the north.  The temperature began to drop and I noted major rain clouds now looming just west of downtown.  I got out of the portables just as the National Anthem began.  During the "rockets red glare", we saw lightning in the west, followed musically by "the bombs bursting in air" during which we were treated to thunder.  My mind wandered off of noble patriotism to ponder instead what the day would hold.

The gun went off on time and we would soon learn.  I tried to find my rhythm of early 8:43 miles, knowing the day's objective.  The wind was brisk from the right as we ran west towards town.  We then turned to meander thorugh town and got the first introduction to the wind for the day.  Between tall-ish buildings, the wind swirled and gusted and blew my visor off before mile 1 was done.  Stop, pick that up, get set.   So would the day go.

The first 3+ miles were in and out around town.  At mile four, we turned north and would so continue until a U Turn at mile 8.  The early miles were in the 8:40 range but as we headed north, they slowed to 8:55.  The wind was around 15-20mph at this point and we felt it.

I carried my handy, laminated BQ pace chart once more.  At mile 5, I was on track at the 3:51 accelerated pace.  By the mile 8 turnaround, I was a full minute behind that pace.  So striking, though, was the change with the wind at our backs, I began calculating what to do with it. 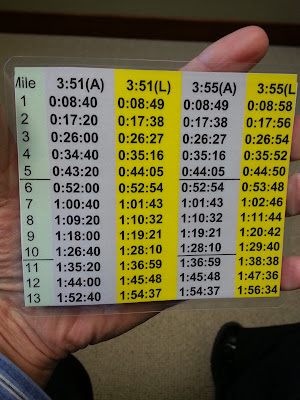 Knowing we would be going straight south from mile 8 to mile 18, I did the math to plan the pace I needed to pick up to compensate for the final miles back into the wind.  I was able to drop the pace to 8:35-8:40 range and it felt comfortable.  By mile 10, I was just 20 seconds behind the left column and held that through mile 15.  I didn't gain, though, as I hit the only real low spot of the race around  mile 12.  Just felt a bit "heavy".  So, I focused on getting more fluids and also taking some longer tugs on the home-made gel every mile.  That helped.  By mile 17, I was almost back to the left column pace.

Then, just before we crossed the Illinois state line, we did another U turn and pivoted back into the teeth of the north wind.  It too had found its "pace" during the 10 mile run south and was now steadily at 25mph, with gusts to 35.

The impact was immediate, on both body and mind.

What had been a very comfortable run now turned into a heavy slog, pressing into the oppressive headwind. Mile 19 was 9:03 and Mile 20 was 10 minutes flat.  Nevertheless, I hit the 20 mile mark in 2:55:30 the second fastest I've ever been through 20.  I felt fine but just could not make much progress in the face of the relentless headwind.  I knew I still had a shot at BQ but could I slog into the elements for the final 5 miles??

I tried, I really tried.  Rarely, we would get a brief shelter from the wind due to a building or a line of trees or a jog in the road.  When those happened, I could run very well, dropping easily to 8:30 pace.  Yet, back we went to the open space and vicious headwind.  By mile 23, I was barely at the 3:55 target time.  I tried hanging on to the few runners who were passing me; not drafting but just saying "Stay with the guy in the green shirt!"  While that helped, each of these runners were eventually beat down by the wind as well.

Instructively, it turned out, the course took a 90 degree right turn, putting the wind to my left, also sheltered by a long row of 3 story condos for the final half mile.  With a neutral wind, I found it easy to run hard again, finishing the race at a 8:25 pace.  Hey, I can still run!!  It was pure joy to stride out and make progress, passing fellow wind-blown marathoners, all anxious to have this one over.  While I had hoped to at least get under four hours, that too was blown away I realized as I approached the finish line.  Over the final mat in 4:00:46.  Marathon #64 in the books.

A friend of mine was announcing the finishers, he gave me a wonderful shout out as I finished.  He then popped over and we talked for 5 minutes or so...it's encouraging, after a race like that, I was perfectly fine in mind and breath to carry on a full conversation.

More than anything, I just wanted to get out of the wind.  I took some cheese from the finishers chute (it's Wisconsin, remember??) and some chocolate milk and headed straight to my car.  Man, did it feel good to get inside!  The temperatures had been in the mid 50s the whole race, quite fine, but the wind.  Wow.  Only then did I pull off the tube-sock arm warmers...how grateful I was for packing them and wearing them.   I called my wife and then received a call from long time running pal Darrell, with whom I had run this race a year ago.  What a treat to talk with both of them.

Donning a jacket and stocking cap, I walked back to the finish area for a few photos.  I then saw the effects of the wind.   A whole line of portable toilets had tipped over...no reports of them being occupied but, wow, does that speak volumes. 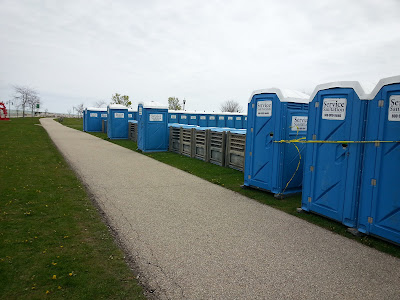 And you've heard of criminals "knocking over" an ATM?  Looks like the wind itself was headed for some time behind bars with this damage. 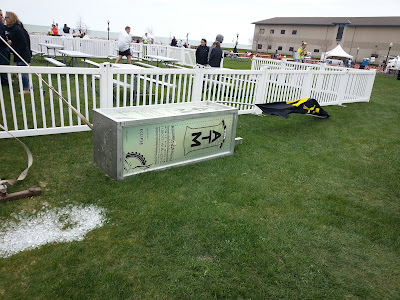 Coming around the corner, I was happy to see Kate, who had just finished.  We commiserated briefly over the weather conditions and Eric snapped a photo.  There is such a shared misery after races in tough conditions.   Kate went on to finish the Kalamazoo Marathon the next day, qualifying for Marathon Maniacs in so doing and certifying herself as an avid runner.  Her write up of both is here .  Worth reading if you want to learn how to truly persevere. 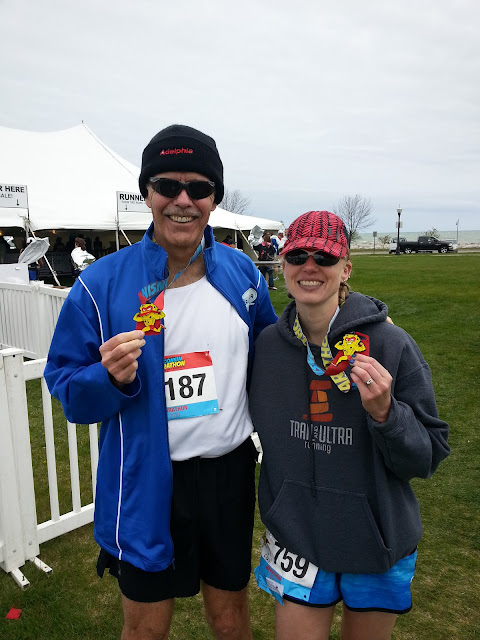 Overall, this was truly an encouraging race, despite not getting a BQ.  I corrected the errors I made three weeks prior, executed the plan and had gas left in the tank at the end.  I still think I can qualify for Boston, learning more in this event.   Yet, I'm not so far ahead of the BQ standards I can expect to get there without some cooperation from course and weather.  And the latter, as we know, is out of our control.   Next BQ effort will be on September 10 in Grand Rapids, Michigan. 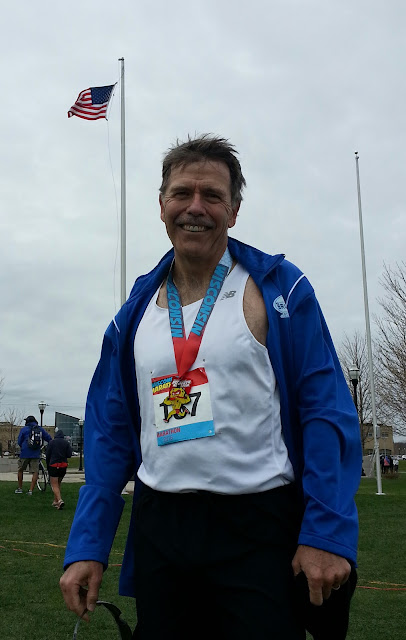 Thanks for reading.  Persevere, no matter how windy.

Man, oh man, the weather is such a factor in the marathon distance especially when something as significant as a BQ is on the line. Well done and all the best in your next attempt.

Today, 5/15, Tyler's fiance, Amanda, ran her first marathon in Cleveland and the weather threw everything at her, but she persevered.

Fantastic job! My favorite thing about this is that you learned from your previous marathon and were apply to apply those learnings here! It's tough when the weather is such an obstacle-- that wind sounds awful. But hey- you WON your age group! That's incredible. You will get to Boston!!!

Good to read the report, Joe. And I truly hope you can get the BQ time in September.