The second running of the Circular Logic Marathon on March 23, 2013 would have to be classified as a success.  It's fascinating for me to be a Race Director rather than a runner!! We had our full target of 103 individuals and 23 marathon relay teams begin the race.  95 individuals finished the marathon as did all 23 relay teams.   We got a beautiful day in the midst of a bad stretch of weather.  We covered our costs.   Feedback on race day and since has been overwhelmingly positive.  The result is we seem to have found a way to hold a simple, low cost marathon which runners enjoy.

On a long, cold, grind-it-out, twenty-mile training run in January 2011, the idea first hatched in my brain for an early-spring marathon in Indiana which would be simple, low-cost, runner-centered and fun to run. With the backing of our local club, the Wabash River Runners Club, this germ of an idea evolved into the CLM and we put on our first race in March, 2012. Our original intent was largely one of curiosity, to see if anyone would show up for such a race. Amazingly, they did, more than I even dreamed. So, we tried to improve things this year. I worked through the summer and fall to make the course a little more runnable and getting USATF Certification of the 1.000 mile loop plus our 385 yard extension we run on lap one.

We opened registration at 7am, November 1 and had a third of our field of 105 runners filled by 9pm that evening. We filled the field on December 5, at which point folks began joining our waiting list. People had to drop out due to dissertations, injuries, travel, pregnancies and 2nd cousins' surprise weddings. This opened up slots and, ultimately, everyone who wanted to run the race ran the race with our last two additions getting in the Tuesday of race week.

I took Friday off from work and worked like crazy all day to get set. We had a real improvement by doing advance check in at our local running store on Friday night. About a fourth of the field checked in then and that helped the cause.

Race Day, March 23, 2013, dawned cold but with neither the bitter wind we had the day before nor the heavy snow we had the day after. Our early volunteers were on site by 6:15am. The remaining runners checked in, emerged from the warmth of their cars just before 9:00am and assembled at the start line. We had just enough time for the obligatory Marathon Maniac photo. As MM #1228 myself, I was thrilled to have such a large proportion of fellow Maniacs in the field.

Once again, we had a participant perform the national anthem...this year two young relay team runners from Chicago on the trumpet and saxaphone. That was a treat. We also have photographic proof here of my proper anthem etiquette. 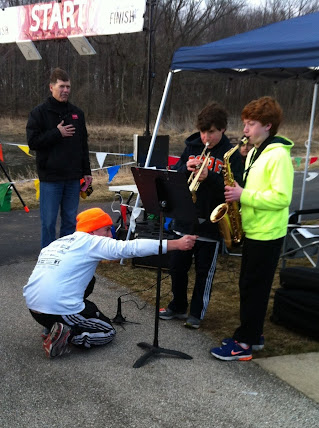 Precisely at 9:00am, we started the race.  As the Race Director, this is an amazing moment when all the hard work of preparation culminates in the word "Go".

Early in the race, I shot this short video of the NE corner of the course, the key improvement over the 2012 race and the spot we had to carefully measure to make the loop exactly 1.000 mile. You can see the cones which ensure this. Sorry my camera conked out 23 seconds into this!

As some of you know, a unique aspect of CLM is our litter free water stop.  A loop race lets you do this.  We posted this short instruction video beforehand on how to prepare and mark bottles.

And our runners did this marvelously!!!  In the 45 minutes before the start, the tables gradually filled with a wonderful menagerie of water bottles of all shapes and sizes.  We had some extras for those who might have forgotten but didn't need many. 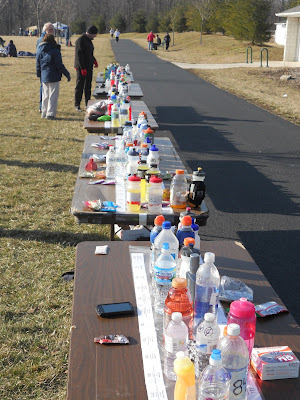 Each runner had his/her own slot marked on the water tables lined up by bib number.  We printed their name and hometown as well...part of trying to make the race more personal. 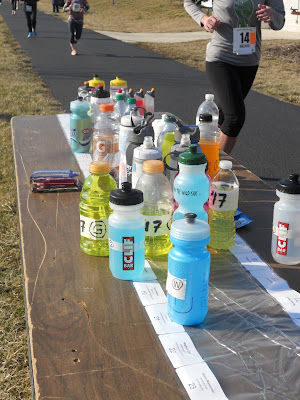 In some respects, organizing a race is a bit like building a clock...you do all the work ahead of time and then start it and let it go.  If you've done a good job, all the parts move the way they are supposed to and things just "click".

And, for the most part, things really did click.  The mood of our runners was wonderful.  With all of us spending the entire race on a single loop in a single city park, people got to know each other better.  Each runner had a second bib to put on his/her back with name and home town.  This added to the personal nature of the day.

One treat was our relay teams.  For example, Mark Acher, an officer in our club and a USATF coach, organized three teams of middle school kids from a local Junior High.  They ran one mile at a time, with most kids getting three laps in for the day.  Their teams finished with total times of 4:01, 4:13 and 4:29.  The kids and their parents formed a wonderful cheering section for everyone.  It was cool to have these kids running, shoulder to shoulder, with fast runners, old runners and middle-aged sloggers.  It captured much of what the running community is all about.  I hope it was a memorable introduction to running for the kids.

Other relay teams set up "shop" along the course, with blankets and chairs and this justs helped the entire atmosphere.  The team arrangement was also moving, as this was the first race experience for members of several teams.

We have over 600 race photos posted here, free for anyone to save and use as you wish.  I have a small handful of my own pix here. They capture much about the day.

And we did have a race!!  Jake Gillette won the race, leading every lap and finishing in 2:42:23.  His wife, Laura Gillette, led the women's division all day to finish in 3:09:26--she also finished third overall! (complete race results here) 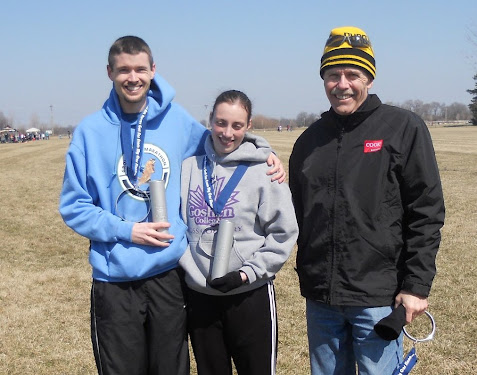 I first met Laura and Jake four weeks prior to CLM when I ran the Maple Leaf Indoor Marathon at their alma mater, Goshen College, where they were both track standouts.  They both won that race in February, a 204 lap event, in which Jake lapped me over 90 times and Laura 70 times!!  They are a delightful couple.  They also now have two young children; Laura gave birth to their second child just seven months before CLM.  Her performance so soon after delivering a baby is truly an astounding athletic accomplishment.  And, note to self:  If I ever coach a youth track team, I want their kids on my side!!

Many other friends and acquaintances were part of the day...too many to mention here.  I was very happy to see Pascal Radley, below.  He was ran the first CLM, then broke his ankle last November.  CLM was his first race post injury...we were honored he could make it back and thrilled he finished pain free! 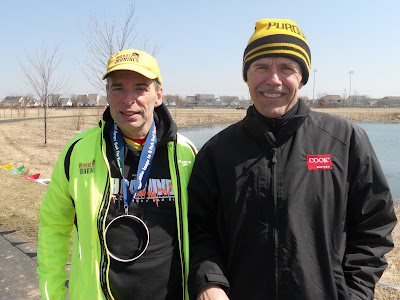 Was everything perfect on the day?  Hardly.  Our electronic lap counting had too many glitches on it.  While we resolved them for this year's event, it did not go the way we wanted it to go.  I'm already in the process of working that out for next year-it needs to be smooth.  There are further improvements we can make on our water table.  We could use a DJ or better sound system for the start and for music during the race. I have a list of things going already.

Yet, the race went well.  The tweaks we made over the summer to our course layout worked...they added a bit of speed and removed the worst hairpin turn from the 2012 event.  Having two bibs seemed a treat.  Folks really liked their own water bottles and, wow, did that clean up well post race!!

And we had one other tweak!!  Five runners in NW Indiana asked if they could save some gas and run a "Virtual" Circular Logic Marathon!!  I agreed and we gave it a go...they paid a small fee, got a T shirt and a medal and agreed to run 26.2 miles in a loop on the weekend we had the race! 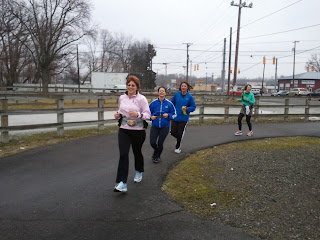 The five of them finished and had fun.  It was quite a hoot.

So, we will continue the event.  Next year's Circular Logic Marathon will be on Saturday, March 29, 2014.  We'll open registration on November 1, 2012 at noon Eastern.  At this point, I'm also thinking we'll be able to expand the field just a bit...details to follow on our web site.  Will we also have a virtual race??  Let me know if you are interested.

Mega thanks to our many volunteers, especially Mike Taylor who helped me in a gazillion ways pre-race and blew out his vocal cords cheering people on race day, and Travis Butts who took on the huge job of recruiting for and managing our water table.  The WRRC officers were real troopers and tolerated my geeky approach to this unusual race with amusement and humor.  And my wife is the best of all...she is of amazing support and encouragement.

Thanks to all our runners in 2013.  You are awesome.  I'm touched by the kind words you've posted on marathonguide.com.  We were honored with your presence.  To those of you thinking of running in the future, I hope this description is helpful-we'd love to have you if this race fits your style and calendar.

So persevere.  Even if going in circles.

Congrats on creating such a successful race!