Quick Summary:  Boy, can I put a race day in a bottle??  Seldom do all things, many broader than running, come together in a single day.  I got under 4:30 again when I was merely shooting for 4:40, had four (count 'em, four) marvelous conversations and did so with clarity and friendship.  It was a treat. 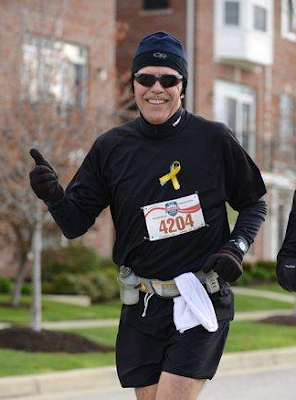 The Carmel Marathon on April 20, 2013 had numerous levels of interest.  Primarily it was the first race day after coming as it did only  after the tragedies at the finish line of the Boston Marathon five days earlier. As a result, the race had a unique mood, both sober and defiant.  I certainly felt that way.  While the arrest of one of the perpetrators the night before provided some closure, it still made for a very different marathon day.

All race week I thought about how to honor those who suffered so much.  One way was how I dressed.  While I usually wear my Marathon Maniac shirt in long races, I decided this day it was best to go all black, as you can see above.  The race organizers also passed out small blue and yellow ribbons.

In addition, I found a placard on line, which I laminated and put on the back of my shirt. 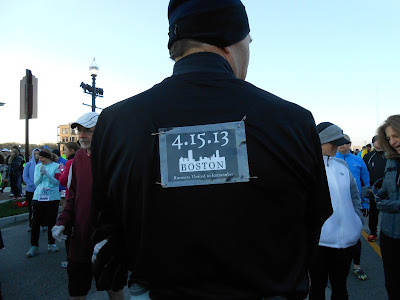 As did lots and lots of other folks, I discovered as we gathered. 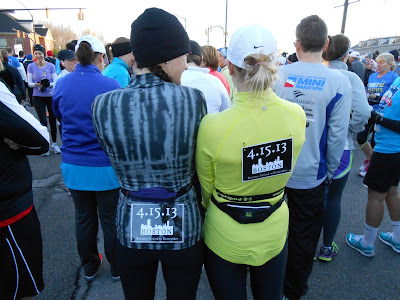 And so we got to the starting grid and I shot this video.

As we neared the 7:30am start time, it was fascinating to see the somber mood turn to one of defiance, saying we would not let others take away our freedom.

To the race itself...it was cold at the start, about 34F.  So, when the gun went off, I decided to just run easily for a while, just to get loose.  Miles one and two were in about 10 minutes each.

We made a turn just past mile 2 and I saw a guy with a Maniac jacket shuffling along and I pulled up alongside to say hello.  Lo and behold, who was that guy but Larry Macon.  Larry, as you may know holds the World Record for the most marathons run in a single year, as he ran 157 in 2012.  One of those was the Circular Logic Marathon, for which I'm the Race Director. While many greeted Larry as they passed by, I realized this was a wonderful and unique opportunity.  So I slowed to Larry's pace and ran all of miles 3 and 4 with him.  He is a very engaging guy and this was the first of my substantial conversations of the day.  We talked at great length about his story of running in Boston five days earlier. 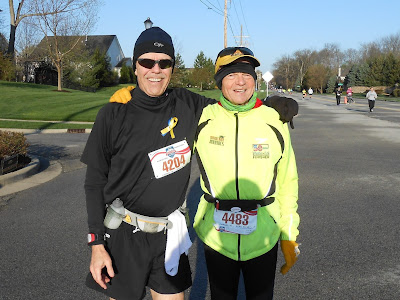 We covered other conversational territory as well, though.  Larry asked me a lot about my running, why I was an RD, how I organized the CLM.  We talked about amazing running experiences and how we viewed the growth and possible future development of the sport.  What an engaging guy.  And what a privilege to spend that quality time with him.

Just past the mile 4 marker, Larry urged me to carry on, so I bid him farewell and did so.  But the mere 25 minutes with him was inspiring and encouraging.

I opened up the pace in mile 5, going through it in 9:15.  It was not until mile 6 that I settled into my rhythm for the day, shifting into my usual run walk pattern.  I held a 4/1 from mile 6 through mile 15.  Most of those miles were at  9:50-10:05, which was very fine with me. I had stashed a banana at mile 13 earlier in the morning and that tasted really good.  Plus, it's always good for a laugh from fellow runners when I reach under a bush and pull out the  yellow fruit.

My thought pre-race was to shift to a 5/1 run/walk at mile 15, which I did.  Interestingly, though, this shift did not result in faster per mile splits.  From 15 through 23, my average pace was still just on either side of 10:00/mile. I clearly was running more slowly during the run shifts, but I only realized this after the race.

Around mile 17, I fell in for a while with this gentleman who had also run Boston earlier in the week.  He told me much of his story near Boylston Street.  He also had a Nebraska cap on...I queried that and learned we shared our native state. 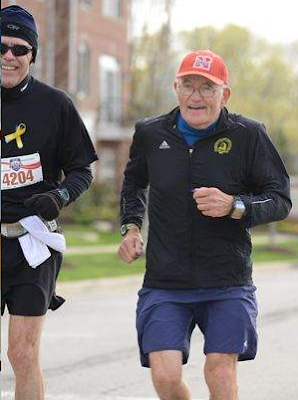 I carried on, enjoying a nice wheat roll handout around mile 18 from Great Harvest Bread.  My second banana got the requisite laugh at mile 19 from runners and spectators.  After the long west portion of the course, we made a left turn with 10K to go. 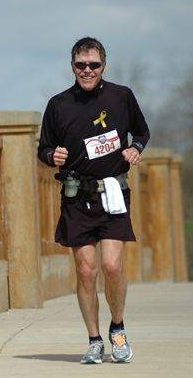 I began to do mental calculations at this point.  My universal pace chart had been showing me I was gaining on my projected end time.  I guessed at this point I would come home in about 4:33, which pleased me.  We ran into and around a park and by the mile 23 post, it looked like I might have a shot at 4:30.  Hmmmmm.  Do I go for it?  Even though I had come into the day quite happy to simply go under 4:30?  Do I lock into a run to the finish?

Darn right I do.

I leaned into the pace at this point (using the term "lean" very loosely, you understand, as if a 4:30 marathoner can ever "lean" into anything!!).   The situation required me to run the last 3.2 miles in 30 minutes...this seemed doable on this day, even at the end of a marathon.  I turned off my timer and ran continuously the final stretch.  Knowing the course after running it last year, I relished the right turn onto Main Street.  Down a small hill, up an incline, through the arts district and another right turn.  Half a mile to go, my watch was just past 4:25.  I had to focus and keep hustling.

Leaning a little more, I made the final right turn for the final 200 m downhill to the finish line.  I knew it would be close and didn't want to miss it for lack of effort.  Later, my Garmin told me that last half mile was at an 8:43 pace...well worth it. 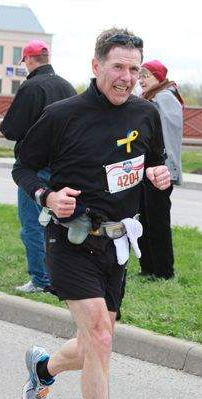 My wind came back quickly and none other than the famous Dave Mari was hanging around the finish line to take this photo for me. 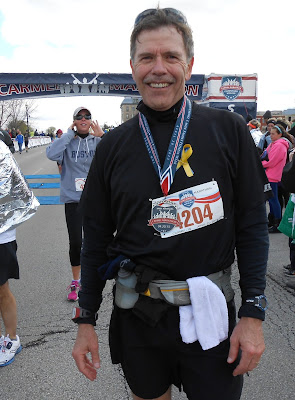 And then I shot this video with my thoughts on the race immediately after finishing.


The race was awesome.  But the day wasn't finished.  Some long-time friends had recently relocated to Carmel and we worked out a lunch after the race about 2 miles north of the finish line.  We met at 1pm and sat and talked past 3pm.  They are doing some remarkably innovative work in community development in the developing world, a topic of great interest to me.  Is there much better than a long conversation with good friends on subjects that matter??

Then, upon getting home, I had an hour-long race-plus-life debrief by phone with my nephew, running buddy and good friend John.  And THAT conversation was followed by another long talk with my sister.  Terrific people all.

Yeah, I'd like to put April 20, 2013 in a bottle.  But I can't...so this collection of photos and thoughts will have to do.  Which is why I blog.  It takes longer than post on social media but lasts longer.

Next up??  The Wisconsin Marathon on May 4.  I have a race plan based much on the experience in Carmel.  Will it work??  Stay tuned.

Persevere.  And take time for good conversations while you do.

Congrats on your sub 4:30 finish! Nice job taking it in strong. I've also had the pleasure of running with Larry and he is an interesting guy. Thanks for keeping up your blog. I've always enjoyed reading your insights and seeing what you're up to.