Boy, was that fun!  The HUFF 50K was a treat of a trail run on Dec 29.  It was what a winter event should be...runnable, yet on snow pack, well organized and a fully fair ultramarathon.  The volunteers were terrific and it was a wonderful winter's day in the Indiana woods.

Not so Gory Details, with photos

In last year's HUFF 50K race report, I droned philosophically, trying to capture the lesson from such a hard day. Summed up, last year's race was not what I signed up for...the mud and water was so severe it was impossible to really run.

Relax, dear readers; this year's race WAS what I signed up for!  It quite simply represented a very good example of trail running.  So, I'll spare you lots of words and show the day via photos.

I drove up to the Chain O' Lakes park area on Friday afternoon and joined a lot of fellow runners and family at race check in and a pasta feed at the nearby Lutheran camp facility. 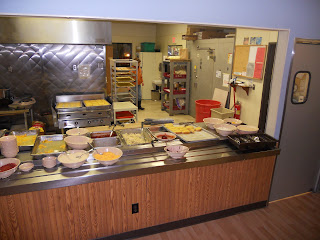 It was a great spread, enhanced by some nice conversation, always a treat.  I enjoyed meeting Mary and Jeff and their three boys...Mary is a fellow Marathon Maniac and that alone provides for plenty of grist for the conversational mill.  But we had a lot more in common as well.   I also jumped in and helped make a stack of pb&j sandwiches for the race aid stations to hand out...this is an ultra, after all. 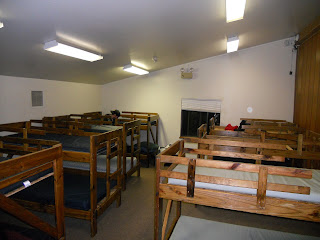 Did I mention it was a church camp??  Just like last year, I booked a bunk bed in their facility upstairs, which worked well.  I met Brian and had some fun chats.  Plus, only one of the other guys snored, so it was a decent night's sleep.

I was up at 5am, out the lodge door before 6am and drove the four  miles to the state park which hosts the course.  Scoring a primo parking spot just above the start/finish line, I utilized my 12V hot pot to prepare a hot oatmeal breakfast. 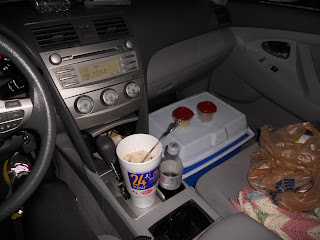 In an example of kaizen applied to running this year, I've figured how a recycled fast-food Styrofoam works as the perfect vessel to make oatmeal on the road.  Add a Diet Coke and boom, the breakfast of champions appears. 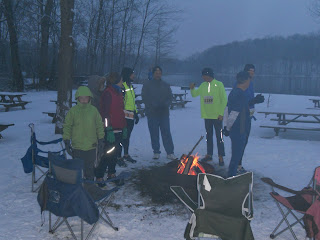 The starting gun was set for 8:00am, which is pretty much the same time as sunrise in late December here at the west end of the Eastern time zone.  With the temperature in the upper 20s and little wind, it wasn't bitterly cold but the camp fire someone started was still a nice treat before the start. 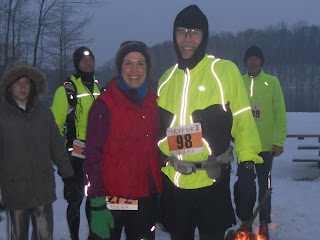 Mary and her family walked up as well and it was good to greet them again. 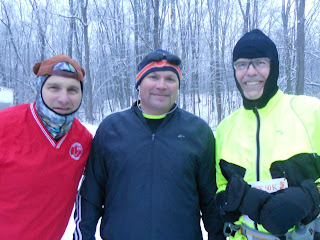 The one-loop and relay runners got started a bit after 8am and the  350 of us running 50K queued up.  It was great to see running buddies Walt and Brian, above in the back of the pack. 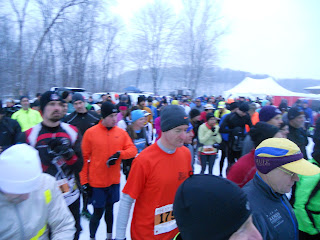 And we were finally off.  It felt good to get going. 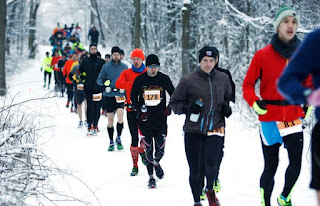 Snowfall for the week preceding the race was around 4-6".  So the trails were fully packed all day.  Most of the day was in the woods, but this is one of the few open areas. 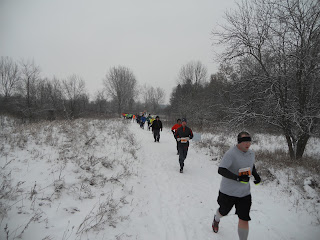 Five miles in, I was still feeling OK.  I guess that SHOULD be the case in a 31 mile race, right?? 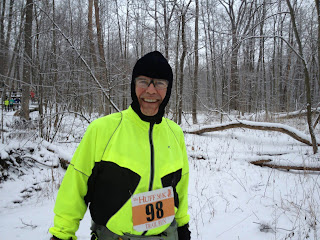 A topic of conversation all day was how different the course was from a year ago.  For example, this section, below, was a sea of ankle-deep mud a year ago. 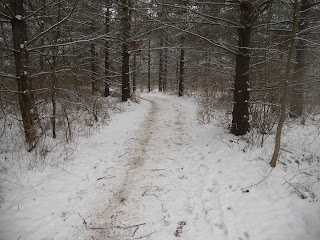 This year, we got through it so quickly I didn't realize it was over during the first lap till it WAS over...so made a mental note to snap a photo the second time through.  Full, enjoyably, runnable. 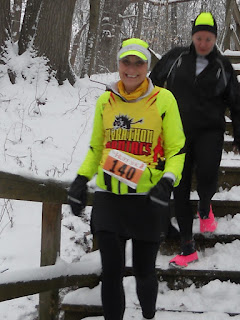 And more friends on the course.  Here's another Maniac from Indy...Elaine and I see each other at many Midwest races.  She's a gracious, friendly runner of continual good cheer. 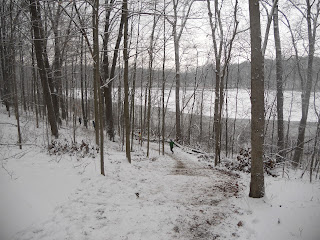 With a very runnable course, we could enjoy the views of the eponymous bodies of water which make up Chain O' Lakes State Park.  It was terrific...mere photographs don't do justice to the beauty of the day . 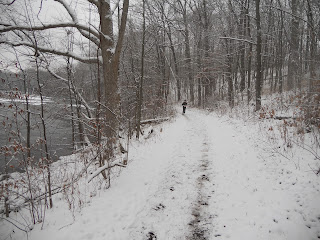 A fun moment came around mile 18.  A guy running next to me turned and said "Say, aren't you Joe?"  Amazing!  It was Robert, a guy I had met at this race a year ago when we shared the bunk room at the Lutheran camp.  He reminded me I had given him a plastic bowl for his oatmeal a year ago and he remembered it and remembered me!!  It was a treat to see him again!!!  Thanks, Robert!! 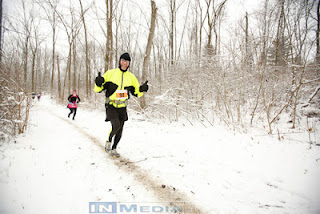 Doubly nice was the gentle snow which fell for the last 10 miles I was on the course.  It was almost poetic in the wind-free wafting of flakes through the woods.

The only fly in the trail-running ointment came around mile 25. 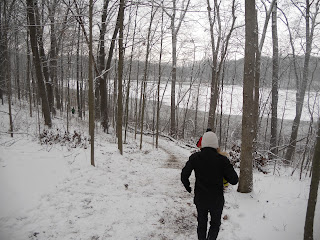 On a down-slope similar to this one, the slick surface plus sharp grade led to yours truly taking a very ungainly fall.  A real thud, nothing remotely graceful.  I jammed my left wrist and arm pretty good.  While I laid there, at least five other runners attempted to stop and help me get up yet slid on by, barely keeping their own balance so slick was the surface.  They barely stayed on their feet.  I sat there for a couple of minutes, inventoried the damage, realized I only has a sore wrist and collected my wits.  In the only break I took from my 3/1 run/walk cycle all day, I eased myself to the bottom of the hill, walked a couple more minutes, then resumed running.

Just beyond the bottom of the hill, I saw Tom again, a course marshal directing runners at a four-way course junction.  Tom was at this same spot last year and we hit it off then. 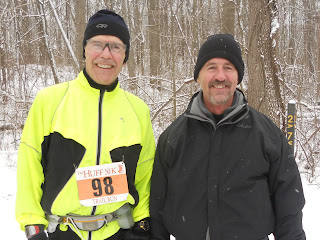 Tom obviously knows distance running.  I mentioned my fall and he mentioned a useful fix:  5/16" hex head sheet metal screws, 3/8" long, #6 thread.  Drive them into the bottom of your shoes and get grip on ice and snow.  Gonna try it this winter for training runs.  I could have used it this race, for sure.  I've never run on packed snow for this long...and this is the main lesson for me of the day.

I got back on track soon and the rhythm returned.  Around mile 26 or so, a professional photographer snapped our efforts. 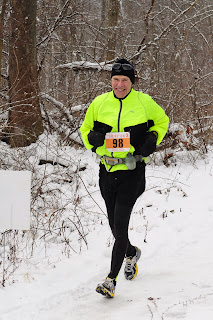 
From this point, it was just a few miles and one more lakeside trail to cover. 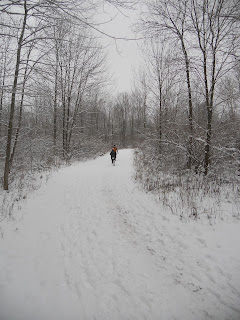 I was done.  And thrilled with the event...not a trace of the ambiguity of last year's run.

I crossed the finish line with Justin, from Cleveland.

He and I ran the better part of Lap 2 together.  We offered each other encouragement when we each needed it.  Late in the run, he really picked it up, terming it a "third wind".  I guess it's a long race when the second wind isn't enough!  It was great to congratulate each other.

Over the 17 years of the HUFF, the organizers have built a great system, including a heated tent and terrific opportunity to hang our with fellow runners.  I took full advantage of this post-race, meeting up with Brian again, seeing Mary's husband Jeff, plus a lot of the folks with whom I ran.  Robert and I talked further...he had struggled with cramps but persevered.  As did every one else.  Any ultra brings out perseverance. 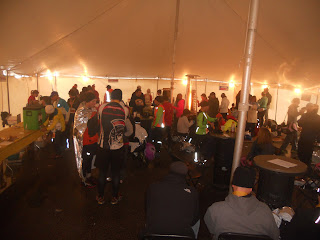 And did I mention soup?  A famous part of this race and wow, did they do a great job of keeping it hot all day in such cold weather. 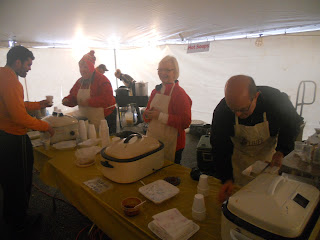 Friends met, race debriefed, dry clothes on, warm soup inside, I hopped in the car for the 2+ hour drive home.

And made one more nostalgic stop. 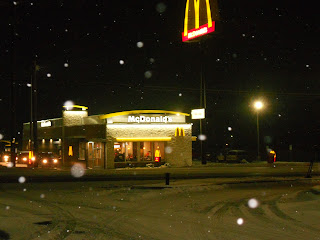 This is a McDonalds.  But not just any McDonalds.  It is a Micky D's in the town of Wabash, Indiana, just off of highway US24.  This store sponsored and served as the start/finish line of my first race ever.   The date was November 11, 1978, just over 34 years ago.  I had just started running and they hosted a 5 mile event which I ran in 35:32 (yes, I even kept records back then).  I still remember the T shirt, a baby-blue cotton number with a lithograph of an exerting runner on the front who appeared to be in great pain, which I wore and kept for years.  I was smitten by the   race experience.

So, on my drive home from my 6th ultramarathon and 34th marathon and longer race, my 121st race I have records for, I had to pull in, take a photo and be thankful for the good health and opportunity to run for all these years.  I still relish race day.

Hope you've enjoyed the photos of a fun race.  Persevere.

Glad the race was so much better than last year. Running in the snow is fun! Except for those slick spots, or course. Sorry about the fall. :( Happy New Year!

What a great race. I love that Justin was from Cleveland and the poetic snowfall during the final miles.

Congrats Joe on completing the Ultra!

Nice review. It was a beautiful day. Good to see you again, can't wait for Circular Logic!

Nice write up Joe. It was good talking to you again this year. Thanks for the encouragement as I was battling leg cramps the last 11 miles. I made it! Will most likely see you next year.