And now, a word from our Sponsor

It was great to see the sun this afternoon. The sun belied the raw sting of the mean west wind, however. Winter runs are something you just do and you find other ways to enjoy the time.

One point of enjoyment and awe was meeting, twice, six members of Purdue's track team. Boy, you talk about picking the right gene pool...each guy tall, rail-thin, moving gracefully and effortlessly. The first time I met them, all six were running hard but not at full speed. And they were flying. About 20 minutes later, after I turned around, they had too and obviously cranked up the pace. Three of them left the other three behind and were really running hard. It was awesome. I also smiled, as I remembered they were 19 or 20...I am 56. They are built for speed...I was a catcher and offensive lineman...built to squat and take up space. No need to emulate...rather to just look on in appreciation.

The other point of enjoyment was to realize I went out for an "easy 10." And I could say that, with a straight face. That never ceases to amaze me. I'm continually grateful for the mere opportunity to run. 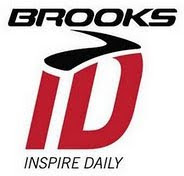 Which brings me to my other point and the title of this post. Last fall, I heard about a program Brooks offers called "Inspire Daily". In short, it's an effort in viral marketing in which Brooks connects with bloggers who will write about Brooks products and, more importantly it seems, wear obvious Brooks gear in races. I love my Brooks shoes and gear...shoot, I'm now wearing my tenth pair of Brooks Beasts, after going through about six pairs of Brooks Adrenelines before that, all in the last 5+ years. Way back in 1978, I got my first pair of Brooks shoes, the iconic Brooks Vantage. 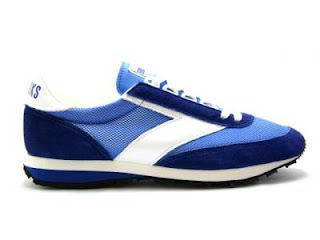 So I put in my application, not knowing where in the cyberbox it might end up. Amazingly, in early January, I learned I was accepted. So, now I'm a sponsored runner. In return for talking and wearing Brooks, I get a significant discount on their gear. And I get to participate in an experiment in digital, viral marketing. How does this business model really work?? I get to see for myself. 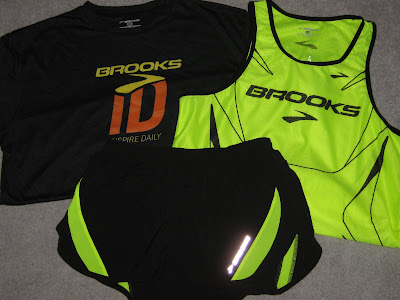 In the mail yesterday, as promised, they sent me my running gear. Some nice stuff, indeed. And the colors all line up perfectly with the other Brooks Nitelife gear I already own.

This is a long way from a NASCAR-esque type sponsorship, where I precede each sentence with "My 87 Chevy Army Pepsi-Cola car gave me a good ride today but..." Yet it might be fun to see how it plays out.

Email ThisBlogThis!Share to TwitterShare to FacebookShare to Pinterest
Labels: Brooks

Joe, I see some HS/college track guys out on the river trail every once in a while. When you see a pack of them moving along so smoothly it really is amazing.

"Winter runs are something you just do" This line cracks me up. I'm such a wimp getting out in 50 degrees in the dark after work. I really think its the combination of dark and chill that get to me because I don't mind running in a 40 degree morning. I really need my sun. Friday's lunch time 10 miler was so enjoyable.

Congrats on your induction into BrooksID. There is much buzz about it on Twitter. Many of the folks I follow have joined up. Its been Trance and Adrenalines for me for my running career. Makes me think I should throw my name in the hat as well. The switch to the Adrenalines was a big help in my last return from injury.

Going to try an run 18 later this morning. We'll see how it goes.

Congrats on getting into the Brooks ID program!

Being an Adrenaline girl since 2001ish, I've looked into it but haven't applied, mainly because I'm not that interested in wearing the clothes. I want to be able to wear my maniac shirt at marathons.

Found your blog via Wes'. How exciting to be sponsored! :) Nothing like free/cheaper gear to get a runner excited, huh?

Love your writing style. Made me smile thinking about those Purdue guys running "with" you. :)

Watching the "elites" run is absolutely run-stopping for gawkers like me.

Brooks probably prefers the temps stay cool so you wear as many articles of their clothing as you can bear to wear.

Joe, you've been a Brooke evangelist for a long while now, even if a quiet one. It's about time you were rewarded for your loyalty!

Congrats on joining the BrooksID team, it's my first time here too! I am still amazed when I look at race results and see that many 'older' runners beat me. I hope that I'll be able to still run when I'm that old, let alone fast!

..Still waiting on my gear though..