The last day of the year. Just a moment to reflect.

Overall, I was pleased with the year. Four marathons, two half-marathons, a 10K and a 5K. Fewer races than usual...better races than usual. Best news was no significant injuries. Yes, a wonky left knee after the Portland Marathon was a minor issue but was simply overuse. Paying attention to that has proven a helpful, long-term lesson.
Monthly mileage was sound. January and February were a step-back from late 2008...the pace was steady from that point. 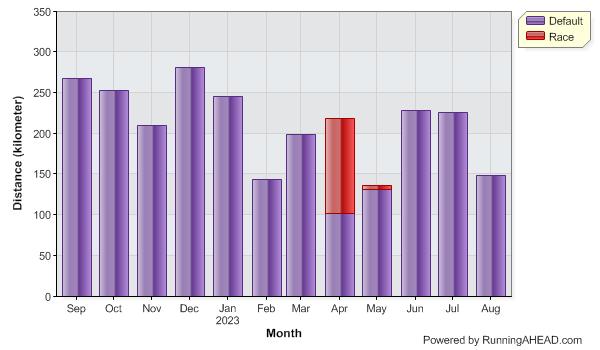 Stepping further back, I'm encouraged by the annual mileage. Since I started my current running era in 2004, this year was much closer the high mileage years of 2005 and 2006. By the end of 2006, I had some real ITB issues. I'm really pleased this year had solid, injury-free miles. 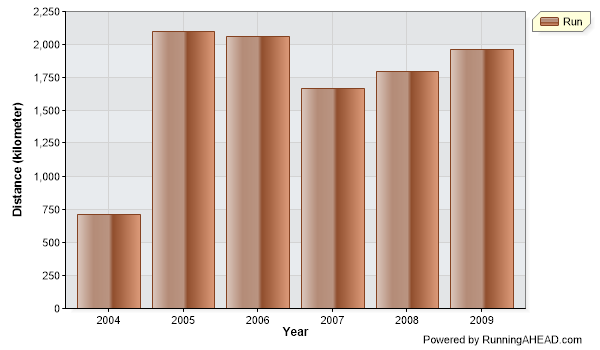 The best race of the year? Gotta think the Illinois Marathon on April 10. When your fastest mile of the race is the 26th, something worked well. The most fascinating race? Clearly the Heart of America Marathon. Hard to describe how much fun this small, quirky race was...even more so to share it with buddy Darrell.

We start the new year tomorrow with a 4 mile run along the Wabash River with our local running club. The race calendar is taking shape, nicely...I'll tell you about it tomorrow.

Thanks for persevering with me for another year.
Posted by Joe at 4:28 PM

Happy New Year to you and your family ,Joe. What a great year it was. I love the recap. I have a feeling 2010 will be awesome also.

It is always nice to see the mileage increase a little over last year, even better without injury.

another great year indeed. I can only dream of that running mileage.

You're on a good run of running. Getting older and smarter seems to be the secret of staying injury-free.

I don't know what I'd do if I could not run. Gotta persevere!

Looks like a good year, Joe. I'm looking forward to following your blog in 2010.