Man, it was nice to run in shorts in the sunshine this afternoon. My first outing over 2 hours since the Memphis Marathon felt really good; no pain, no twinges, just running long on a Saturday. Sweet.

A few weeks ago, while perusing an old file folder, I came across this little item of historical interest. February, 1993 must have been a terribly slow news period for our local newspaper. They put out a request to learn if ANYONE besides the Purdue basketball team did any physical activity during the wretched Indiana winter. I gave them a call and must have been the only respondent. A rookie reporter came to our office and interviewed me. This was the result...you can click on the image if you'd like to read the breathless prose. 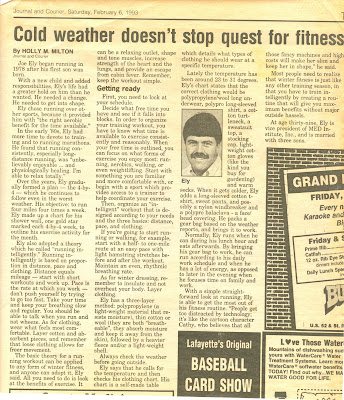 I think at least two people actually read this watershed report. It's funny to me in a couple of ways, 16 years later. One was I had a system, even then, to know what to wear for certain temperatures. Some things never change. Second is that the things I thought were important in both clothing and training then sound quite absurd now. At the time, most training programs had you pounding out the same distance, day after day; no emphasis at all on the weekend long runs. Tech fabrics were either non-existent or in the closet as a 1970's leisure suit. Some things change a lot. Unfortunately, my moustache has also turned grey since then.

It's a hoot to look at stuff like this. But at least I was running then. And am running still.

Persevere. And laugh at yourself; it's good medicine.
Posted by Joe at 5:35 PM

What a neat thing to have. Count on you to have a system! I like that you gave yourself gold stars. : ) Do you still do that?

I want to know what the cost of the prime rib is in the ad?

How cool. There is still plenty of good stuff in there. Especially the consistent routine part.

I particularly like that they hyphenated ot-her in the 3rd paragraph. that would be an English teacher's nightmare.

This is great!! I love the fact that they came out to interview you AND get a photo.

I can visualize the new triumvirate.. Galloway, Higdon, and Ely!

Gee Joe, you haven't changed a bit! That was a great article - I wondered how many you inspired? Either that, or scared them off with all the engineering type charts. Too funny!

This is a classic, Joe! Certainly much of your philosophy has remained the same. I could comment on the haircut, but then you'd have reason to spar back with your sister.... so I won't!! Nice article!

I died laughing reading the clothes to wear from your "chart" back then. Ha!!

Great article, Joe! You always have a logical plan, or at least what seems logical and doable at that time.