I took a shot at a BQ time on Saturday but 90F+ temps scuttled that plan.  Came back and ran the final third of a marathon relay on Sunday in similar temps and enjoyed it.


The Gory (and sweaty) Details:

I'm still keen on qualifying for the Boston Marathon.   The timing for the 2019 Boston is such that as of late September this year, I "only" need to run a 4:10 marathon to qualify.   Last summer, I set the plan for two serious attempts at a BQ this fall...the first at the Grand Lake Marathon  in Celina, Ohio.   It's a flat course, well thought of and only about 2.5 hours from my house.   I was in.

Running buddy Jon and I drove over on Friday afternoon, breezed through packet pick up and slept reasonably.   From earlier in the week, though, the looming concern was mid-day temperatures...it was predicted to be in the mid 80s by the time I anticipated finishing.  Would I still try to BQ?

I decided to give it a go and see just how far I could take the pace.   My aim was to finish at 4 hours even.  They had pacing groups and so I lined up with the four hour guy and off we went.   We started before dawn, it was cool and comfortable and I fell in easily.   In fact, it felt easy, wonderfully so, with very even splits through the halfway mark, which I hit at 1:57:02...nice, three minutes in the bank for a sub four, which I figured I'd need.

Around mile 15, about 9:40am local time, I could sense the temperatures really starting to rise.   By mile 16, I felt my heart rate suddenly go up.   That's not good.   I walked (having run almost all the time up to that point) and worked to get the HR down.   The day got warmer and warmer.  Obviously, the BQ was out.  So, I backed off and kept the powder dry for another day.

Crossing the finish line, I felt quite light-headed for the first time in the day.   I found some shade and just sat down for what was eventually about 30 minutes.  Very grateful for the organizers to have not only water but drinkable yogurt...I think I drank about 50oz of yogurt in that half hour and it made the difference.   Jon found me (he ran the half), and we left, showered and drove home.   It was a good race but the temperatures just kept it from being fast.

Jon and I met up and we were both "toasted"...you can tell a bit from this photo.  It was hot but we made it. 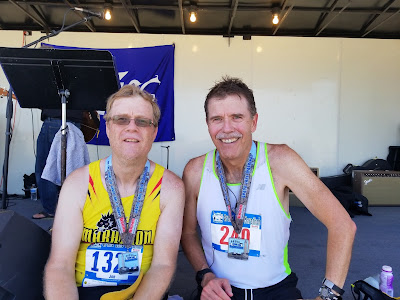 When I saw results later, I was astounded.   I ended up being


This is far better than I usually place...top third overall is amazing.   Such was the heat...I guess it was a reward for just finishing.

After a good sleep, I got up way early again the next morning and drove to Indianapolis for a race which has become a favorite of mine:  The Back on My Feet Marathon Relay.   BOMF is a cool organization which seeks to help homeless people in Indy through running.   This is a big fundraiser for them and is a blast.   On a 2.2 mile loop, relay teams run 12 laps to finish a marathon.

Jon and I had originally entered this to run as a two-person team, the day after Grand Lake.   Then, he had a vacation/family trip arise, so my work colleague and fellow engineer Michelle opted in to run.   She needed to get in 18 miles on that Sunday for her training plan ahead of the November 4 Monumental Marathon, so we agreed she'd run 8 laps, I'd run 4 and we'd have a run in.

The race started and I found a wonderful shade tree.   Michelle rolled by about every 23 minutes and we checked in and I went back to reading The Confessions by St. Augustine on my Kindle....it's a profound book. 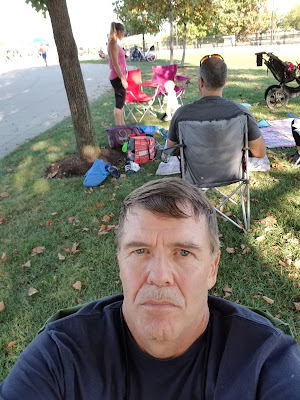 About three hours in, Michelle wrapped up her 18 miles and she handed off the baton. 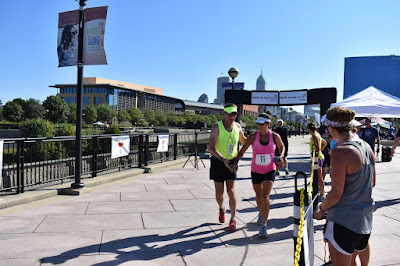 I wasn't sure how my legs would feel 24 hours after the tough run in Ohio.   I was stiff early, but half way through my 4 lap outing, I was happy to mug for the camera...as is my habit. 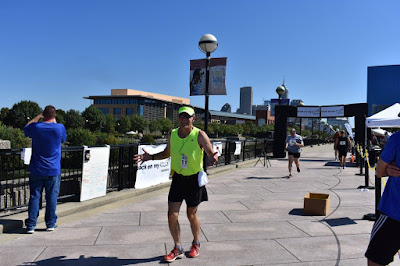 The run went quickly for me and as I came around to end our 12 laps, Michelle jumped in and we ran hard to the finish line, with her winning handily in our engineering sprint. 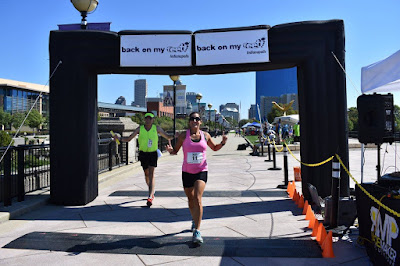 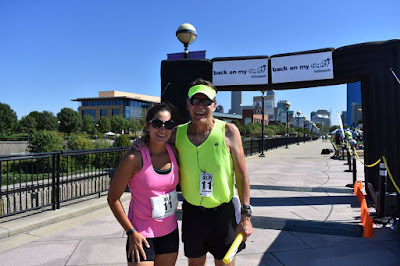 Interestingly, our laps were nearly the same.   The final time was 30 seconds different than my time on Saturday.  An odd coincidence.

So, a fun weekend of running.   Way hotter than anyone expected for late September.   But I got through it.

Thanks for reading.   And persevere...no matter the temperature.

Impressive choice of reading material as you waited!!

Joe, it was such a pleasure to run with you at BOMF. Thanks for a great day with great company. Clearly, I thought you were right on my heels at the finish line, haha! You were much more mobile than I was afterwards - kudos to you for the double race weekend. Looking forward to our next race.