It was a good year for running.

My monthly miles below showed more consistency than I've had in years past.  September was the only low month and that was due to a couple of overlapping tapers.  No injuries all year and some high miles in the first half of the year. 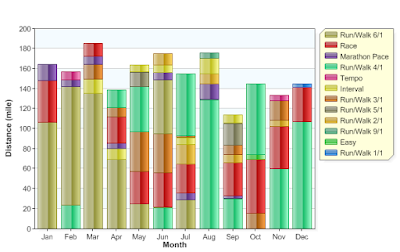 All of this totaled to 1,853 miles of running, an all-time best for a calendar year as you can see in the graph below.   I'm kind of amazed looking at this chart, frankly.   I've also logged 16,874 miles since resuming my running in the spring of 2004.


It's astounding to me to have run year-round for 13 years in a row now.  I've had only two injuries of note in this stretch.   Hope to keep it going.

Racing is fun, as always.  I ran 27 organized events this year, including one 50K, seven marathons and four half marathons.   Race day just never gets old for me.   I also continue to give back, as Race Director of the Circular Logic Marathon.   We held our fifth CLM and are getting set for the sixth edition on April 1, 2017.  Trekking to many races with local running pal Jon made race days even more fun.  I also had a first-time experience with an on-line running team through Running Ahead, which was a real treat.

I didn't hit my goal for the year, however. 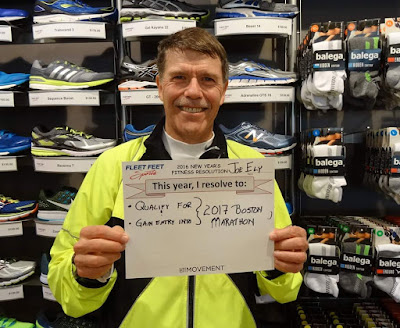 BQ was not to be this year.   I gave it three shots, at Carmel Marathon, at Wisconsin Marathon and then at the Last Chance BQ Marathon.   I came up 3 minutes short.   Then I took a shot for the 2018 Boston at this fall's Chicago Marathon.  On a perfect day, with a perfect course, I still came up 7 minutes shy.

What did I learn?

First off, BQ is tough.   No two ways around it.   I needed to find enough sustained speed to get there and didn't quite find it. Coming up short at Chicago was telling to me.   If I couldn't do it on such a perfect day, maybe it just isn't set right now.

I did the calendar and, as of October 2017, I get an additional 15 minutes on my BQ time for the 2019 Boston Marathon.  That's a 4:10 marathon, which suddenly feels very achievable.   Hmmmmmmm.

But, Boston notwithstanding, did I enjoy doing the miles this year.   A lot of miles. And I feel great.   Zero injuries, much enjoyment.   That's a good year.

A solid year of running for sure. The best part in my opinion is that you still are enjoying everything about it so much. I wish you continued good health and that elusive BQ. It sure would be great to run something together in 2017.

Joe, every outing with you, be it race day, lunch chats about running and non-running topics du jour, or whatever, are always great times from my point of view. I look forward to our many outings yet to come in 2017, starting with the Zoom! Yah! Yah! Indoor Marathon at St. Olaf College in MN in just a few days.

That's a fantastic year of miles! And it's truly amazing that you have been tracking this with RunningAhead for over 10 years. So consistent. I think 2017 is your year to BQ. And who knows, you may even hit the standard for your younger age! It was great getting to know you this year.