Summary:  My running buddy Jon and I had a terrific road trip to Milwaukee to run the Icebreaker Indoor Marathon Relay and Marathon on Jan 30-31.  We split the marathon relay on Saturday afternoon and I finished a solo marathon on Sunday morning.  A well-organized event that lets us run in the winter in shorts.  And I finally reached my age in marathons plus ultras, putting #62 in the books.

This is the third time I've run a marathon at this venue ( here's the 2014 report and then the summer equivalent from 2014).  I like the event . Many people have asked me just what on earth an indoor marathon is. I've tried to explain, but it's hard to imagine.  So, I was pleased to see a fellow runner produced this video which gives you a full picture of the facility and the track.


Jon and I drove to Milwaukee on Saturday morning, arriving in plenty of time for the 1:00pm start of the Marathon Relay. 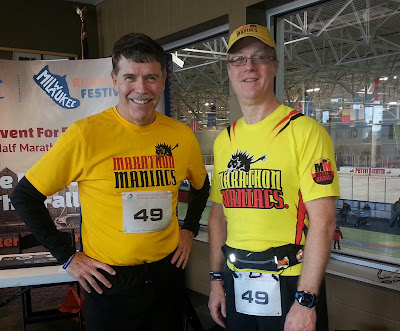 We dubbed our two-man team the "Miata Maniacs" as we both own the small Mazda two-seater.  A less certain decision was just how to split up the 95 laps for the relay.  Jon was coming off a leg injury and we decided to just play it by ear.

We set up our gear along the west turn of the indoor track and it quickly became apparent we were true newbies to this event.  Most of the relay teams had four people and had plans.  Some guys next to us were all engineers and had used blue tape to lay out their entry and exit plans for chip hand offs. 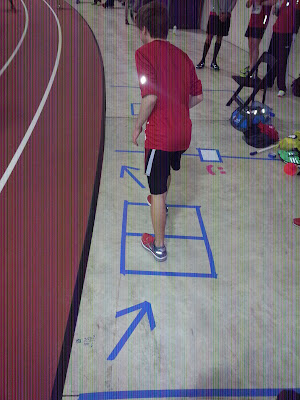 5S is a universal tool.

Anyway, Jon took the first shift running and fairly quickly we figured out that 5 laps at a time (about 1.4 miles) seemed to work for both of us.

The atmosphere in the rink was just wonderful during the relay because there were so many people there and so many people running fast.  The winning team was four track guys from a local college who combined for a 2:09 marathon.  It was amazing to run and see just how fast a 2:09 marathon looks, up close and personal.  It was further mind boggling to imagine a single person running at that pace (or faster) for 26.2.

We were more modest in our objective.  I did have my ubiquitous pace chart with me nevertheless.  Here's photographic proof I referred to it during the relay. 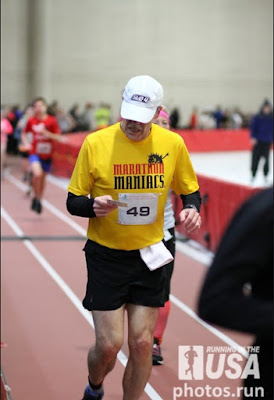 Once a geek, always a geek.

We kept the 5 lap routine going and then ran the final two laps together.  We finished in 4:30:47 and were not the last team on the track!!  It was fun.  Jon was quite encouraged he could run 13+ miles and hold up well, even with the injury.

By the time we finished, it was late afternoon.  We checked into a local hotel, grateful for the tasty snacks they gave us upon our entry, showered and got some supper.  It was up early for the marathon the next morning.

Jon had signed up for the marathon when we registered but chose, wisely, not to run as  he analyzed how he felt after Saturday's racing.  So, he found a good place to do some work for his job while I ran.  The 8am start time arrived soon enough, indeed.

Did I mention geek-ness??  Here are the two bibs I had for the weekend; 49 for the relay, 25 for the marathon. 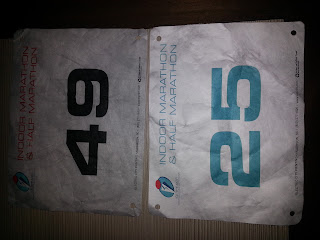 I always look for prime numbers for bibs.  Neither of these are remotely prime.  But Jon quickly noted they are both perfect squares.  And, he wryly observed, how cool is it for a geek to run two races on an oval wearing perfect squares?  Works for me!!

Just before the start, we had the obligatory Marathon Maniac pre-race photo.  While Jon and I had been the only identified Maniacs at the relay, it was fascinating to me that out of the field of 100 marathoners, a quarter of us were Maniacs.  But, then again, maybe you need to be maniacal to sign up for a 95 lap indoor marathon. 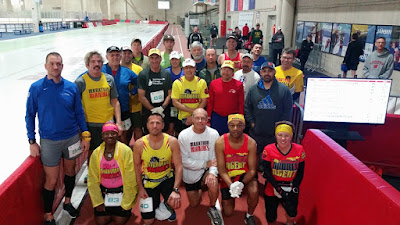 Off we went on time and the race pretty much took care of itself.  Having done it before, I knew the drill and quickly fell into a rhythm.  I chose to use the race as a long workout, using a 4/1 run/walk ratio through the first 20 miles and then to run continuously for the final 6, training my legs run harder when they are tired.
And the plan worked.

The RD of this event, Chris Ponteri, and his staff have this event nailed.  Each time around we came past the aid station, where a very enthusiastic group of volunteers took care of us by handing us our own water bottles. 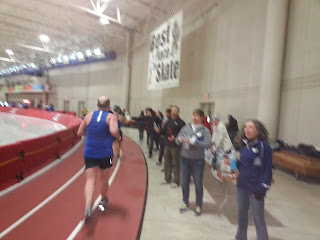 A really fun part of any well organized, loop marathon is seeing people over and over as you pass and are passed.  I had a number of very pleasant conversations, two of them with old friends. 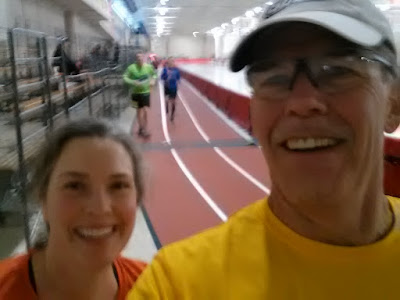 I've run a number of ultras and marathons with Mary Moran.  She's a very upbeat, disciplined runner and also a fan of numbers.  She'll be running the Circular Logic Marathon in April for the first time...what fun to chat all morning. 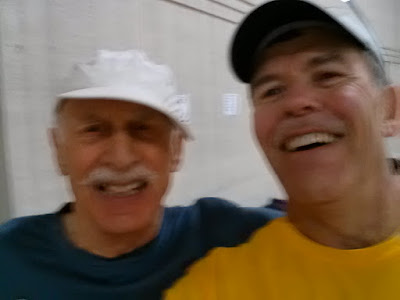 And when I grow up, I want to be like Roy Rubenstein of suburban Chicago.  Roy has run all 4 of the previous Circular Logic Marathons and, at age 79, just kept going and going and going all day at the Icebreaker.  He'll be with us again at CLM in a few weeks.   What a fun guy.

And you know those people who stand by the side of races with signs??  How do you keep that fresh for 95 laps? 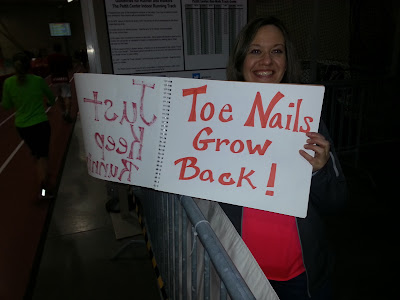 This lady really did!!!  She had a full, spiral-bound art notebook of hand lettered motivational signs!!  And I don't think I saw the same one twice, such was her creativity and scale of signage.  How cool is that??

A fun feature of this marathon-- it was won by a female!!  She beat everybody, finishing in 3:03, six minutes ahead of the fastest male!!  I chatted with her several times during the race and got to give her a big high five as she headed into her final lap...she was grinning all the way around.  This is the second time this winter I've seen this...a female won the Carribean Christmas HM in December, too.  It's terrific so many women run and run well. 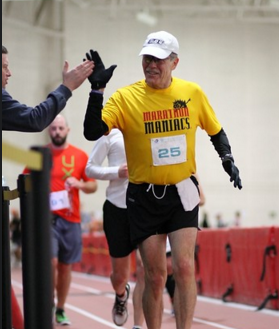 Here I am getting one of several high fives from Bill Schneider, the intrepid announcer of the Icebreaker races.  Bill makes the day, in so many ways.  He puts together a terrific playlist for the day, building on requests from runners from registration.  From Frank Sinatra to Mark Bronson, with everything in between, it's marvelous music.  I sang so much during the race, it wasn't even funny (truly, it wasn't funny, you should hear me sing....).  Plus, I did an air guitar duet to Pete Townsend's "Won't Get Fooled Again" anthem around mile 22 with a volunteer.  The mind goes slightly mushy in a marathon.

Bill announces when each runner has 10 and then 5 laps to go, but the announcement we all coveted most was for him to say your name and bellow "This is yourrrrrrrrr FINAL LAP!!"  In earlier races, Bill figured out I was a disappointed radio announcer, so in this event, he let me do the final lap announcement for another runner, while I only had about 17 miles in the bank.  But the treat of the day, as I finished lap 94, was for him to wave me over and let me announce my own final lap!   Small pleasures for small minds, but it was a treat. 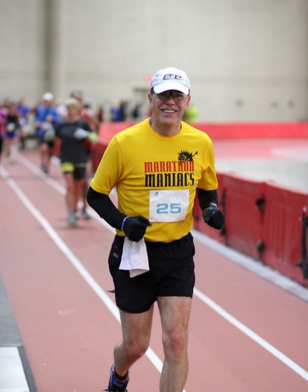 It's hard to express how thankful I am to be blessed with the health and lack of injuries to just keep running.  I appreciate good friends like Jon to enjoy this and the support of my wife who truly makes it all possible.

Icebreaker is a great event...I highly recommend it.

PS.  In mid-March, announcer extraordinaire Bill Schneider produced a 20 minute video of the entire event.  This gives a terrific flavor of the event.  And, around the 17 minute mark, you can see me make a leap over the cameraman shooting from floor level.

I ran this race a few years back and LOVED it. I can't wait to go back and run it again. The woman with the sign book is a genius. It sounds like fun to pair the marathon with the relay.