Overview:  In January, I set my 2015 goal:  a sub 4 marathon.  I made it, on this popular, certified course.  Training, course and weather aligned for a good day, that still injected surprises and major adjustments.  Goal accomplished.  I was very satisfied.

The Indianapolis Monumental Marathon (IMM) has morphed into  a huge event in eight years, with a stated 17,000 participants in the full, half and 5K this year.  It's a flat course, at the end of the fall marathoning season, just an hour from my house.  I registered on New Year's Day and this race became the year's target race.

Thus, I stated my 2015 goal publicly and went after it, adopting Hal Higdon's Intermediate 2 Training plan as the path.  Disappointingly, a calf injury in the late winter set me back, but I got rolling again in March and amped up the mileage through the summer.  Training went well, including two other marathons in Indianapolis five and three weeks before IMM.  The 50 mile weeks (thanks to Hal Higdon), hard runs and Yasso 800s combined to make me feel confident that this day might be special.

Race day finally arrived and the weather was perfect.  Start temp was in the mid 40s, there was a slight breeze of 7mph from the NW, which would be at our back for the final 10 miles, sunny skies, with no chance of rain.  I may never have more perfect weather for a marathon.

Running buddy Jon, work colleague Michelle and I carpooled to Indy, were in our parking spot by 6:30 and headed for the Indiana Convention Center which race organizers arranged to be open as a warming and stretching location, just a block from the start line. 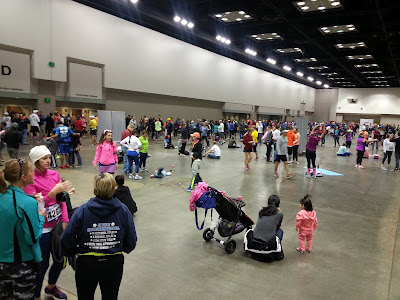 There, we met up with Cara and Chris, two other work colleagues.  Jon snapped this pic to demonstrate we were in fact all there. 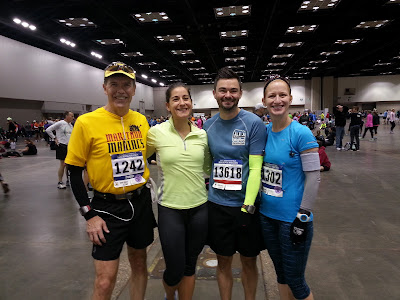 We headed to the start grid and it was a crush of people.  Knowing it would be crowded and that my Garmin wouldn't pick up the pace well while amongst the tall buildings of city center, I had planned to glom off the 3:55 pace group for the first couple of miles and then shift to my run/walk plan.  Yet, I could not spot them in the packed starting grid.  It wasn't until I turned around to face the flag for the national anthem that I spotted the pacing groups, all well behind me.  What to do?  But, by the time we got to the rockets red glare, I had an idea.

Indy's Mayor said "go" right at 8am and I tried to stay put and let the pack work around me, so the pace group could ease near me.  The grid though resembled a  New York City subway platform at rush hour.  I was basically carried along, unable to stay put to wait for the pace group.   Crossing the start line, I just tried to run comfortably, trying to find a pace by feel.  It was comfortable and, when we got to the Mile One marker, I discovered just how comfortable.  It was a 9:30 mile...yeow, I needed 9 even miles early to have a shot at a sub four!  I began to pick up the pace when I noticed, to my right, the 3:50 pace group.  Making a quick decision, I eased over and fell in with them.

I need to comment on pace groups.  I've never run with one before.  The main reason is my use of the run/walk in most races.  Secondarily, though, I've observed a lot of them and my sense (likely inaccurate) is that they waste a lot of energy early in a marathon with silly stories, cheers and chatter.  In fact, on the drive to Indy for the race, I described some of this to Jon and Michelle.

So, it was ironic for me to fall in with the 3:50 group.  I hoped to hang with them until the crowd thinned, which I estimated would happen by mile 4, at the most, and then go to my planned run/walk strategy for the day.  Mile two was better, at 8:45, followed by a 9:08 mile three.  Steady running with the group, in a still-crowded, curb-to-curb pack, there was very little space to run confidently.  There was no way I could stop for a walk break.  I didn't know at that point in the race what a wonderful running segment had started.

Two guys led the 3:50 pace group, Troy and Mark, if I recall correctly.  They did not try to be silly or entertaining.  They did prove useful guides and very, very accurate pacers.  The pointed out turns and potholes, announced the time at each mile, reminded us to relax from time to time and "run like a librarian"...i.e. smooth and quiet.  They traded off carrying the pacer sign each mile and were very, very consistent.

I found I was really enjoying the run.  And I do mean run...it was steady running, not the run/walk I planned to do.  Which was necessary as, mile after mile, the pack remained so crowded I simply could not pull off to walk without messing someone up behind me.   I carried my own water and energy gel, swigging water as I needed it and a bit of the gel at each mile marker.  Mile times were very steady:  from mile 4 to 13, the quickest mile was 8:33, the slowest 8:48, with most right at 8:44.  My chip time at the half marathon mat was 1:55:28, putting me in great shape for the sub 4 effort.  Our group never had any formal introductions, very little conversation but the non-verbal support and camaraderie was palpable.
Miles 14, 15 and 16 were 8:47, 8:58 and 8:44, respectively.   That run from mile one through sixteen was one of the finest running experiences I've ever had.

And then came this race's pivot point.

I had to pause at a water stop around mile 16.5 to reload my two 10 oz water bottles.  In so doing, I lost direct contact with the pace group and, though I tried, I couldn't catch up.  Clearly, my legs had fatigued.  I checked my pace chart and realized I was still in strong shape for my goal of a sub 4, so once again I had to quickly make an adjustment to the plan.  I switched to the 4:30/0:30 run/walk plan I had planned to use all day and proceeded to execute the race one four and a half minute run sequence at a time.

Just past the mile 23 marker, we made the significant right turn back onto Meridian Street and headed straight back downtown and the finish line.  I hit mile 23 at 3:29:30, which meant I had just over 30  minutes to run just over a 5K...I could surely do this, right?  But would it fall apart?  I hoped but did not yet know.  Instead, I focused on only the present, getting the next run sequence done well.

My mile 24 time was 9:44...I was clearly tiring.  I had to keep moving.  At the mile 25 marker, I noted my total time was 3:48:30 and, for the first time, I felt I actually had a sub four in hand.  Twelve minutes to run 1.2 miles??  Yeah, I could do this.  I turned off the run/walk timer and ran the rest of the way.  I did mile 26 in 9:19, turned the final corner and ran comfortably to the finish line, absorbing the fun atmosphere and fact I had achieved the year's goal and what was once a seemingly impossible dream.

Running pal Dawn Lehman snapped this photo of me about 20m before the finish line...it captures just how I felt as I got it done. 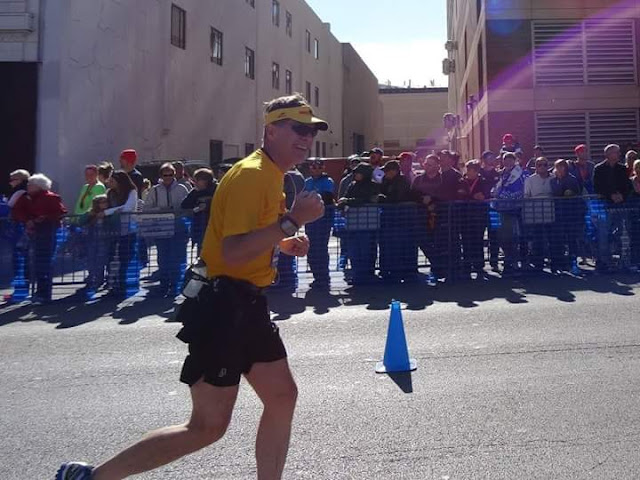 I hit the timing mat and it was done.  3:57:23 on a certified marathon course.  Amazing.  I looked and looked and smiled and was moved with gratitude to have this dream come true.  I felt great and was absorbing the moment.

Less than a minute later, I heard a familiar voice.  Cara had just crossed the finish line, meeting her sub 4 goal as well, in 4:59!   We looked at each other's watches and shared the joy of hitting huge goals.   It was terrific to share the joy. 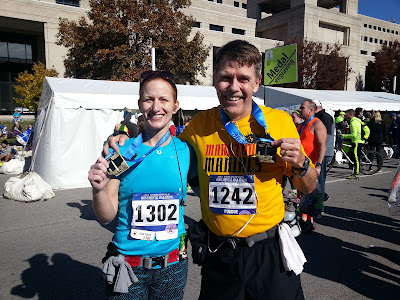 I picked up some chocolate milk and headed to the gear tent to get some dry clothes when I spied one of the 3:50 pace group leaders hanging out with some friends.  I was able to thank Troy profusely and discuss the race.  I was so happy I was able to compliment him in person.  He made a huge difference in my day. 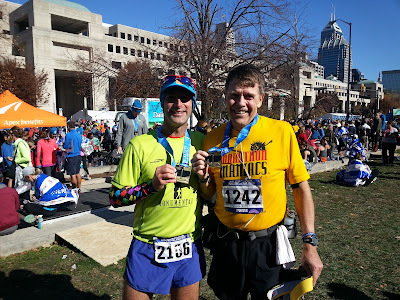 I then ran into a bunch of our local runners hanging out in the food tent.  It was special to see Greg and Dawn Lehman, owners of our local Fleet Feet running store.  I took off the Brooks Adrenaline GTS16 shoe I had purchased from them just three weeks earlier and, despite the odor, they both smiled for the photo.  My running pal Cory was also there and jumped in for the photo.  I'm deeply grateful for each of these folks. 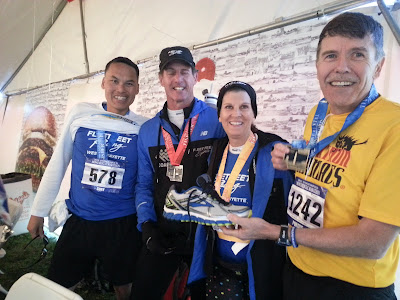 Shortly thereafter, Michelle came across the finish line in 4:15, a 50 minute PR over the marathon she ran in Carmel in April.  She was also thrilled!

I then checked my phone and saw buddy Jon was still well out on the course.  I knew he had some discomfort in his left hip and the day was obviously going slowly for him.  I donned some dry clothes and then walked back out on the course to join Jon and get him in.  It was terrific to see him coming slowly down Meridian, in pain but with real grit to finish the race he had been unable to complete a year ago.  He asked me to just start talking about my experience to help him take his mind off the pain, so I did.  He's a real pal and it was special to be with him over the final mile or so.  He toughed it out and finished, also achieving a huge accomplishment.  Michelle, Jon and I loaded up and drove home, each of us very pleased with how the day had gone.

I need to add one clarifying point.  Five weeks earlier, I ran another, much smaller marathon, also in downtown Indy, finishing in 3:56:02.  Isn't that faster than this race's 3:57:23?  Well, yes, but, as I mentioned in that blog post, that course was not certified and many of us found the course to be short.  That race was a massive confidence builder, to be sure, and a wonderful experience.  Yet, to claim a PR, I really want to have it on a certified course.  So, for me, the IMM becomes my PR and a genuine sub 4.

I'm still astounded to have achieved this.  I'm so grateful for how the training, course and weather lined up to make a peak effort possible.  I'm grateful for the support of my wife through all the training miles and race weekends.  Mega thanks to Jon, who has become a terrific running pal and confidant.  I'm very thankful for work colleague Mike who acted as my informal coach and sounding board.  I appreciate Hal Higdon making clear thinking on training plans public.  I could never have done it without all these and many more.

Several have asked what my next goal is.  Yep, there is one, but that will wait for another day.

Thanks for listening.  Persevere.  And pursue your own goals.

Congratulations Joe! You persevered and got that elusive PR....so happy for you!
-Cory