Quick Summary:  The North Country Trail Run on August 24 was a tough run on a trail that was simultaneously beautiful, diverse, hilly, unforgiving and full of roots.   I was thrilled to finish this year's race 18 minutes quicker than I did last year.  I did not enjoy tripping and falling 3 times vs only twice a year ago.

I signed up for this race over a year ago, before I had even run it the first time.  That's kind of an odd way to set up a race but, hey, I did it.  And having last year's experience done ( here's my 2012 race report ), I knew the drill.

I decided to camp out again and had a great time doing so.  That's my red car and small tent on the left of this photo. 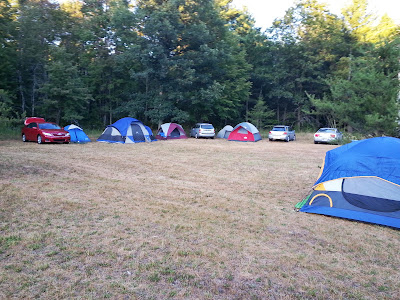 The owners of this small open area near the start/finish line were most hospitable.  Not only did we all camp for free but they also made a pasta dinner for all of us!  And, when they asked for a group photo, we complied.  Imagine having this many overnight guests in your back yard??!! 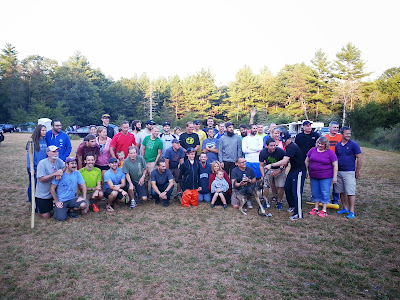 I slept well, very well, on a cool night, even having the obligatory dream I overslept and missed the start of the race.  The alarm at 4:45am let me know it was only a dream, though, and I quickly left the camp site and drove to the race start.  It was nice to have a full 2 hours at the start area to fix oatmeal, listen to Mac Powell and others, and take my time to get all the gear lined up for the day.  I also enjoy watching the race site come to life as the sun rises and people appear.

We assembled in the grid for the race and even got a few Marathon Maniacs together for a photo.  In the red shirt, on the left, is Pascal Radley, a running pal who is a regular at the Circular Logic Marathon, for which I'm the RD....and RD's are grateful for regulars!!  Pascal and I ended up running quite a bit of the race together. 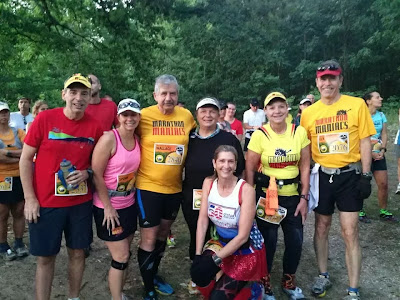 Just before the start, given we were in northern Michigan, we sang both "O Canada" and "The Star Spangled Banner", with true patriot love.  And we were off, right on time.

The run through the north Michigan woods was wonderful.  The trail was single track and it was tough to pass other runners.  It took about 30 minutes to shake out the field into similar paced runners which then let me settle into a couple of conga lines snaking through the forest at a comfortable pace.  While a few players came and went, I spent the better part of miles 2 through 14 with three young bearded guys from Grand Rapids.  They had trained together for this, their first marathon and it was obviously enjoyable for them to be together.  I feel like I got to know them and their families just by listening to their steady chatter. 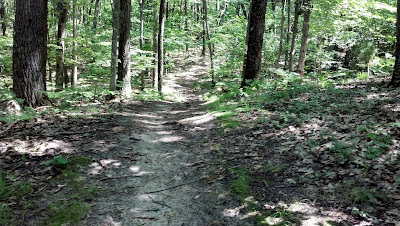 The aid stations for this race were terrific.  The organizers took the feedback they got last year and had each station well-positioned on side roads with good access allowing plenty of water and munchies.  It was a treat to have a couple of handfuls of fresh Michigan blueberries at each of the seven aid stations.  The volunteers were so helpful and just plain fun.

Around mile 15 or so, the conga lines broke up and we were all pretty much on our own the rest of the way.  The last 10 miles of the course were clearly the most challenging.  The course over these final miles was either up or down...no flats at all as we climbed up and down one ridge after another.  So, up and down we went, knocking off the miles.

There was one fly in the trail racing ointment for me in this race, though...trips and falls.  A year ago, I had a number of stumbles and twice hit the dirt.  This year, in a "PR" I didn't want to set, I went down three times, during miles 9, 14 and 20, besides having several near-falls, so prevalent and sneaky were the roots on the path. 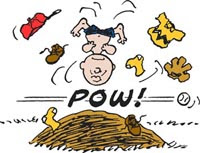 I felt like Charlie Brown taking a line drive back through the mound when I hit the deck, water bottles, sunglasses and running rhythm flying in every direction.  I was fortunate to land in some soft places each time I went down but that didn't have to be the case...in several places I could have just as easily crashed into a tree or stump or some less forgiving object.  I also personally saw five other runners fall during the race and heard of others going down.  One lady turned an ankle, had to walk for three miles before recovering enough to run again.  In a way, this is a risk in any trail run, I understand.  But this course seemed more trip-likely than any other I've run.  After the third time down, I acknowledged I just don't like getting knocked to the ground and it will have bearing in future race selections for me.

The course ended with a thrill, as just before mile 25, we made a long, sandy claw to the top of a ridge to a spectacular vista looking over the Michigan forest.  It was awesome...I wish we'd been able to "turn off the clock" and enjoy this view. 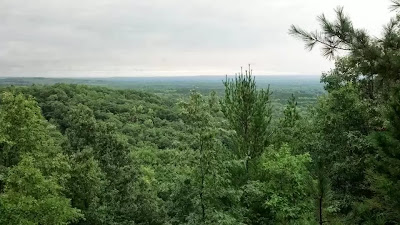 But, it's a race, so down we plunged to the end area.  While we had to run past the finish line and do another 3/4 mile loop in the woods to make the distance come out to 26.2, the race did end and I felt fine at the end.

I was thrilled to see my final time at 5:23:47.  Despite the hills and falls, it was 18 minutes faster than my effort on the same course a year earlier.  Marathon #40 was done.

Shortly after the race, I grabbed a photo op with my three bearded friends from GR...enough to make me think about losing my razor but any beard I would grow now would be quite white...guess I'll keep shaving. 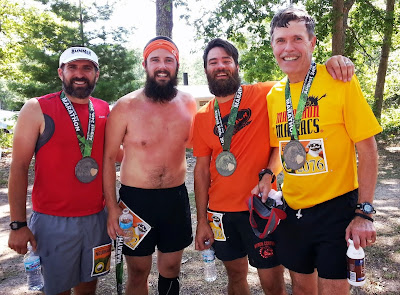 All in all, a good trip to get a late-summer marathon in the books.  And it is a good set up for the fall racing schedule.  At this point I have a 15K race on Labor Day, marathons on Sept 28, Nov 2 and Nov 9, a 30 mile trail race on October 12 and the HUFF 50K on the Saturday after Christmas.  Looking forward to it all.

Persevere.  Even when you fall.

Joe, great write up as usual. I opted out of this one based on your thoughts after your first trip through the woods there. Although it sounds like I may have my share of roots in Lawrence, KS. Good luck with your future race schedule.

Great job! I intentionally avoid trails. I have fallen in a road race. (granted, I was pregnant with an adjusted center of gravity) My dad still calls me 'grace in action.' Loved the race report and the great photos!

That's a great time for a trail marathon! Congrats on #40!

Sorry about the falls but glad they were soft landings. :)