Quick Summary:  It was great to be with running friends.  Icing on the marathoning cake was it becoming my 2nd fastest marathon.

This whole race emerged as a possibility early in 2012 when Darrell starting hunting for the next additions to his trek towards marathons in all 50 States.  Both of you long-time blog readers will recall Darrell and I first met in December, 2006 when I hosted his Indiana race.  We hit it off and have run at least one marathon together each year since.  For our race together in 2007, fellow blogger Wes joined us in Huntsville, Alabama.  We'd talked about all meeting up again and it all lined up for the Chicamauga Battlefield Marathon on November 10 in Fort Oglethorpe, Georgia, about an hour north of Atlanta.  Darrell clocked his state #24, Wes and his wife DeeDee welcomed us to their home and I got to run in shorts in November. 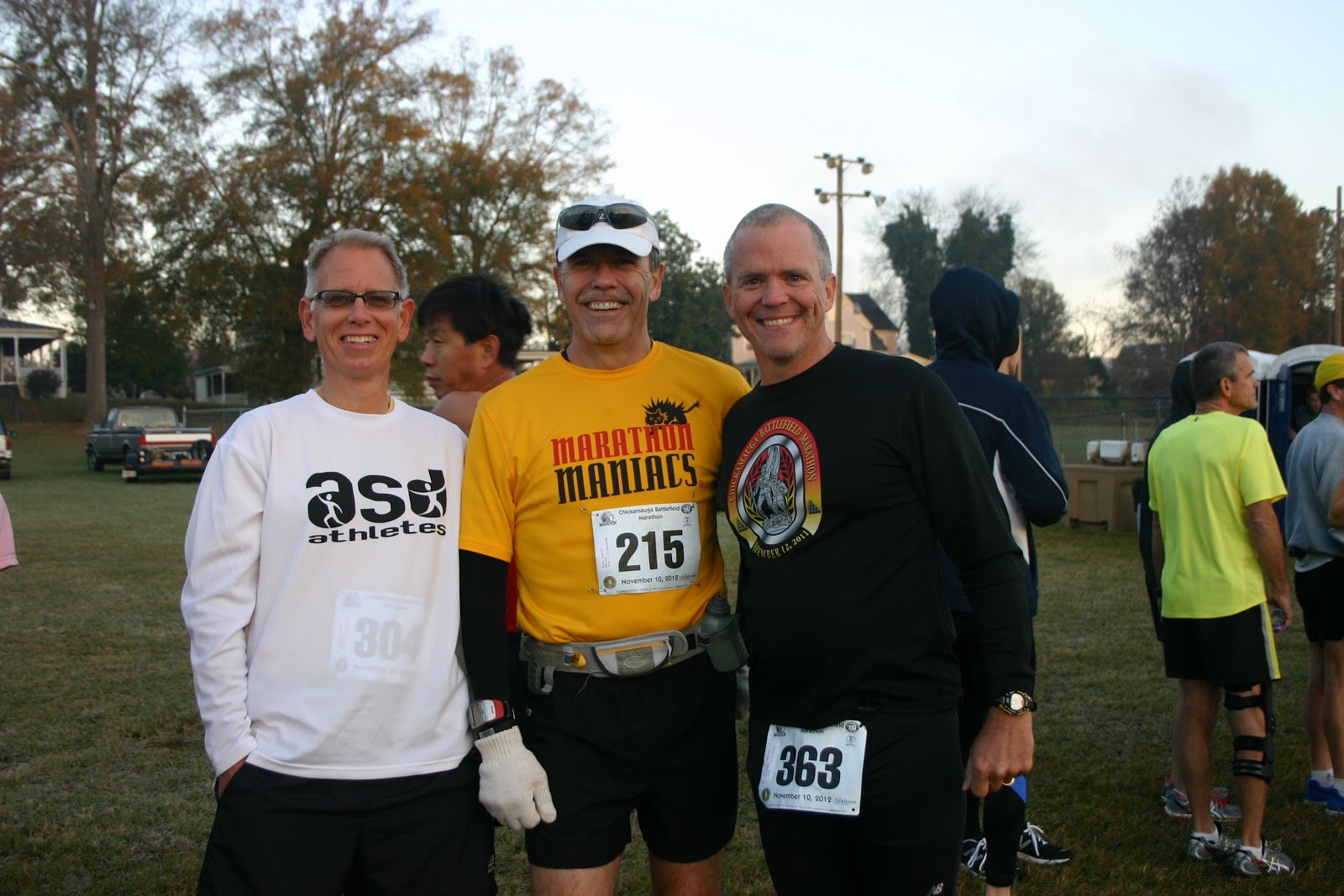 Logistics were fun.  Darrell priced all sorts of flights from Los Angeles, got a deal to fly into Nashville, which was on my way.  So I picked him up in Music City Friday afternoon, we drove on to Wes' house, started the conversations and were up at oh-dark-thirty on Saturday morning to get to the race site.  Wes had run this race several times and it is so good to have a local guide!  DeeDee joined us for the day with her keen photographic eye and thus all the pictures here are her high-resolution handiwork.

The timing worked well...we got through packet pick up, necessary ablutions and  were in the pack of about 1,600 runners just a few minutes before the race started.  DeeDee knew what to expect at the start and positioned herself precisely to see the Civil War replica cannon blast to send us off.  No photoshoping here, folks...this is a great picture and done with perfect timing!! 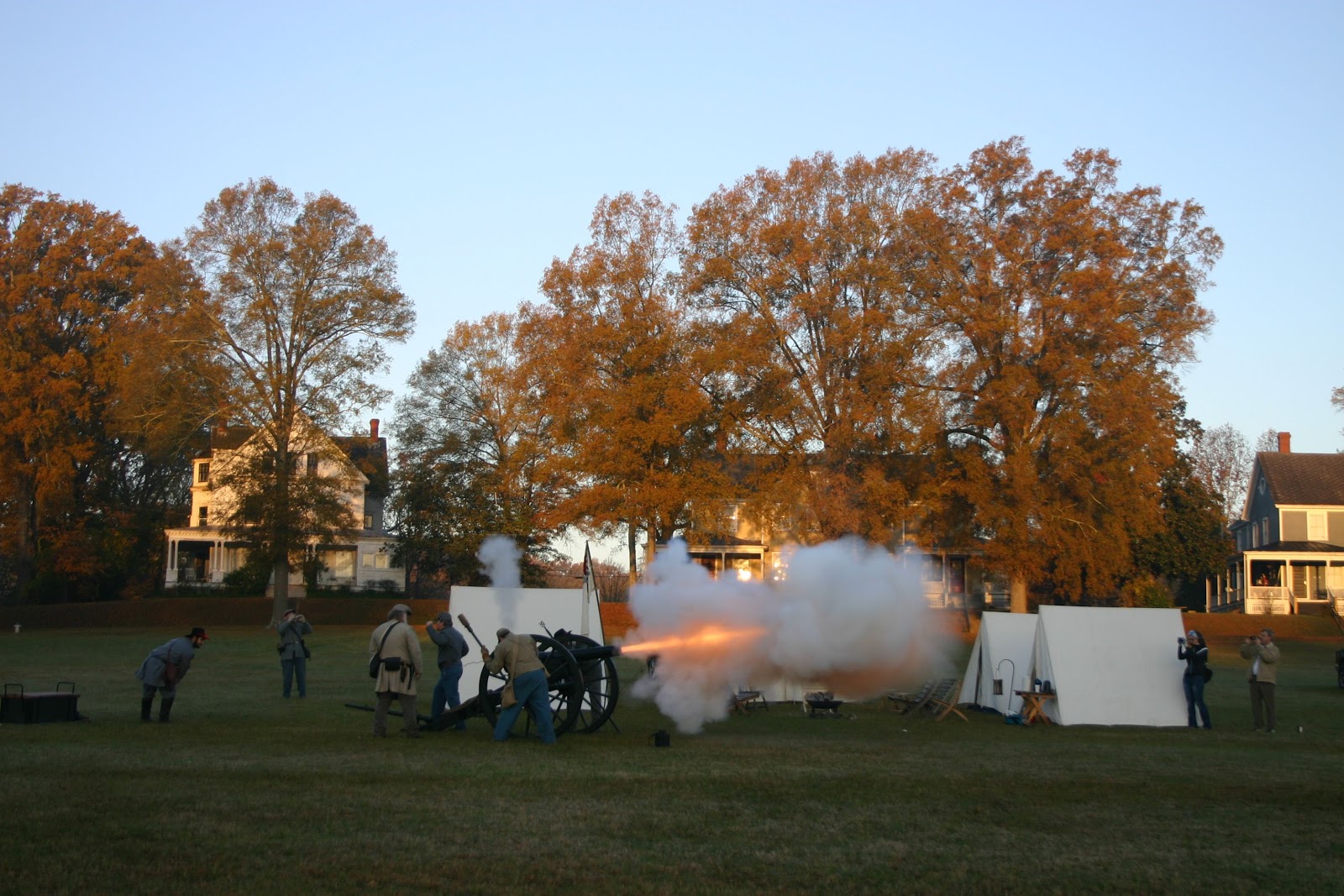 The three of us discussed just what our race strategy was going to be.  Since we are all very polite guys, we all deferred to each other for the better part of the drive from Atlanta to the race site.  We settled on a rhythm of running to each mile marker, then walking 30 seconds.  With such a plan, we rumbled off into the woods through the beautiful National Park though which this race winds.  The day was sunny and crisp, temperatures around 40 at the start.  The course was all asphalt with just enough roll to make it interesting.  The conversation was great and we were enjoying it to the hilt.  The early miles clipped by in the 9:20s.

At about mile 4.5, however, I began to sense in my breathing was quicker than I expect to see early in a marathon.  I mentioned this to Darrell and Wes; Darrell knows me well, took a quick look in my eye and realized I had settled the matter in my mind already.  We wished each other well and off they went.  I then settled into a 3/1 run/walk sequence and found my breathing back where I wanted it after a couple of cycles.  Of course, it meant the pace of 9:20ish for the first 4 miles was now to about 10:35 per mile.  But I sensed I was at a pace I could handle.

Through it all, I was really enjoying the run through the historic Civil War battlefield setting.  The Park was full of markers commerating the units from both sides who fought on this ground.  DeeDee got a shot to honor my current home state here. 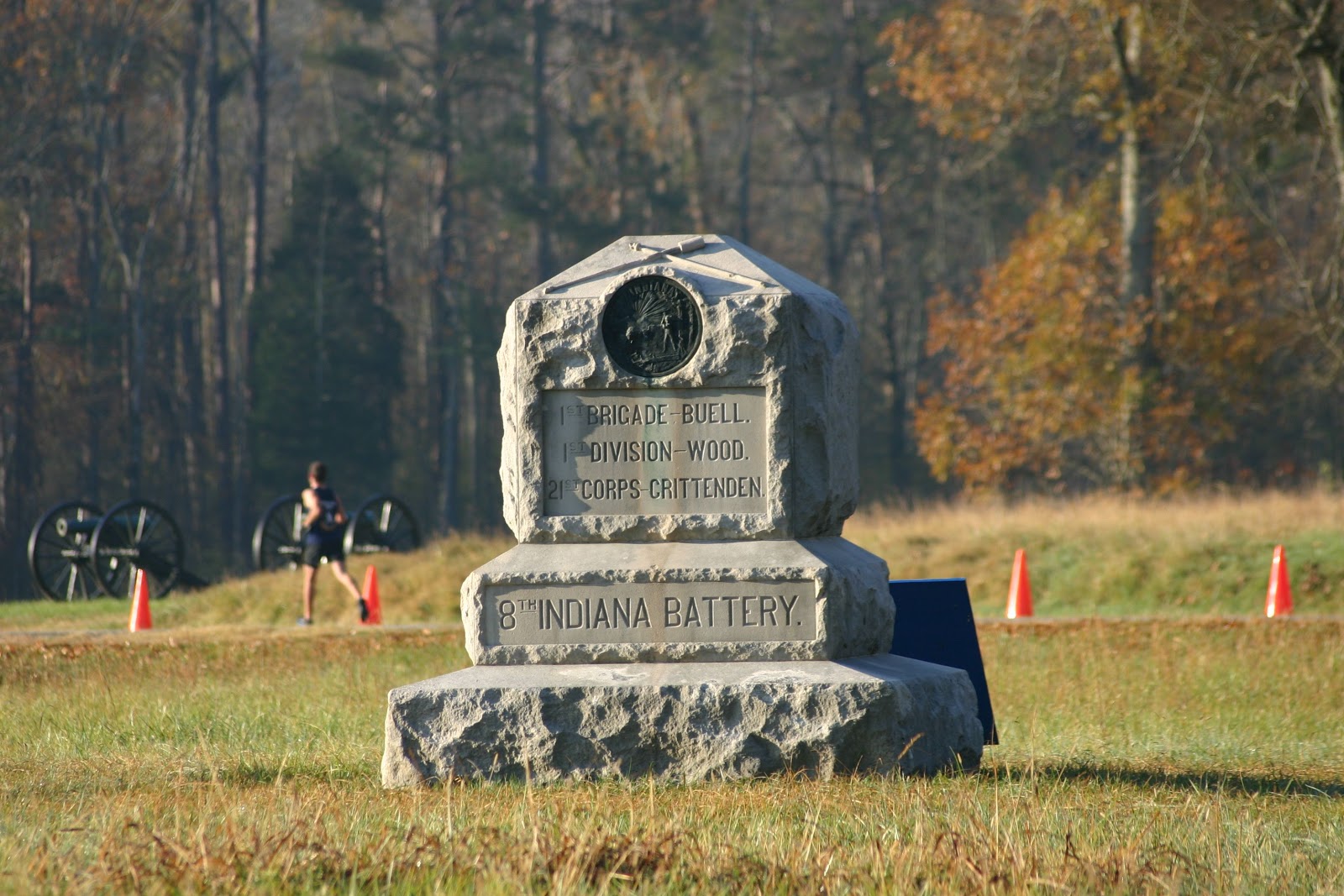 Around mile 8, I saw DeeDee by the side of the road.  She asked where Darrell and Wes were.  They should have passed you already, I replied.  She was dissappointed to have missed them, yet perplexed, as the field was well spread out by this point.  Just then, behind me, I hear the two of them shouting "How did you get ahead of us??"  We were all befuddled, remembering a slight detour a mile or so previous to add a bit of distance for the half marathoners, who zigged while the marathon course zagged and then met up again.  Much to their dismay, the two of them took the wrong route and added about a third of a mile to their day.  It happens...so we commiserated a bit and off the two of them went again, DeeDee snapping a photo of our better angles as we ambled off. 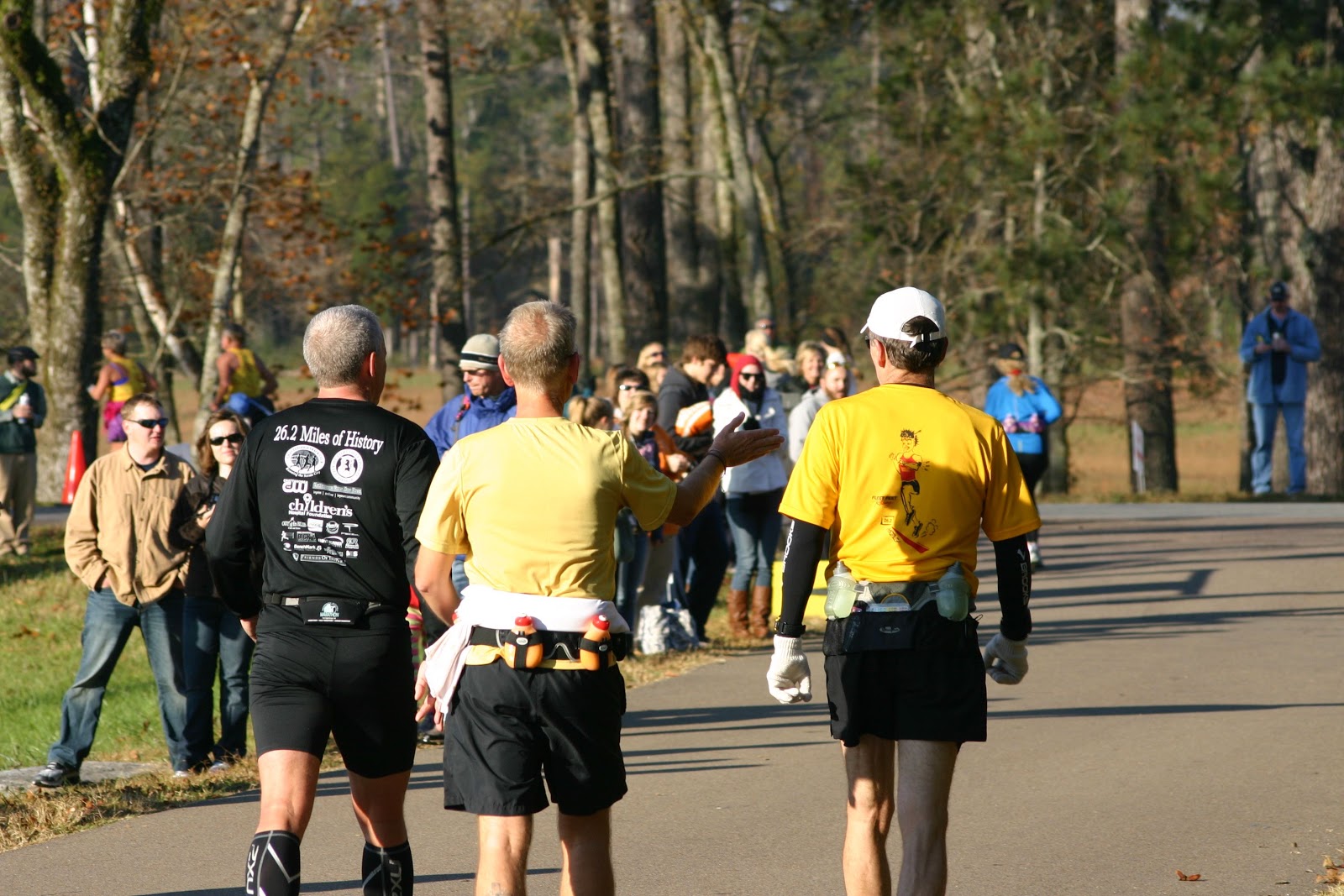 I continued with my 3/1 pace, just enjoying the day and feeling good.  The course was scenic and varied between wooded areas and open fields.  The sun was brilliant, there was no wind and it seemed like things were lining up for a good race. 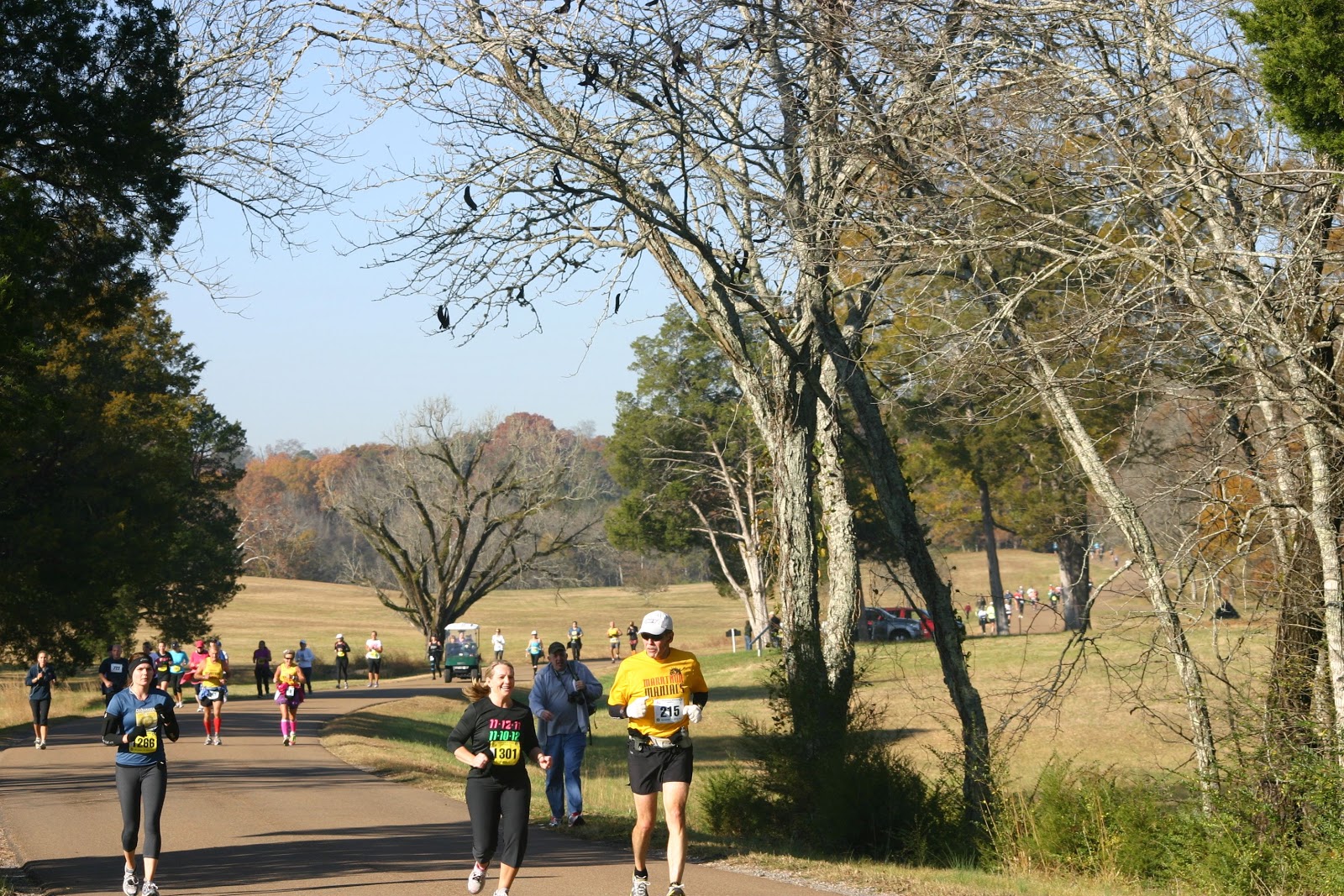 Typical scene along the route

As I finished the first of the two grand laps through the park, I decided to see if I could accelerate a bit.  After hitting the 13.1 timing mat in 2:12:40 (itself encouraging), I bumped my run/walk pace to 4/1 and saw my mile times drop to nearer 10:25.  I hit a wonderful groove.  And isn't it so interesting in marathons how the deeper you go, the more quickly the miles seem to click by.  Before I knew it I was at mile 16, still feeling fine.

About this time, I pulled out my universal pacing chart, did some math and realized I had a legitimate shot at going under four and a half hours for the marathon.  I had seriously wondered if I could ever get under 4:30 again...I'm not getting any younger and that usually means not any faster.  On reflection, I realized I'd need everything to line up well to get under that mark and today was the day; a friendly course on a cool day with fresh legs.  If I was to get it done, this was my shot.  The race quickly became competitive...with myself.

I saw DeeDee once more, she handed me a timely banana and it was time to focus for an hour towards the finish line. 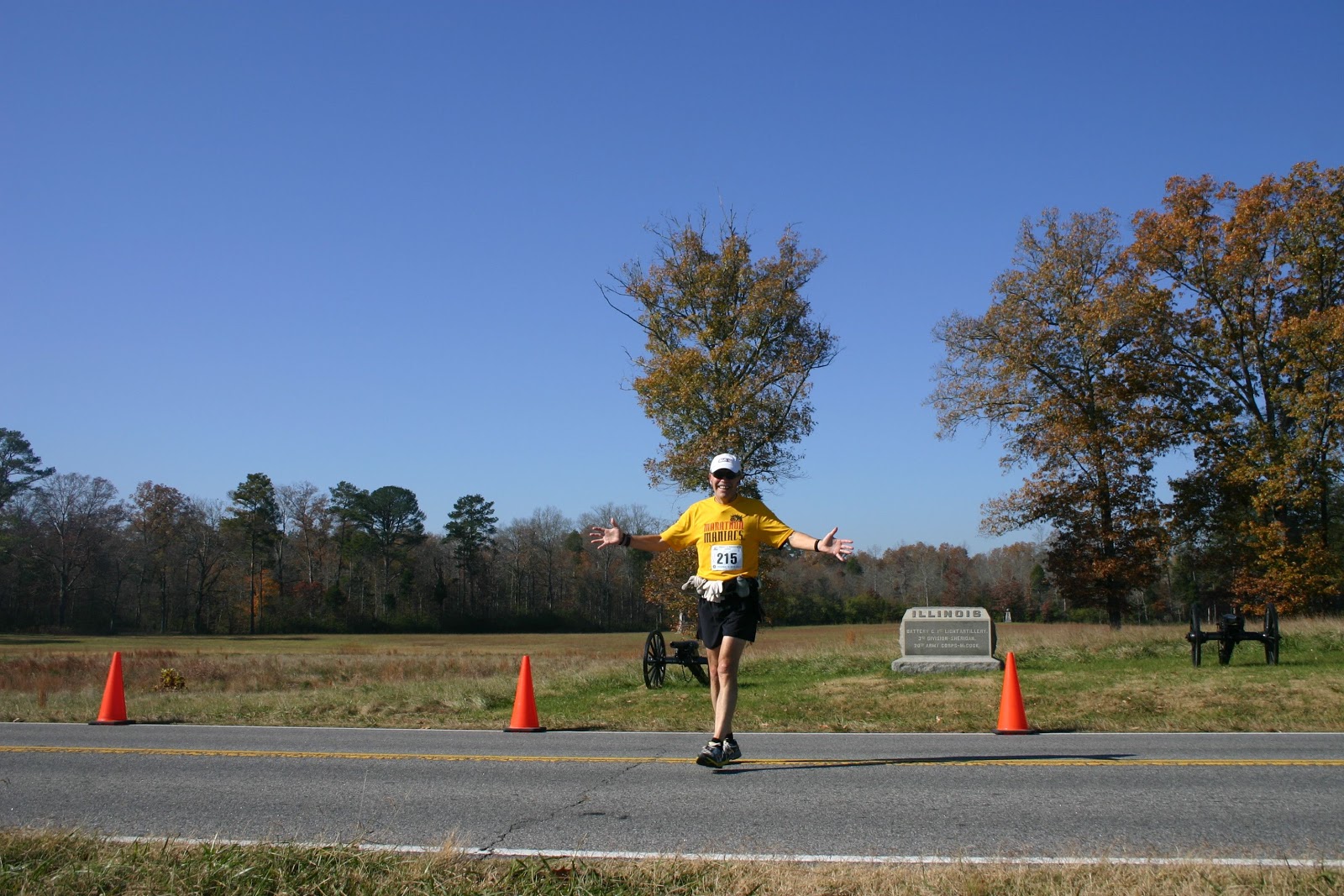 Mile 19-mugging for the camera, asking for a banana

Fine tuning the math as I moved along, I realized a 4:30 finish simply required me to hold the current 10:20 pace to the finish line.  So I stayed with the 4/1, conserving energy, knowing the Wall might hit but also knowing it didn't have to.  I also decided, if I felt good at the time, to run the final 2.2 miles if I could and, gasp, get well under 4:30 on this day on which conditions were all favorable.

And so it came about.  Miles 18-24 went smoothly.  I had only one twinge during this stretch in my left quad for about 30 seconds -- one walk cycle took care of that.  My last walk cycle came as I saw the mile 24 marker just ahead of me.  I turned off the beeper and leaned into the race, absorbing what was happening.  Mile 25 was fun, at 9:41, taking me to the point I could hear the loudspeaker from the finish line drawing us home.  I hit a little fatigue during mile 26 and it slowed me to a 9:52 but by that point I had only 385 yards to go, which clipped by at a 9:00 pace.  Marathon #33 was in the books. 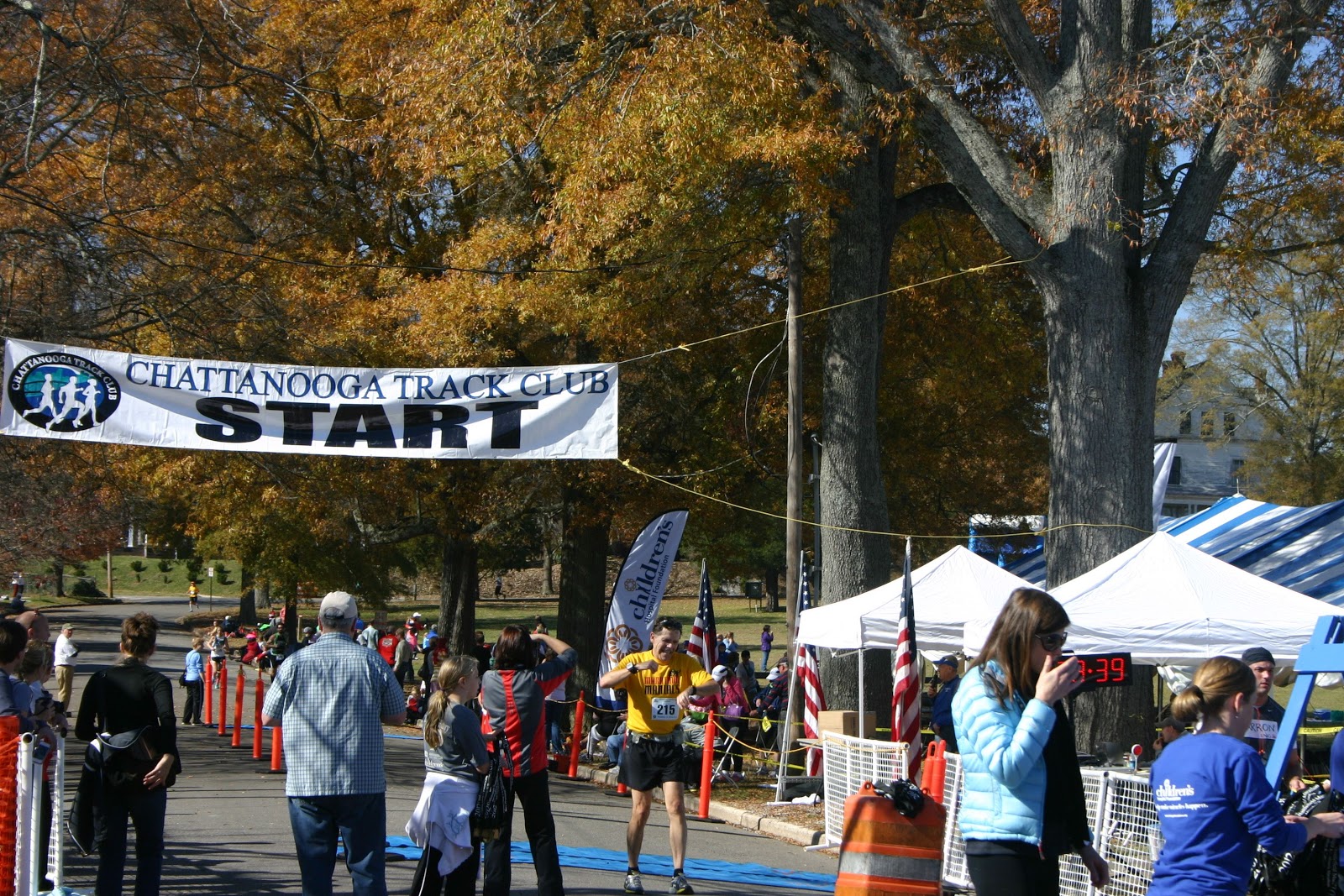 When I saw the time on my watch, it was a thrill. I appreciate DeeDee capturing my joy in this photo.  4:27:32.  Indeed, well under four and a half hours.  This was the second fastest marathon of this running era, bested only by the 4:21:01 in Portland in October, 2006.  And, I reminded myself, I ran continually in that race, wiped out my ITB and didn't run for nearly 4 months afterwards.

I should add that I did feel some ill effects from the effort.  I had some cramping in my feet and calves post race, which I had to walk off.  They did fade, as water, electrolytes and food helped.  But I have not seen even minor cramping during recent marathons in the 4:40-4:50 range.  Yet the cramps were worth it...I got under 4:30, the target that became visible with 10 miles left in the race.

We three amigos met up and basked in the now 60 degree sunshine.  There is something special about getting through such a physical task, sane, thankful for the privilege.  Even better to share it with friends. 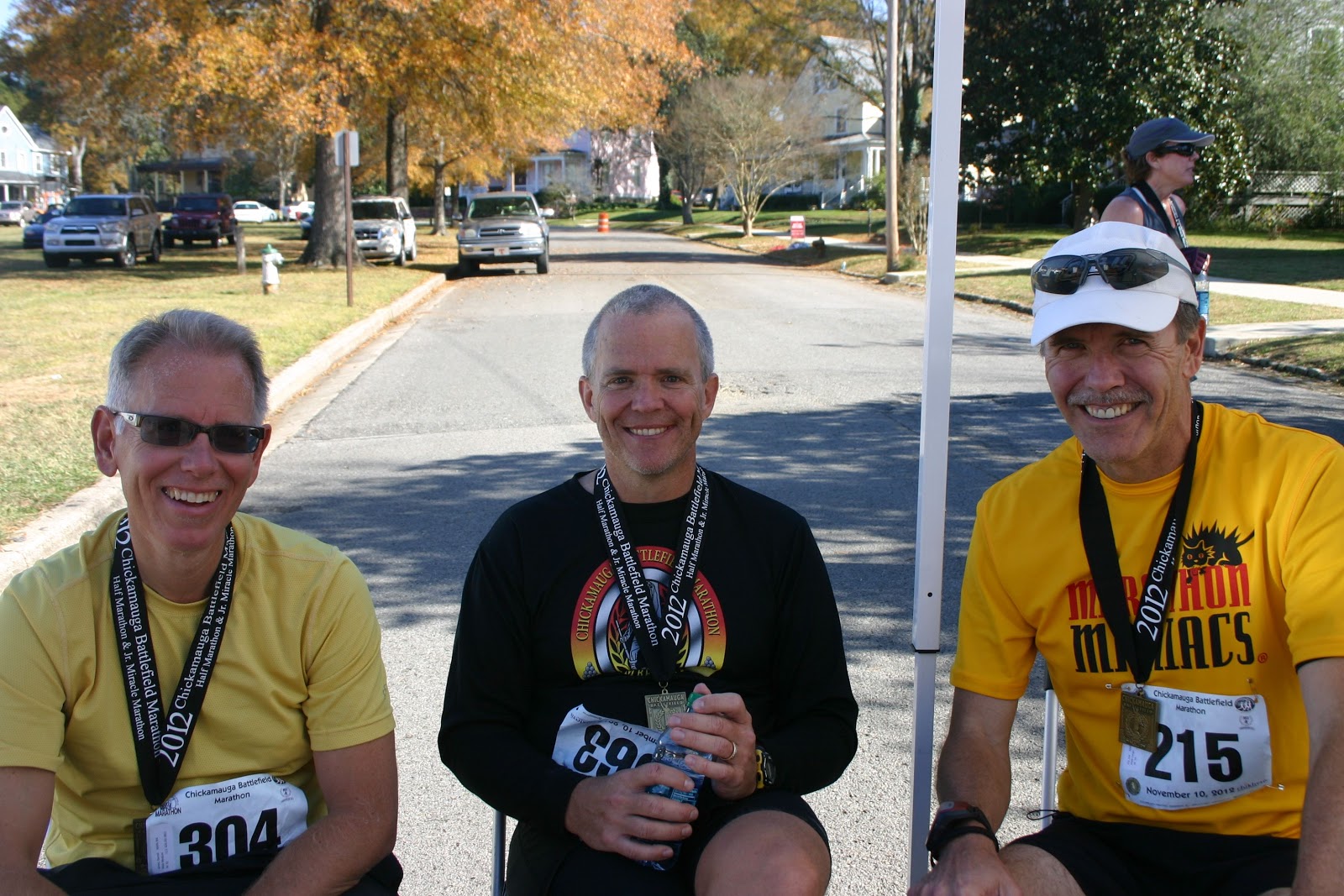 Thanks so much, Wes, for hosting us, DeeDee for tolerating these guys invading your life, and Darrell for being a pal.  It was terrific to be together.

Persevere.  And if you can do it with friends, all the better.

It was great to see y'all again! Hopefully, with Matthew graduating this year, I'll have more freedom to meet up with you guys for races in the future if you'll have me. Next year, I'm at a minimum going to give the 4 hour marathon another go, and at best, I may just get me one of those really cool yellow shirts!

ablutions? I'll have to go look that one up.

It's just so cool that you were able to go sub 4:30. I don't think it really hit me what a sweet victory that was for you on that day. What a great accomplishment. It certainly was great to see you so jubilant coming across the finish line.

Hanging with the two of you during the race was special, no doubt. I look forward to doing it again some day.

Man, I wish I'd been there. It sounds like it was a great reunion of long-time running blogger buddies. Scenery was awesome. Great photos.
And you did so well on time.
Congrats to all.

Fun times! Congrats on a solid finish and time. Looks like a scenic marathon too. :-)