Brief Summary:  What a wonderful weekend with my sister, brother-in-law and wife in the beautiful fall colors of western New York!!  It was a fabulous time to be together.  And, by the way, I ran a 5K with Anne and enjoyed the most excellently organized Wineglass Marathon as well!   Both races went marvelously yet the time with family was the best.   Lots of photos follow. 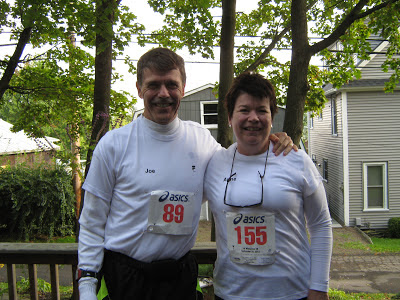 Last spring, my sister Anne invited me to consider running the 2012 Wineglass Marathon in Corning, New York.  She did so because a) she knows I like marathons, b) she and her husband Dan live just five blocks from the finish line of the race and c) she thought it was time enough for me to come visit them.  So I wrote back and added a fourth reason.  Anne began running herself last winter and I noted the organizers had added a 5K race the day before the marathon.  "How about you and I running the 5K together and it's a deal?"  We quickly agreed and the plan was set for a family get-together for no good reason other than simply being together and running.

Gretchen and I drove out on Friday and it was terrific to see Anne and Dan.  She had picked up our bibs for the 5K and my packet for the marathon, so we were set.  Friday night saw Anne and I fully engaged with race planning for our epic 3.1 mile journey through downtown Corning, including the necessary ritual of overthinking just what layers to wear for the low 40s temperatures predicted at start time.  This, of course, provided great entertainment value for our spouses.  Gretchen is quite used it but Dan found it particularly amusing to see "the two Ely kids" willingly throw themselves into such inane detail.

Of course, we had already started working on this detail months earlier.  One of our older sisters, the family historian, had found an old photo of Anne and me taken on her third birthday, which made me almost six years old.  Anne scanned it and had it put on the back of our T shirts...and here you can see the video of us donning the clever, matching shirts on race morning.


We then stepped onto the deck for the details of the shirt backs.  She always has been way cuter than me. 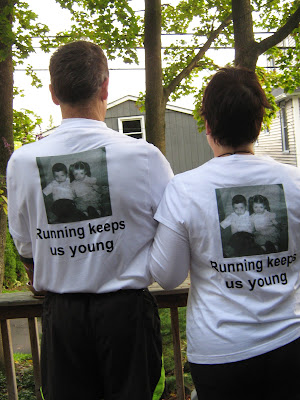 We walked to the start and it was so much fun for me to share a running event with my sister.  About 200 of us lined up to run.  Anne knew a lot of folks, since she and Dan are very involved in Corning community activities.  The gun went off and we found a 2/1 run walk to fit well for us.  We enjoyed the beauty of the morning and being part of what was a big sporting weekend in Corning.  Anne was also happy we weren't last.  Thus, it was a highlight at mile 2 for us to pass a mother/daughter duo, both much younger than us, even though the Mom was planning to BQ the next day in the marathon.  Shoot, she even looked fast...but we left them in our metaphorical, active-voice-loving, hyphenated-adjective dust.

There was a nice crowd at the finish line and Anne hit her target time, feeling good and enjoying the entire event.  What a treat this was!  Gretchen and Dan enjoyed watching the two of us enjoy this together...plus I suspect had more than a few chuckles. 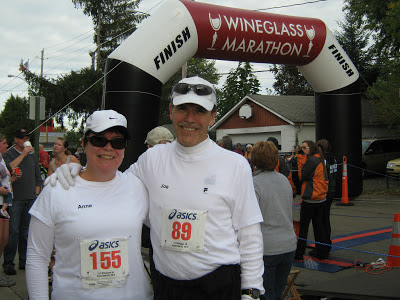 We walked downtown for a cup of coffee, ran into even more 5Kers and marathoners, which was cool for Anne to feel part of.  Saturday afternoon, we visited a museum near the start of the marathon in nearby Bath, NY, then drove the point-to-point marathon course on our way back to Corning.  I was thrilled with what I saw from the car...a very runnable, visually-appealing course.  Naturally, as is my custom when possible, I stashed a banana around mile 17 and another at mile 22.  More chuckles from the back seat, but, hey, I can deal with it.

Marathon race morning came after a reasonable night's sleep.  I slipped out of bed without waking anyone, fixed some oatmeal and walked to the buses parked at the finish line.  It was so cool to amble through the dark and quiet of an early Sunday morning...the proverbial calm before the storm.  I caught the second bus to the start line.  The ride out to Bath was enjoyable as such pre-race bus rides often are...the chatter of excited runners, comparing notes, some nervous, some quiet, some trying to wake up, some trying to calm down.  The start was kind of in the middle of nowhere but the organizers nicely arranged for a county truck garage to be open for us to stay warm for the hour or so before the gun.

The race started right on time and we were off.  Boy, I appreciate accurate and prompt start times.

My race strategy for Wineglass recognized this race was Part 1 of a two-part experiment;  could I run two marathons in seven days? I was scheduled to run the Chicago Marathon the following Sunday, October 7.  I'd never run 26.2 so close together.   How would I manage this race in order to enjoy the final three miles down Michigan Avenue in the Windy City a week later?

From my experience in May at the Bayshore Marathon, I decided to use a 3/1 run/walk through mile 16, then, if I felt OK, bump that to a 4/1, and then, depending on how I felt, running the last mile or, gasp, the last two miles, continuously.  The flat, net-downhill course certainly helped.  The most helpful thing, though was the weather; low 40s at the start, mostly cloudy, with no wind...doesn't get much better than that.

The early miles went well.  Had some nice conversations and, as usual, once past mile 5, the miles really started clicking by. 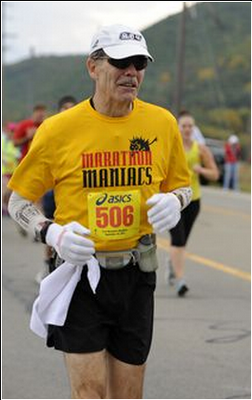 Before I knew it, we had passed the halfway point, with my watch showing 2:22:39.  I was pleased with that, felt fine, and kept the plan going.  Around mile 16, I had a marathon "first"--my phone rang and it was a work colleague back in Indiana calling with a question about a project in my area which she was organizing over the weekend.  I don't think I gave away that I was actually in Coopers Plains, New York running a marathon as we discussed the pros and cons of an equipment purchase unexpectedly required.  It's great to work with good people and I assured her she'd make a good decision and I'd back her choice.  I had a disappointment at mile 17--my banana was not to be found...but not a big deal...I stayed with my homemade "gu" and still felt fine.

At mile 18, I had a decision to make...do I uptick to a 4/1??  Evaluating from the ground up, it sure seemed like a good decision...this day was rolling out well.  I reset my watch, maintained my running pace at 9:45 on my Garmin, but doing more of it.  Predictably, my aggregate per mile pace dropped from the upper 10:40s to the lower 10:20s.  Not predictably, I found myself feeling better and better as the miles ticked off a little faster.  Whether psychological or physiological, I don't know but it was real.  My banana at mile 21 along the Painted Post Bike Path was right where I stashed it and provided a boost for me and entertainment for fellow runners and a few spectators.  A public service I seek to provide.

We were now into the outskirts of Corning proper.  Thanks to the course tour the day before, I knew right where I was in relation to the end.  I was still feeling good and, as I approached mile 24, I decided to turn off my beeper and run the rest of the way.  And, man, what a trip the last two miles were.  At mile 25, my watch showed a 10:09 mile, followed by 9:32 at mile 26, my fastest of the day.  We crossed the bridge nearing the finish line, under the watchful eye of Little Joe (no relation), and I was pumped. 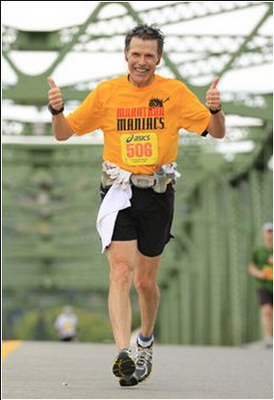 A final left turn onto Market Street awaited and the pace quickened.  I scanned the gathering crowd for my family and what a boost to see them. 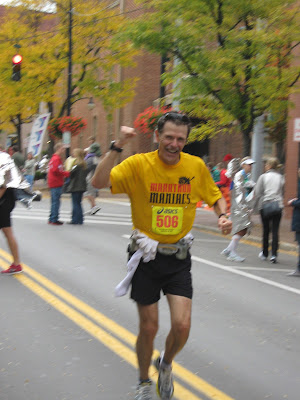 Anne was in full voice and full cowbell mode. 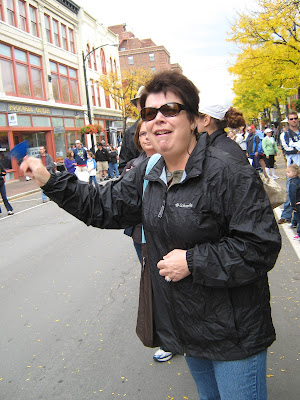 
And thus I crossed the finish line, grateful and humbled to have finished marathon #31,  doubly grateful to have had it happen in the midst of a beautiful creation and along with family. 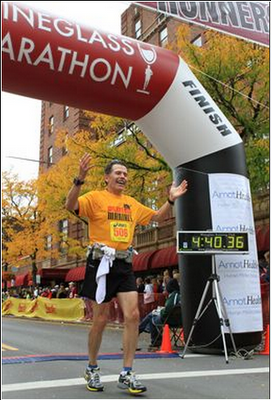 Epic stuff...I'm sure Al Gore would be honored.

After the race, I had a second conversation with Pascal Radley.  He saw me in the truck garage at the race start and introduced himself, which I appreciated.  Pascal ran a 4:02 at the Circular Logic Marathon (where I'm the RD) last March and we had great talks before and after the race.  He ran a 4:30 at Wineglass which was his 47th marathon during 2012. He said "I'm livin' the dream" and I guess so! 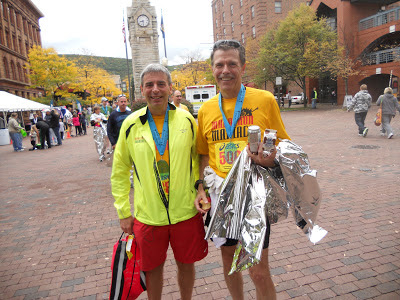 How cool to finish a marathon, then take a short walk to Anne and Dan's home to clean up and enjoy the rest of the weekend.  I had no blisters, no soreness, no pain; a marathon with no "wall"...it doesn't always happen this way but when it does, it is sweet.

As I said at the outset, the weekend was a wonderful time with family which happened to feature a very enjoyable marathon.  Gretchen and I headed home early Monday, as I shifted my running sights to the Chicago Marathon...would part 2 of the experiment blow up or would Michigan Avenue be kind?  Stay tuned.

Glad you handled the adversity of the stolen banana so well!!

But most of all glad that you and Anne could do a 5K together and have such a memorable week-end with Gretchen and Dan too.

Congrats to you and your sister! Loved the videos. No one looked as strong on the home stretch as you did! :)