The calendar year doesn’t really line up with my “running year”, as I enjoy winter running more than summer running. But, hey, using the term “fiscal year” for your hobby is a bit odd. So, a quick 2011 summary follows.

I was pleased with the year, completing three Ultras, four marathons, four half-marathons and a bunch of shorter events. Better, a touch of speed came this year, with PRs at the Half marathon, 15K and 10K distances and my best marathon time since my 2006 PR in Portland. No injuries, even better. And, as you can see from the annual mileage chart below, the best annual miles in this era of my running life. 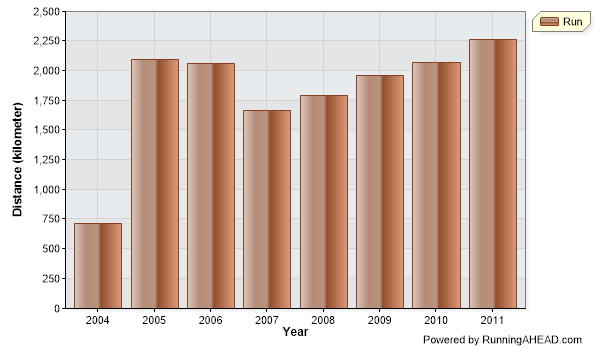 Why did running go well? At age 58, this isn’t supposed to happen, right? I’m not entirely sure. But one factor may well have played a key role.  This was the first full calendar year at my new lower weight. Whereas I had been in the 200-205lb range through 2009, I shed about 30 pounds in the middle of 2010 and held the weight between 175-180 for all of 2011. Cumulatively, that’s a lot less Joe to lug around. And I’m feeling great.

I’ll publish my 2012 plans in a bit. I’m looking forward to it but won’t be racing until the Kal Haven Trail 33.5 miler in late March.

A brief family moment as well, with two pics from the year. In May, our youngest son Matt graduated from Wheaton College. He was on an ROTC scholarship, so was also commissioned as a new 2nd Lieutenant in the US Army on that amazing day in May. Oldest son David, who was in the Army, was in the commissioning ceremony.


Middle son Nathan was able to be here for Christmas and here’s a photo of our entire family, with the exception of Lt. Ely, who couldn’t get off.


From the left: Gretchen, Nathan, Nathan, Berneice, Susan, David, AJ, and me. It’s quite a crew...we are deeply grateful for each.

Congrats on a great year. It is really cool to be our age setting PRs. I too think losing 20 pounds was a factor in my "speeding up" this past year. Happy New Year to you and your family.

Sounds like you had a great year.I can tell you from experience that dropping the weight makes a big difference.You have a awesome family, you should be very proud.Happy New Year and I hope to see you at the Rocket City Marathon this year.

Well impressed with your year at, if I may say, your age. I was 50 this year and would never dream of even trying to emulate you, so keep it up and all the best for 2012

Congrats on a great year! Hope 2012 is even better. Happy New Year!