Medals4Mettle: Letting Go to Lift Up

While preparing for the Illinois Marathon last April, I got a note from fellow Marathon Maniac and Illinois resident Scott Dahl, setting up a MM Photo Op for the event. In that communciation, I learned of an organization in which Scott is active. Medals4Mettle is based on a simple and compelling premise: Runners give their medals as encouagement to children fighting long-term illness.


When Scott explained this to me and after I looked at M4M's web site, it grabbed me. What a beautiful yet simple thing!! The group was started by a surgeon who is also a triathlete; he had a child as a patient, fighting a long haul disease and, somewhat spontaneously, gave the child a recently earned medal from a tri. He wanted to salute the "mettle" the child required to deal with the illness. The child was so pleased and so encouraged by the simple gift, he realized he had stumbled on to something. He began involving other athletes and the idea took form.


Scott described this and I realized I could easily be part of it. Over the years, I've placed medals and race bibs behind the door to our home office, below. It's a quiet, out of the way part of the house. 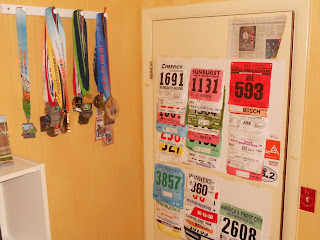 Yet for what reason did I need the medals? Did any local sports reporters clamor for the opportunity to photograph them? Did any family members stroll up to the room to marvel at my athletic prowess? Did I receive email requests for me to pose in front of them? Laughable suggestions, all. The only purpose they held was for some periodic reminisence. So, it seemed logical I could part with them for more noble use.


I knew this information in April. And I knew how I could send them to M4M. And I didn't take any action until now. Why?


At one level, I simply needed to get around to it. But there was a deeper, more self-absorbed reason which I had to acknowledge if I was to be honest. This was the real cause the four-month delay.


I liked having the medals. In some way, they gave meaning, identification. To look at them was to relive some day gone by. Keeping them was to somehow seek to cling to a moment which was done, over.


Years ago, I heard a quote I've never forgotten: "If you own something which you can't give away, you don't own it, it owns you." I realized the medals were starting to "own" me in some way. Not at the depth of control of the "precious" in Tolkien's Ring Trilogy, yet there was a cling. This realization both frightened me and spurred me to action.


It was a strange, yet good sensation to begin pulling the medals off their ribbons, one by one (M4M adds their own ribbon to each medal, so asks folks to send in medals without the ribbon). It was a healthy lifting of some strange attachment. The half-marathon medals, interestingly, were not a big deal to part with. But the marathon medals were. It took work to pull each one off its ribbon. I laid them all out on the desk and smiled. Each one had a special memory of a marathon which went well or terribly or alone or with friends. 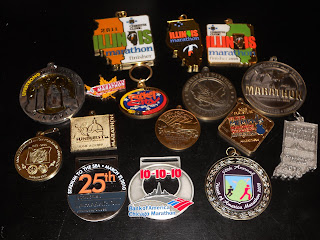 I ultimately chose to keep two medals; my first half-marathon medal at the Indianapolis Mini-marathon in 2005 and my first marathon medal of this era, St. Louis in 2006. All the rest went into the box. ﻿ 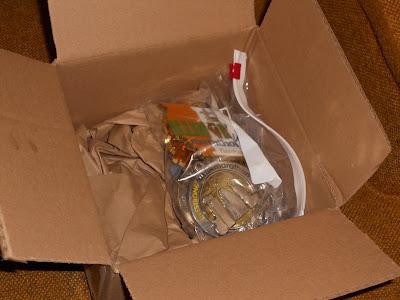 And it was fine to send 4.5 pounds of medals out the door. Shoot, I still have all the bibs. I still have all the ribbons, many of which are specific to a particular race. And, I pray, each of those medals will bring a smile and a bit of encouragement to a kid and his/her family facing a much bigger challenge.

If you'd like to be part of this wonderful and simple project, all you need to know is at the M4M web site. I'd like to know what, if any, mental process you might work through in so doing.

Persevere. The kids sure will.

That's so nice of you to give almost all of your medals! I've read about this org on a few other blogs. I'm not quite ready to give up my medals, not so much because I cherish them myself. I'm actually not very sentimental. I guess if I gave them away I'd want to do so personally. Not really sure actually. Anyway, I think the concept is pretty cool!

Joe, thanks for writing about M4M and donating your earned medals. You can also catch us at www.medals4mettle.blogspot.com

Thanks again, hope to see you at a fall race!

Joe, great idea, inspiring and thoughtful. You're right, the medals don't own us, and if they can do more good somewhere else, that's where they should be.

I remember meeting Scott in Illinois and coming home and reading about M4M. Even as I looked at the picture of your medals I can recalls those races that we did together. I'm not quite ready to part with mine yet, but I know that someday they likely end up in a trash bin with all the other stuff I collected. I know it's the journey and the "hunt" for them that makes them special. Congrats on gaining a bit of freedom.

great idea Joe! all of my medals are in my drawer :-) I'm sure somebody would love to have that 10th anniversary Disney medal....

What a small world. I was reviewing a run/walk pace calculator I downloaded a couple of years ago and noticed your name/blogspot on the bottom. After checking out your blog, I read your post about Medals4Mettle. Isn't Scott D. amazing?! I recently became involved in Medals4Mettle in St. Louis as well. Thanks so much for donating your medals to this wonderful organization. I also really like your quote about things that "own" us. Also, thanks again for sharing your wonderful pace calculator. It helped me qualify for Boston last year! Glad to know now who wrote it! Mary Ruth Casey

Call me possessed but time is forever and I'll let mine thrill some youngster at some future time when the medals don't push me out the door so persuasively.