One of the distinct benefits of preregistering for spring marathons is that it provides a clear reason to get out in awful Midwest winter weather to do the necessary long runs. Today was one of those days.

The week has been brutally cold. Weather we normally see in mid to late January has hit already. Snow. Single digit and below-zero temps. I had two runs earlier in the week doomed to the dreadmill...if anything is motivating to go outside, that sure is it. I was antsy to get out and go for a long run today, though. 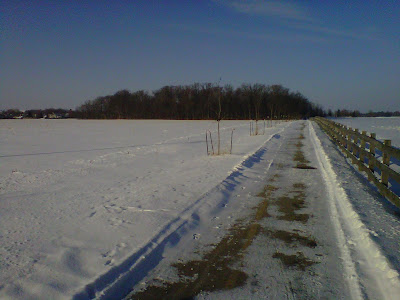 The run started at 14F and ended at a "balmy" 25F. I've discovered using hand warmers, polypro liner gloves and snowboarderdude mittens to be a decent combination to keep hands and arms warm. The run mostly just lumbered along. The footing was iffy...about 1/3 of the run was on snow pack, the rest on sorta dry pavement. I don't know if that contributed to my left IT band making noises around the 20 mile mark. That bad boy hasn't said anything for two years now.

The temps also triggered a new question for me. I've found eating bananas during a run to be much more enjoyable than packing gels. All fall, I simply stashed them along the route ahead of time. But how would they fare in this cold weather? I could not stash them the night before due to the temps, so I forward positioned them and extra water earlier in the morning. What shape would they be? I've seen frozen bananas come out of the freezer...none too appetizing.

Well, it seemed that the timing was OK but just barely. They hadn't fully frozen, though the skins were starting to darken. A bit "mushier" than I'd like but it worked. I also discovered I could peel a banana wearing snowboarderdude mittens as well...a skill I never figured I'd need but now have.

It's a long winter. But we persevere.

Email ThisBlogThis!Share to TwitterShare to FacebookShare to Pinterest
Labels: ITB

That is true perseverance, Joe.. I said I'd love to run in that once, but maybe ONLY once!

Great photo, though, and so typical Indiana!

bananas are good, but I don't think they have everything you need. could be wrong. I channeled my winter friends yesterday for my sub-50 degree run :-) brrrrrr!

Peeling bananas with mittens must have been fun. You do persevere up there in that weather. I hope it's not so bad for terribly long. It's been the coldest December I can remember, even here in F-L-A.