Meet up with Jeff Galloway in Portland

Moments after crossing the finish line at the Portland Marathon two weeks ago, I received my medal from a helpful volunteer and turned to look at the finish area, pondering the moment. I saw a runner who finished just after me, wearing a "Galloway Running" shirt. I greeted her, mentioning I used Galloway's methods too. 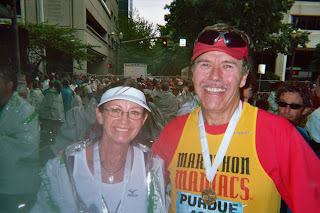 "Well," she said, "Jeff is right there," motioning to a man just a few feet away talking to someone.

The lady was none other than Barbara Galloway, Jeff's wife. And in short order, less than a minute after we both completed a marathon, I was talking with Jeff Galloway.

I've written extensively on this blog about my application of Jeff's run/walk methods over the past three years. I was surprised and thrilled to be able to tell Jeff himself of my appreciation for what he has done to help me and so many others. In fact, as I told him, it was an ITB injury I suffered at Portland 2006 that triggered my first use of his plans in early 2007. 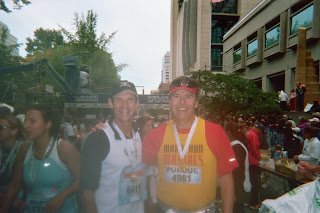 Jeff was very gracious to chat with me for several minutes in the amply supplied food area of the marathon (thanks for the white grapes and string cheese, marathon organizers!). We moved beyond my own experience, as I asked Jeff how his business was doing and how his seminars went at the Expo the day before. In one way, this mere conversation is testament to his training techniques; within 2 minutes of completing a 26.2 mile run, we were sane, breathing normally, speaking of broader issues...who would imagine that??

Jeff had some other folks walk up to greet him, so I got a photo with him, asked him to take the photo above of me with Barbara and I thanked him again. It was great to talk with someone who has done so much for running.

Later, I got thinking about what had happened. If Jeff finished the race just after I did, we must have run about the same total time. What run/walk plan did Jeff himself use? And what could I learn from this????

When I got home I pulled up the race splits for me and for Jeff. Sparing you the extra numbers, here is the cumulative race pace at each timing mat along the way for the two of us. (Interestingly, Barbara's splits were identical to Jeff's...they were together the entire race).

As described in my race report, my run went well through mile 18, when right knee issues slowed me down, evident in my paces. Jeff, on the other hand ran a very steady pace, and then accelerated over the last 5 miles. I ran a 3/1 run/walk. What did Jeff run? Same course, same day, virtually the same time...what was his running strategy? Could I learn it? Wouldn't it be interesting to compare??

So I emailed Jeff and simply asked him! The email found its way to him and he graciously answered my question. He told me he wanted to run a negative split so ran a 1/1 run/walk, through mile 23. Yes. He and Barbara ran one minute and

walked one minute. For 23 miles. From that point, they ran continuously the rest of the way, getting the negative split Jeff wanted. Arm in arm at the finish line.

And, that's when I saw both of them...calm, happy, conversant. Romantic even, in a running sort of way.

What to make of this?? Why do I subject my readers to such arcane analysis?? In his books, Jeff repeatedly makes the point that seemingly severely slow run/walk ratios work wonderfully well for recreational runners, allowing folks to lower the risk of injury and keep a steady pace for long distances. Jeff obviously follows his own advice, enjoys traveling with and running with his lovely wife and is happy to help others do the same.

His advice has been a huge help to me for three years now. He "walks the walk" (pardon the pun) and has been very gracious to so many, many runners. It's worth noting, even to this sort of detail.

Email ThisBlogThis!Share to TwitterShare to FacebookShare to Pinterest
Labels: Galloway

great post. I've run/walked since I started running three years ago. But, I never got the fact that you should start it before you get winded.

I probably had close to 200 walk breaks in my last marathon. A marathon I didn't think I could finish. But, I did.

Gallowalking is a great way to finish a marathon. Thanks for letting us see your splits next to Jeffs.

Interesting story! I saw Jeff at the expo but didn't talk with him. If I can build up my miles again I'll have to consider the run/walk. I've used it in the past so I know it works, but have also had success without it.

Really interesting analysis, Joe.. I'm intrigued at how he was able to finish in the time that he did using a 1/1. I'd love to know what his run paces were.

I'm keeping an eye on Chicago registration dates.. Been noodling around with the idea of tackling New York in '11... lots of time to decide, though.

Your side-by-side with Jeff doesn't make sense. Yu look like you beat him split for split by 2.5 minutes. Is there a typo?

Nevertheless, it was fantastic for you to meet up with the Galloways on this occasion. I would probably be even more committed to his race plan, if I'd actually met the master under such circumstances.

I have met him and you know we have different ways of getting to the same place. It just makes you wonder if you'd get farther trying it the other way.....

Did you tell him you met him at Rocket City too? That's where he passed me in the twentieth mile doing the run 1/walk 1 thing...

Like David, the numbers don't add up for me. You had a faster pace at every split except the last when you matched Jeff almost exactly. He ran in the 11:00's the whole time so how did he finish near the same time as you. The answer is probably so simple I'm just not seeing it, but if you were running faster then Jeff early and in the end only slowed to his steady pace, what gives?

p.s. the word verification is dingo
(just strikes me as funny)

Thanks for the post. I just stumbled onto your blog, googling a run/walk pace calculator, and found your nifty excel sheet. I'm still contemplating on doing a run/walk for my half marathon in May (second one, after a six-year hiatus!) or even using it to do a marathon! I trained for my first half running straight through the race, clocking a 2:16 finish without a single walk break. I'm just curious if I could actually break that by incorporating a run/walk. Your spreadsheet suggests I'd have to pick up the pace to achieve sub-2hr!!

Will continue reading more of your posts to learn from your experiences using Galloway's method. Thanks again! Cheers!

I started running about 3 months, am considerably overweight and just wanted to run 5k, 3 times a week.

However I now have the bug and entered the Stockholm Half marathon. I read Jeffs book this week, it sounds logical. I went out running tonight and psychologically I find it hard to stop running and walking....