We just returned from a three-day mini-vacation to South Haven, Michigan, celebrating our 34th wedding anniversary. This little vacation spot, long an escape destination for Chicago residents tired of the summer heat, is right on Lake Michigan and has the usual sets of shops, restaurants and sun-catcher emporiums. Yet, this trip also gave us some surprises.

It started on Monday when we went to our car, parked in a city lot, and noted, one car over, this tricked-out customized Cooper Mini with a giant can of Red Bull Cola on the back. 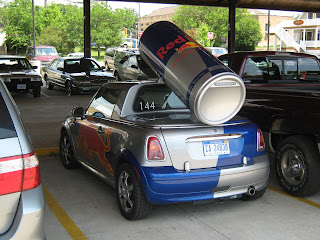 Had to have a photo...my blogging mind was already whirring. At that point, much to our surprise, up walked the drivers of the car, the Red Bull Girls. 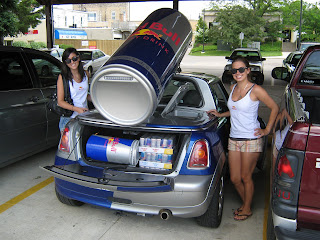 So what kind of a summer job is this? I ask. "Oh, we just go where people are and hang out and talk about Red Bull" said one of them. Sure beats flipping burgers, I suggested. "Well, yes, but it's really a very important public relations job. And it was an extensive interview process," she intoned seriously. So, maybe it was. They gave me a free can of Red Bull out of the car's built-in ice chest. Later, my wife dryly suggested that being a Highly Attractive Female Person was probably also part of the job requirements.

Later, Monday, we went out for some ice cream at a famous South Haven parlor. Dominating the roof line was a big Blue Cow. 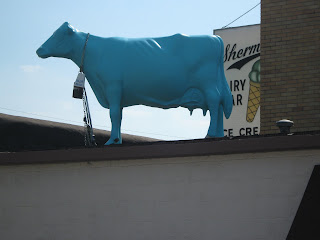 Given what we'd seen so far that day, we got thinking; If a Red Bull and a Blue Cow got together, to what would they give birth? And, later that evening, in a shop window, we saw the "offspring." 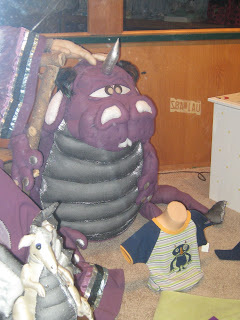 It was fun to be away, to talk, to read, to run, to relax, to celebrate. And we were reminded of the joy of such deep companionship Tuesday evening. Standing on the end of the pier in Lake Michigan, watching the sunset, I noticed a young couple doing the same, oblivious to all others around them. 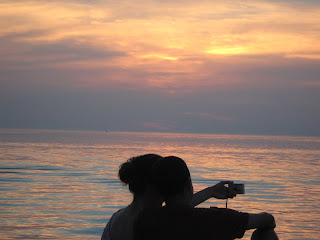 May they enjoy a long, wonderful life together as we have.

Love the purple offspring, too funny!

I've seen a Red Bull Mini Cooper running around town here as well, but I've never had the opportunity to meet the public relations associates up close and personal the way you have.

That's pretty cool! You guys have the best time together :-) I hope this young couple can do as well as y'all too.

p.s. I noticed all Red Bull chicas are HAWT too ;-)

One of my favorite things to see is the joy and love of long term marriages. You can see it in the laughter, in the looks given back and forth, in the "reading of minds" and finishing of sentences, in the shared secret jokes, in the dovetailed opinions, in the warmth of the home. I haven't met your wife, but I suspect that if I did, I'd see all of the above. Congrats on a long and successful marriage!